Bestselling crime writer Sophie Hannah loves to celebrate slights and betrayals (even those from decades ago). Far from feeling guilty about her grudges, here she explains why they are so beneficial.

Many years ago, I was invited to speak at a literary festival. I was thrilled to be there – but that warm feeling quickly evaporated when the organiser told me that he’d only invited me because I was cheaper than the author he really wanted. I still remember the anger I felt – I very nearly walked away. 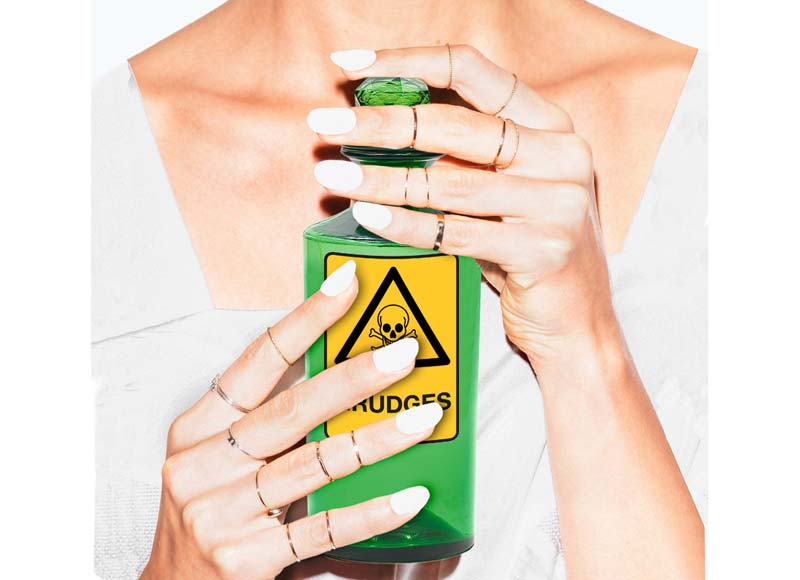 This is one of my many grudge stories, and it now makes me laugh whenever I think about it. So what do we mean by a grudge? The Oxford Pocket Dictionary defines it as a persistent feeling of ill will or resentment, which sounds pretty miserable. No wonder many of us try not to keep grudges, or deny that we do. ‘Oh, I’m not one to hold grudges,’ we boast.

Me? I have loads of grudges, and I love and value them all. None of them includes feelings of pain or rage. It’s true that the initial incident might have caused me to feel those emotions, but holding on to a grudge does not have to mean holding on to negative feelings.

I’ve been a collector of grudges since I was a child and I swear they’ve done me nothing but good. For example, in the 1980s, a schoolfriend, Delia, allowed me to take all the blame for our smoking in a classroom. She heard me own up but when the teachers asked her if she’d also been smoking, she lied and pinned all the blame on me. It felt like a betrayal.

I have a grudge about this – a grudge about Delia, though not against her. It’s important to make that distinction, because a good grudge should never be used as a weapon against anyone, even in the privacy of our own minds. We should not wish the person who sparked the grudge ill, but nor should we forget.

For a long time I felt guilty for having my grudge about Delia. Then a couple of years later she did something else grudge-worthy. For several months she encouraged me to pursue a boy I fancied and told me to invite him to a party that was coming up. I followed her advice – and the moment said boy arrived at the party, Delia snogged him herself!

That was when I saw the light and allowed myself, officially, to have a grudge about Delia, and that grudge helped defend me against possible future hurts. It was a beneficial thing. Indeed my own personal definition of a grudge is this: a story involving a negative experience that feels important to remember because it still has relevance.

When we let ourselves feel guilty for having angry feelings that are entirely justifiable, those negative feelings become much stronger. Instead, if we accept and welcome our anger and allow ourselves to change our thoughts, feelings and behaviour in relation to an incident or person, then our negative emotions pass more quickly.

This totally worked in the case of me and Delia. I gave myself permission to behave differently towards her – to stop confiding in her and trusting her and to spend time with her only when it was unavoidable. From that point on, when Delia did something treacherous I wasn’t hurt by it, because I hadn’t expected her to behave better. This meant I no longer felt under threat and was therefore less bitter. That’s right – holding a good grudge in the right way is an aid to forgiveness, not an obstacle to it.

So how can grudges truly be a force for good?

Often when we find we can’t get over a grudge it’s because a voice inside us is whispering, ‘But that person betrayed me and if I forgive them and move on, it’s as though their terrible treatment of me never happened or didn’t matter.’ It’s like when you see bunches of flowers attached to a lamppost by the side of a road and you realise someone must have died there in a traffic accident. Those flowers are saying, ‘Something happened here and that thing matters.’ We often say, of historical or public atrocities and tragedies, ‘Never forget’. That is what our grudges do, too: they commemorate what happened and tell us that our mistreatment and pain are significant and should be acknowledged. It really matters when people treat us badly and we have every right to our inner commemoration of what happened, in the form of a grudge. Take that person who told me he invited me to the festival because I was the cheaper option. That grudge reminds me that this level of rudeness is simply not OK and that I – and all of us – deserve to be treated better.

If someone set fire to your house and your beloved pet hamster died, you would expect the arsonist to be found guilty in court and given an appropriate sentence. But often the kinds of things we hold grudges about are not serious enough to be put before a judge. By creating and keeping our grudge, we can feel as though we have secured some small measure of private justice for ourselves. We will think and behave differently in future and therefore life will not go on as if the grudge-sparking incident never happened or doesn’t matter. It matters to us, and that’s what the grudge means.

Grudges teach us how we do and don’t want to be treated, and show us what our deepest values are. When I was eight, I wrote a poem for a school competition. My teacher said it was too good to be the work of a child my age and that I must have copied it from somewhere, so she refused to enter my poem in the competition. That incident, and my story about it – which is one of my favourites in my grudge collection – taught me that figures of authority aren’t always correct or fair and that the ‘innocent until proven guilty beyond reasonable doubt’ principle is essential to a just society. I was inspired by my teacher’s behaviour to write even better poems and win more significant competitions.

Once you have commemoration, justice and inspiration sorted, you will usually feel that you can afford to forgive – that you can let go of your anger and resentment so you don’t feel churned up inside any more. Good grudges offer a learning opportunity, symbolic justice and protection. Your grudge story preserves the memory of how your grudgee behaved, and so now you can avoid similar situations in future. This means you can move on without clinging to negative feelings. I am hugely grateful for all my grudges. They have taught me so much about how I do and don’t want to behave. When I create a grudge about someone who has been rigid and inflexible, it reminds me that I always want to be open-minded and adaptable. When I see people on Twitter getting aggressive and sweary in response to the mildest expression of disagreement, I resolve always to disagree in a friendly way if I have to disagree at all.

We can and should enjoy our grudges. A lot of them are hilarious! Via our grudge stories we can celebrate the absurdity of much of our experience, which can help us deal with whatever life throws at us. One of my former neighbours used to react with great fury if anyone parked their car by the side of the road outside her house. It was a public road and anyone was allowed, legally, to park there. My neighbour did not own that section of the road. Yet she seemed not to realise this and would run out of her house and verbally savage anyone who tried to park in the spot that she wished was officially hers. Once you realise that human beings are capable of such absurd behaviour, it can help you to take life, other people and yourself much less seriously.

When friends guiltily share their grudges with me, I advise them to write them down. Writing out our grudge story – working out how best to tell it, what the crucial elements are and what the moral of the story is – helps us to stand outside our experience and to be objective observers instead. This degree of detachment inevitably results in the weakening of any strong negative feelings towards the original incident. I also encourage people to grade and classify their grudges according to a system I’ve created: a one-carat grudge is a relatively weak one where the person might not have meant to do you any harm; a ten-carat grudge is very powerful and will probably involve some level of malicious intent on the part of the grudgee. Classifying and grading your grudge helps to provide distance and perspective on the upsetting and annoying stuff life throws at us.

As long as we hold grudges responsibly they can be great. Recognising that you can be the grudgee of someone else’s grudge is also useful – we’re no more perfect than anyone else. We, too, will upset and offend people.

Think of it this way: every grudge we hold is a clue to something, a message our experience is trying to convey to us. If we try not to hold grudges, we’re turning away those clues when we should be using them to solve the mystery of how we want to live, think and feel.

So next time you feel a grudge brewing, welcome it with open arms. It might have a lot to teach you and could truly enhance your life.