We’ve all heard of extroverts and introverts, but should we be aspiring to a middle ground between the two? Kerry Potter investigates the ambivert. ILLUSTRATION: LISA SHEEHAN

Within our social circles we all have the party friend who’s always first on the dancefloor and the shy one who has to be dragged under the glitterball to shuffle self-consciously. Extroversion and introversion will also have cropped up in psychological tests for job applications, or betting on which colleagues will blab on endlessly and which ones will remain mute in work meetings.

We tend to see extroversion and introversion as shorthand for being either loud or quiet, but researchers believe a more accurate definition involves how someone responds to stimuli. Extroverts are energised and galvanised by outside stimulation while introverts – although often perfectly capable of being around people and noise– need solitary time to recharge and regroup.

Ambiversion, meanwhile, is the middle ground between the two extremes – and a new buzzword in this area of research. Karl Moore, a professor of management, who works at Montreal’s McGill University and Oxford University, has written a forthcoming book, We Are All Ambiverts Now, based on interviews with 450 CEOs about their personalities and leadership styles. ‘In today’s complex, uncertain environment, senior leaders increasingly need to act like ambiverts – that is, someone who can behave like an extrovert at times and an introvert at others,’ he says. 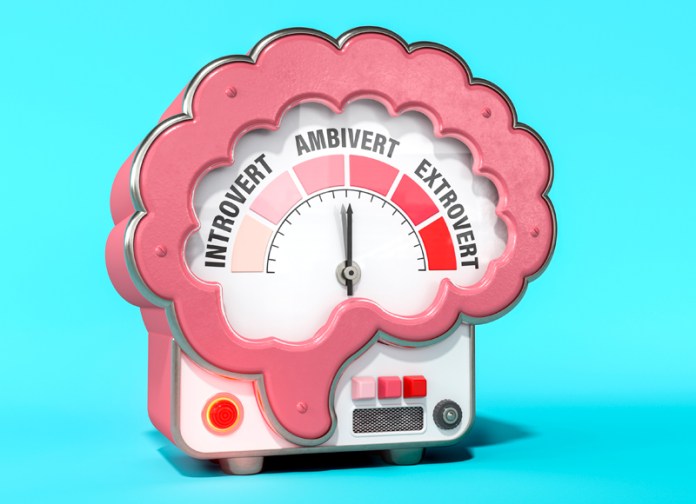 Understanding how people tick and adapting your own behaviour accordingly can lead to greater success and happiness in a variety of settings, says Moore – it isn’t something solely applicable to captains of industry: ‘It’s about enhancing relationships, friendships and interactions within your local community.’

Anyone can hone their ambivert skills and find that hallowed middle ground. ‘Everyone likes to think they’re an ambivert,’ says Moore. ‘Every CEO I’ve interviewed claims they are, but that’s not statistically likely. Introversion, ambiversion and extroversion occur on a bell curve, with about 40 per cent of people more on the introverted side, about 40 per cent more on the extroverted side and about 20 per cent genuine ambiverts.’ Many world leaders, he says, are – surprisingly – introverts, but they’ve practised deploying extrovert qualities. Becoming comfortable with public speaking is an example that comes up a lot. ‘Barack Obama is an introvert. Justin Trudeau is, too. He has had to learn to act like an extrovert when necessary. And at weekends he takes “introvert breaks” to refresh – long walks by himself.’

The term ambiversion was coined in the 1920s but barely used until about a decade ago. Susan Cain, the author of bestseller Quiet: The Power of Introverts in a World That Can’t Stop Talking, mentions it briefly in her TED Talk (the irony of an extreme introvert forcing herself to do a TED Talk isn’t lost on her). US psychology professor Adam Grant writes of the ‘ambivert advantage’ in  a 2013 study that pinpoints the characteristics of the best salespeople as knowing when to stop the hard sell (extroversion) and listen to the client (introversion).

Western culture in the 20th century largely favoured the extrovert – this was the age of the celebrity, the cult of personality, open-plan offices and desk-grouping in schools enforcing team collaboration rather than individual reflection.

But times are changing. The pandemic has been a relatively good time to be an introvert, especially for those who can work from home. However, says Moore, ‘Two years in, even introverts need some human contact.’ There is a balance to be struck between the two ends of the scale. So here’s how to sharpen your ambivert skills…

PLAY TO THE WHOLE TEAM AT WORK

Have you ever worked in an office full of extroverts? I have and it’s exhausting (and I say that as a loudmouth myself). In every meeting, we’d all shout over each other. I’d consider it a win if I got to finish a sentence. The problem is, when a boss is building a team, they don’t tend to think about diversity in terms of personality types – after all, it’s not something you can ascertain at an interview. So we have to work out how best to interact with our colleagues.

It can be fruitful to think about them in terms of extroversion and introversion. ‘If you need to talk to your manager and they’re an extrovert, you may be able to just turn up at their desk and grab them for a chat,’ says Moore. ‘But if they’re an introvert, it might be best to send them an email asking if you can speak to them at a specific time later in the day. This gives them a clear timeframe to reflect and consider.’

Being an ambivert is closely linked to empathy, says Annie Auerbach, author of Flex, a book about thinking, living and working flexibly on your own terms. ‘In meetings, read the room – if there’s a lull, you can throw in loads of ideas to get people going. But also understand there may be people who often get talked over and they need space and time to speak. It’s about being empathetic.’

Be sure to take a mental break, though, says Moore, because acting like an extrovert when you’re an introvert, and vice versa, is tiring. The professor is an extreme extrovert so while alone at home writing his book for hours on end, he would take ‘extrovert breaks’ to recharge – wandering outside to chat to his neighbours. Conversely, one friend, who headed up a team of hundreds, would regularly stare down the barrel of days packed with hours of back-to-back meetings. Finding the constant stimulation draining, he reduced each meeting from an hour to 50 minutes and spent those precious ten minutes alone, popping out to buy a coffee or even hiding in the toilet so he didn’t have to speak to anyone. Not the most fragrant way to refresh, but it worked.

LEARN TO COMPROMISE IN RELATIONSHIPS

‘Opposites attract,’ as renowned philosopher Paula Abdul once sang. Moore agrees: ‘Introverts tend to marry extroverts and vice versa. To be a good spouse you have to consider the other person’s needs, while making sure your needs are met too.

‘My wife is an introvert and, when she comes home from her teaching job, she’s exhausted,’ he continues. ‘So if I want to go out on a Friday night, she probably won’t want to go to a busy place, but she will consider a quiet pub. So that’s the compromise. And at parties, I accept she may want to go home early and she gives me permission to stay and work the room.’

It also makes sense to think like an ambivert if you’re dating. ‘One of the most powerful leadership skills today is listening – something which an extrovert needs to take into account. It’s also good behaviour when dating. It’s attractive when someone listens attentively,’ says Moore. This applies to platonic relationships, too – if you’re meeting an introverted friend, you’ll probably both have a better experience if you go out for dinner à deux rather than to a big party. ‘If you can change your behaviour to align with theirs, it makes you a better person in terms of interpersonal relationships,’ says Moore.

FIND YOUR MOST PRODUCTIVE TIME OF DAY

Knowing how and when to best deploy your extrovert or introvert side can be helped by understanding your personal circadian rhythms, says Auerbach. ‘If you tap into this, you know when during the day you will perform best in an extrovert or introvert environment. If you are a morning lark, for example, you will have more energy and dynamism in the mornings – this is the time when you can do your most collaborative, extrovert work. Then when you slump in the afternoon, you can focus on routine work, emails and admin – tasks that mean you don’t have to interact too much with other people.’

The opposite tends to be true for night owls, who are more energised later in the day. Plan your schedule in accordance with your energy levels and you are likely to perform better.

You may also have a better month if you take into account your menstrual cycle (if you still have one) and harness its ebbs and flows. ‘In the first week of your cycle you tend to be more introverted, antisocial and want to retreat – maybe you can flex your work and social schedule to allow you to do that,’ says Auerbach. ‘Similarly, mid-cycle when your energy is rising, you’re more naturally extrovert.’ So if you’re throwing a party, that is your moment. Just be understanding if you catch anyone hiding in the toilet.

YOU’RE AN AMBIVERT IF…

* You enjoy the office party, but love going home. Ambiverts are like light switches – when they’re ‘on’, they seem as sociable as anyone, but without warning they can suddenly crave quiet.

* You are not easily distracted. Ambiverts are better than extroverts at staying focused on various tasks.

* You’re flexible. Ambiverts know how to be outgoing when the situation demands it and when to listen carefully. This also makes them very persuasive.

* Making decisions can feel exhausting. For example, introverts might be able to recognise that choosing not to go to a party is the right move for them, while ambiverts can spend more time debating what to do.