To my left is a magnificent lion standing regally at the centre of an African landscape. To the right crouches a beautiful leopard, while in the distance a cheetah lies sprawled in a tree. This is not, however, the Serengeti plain. Nor am I watching these creatures through the lens of a camera in the bush.

I am, in fact, in the US – thousands of miles from their natural habitat – under the gaudy neon lights of a convention centre in Reno, a casino town in the Nevada desert. Here the natives are paunchy Americans and their camouflage-clad wives who are sipping cocktails at 9am while plotting their next hunting safari. The animals around me are stuffed and lifeless, victims of one of the world’s most senseless hobbies.

I am here for the Safari Club International (SCI) convention, the world’s biggest gathering of trophy hunters. I have been interested in conservation for more than a decade. I’ve done everything from vaccinating wolves in Ethiopia to making a documentary about the illegal bushmeat trade of gorillas and chimps in Cameroon. But in November 2017 I decided to take direct action after the Trump administration announced plans to lift the outright ban on importing elephant kills to the US. Although approval is still on a case-by-case basis, it effectively means these animals can be butchered, stuffed and hung on ranch walls. So I started my own foundation, Preserve Our Wild, to highlight crimes against wildlife, and this is what has brought me here today.

Billed as a ‘hunters’ heaven’, this event sees 20,000 people from more than 100 countries flock through its doors over four days. More than 800 exhibitors peddle everything from the latest guns and wolf skins for little over £100 to week-long trips that offer the chance to kill a rhino for somewhere in the region of £100,000. Within minutes of entering the conference centre, I’m offered a ten-day stay at the Okarumuti Game Lodge in Namibia where I could hunt eight different animals, including a zebra and a giraffe. A snip at £13,326. Nadia Savoldelli, the Okarumuti Game Lodge representative at the show, adds conspiratorially that: ‘This is the only place you are going to be able to kill a Hartmann mountain zebra. 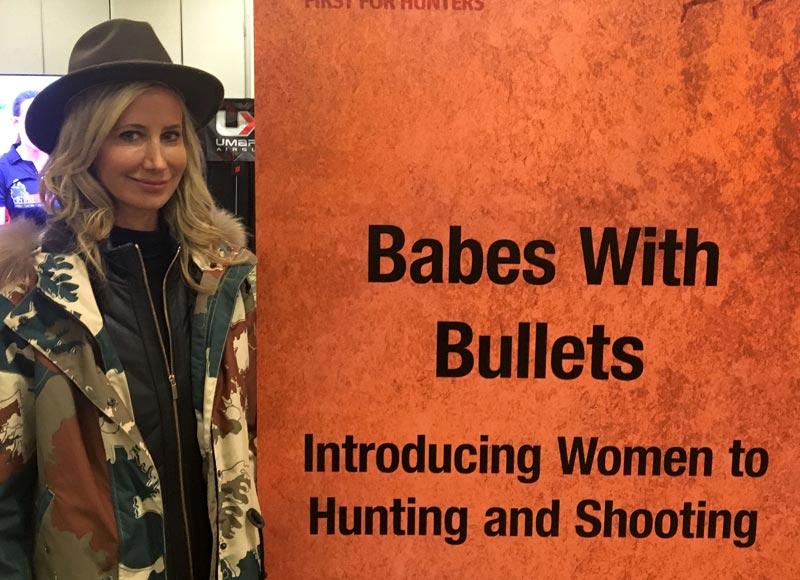 You may have seen pictures of these ‘safaris’ on the internet, featuring people grinning broadly while holding up the head of some of nature’s most extraordinary, and rare, creatures. Indeed, most of those I spoke to at the convention dreamed of bagging ‘the big five’ – an African elephant, black rhino, Cape buffalo, African lion and African leopard – and were willing to pay up to £100,000 for the privilege. And it’s all completely legal. Despite pressure on the UK government to ban trophy-hunting imports of endangered species after 74 rare animal body parts were brought into the country last year, the law has yet to be changed.

The SCI has more than 50,000 members worldwide. Most of those here today are white men dressed in camouflage hunting gear. Most accents are American, but I also hear Russian, Spanish and Italian. Some brag to me that they are ‘the messengers of death’. The one thing they all bond over is the thrill of a kill. What surprises me more are the women and children – babies in camouflage onesies; toddlers gazing in awe at guns bigger than they are – who are here, albeit in smaller numbers.

What was traditionally a rich white man’s sport has seen increasing numbers of women flocking to pay £90 to kill a baboon or £2,940 to gun down a giraffe. ‘In many ways women are the perfect hunters,’ Nadia told me. ‘They typically don’t have as big an ego as men and are more patient.’

Gun camps with names such as Babes with Bullets encourage women to join. Over the past few years a record number of women have joined the organisation. And who could forget the pictures of American hunter Tess Thompson Talley posing in South Africa last summer after killing a giraffe during a hunting holiday? When her posts caused widespread outrage, she attempted to defend herself saying the giraffe wasn’t rare, had been old and she was simply participating in ‘conservation through game management’. Even Prince Harry’s ex-girlfriend Chelsy Davy, whose father is associated with a hunting safari in Zimbabwe, has been spotted at SCI conventions.

Among the stalls, I spot a US-based camp called She Hunts, which offered a special Mother’s Day discount last year. Set up three years ago to teach hunting skills to women, it has doubled in size every year since, and camps get booked up months in advance. ‘Women listen, recognise the guides’ skills and follow instructions. Men are more governed by their egos,’ co-founder Shannon Lansdowne says. ‘I’ve hunted all my life and the thrill of the kill never goes away. When you pull the trigger and know this beautiful animal has given their life for you it is an emotional moment.’

She Hunts, along with many other hunting companies, peddles the same message that the slaughter is somehow necessary in the name of conservation. I was told repeatedly that money earned from hunting safaris funds preservation, that older animals need to be culled and that, thanks to the millions of dollars raised through legitimate hunting safaris, the economies in poor African countries are bolstered, creating a regulated environment where endangered species can thrive. Yet a report by Washington’s House of Natural Resources Committee in 2016 found that there was little evidence of the money being used to help threatened species such as lions, rhinos and leopards. Instead, corruption and poorly managed wildlife programmes take it all. The report reached the damning conclusion that trophy hunting may be contributing to the extinction of certain animals, including elephants.

At a stand for Charlton McCallum Safaris, I watch a horrific video showing an elephant hunt. Two men appear to shoot randomly at a herd of elephants charging towards them as an elephant drops to the ground. ‘We only kill the older male bulls and the ones that are causing a problem for the rest of their herd,’ one of the men on the stand tells me. But studies claim younger elephants depend on their elders to teach them to forage and ‘raise’ a family. Dan Bucknell, executive director of Tusk Trust, an organisation that protects African wildlife, says: ‘Elephants are highly intelligent, social and emotional animals that are known to mourn their dead. Killing any individual is traumatic for those that remain, while shooting older herd members removes decades of ecological knowledge and social experience that is important for the herd. Far from being past their prime, the older males  that get targeted are often the prime breeders and leaders in male society; younger males become more aggressive when they’re not around.’

There are hundreds of hunting trips advertised here, with names such as ‘The Grizzinator’ and ‘Blazin Hot Guide Service’. How much you spend depends on what you want to kill. When, at one stand, I enquire about rhino hunts, I’m asked whether I prefer white or black. The rare subspecies of white rhino is critically endangered after the poaching crisis of the 1970s and 80s. The southern white rhino is classed as ‘near threatened’ while the black and Sumatran rhinos are also critically endangered. Yet a trophy hunter can still kill these animals in places such as Namibia and South Africa legally, albeit with a licence. It’s mind boggling, until you see the numbers. One pound of rhino horn is worth around £150,000 on the Asian black market, where it is used in traditional Chinese medicine. Last year China partially reversed a ban on the trade of rhino horn to allow parts from ‘captive animals’ to be used for scientific, medical and cultural use – a move the World Wide Fund for Nature said would have ‘devastating consequences’.

It is even possible to hunt big game on US soil. The Ox Ranch in Texas breeds exotic animals specifically for hunting. To shoot a zebra costs £4,000; a kangaroo £5,300. If all this continues, we risk making these creatures extinct for little more than machismo, and the facilitators profit. The future must be one where we shoot wild beasts with cameras not bullets.