Sure, she’s the cousin of Prince Harry and William, sixth grandchild of Queen Elizabeth II and the second child of Prince Andrew, Duke of York, but how much do you actually know about Princess Eugenie of York?

With her wedding just around the corner, we thought we’d get to know the royal bride-to-be a little bit better before we watch her say ‘I do’ to fiancé  Jack Brooksbank – a 32-year-old brand ambassador of Casamigos Tequila, co-founded by George Clooney.

From her love of art to her royal mishaps, here’s everything you need to know.

1. Everyone pronounces her name wrong

You’ve probably heard Princess Eugenie’s name pronounced in a number of different ways which, understandably, may have left you confused about how to actually say it correctly. The royal herself says she’s heard it said in so many different ways that she is ‘now used to every pronunciation.’ But what’s the right way of saying it?

Well, it’s Yoo-junnee. Don’t worry, we’ve been saying it all wrong too. But to help others get it right, Eugenie’s mother Sarah, Duchess of York came up with a genius way for people to remember the correct pronunciation. ‘Whenever we used to meet foreign people who were struggling with it, my mum and I would help them by saying, ‘It’s like Use Your Knees,” Eugenie revealed in an interview. Clever.

Unlike her cousins, Eugenie doesn’t work for the Queen – instead, she’s a director at the London art gallery Hauser and Wirth. She once told Harper’s Bazaar: ‘I’ve loved art since I was very little – I knew I definitely wouldn’t be a painter, but I knew this was the industry for me.’

‘I love being able to share my passion for art with people. If someone doesn’t understand something, you have the ability to suggest, “Maybe you can look at it this way.” That’s what I find most thrilling about working in a gallery.’ 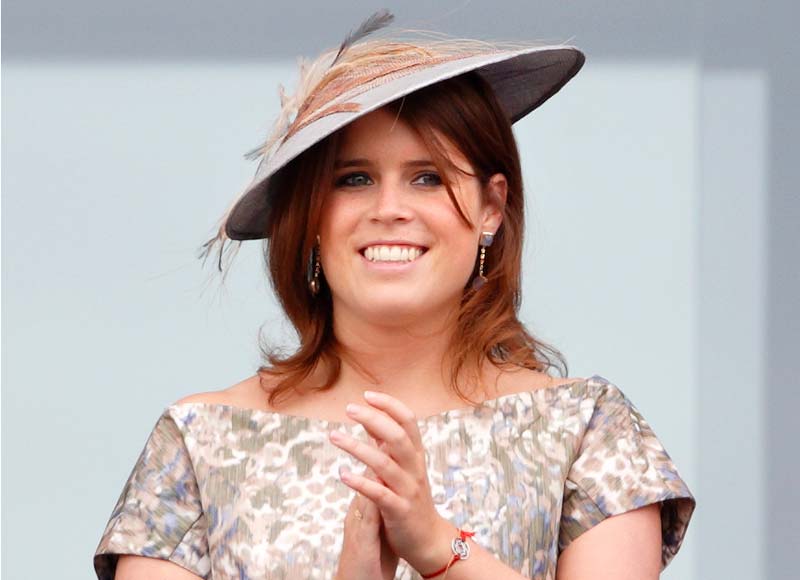 Ever-so-humble, Eugenie isn’t a fan shouting about her royal status – or anyone else shouting about it for that matter. ‘I don’t like talking about it much and find it annoying when people say things like, “Oh, you’re the princess,”‘ she told The Telegraph. ‘One of my best friends jokingly says, “Hi, Princess,” and I say, “Shut up.” It is one of the things that bugs me most in the world.’

4. She argues with her sister like a normal person

Eugenie and her sister, Princess Beatrice, are very close. But that doesn’t mean they don’t bicker. Speaking to The Telegraph, Eugenie said: ‘We had a screaming argument over a pair of Converse trainers that I took back, which she said were hers and I said were mine. Like all sisters, we have silly arguments about unimportant stuff, but we do love each other to death.’

5. Her dog has the same name as her fiancé

Yep. Just like her fiancé, Eugenie’s beloved dog is called Jack. During her interview with Harpers Bazaar, the Princess was asked who she speaks to first thing in the morning, to which she responded: ‘It’s with my boyfriend, Jack…or it’s my doggie Jack — yes, my boyfriend and my dog have the same name – total accident!’

6. She met her fiancé on holiday

Eugenie and her soon-to-be husband Jack Brooksbank met while on a skiing holiday in Switzerland. At the time, she was just 18 and according to Jack, it was ‘love at first sight.’
The couple got engaged seven years later during yet another holiday in Nicaragua. They were overlooking a volcano and lake at sunset when Jack popped the question.

‘The lake was so beautiful – the light was just a special light I had never seen,’ Eugenie said in their engagement interview. ‘I actually said, “This is an incredible moment,” and then he popped the question, which was really surprising even though we had been together seven years.’

7. She has suffered with scoliosis

As a young adult, Eugenie battled scoliosis – a medical condition in which a person’s spine has a sideways curve. Earlier this year, she took to Instagram and shared her own X-ray to raise awareness for International Scoliosis Awareness Day.

‘Today is International Scoliosis Awareness Day and I’m very proud to share my X Rays for the very first time. I also want to honour the incredible staff at The Royal National Orthopaedic Hospital who work tirelessly to save lives and make people better. They made me better and I am delighted to be their patron of the Redevelopment Appeal,’ she wrote.

8. She once got in trouble for posting this on Instagram…

Unlike Duchesses Meghan and Kate, Eugenie is actually allowed an Instagram account. And like the rest of us, she likes sharing bits of her life on the app. However, that’s not to say she’s allowed to post whatever she wants. In fact, she told British Vogue:  ‘I recently got in trouble for posting a picture of Papa [Prince Andrew] in a corridor of the palace that was off-limits to the public.’ Whoopsy.