Family tragedy has made the past year particularly difficult for singer Sharleen Spiteri. She tells Sophie Heawood what stopped her from falling apart.

There’s nothing like meeting a celebrity and finding out that they, too, fell apart in lockdown. Sharleen Spiteri, glamorous frontwoman of the band Texas for almost 35 years, tells me that it was her eyesight that went first, even though she kept denying it to herself. Until she tried to perform an online concert from her home in North London, ‘and I hadn’t played any music, or even seen my band for a year, so I thought, “Oh, I need to write that part of the song down because I keep forgetting it”,’ she explains. ‘Well, that didn’t work because I was squinting at the piece of paper on the floor – I couldn’t see it!’

Then there’s fitness – something that isn’t usually a problem for Sharleen, 53, when touring and running around the stage every night. Stuck at home, bored by the thought of online yoga and refusing point blank to become a jogger, she decided she’d have to lose weight by dancing to the kitchen radio while cooking dinner. So she made a start, and it was an Otis Redding song ‘that was going on for such a long time, I was there thinking, “When is this tune going to end?” But then you think, “I was so skinny when I was young and I used to go out dancing all the time and spend my money on drinks instead of food – I can do this.” Until my husband, who’s a chef, walked in and caught me panting at the oven and asked what the hell I was doing.’

And while we’re on the subject of bodily collapse, there are the hot flushes, which she warns me I need to be prepared for, ‘because I don’t know why they call it a hot flush, that does not describe it. It should be called somebody just set me on fire. It is literally like somebody holding a Bunsen burner under your arse,’ she insists, her Glaswegian accent undimmed after decades of living in London’s Primrose Hill.

We’re both cackling so much with laughter that it is a shock to hear what Sharleen tells me next. It’s one thing to realise a celebrity is fighting the same battles as the rest of us, it’s another to learn they have had a year from hell – their very own annus horribilis, as the Queen might put it.

Rewind to February 2019, and Sharleen was visiting her mum in Glasgow before the pandemic hit. Looking at her in bed in her nightie, she ‘suddenly realised she was really thin’. Sharleen and her sister organised a doctor’s check-up and discovered their mum had such an aggressive stage of lung cancer that she only had two weeks left to live. Chemotherapy wasn’t an option because of the pain she was in already. ‘It was shocking but, my god, Mum was like a lesson in how to die gracefully. It was just extraordinary. She said, “I knew something was wrong…”’

They had been worried about their mum for a while. Why did she seem so down? Was the onset of her husband’s dementia making it hard to cope? Sharleen and her sister had been trying to fix these problems but had no idea their mother was, in fact, in agonising pain. Yet with the help of morphine, ‘it was as though she came back to us. Her old self for two weeks. My dad came to visit her in the hospital and he was like, “I don’t know what I’m going to do.” And my mum replied, “Shut up, this isnae about you.” My sister and I thought, “Mum’s back! She’s literally told him to shut up!”’

Sharleen refuses to feel an ounce of self-pity about her loss, saying she can’t stop thinking about how other people lost loved ones in more difficult circumstances throughout the pandemic. ‘One of my best mates lost her mum to Covid. They took her away in the ambulance and my friend never saw her again – just horrendous for them. My sister-in-law is a ward sister at an NHS hospital. She says it’s too hard even to talk about what it’s been like working on the frontline and if she did she might not be able to go back. So my sister and I were extremely lucky compared to other people. We were able to sleep in the hospital – we were there with our mum the whole time.’

Except that, after the funeral, their bereaved dad took a turn for the worse. ‘Mum’s passing had a massive effect on his dementia and he needed medical care, so the doctors said we had to try to get him into a care home during lockdown. You try doing that! Even he had said, yeah, I think it’s time, but they put him in isolation for two weeks on arrival, which threw him. He wouldn’t speak to me. We were waving at him through the window, but he wouldn’t turn around to look at us. For weeks.’ She shakes her head at the memory. ‘Talk about a rollercoaster. That was awful.’

The morning after Sharleen got back home to London to be with her husband Bryn and daughter Misty Kyd (from her previous relationship with magazine editor Ashley Heath), Sharleen got a call from Misty’s sixth-form college to say that the 18-year-old had been knocked down by a car. ‘The people who saw it said she went up in the air, then landed on the windscreen. I ran from our house – though I do not remember running. Seriously, I couldn’t run for a bus usually. I ran all the way up Primrose Hill.’

Misty, who was studying for her A-levels and working as a model, had no visible wounds but was in a lot of pain, so Sharleen wanted to take her to hospital. However, the hospital told her, over the phone, that they were dealing with Covid and she’d have to wait. At 5.30pm they were still waiting. ‘I was thinking, she could have internal bleeding. They’ve got to see her! I was losing my mind.’ Eventually their GP referred her for a scan, which revealed that, incredibly, she had no major injuries.

Needing some respite, Sharleen, Bryn and Misty decided to spend some time at their holiday house in Wales. ‘I’d done all the work on the new record and under normal circumstances it would have been coming out and there was a tour booked.’ The tour was cancelled because of Covid and in hindsight Sharleen is grateful for this unexpected breathing space. ‘I don’t know what would have happened if we’d had to go out there. I think I would have crashed and burned. At this point I just needed to sit with a cup of tea and Eastenders and zone out.’ As Sharleen dealt with her grief, the world collapsed around her. Gradually, though, the family started to relax. Except that Bryn was so used to working late in his restaurants – Odette’s near the couple’s home in Primrose Hill as well as a beach-front eatery near his hometown in North Wales – that spending evenings in front of the TV was new to him. ‘Initially, he was like, “I’m not watching this rubbish.” Then he got into Line of Duty. He had all of it ahead of him to catch up on – I was really jealous!’

They went back to London, where all three of them took turns cooking and channelling their heartache into becoming obsessive gardeners. ‘We’re like some American family with a pristine clipped garden now. The garden is insane, we had nothing else to do.’ Sharleen had worked as a hairdresser before she was a pop star, and was already used to cutting her family’s hair, so she boldly expanded her repertoire and tried doing the dog. The results can be seen on her Instagram. Readers, it did not go well…

Of course, the parents of a teenager who has modelled for the designer labels Miu Miu and Fendi as well as Vogue might have been relieved that their daughter was grounded by lockdown. Sharleen says that she herself was never part of the legendary Primrose Hill party set, ‘though I know Sadie [Frost] and Kate [Moss] and I’ve hung out with all of them. And now our kids go to school together.’ She admits it has been funny watching the rise of a Primrose Hill junior set – Sadie Frost’s daughter Iris Law is a model too – but insists she doesn’t have to worry about her own daughter partying too hard. 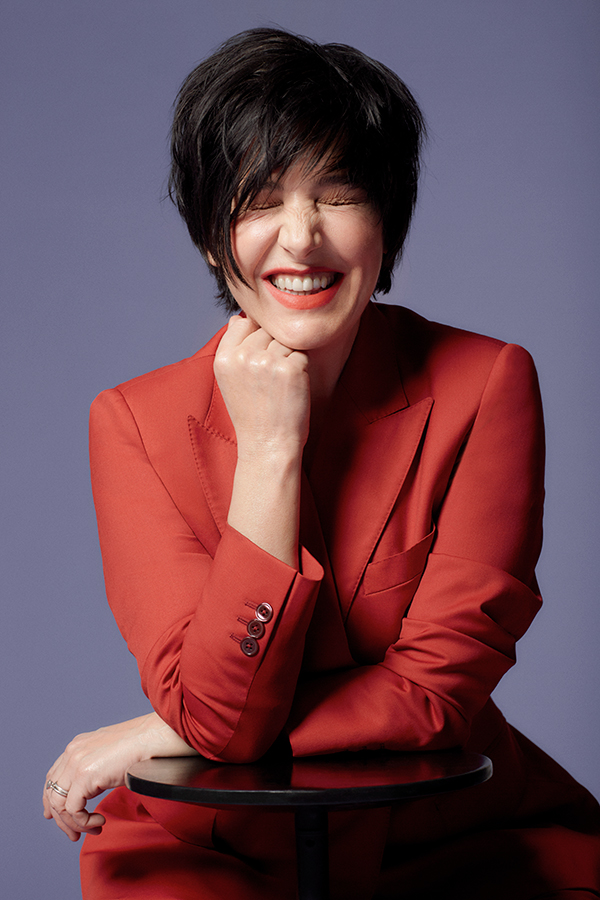 ‘I took Misty to see T2 Trainspotting when it came out and I remember she pulled her hood over her head when something horrible happened. I told her, “Just to let you know, drugs start off good fun but that’s what happens. So be aware!” And that was it. She still says to this day, “Oh, my mum took me to see Trainspotting and I thought, f*** that!” So, yeah. That’s basically it.’

Stella McCartney, who made Sharleen’s wedding dress, is a close friend and able to advise on Misty’s fashion career. ‘Stella’s been really interested in it. We talk about our children coming into adult life and what they’re going to do. It’s funny seeing them going to events though. They’re the young bucks now.

‘What’s interesting is that Misty doesn’t use my surname or her dad’s. She said, “I don’t want people to know”.’ She was repeatedly scouted by modelling agencies from the age of 14, but her parents said she had to focus on school instead. Finally they relented, ‘and she’s lucky to have parents who can say, “Let me see that contract, I can check exactly what you’re signing.”’

It was important for Sharleen to ensure that her daughter had other plans in case it didn’t work out. Having grown up in a working-class family, always grafting, it was a worry that Misty might not be so determined. ‘My attitude is, if you want it, you pay for it. I’m not doing it. This isn’t the Bank of Mum! I’m relieved that she has a really strong work ethic now, because there were times when I seriously went off at her. But now, with the modelling, when I asked her if she had a plan B, she told me, “I’ve got a plan B and a plan C.” She told me what they were and they’re really good. I said, “Now you’re talking my language.”’

Texas’s latest album Hi is out now. For more information on their 2022 UK and Ireland tour, and to buy tickets, go to texas.uk.com.