From her debut moment on the steps of the Lindo Wing, six-year-old Princess Charlotte has charmed the nation with her picture-perfect outfits and her adorable royal wave, and we can’t wait to keep watching her grow.

So in honour of the Cambridge family’s only girl, here are 16 Princess Charlotte facts you might not already know – prepare for maximum cuteness.

She’s a bit of a foodie

In May 2021, the Duchess of Cambridge revealed Princess Charlotte enjoys snacking on – no, not chocolate or sweets – olives! Kate made the admission during a visit to Lavender Primary School in Enfield as part of her Place2Be Patronage, as well as sharing that Charlotte and Prince George had helped her make cheesy pasta recently.

When Charlotte’s parents visited the Prince Shah Karim Al Hussaini, Aga Khan IV, in anticipation of the family’s tour of Pakistan in 2019 – where they are very much looking forward to trying the local food.

Talking about making curry at home, Kate explained that she’d make a different version for the children to the one she and Prince William would eat – but then she added that ‘Charlotte is pretty good with heat’. During her first pregnancy, Kate reportedly experienced cravings for spicy food, and now it appears that her daughter is following in her footsteps.

Previously, while helping to prepare a group lunch at St Luke’s Community Centre, Kate let slip another secret about George and Charlotte’s culinary life. After telling a fellow participant that she’d made pizza dough with the pair, she said: ‘They love it because they can get their hands messy.’

During a later appearance at Great Ormond Street, Kate also revealed that her only daughter is also a fan of pasta.

She’s not to be messed with

According to royal expert and author Katie Nicholl, Charlotte earned a fitting nickname during her time at Willcocks Nursery School, thanks to her ‘feisty’ personality: Warrior Princess.

‘I’m wondering if that might be a nickname that will stick with her,’ Nicholl said during a segment on Entertainment Tonight recently. ‘Apparently she earned that nickname because obviously she is a princess, but she’s quite a tomboy.’

You may have spotted the cute unicorn keyring on her backpack on her way to her first day of school at Thomas’s Battersea, but Prince William has further reinforced his little one’s love for the creatures.

While browsing some homemade art at Harcombe House, Devon during a visit to mark Emergency Services Day, the father-of-three spotted a crafty handmade unicorn and remarked: ‘My daughter loves unicorns. Loves them. Very cool.’

According to her mother, the Duchess of Cambridge, both Charlotte and her brother Prince George have taken up photography has their latest hobby.

Speaking to a group of teenagers during a visit to the Action for Children centre in Kingston, Kate said that her two eldest children love going outside to take photos, saying: ‘Just look at everything around you. Maybe it’s in front of you, or far away but choose your subject and focus on it. Get outside with your camera as well. George and Charlotte love it when we do that.’ 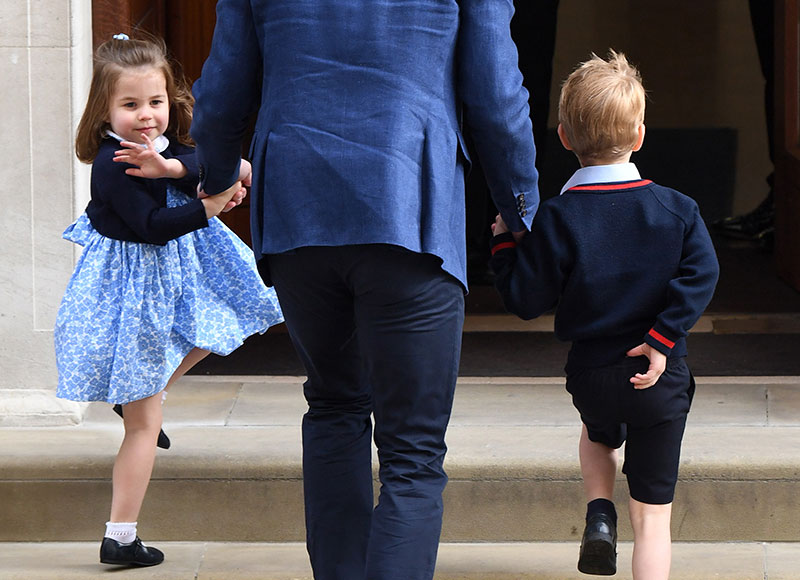 When baby Cambridge the third, Prince Louis, was born, Charlotte made the history books as the first female royal ever not to be pushed down the line of succession by her baby brother. Prior to the Succession to the Crown Act being passed in 2013, any girls born to a royal couple would automatically be moved down the line by boys.

Princess Charlotte, however, remains fourth in line to the throne, behind grandfather Charles, dad William, and big brother George.

She was a very ‘easy’ baby… 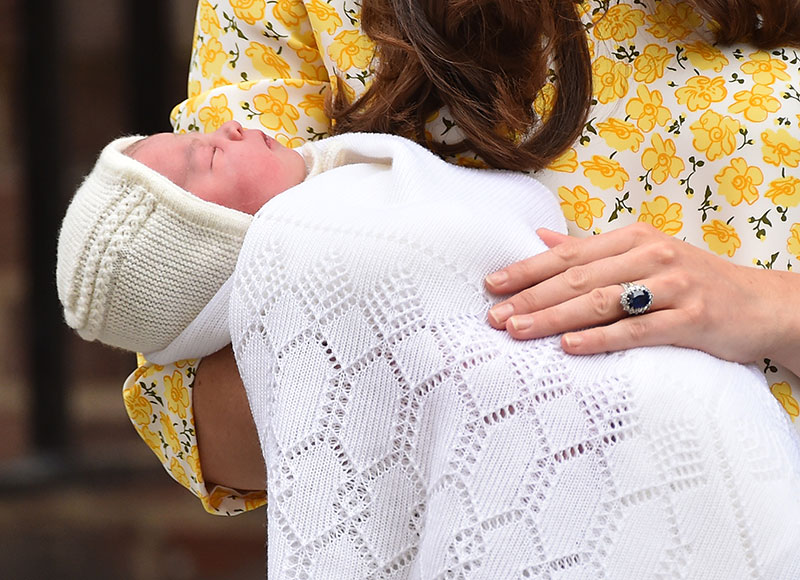 Prince William spilled the beans about little Charlotte’s ‘very easy’ and ‘sweet’ nature back in 2016, during a visit to Principality Stadium in Cardiff.

‘Charlotte is very easy, she is sweet,’ he said of the then nine-month-old during the appearance. ‘But all the fathers say to me “just you wait, when they get to nine or 11 they get crazy”.’

…but now she’s the boss

William may have been wise to heed those warnings, at least according to Charlotte’s great grandmother, Queen Elizabeth II. Speaking with a student attending one of the schools on her Norfolk estate Sandringham, Her Majesty asked if the 10-year-old ‘looked after’ her younger sister. The child’s mother replied: ‘It’s the other way around,’ to which the Queen responded: ‘It’s like that with Charlotte and George’.

Her sentiments were echoed by the Duchess of Cambridge, who had previously confided that Charlotte is ‘the one in charge’. Although George is the eldest in the family, it would seem that Charlotte is the one calling the shots… 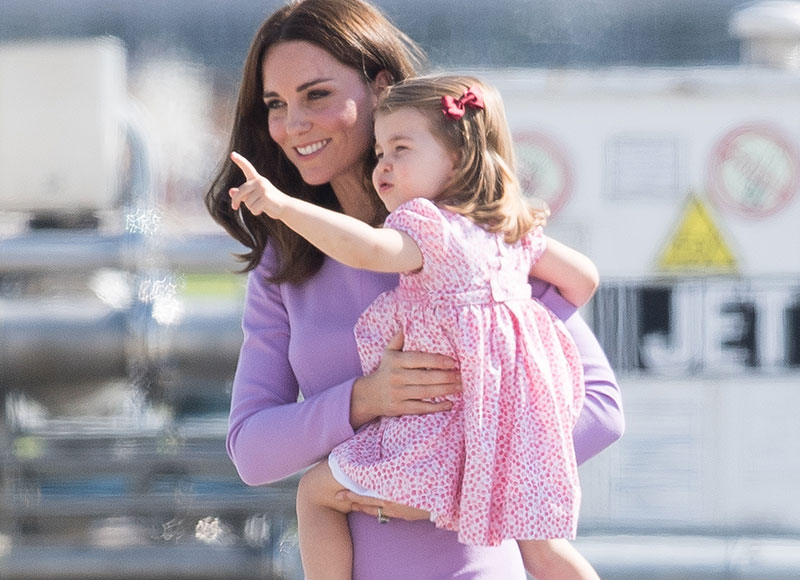 When Princess Charlotte started attending nursery at the age of two, a source told PEOPLE magazine that not only is she ‘polite and confident’ she’s also ‘chatty’ – in two languages, no less.

Charlotte has reportedly picked up some Spanish from the Cambridge’s nanny, Maria Turrion Borrallo, who has been looking after the royal children since 2014. Impressive speech skills for such a little lady, no? 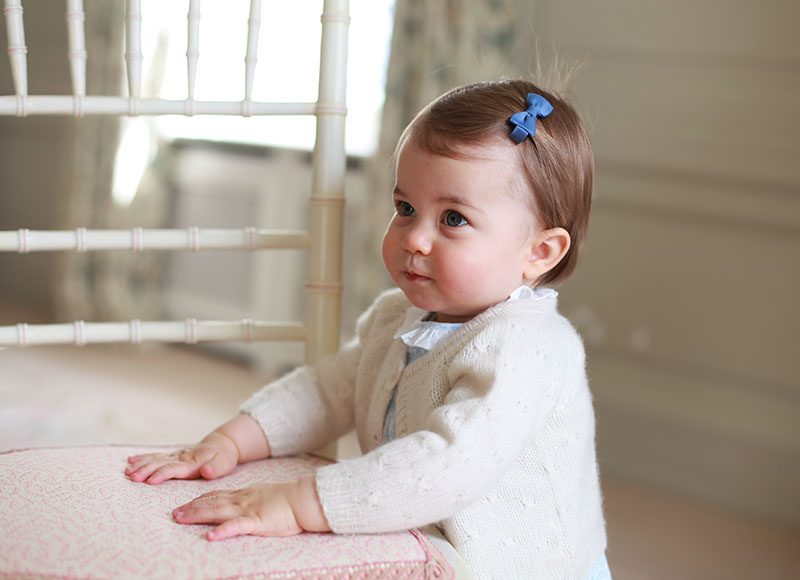 The royals have a well-documented love of tennis, with Charlotte’s parents William and Kate pictured at Wimbledon cheering on their favourites on Centre Court on a number of occasions – and it would appear that Charlotte has picked up on their enthusiasm.

In December 2017, it was reported that the two-year-old had been enrolled for tennis lessons at the famous Hurlingham Club, with an insider revealing to The Sun newspaper that she’s ‘a bit of a natural’.

And she loves to dance 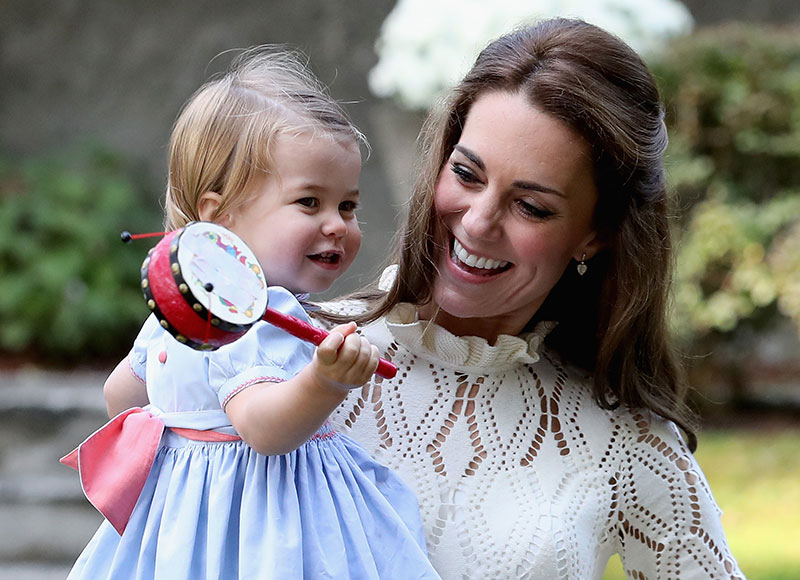 As if wielding a racket wasn’t enough, Charlotte is also said to have taken to the dance floor at a very early age. While meeting with Malta’s leader Joseph Muscat, Prince William stated that she already ‘loves dancing’.

After the tidbit was made public, some speculated that Charlotte’s talent for a two-step may have been inherited from her late grandmother, Princess Diana, who was well-versed in ballet, and danced for much of her adult life.

She’s got a favourite show 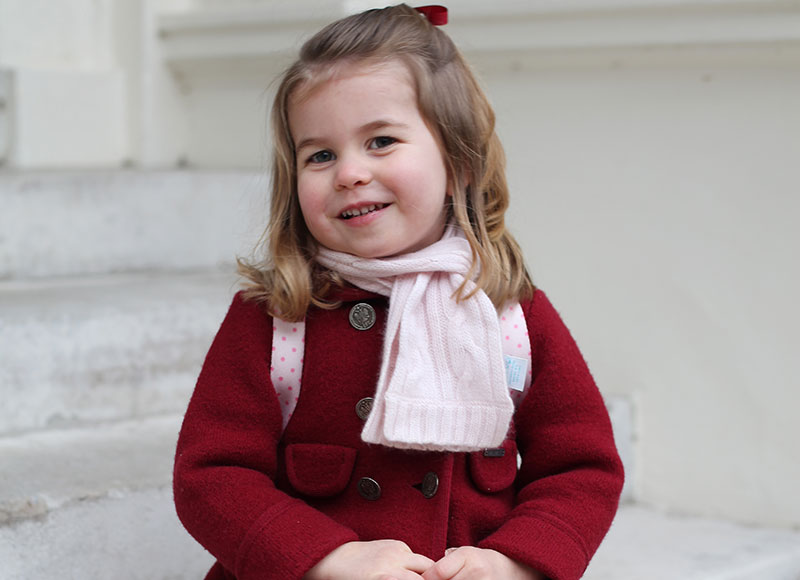 Much like millions of other children across the country Charlotte was absolutely besotted with Peppa Pig. When Kate visited a farm in Gloucester shortly after her daughter’s second birthday and was presented with a card and gift for the tot, she opened up to teacher Natalie Graham and her pupils about Charlotte’s penchant for the famous porker.

‘She [Kate] told them that they had a little party for Charlotte yesterday and she sung Happy Birthday to herself!’ Natalie told reporters after their meeting. ‘It was so sweet. She loved the card and present and said Charlotte would love it too as the card had Peppa Pig on, which she loves.’ 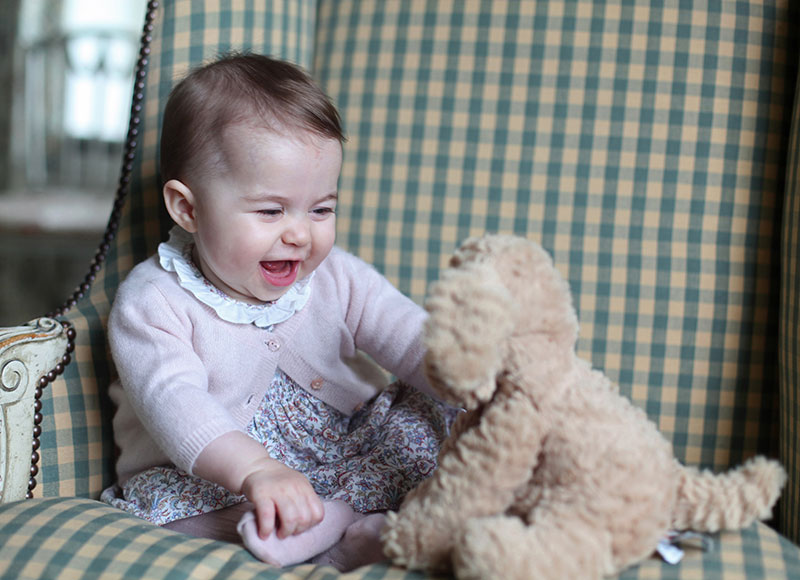 We already know that there’s a dog in the household – William and Kate welcomed pup Lupo into the family in 2011, prior to having children. But there’s another, much smaller Cambridge creature at the heart of Charlotte’s affections.

Following an event at Hampton Court Palace, a child who had a conversation with the Duchess divulged: ‘She said she had a hamster, and Charlotte really likes it because the whiskers always tickle her face.’ Oh, and the name of the little critter in question? Marvin! We wonder if Charlotte was allowed to choose it.

Her first (public) word was adorable 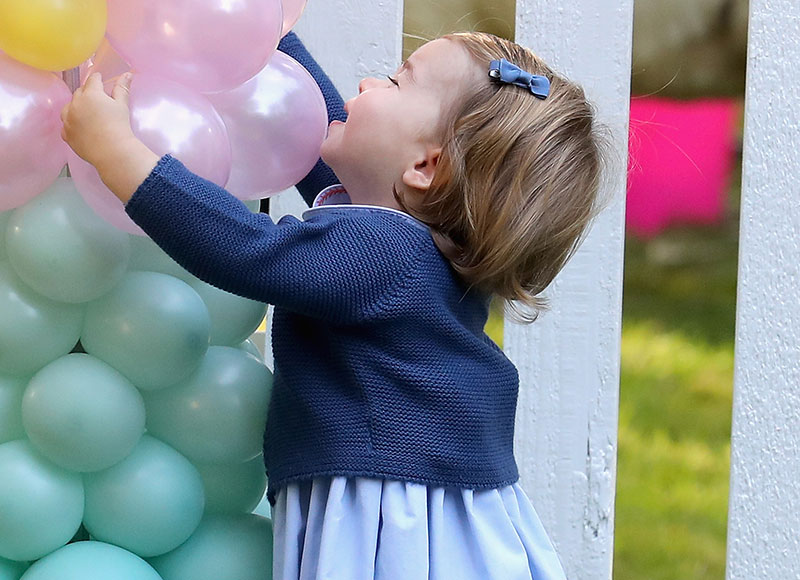 Of course, while we have no idea what Charlotte’s first word was behind closed doors (although we do love the image of William subtly chanting ‘dada’ around his little girl in the hopes of getting in there first).

However, on the Cambridge’s royal tour of Canada in 2017, a very excited Charlotte entered a children’s party thrown in their honour by dashing towards an arch of balloons and shouting ‘pop!’ 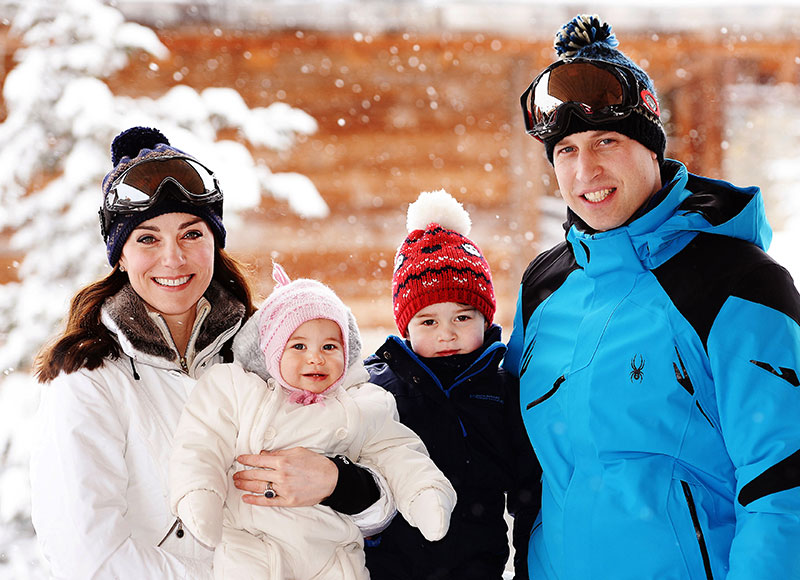 For a six-year-old, that is. As part of her royal duties, Charlotte has already racked up visits to Canada, Poland and Germany, and that’s not all.

Who could forget when the family of four jetted off to the French Alps for a holiday – marking the first time either of the children had seen snow – and shared a series of heartwarming snaps, starring Charlotte in this rather snazzy snow suit? 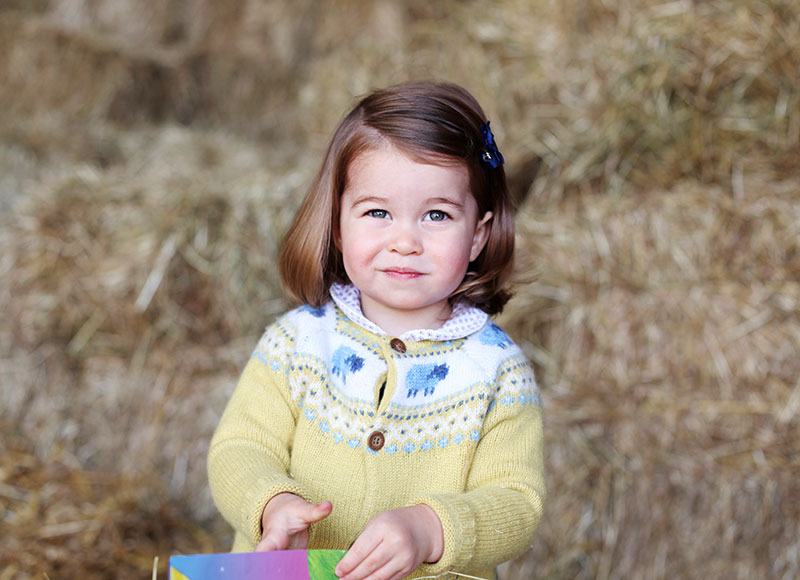 Speaking of her outfits, it’s a pretty common occurrence to see an item that Princess Charlotte sports promptly selling out. In fact, according to research from eBay, she’s already overtaken her mother in terms of style icon status.

Speaking to HELLO! magazine at the time the study came out, eBay’s Murray Lambell detailed: ‘[Charlotte’s] yellow cardigan worn in her birthday picture sparked the biggest percentage increase in searches for an item of clothing worn by any royal.’ There was also a huge amount of interest in the ditsy pink dress she wore in Germany.

Her net worth is huge 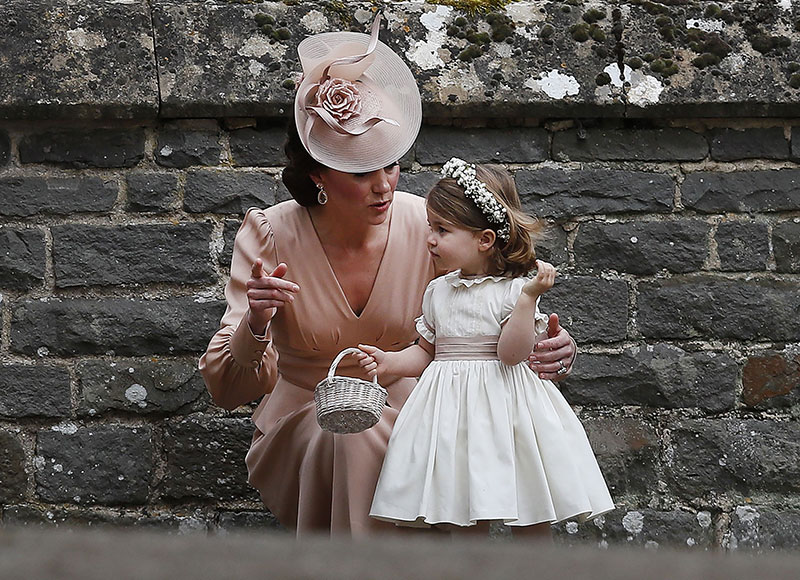 Bigger than her big brother’s, in fact. Last year, Brand Finance estimated that Princess Charlotte’s net worth had reached a staggering £3 billion – while Prince George is worth a mere £2.4 billion.

However, this isn’t a negative reflection on her big brother – Brand Finance’s marketing and communications director Robert Haigh explained: ‘This is actually as simple as the relative size of the men’s and women’s fashion markets, by which I mean that Charlotte’s endorsement effect will likely be felt across a much broader range of products and brands or types of clothing than will George’s, allowing a greater scope for the monetisation of her “brand” and hence a higher value.’

Either way, those numbers are not to be sniffed at!

Everything you need to know about Luther season 5

The most watched BBC show of the year has been revealed

Gwyneth Paltrow says this is why she and Chris Martin still...

EMOTIONAL TIES: Lulu Guinness shares the things that mean the most...

EMOTIONAL TIES: Philippa Perry on finding happiness in the handmade

TELL TRINNY: How do I stop my copycat friend?