Tucked down a London side street lies a treasure trove of toys, games and (spooky) dolls from years gone by. Kate Thompson unravels how this one-of-a-kind museum survived wartime bombs, has inspired classic literature – and, these days, terrifies tourists.

It is 1944 and in the basement of 73 Hoxton Street, East London, Louisa Pollock and her younger sister Susan crouch, breathless in the darkness. Above them the doodlebug engine cuts out, there’s a terrifying silence, then a huge explosion. The ground around the sisters shakes and plaster dust rains down from the ceiling.

The sisters emerge to survey the damage, fearing the worst. However, to their relief, only the windows of Pollock’s shop are destroyed and the precious toy theatres in its workshop are unscathed.

For those unfamiliar with toy theatres, they are exquisite miniature stages that allowed people to re-enact their favourite plays with small cut-out characters. The first one was made in 1813 and soon a flourishing trade enabled nimble fingers to bring to life enchanted castles, captive princesses, sleeping beauties and conquistadors.

Had the flying bomb’s trajectory been just a few metres different, a century of history would have been lost; the shop’s theatres had already inspired Treasure Island author Robert Louis Stevenson, Charlie Chaplin and even a young Winston Churchill. Louisa and Susan were obviously relieved and hope the shop, which was set up by their grandfather John Redington in 1851, and its toys will inspire generations to come.

Fast forward to the mid-50s and Pollock’s has also survived a near miss with bankruptcy and is now owned by BBC journalist Marguerite Fawdry. While looking for wire slides, which help to move the little cardboard characters around the stage, for her son John’s toy theatre, Marguerite came across the collection. On impulse she decided to buy not just the slides but the entire stock. With support from her husband Kenneth, she started breathing new life into Pollock’s.

She set up new premises in the attic of 44 Monmouth Street, Covent Garden, and hit upon the idea of making it a museum and toy shop. She also wanted to showcase more than the little theatres, so while other people in postwar Britain were getting rid of Victorian toys and memorabilia, Mrs F was enthusiastically collecting them.

‘It was a canny move,’ says historian and chairman of Pollock’s Toy Museum Trust Alan Powers. ‘The museum was magical. I visited often as a child and was thrilled when, in 1965, she offered me a holiday job.’

According to Alan, ‘Mrs F wore long floaty dresses and had a strong sense of the dramatic’, and her museum was as eclectic as she was. An entire ‘nursery’ filled with dolls, staircases lined with board games, teddy bears climbing trees. ‘It was a far cry from the usual stuffy museum displays of the time,’ he says. ‘She and Kenneth travelled Europe, buying stock and then showcasing their wonderful finds in the museum. She had a great eye and a curiosity for other cultures. At her heart, though, she loved children and wanted to nurture their imaginations.’

Keeping a small museum going in London was no easy matter. ‘The taxman would ring up,’ recalls Alan, ‘and Mrs F would say: “Tell him I’m dead, would you, darling?”’ When Monmouth Street came under threat from developers, she moved Pollock’s to Scala Street in Fitzrovia and, two years later, in 1971, bought the house next door to knock through and create an intriguing maze of rooms.

Fifty years on and it is still in this atmospheric townhouse, full of sloping doorways and creaky floorboards. To walk through its doors is to step into the past: from Lesney Matchbox toys to ornate rocking horses and the little theatres, it’s a reminder of the joy of childhood. You can’t help but wonder what tales these toys would tell if only they could talk.

Mrs F died, aged 83, in 1995 and the museum then passed via her son John and grandson Eddy, down to her great-grandson, artist Jack Fawdry. Though Jack and his dad have updated the museum a little, with a display featuring his own favourite, Buzz Lightyear, the display cases remain little altered since Marguerite’s days.

In the second-floor nursery, Victorian china and wax dolls gaze unblinkingly at you. ‘I’ve had more than one Japanese tourist leave here in a hurry,’ Jack, 30, reveals. ‘In their culture, after 100 years, objects gain a soul.’

On a staircase a framed Victorian jigsaw of a blonde ringleted girl has one piece missing. ‘I always think if that piece is found, she’ll come to life,’ Jack laughs. Elsewhere wind-up robots, hand-painted Russian dolls and Punch and Judy puppets jostle for space with marbles and moneyboxes. If childhood is lost to you, it can be found among the paper puppets, Jack-in-a-boxes, kaleidoscopes, Meccano sets, toy soldiers, cars and trains.

Pre-pandemic the museum drew over 10,000 visitors each year, including celebrities. ‘Five years ago, I found Angelina Jolie touring the museum with her brood,’ says Jack. ‘She was very interested in our toy theatres.’ David Bowie and Paul McCartney have also visited.

When the museum looked set to fold during the pandemic, donations came from supporters including author Philip Pullman. In just 28 days, £41,568 was raised. ‘I was overwhelmed,’ Jack says. ‘People told us how much they loved Pollock’s, that we are unique and shouldn’t be lost. It was emotional to hear strangers echoing values I believe in, too.’

In a time of transient shop fronts and sanitised high streets, Jack believes museums stand as a testament to the past. ‘There aren’t many museums as unique as ours. London changes so fast – it’s important to have things that stick around. We aren’t here to make money but to tell a story.’

Jack is bubbling over with plans for the 170-year-old business – including travelling exhibitions and workshops. On a shelf in the museum, a gold-coloured carving of Marguerite’s face gazes down. She looks for all the world like she approves.

Pollock’s playthings of the past 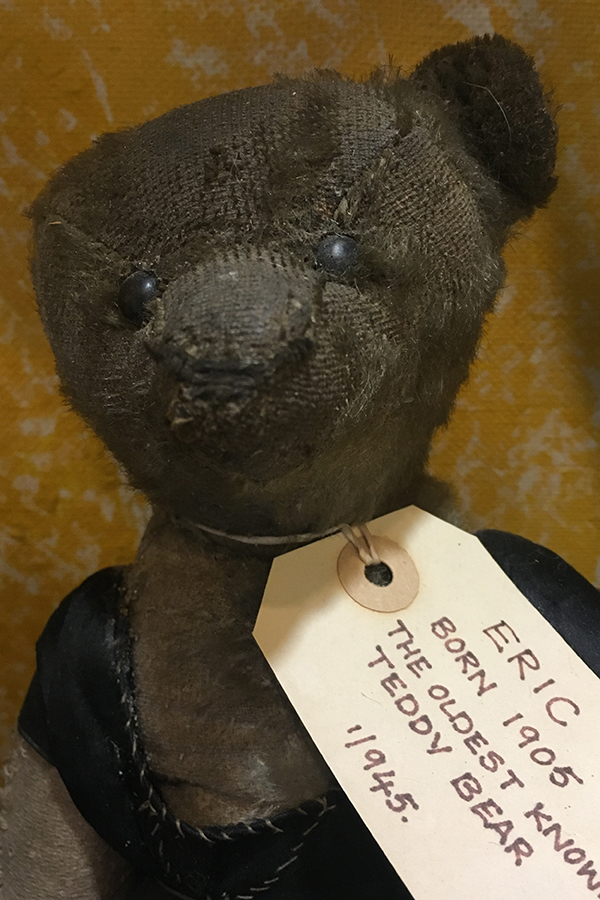 ‘Born’ in 1905, he is the ‘oldest known teddy bear’ – though history doesn’t recount where his right ear has gone. ‘We don’t have any heating in the museum,’ Jack says, ‘which helps to keep moths from attacking Eric and his friends.’

Tantric snakes and ladders, anyone? 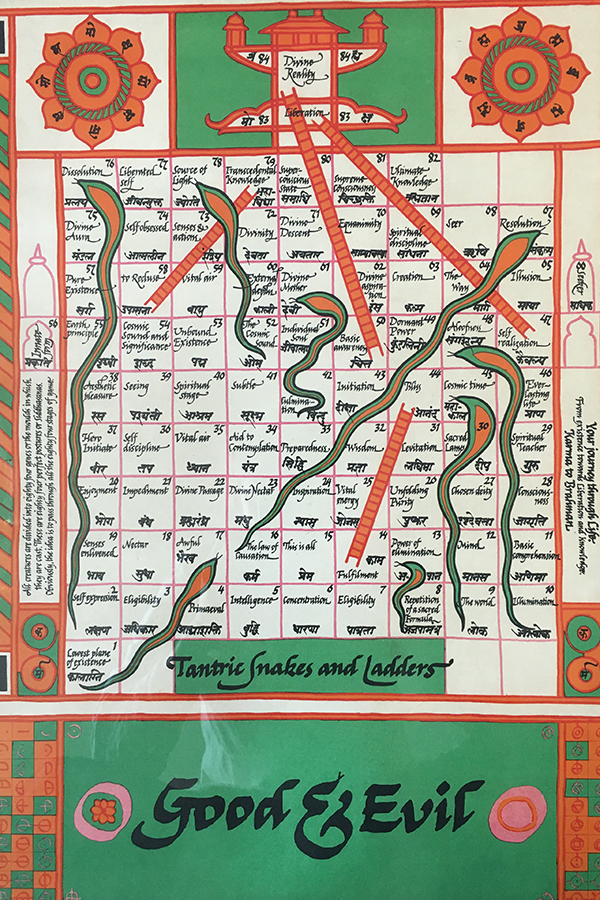 Based on the game called Moksha-Patam, often used in India for Hindu religious instruction, this represents the journey of a soul through life with virtues (ladders), which are rewarded, and vices (snakes), which are punished. 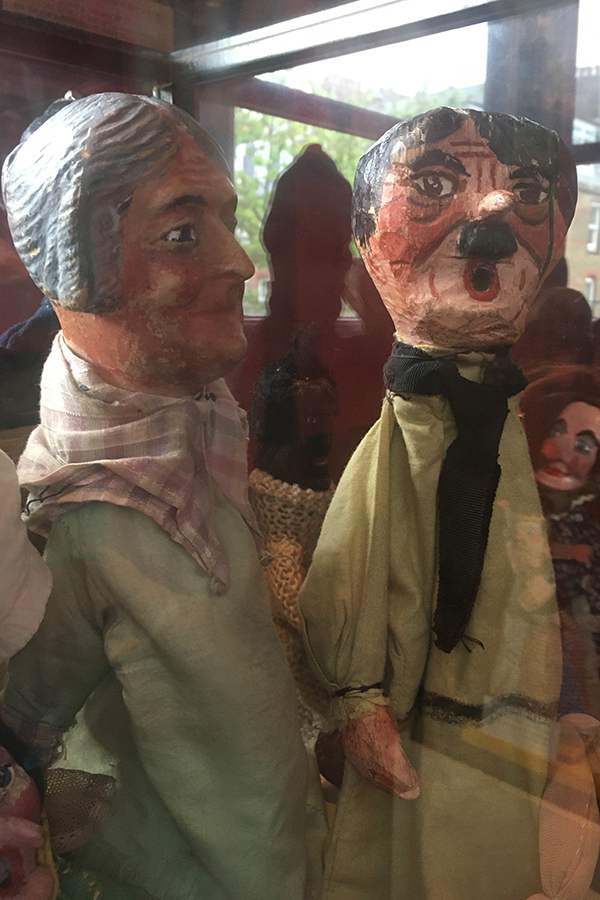 Punch and Judy puppet shows were often a way of relaying information to the public and satirising the news. Lampooning villains was popular and by 1939, there was no bigger villain than Hitler (above right). 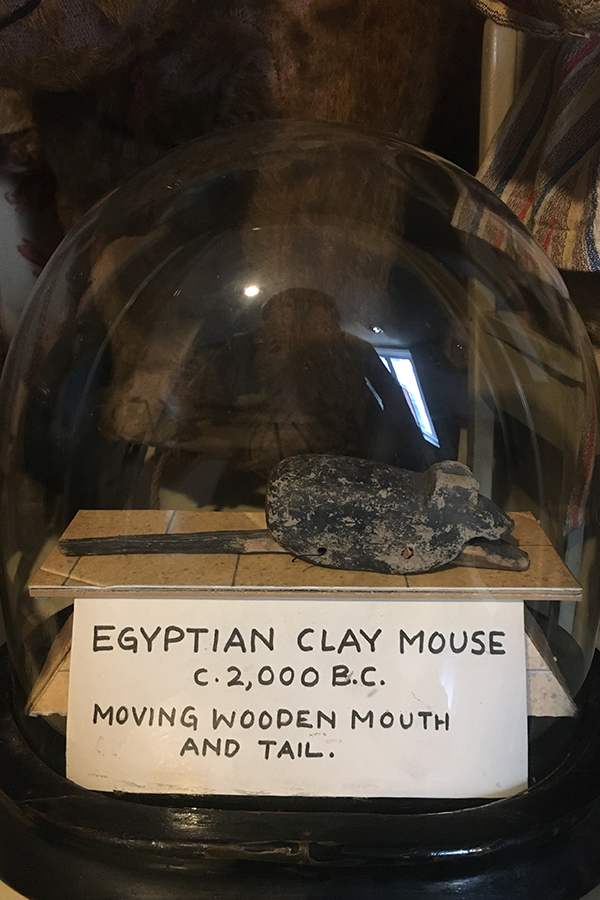 Intriguingly, not much is known about this 4,000-year-old toy mouse, which is from the banks of the river Nile. The mind boggles to think of who this little creature once belonged to. 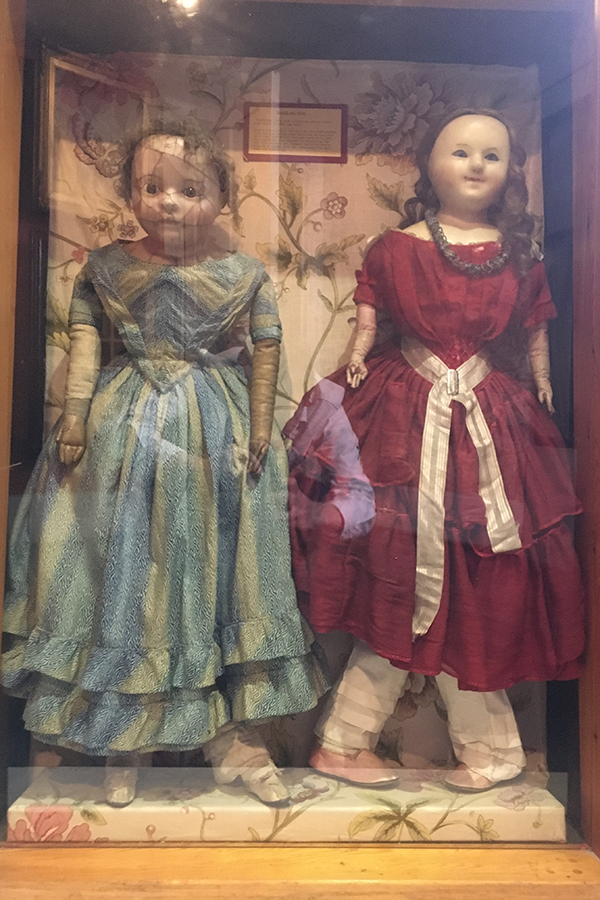 ‘Yes, she is a little creepy,’ Jack says of Caroline the doll (left), who dates back to 1822. She has a wax-over-papier-mâché head and a stuffed rag body. The doll on the right, from 1825, can move her eyes.

Pollock’s is open now. Tickets £9 for adults, £4.50 for children. For more details and to book, visit pollockstoymuseum.co.uk.