Sibling relationships have the potential to be enduring and loving – but often go very wrong. Anna Moore pinpoints common flashpoints and ways to stop them turning into feuds.

Our sibling relationship is a connection unlike any other. It’s intimate, intense; a lifelong bond fraught with love and hate, jealousy and admiration, irritation and empathy. We start in the same place – in the same family with the same chances – and sometimes our lives follow spookily similar paths. More often, though, we diverge wildly, with different careers, new partners and differing views, which can cause family rifts. Yet siblings are our anchor points, our memory-keepers, and research shows that close relationships improve our health and happiness, which is why Relate now offers sibling therapy for those who are struggling. So what are the challenges faced by siblings at each life stage and what steps can you take to resolve them? 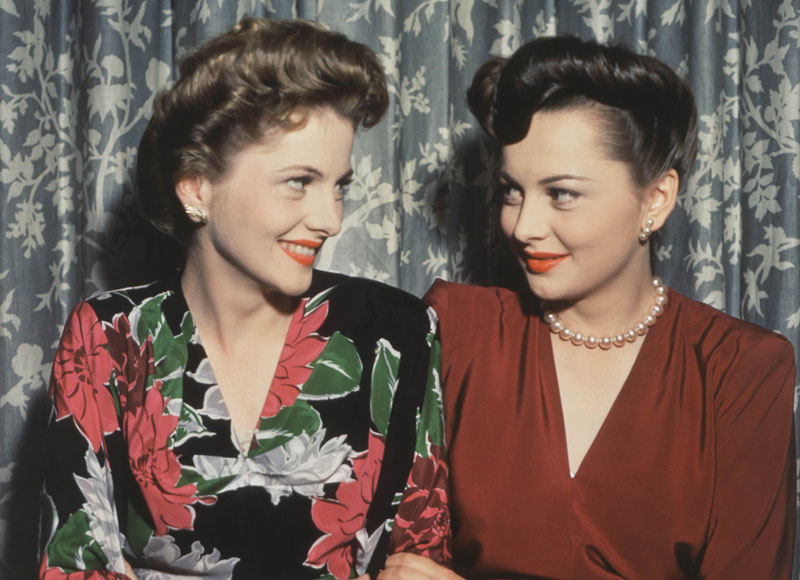 The Darwinian struggle for our parents’ love, time and attention is programmed into us. ‘It’s normal and natural,’ says clinical psychologist Linda Blair, author of Siblings. Issues can flare over who is cleverer, more attractive, who has more friends – and who the parents love most. ‘What counts in the early years is how parents react,’ says Blair. ‘If handled badly, it can damage the sibling relationship for years to come.’ This is what Sarah, 43, fears. She has two daughters, Charlotte, ten, and Chloe, 11. Chloe is more academic, sporty and outgoing than Charlotte, who seems resentful of her sister’s
achievements. ‘They’re hugely competitive,’ says Sarah. ‘I think Charlotte feels she can’t match up even though she has other talents – she’s much more creative but constantly judges herself against her sister. They wind each other up bicker, scream. What upsets me is that I see no signs of love between them at all.’

Oscar-winning sisters Joan Fontaine and Olivia de Havilland had a notorious rivalry. Olivia called Joan ‘dragon lady’, and Joan remarked: ‘Olivia says I am first at everything. I got married first, got an Oscar first, had a child first. If I die, she’ll be furious, because I’ll have got there first!’ Joan died in 2013, aged 96; Olivia is 101.

This is a key decade for siblings. ‘It’s when our paths start diverging,’ says psychotherapist Christine Webber. Some might go away to university while others stay at home. You choose different careers, start having serious partners whom the others may not like. ‘When your siblings make different life choices, it’s easy to say, “We’ve got nothing in common.” But if you drift apart now, it can be very hard to reconnect,’ Webber warns. Rachel, 25, has a twin sister and a brother who is 28. ‘My brother has done his own thing, got a job at the other end of the country and is living with a girlfriend we’ve not met. He barely communicates with us and I worry we’re becoming strangers. With my sister, it’s the opposite: it’s too intense. There is competition over who is making the best life, with a boyfriend and a career. When we were younger my sister wanted to work in fashion, but she has ended up in sales, making money in a soulless job. Her boyfriend is fixated on income and possessions; I can’t stand him. I’m building my dream career working with animals, which means I have much less money, and at the moment I’m single. We’re living different lives. I feel she’s judging me and I’m probably judging her. We’re less connected than ever.’

Noel, 50, and Lliam Gallagher, 45, have been at loggerheads for years. On The Graham Norton Show last year Liam said, ‘We don’t like each other,’ while Noel has suggested that Liam ‘needs to see a psychiatrist’.

This is when money and lifestyle differences can really start having an impact. Your sibling’s choice of partner can affect the family dynamic and there can be competition
over whose children are the highest achieving or most loved by grandparents. Liz, 37, a full-time mother-of-three, resents her younger sister, who is married to a wealthy husband. ‘It’s impossible to walk into her home without feeling horrible about my life,’ she says. ‘She married money – she’s also brilliant and creative and lives in the sort of home you see on Grand Designs. I’m living in a two-up, two-down, dreaming about maybe one day being able to afford a loft conversion. Her children have private education, music lessons and tutors, and she expects us to celebrate their every achievement. Distinction on the violin; top in maths. I’ve never resented her as much as I do now.’

When singer Olly Murs, 33, chose The X Factor over his twin brother Ben’s wedding in 2009 they fell out. Olly said: ‘Every artist has something against them. Mine was my brother.’ Ben has said, ‘I don’t care about the star Olly Murs. I want to know my brother.’

Similarly, Dame Joan Collins says that she and her sister, the late novelist Jackie Collins, did not always see eye to eye. Joan, 84, reveals, ‘I was going out with somebody she loathed and he didn’t like her so we didn’t spend a lot of time together. But this happens.’

Family responsibilities and care of elderly parents can be hugely divisive. Studies show that in 40 percent of cases, there’s a single primary caregiver who feels unsupported by other siblings. ‘Watching your parents decline is emotional and painful,’ says psychotherapist Wendy Bristow. ‘Add to this the relentless practical demands and financial decisions involved, and it’s hardly surprising many sibling relationships break down under the strain.’ Laura, 54, visits her 90-year-old mother, who has dementia, daily. She feels ‘saddled’ with the responsibility because she lives nearest, has no young children or full-time job and sees herself as the ‘least successful’ of her three siblings. But they take a different view. ‘They think I’m the “favourite” and that I’ve always been closest to my parents,’ says Laura. ‘My brother accused me of blocking them out. That left me dumbfounded.’

Julia Roberts, 50, fell out with her brother, actor Eric, 62, over his drug and alcohol abuse. They were estranged for several years until the birth of her twins in 2004. Eric says: ‘I was exhausting to be around. Everyone in my world needed a break, and that must have included Julia.’

Where There’s A Will…

We might expect the death of a parent to bring a family together, but often the opposite happens. Siblings fall out over funeral arrangements, the will, the family home… ‘Losing a parent is enormous,’ says Bristow, ‘and at the same time, you have to make family decisions and do more joint organising than you’ve probably ever done in your lives.’ Other
flashpoints can be the death of a sibling’s partner or divorce. Sarah, 62, has not spoken to her sisters following the loss of their mother. ‘We were devastated when she died as we were close to her, but not to each other,’ says Sarah, a lecturer. ‘Our father had died two years previously so we had to work out what to do with the family home and possessions. Every item had an emotional connection. The process took a year with many disagreements.  I’ve not been in touch since.

Madonna, 59, has a rocky relationship with her brother Christopher, 57. They were estranged after his explosive 2008 bestseller about her, but eventually made up. Last year he said he could write another book about how ‘horrific’ she is but is choosing not to.

Politician Ed Miliband, 48, was accused of knifing his brother David, 52, in the back when he defeated him in the 2010 Labour leadership contest. Two years ago Ed said: ‘As time passes it becomes easier.’

Sibling therapy – can it help?

Natasha, 35, a teacher, attended sibling therapy with her sister Chloe, 34. She says: ‘My sister and I have always been really close and really competitive. There’s less than a year between us and we don’t have other siblings. However, in our 20s we drifted apart. We were both busy establishing careers and I was also in a relationship and have since got married. I probably had less time for my sister than she did for me – I think Chloe, who is single, found it harder than I did. She was very prickly and I knew that she wasn’t happy, but I couldn’t seem to mend things. She started having therapy, then asked me if I’d have a session with her. I didn’t hesitate; it was a chance to reconnect. ‘First, I went to see the therapist alone and told her how I felt. Then we had a two-hour session together. It was weird – like we were on a TV show – but looking back it was a pivotal moment. We had to listen to one another without interruption and there was a truly objective person – rather
than our mum or dad – to mediate. My sister was able to say she felt neglected, frozen out. I told her why I found it difficult when we were together. At the end of the session, the therapist asked us both what we would like to happen next and we went away with ideas about how to improve our relationship. It was exhausting but helpful. I want my sister in my life and for her to be happy. Now we try to do one thing a week together, such as see a film or an exhibition. It’s good to know we can go back for another therapy session if we need to.’