What do you do when your diabetic child gives up on the medicine that keeps her alive? For author Louise Beech, the answer lay buried in her family history.

One evening eight years ago, I settled down with my ten-year-old daughter Katy for a bedtime story. But this was not the usual kind of tale a mum tells her child; it was not read aloud from a popular book. This was a story my grandma had told me bits of long ago. One that I had to use old newspapers to piece together. One I hoped would distract Katy enough to be able to endure multiple daily injections.

It was a serious illness that had brought us here. Three years earlier, when Katy was seven, she began to lose weight rapidly even though she was eating heartily. She drank lots, too, glugging endless bottles of water. She described her tummy as having ‘butterflies’ in it all the time. We had lost our home, car and belongings a few weeks earlier in the 2007 floods in Yorkshire, so I thought it was stress-related, but when she started lolling about as though she was drunk, we went straight to the hospital.

There, a simple blood test diagnosed Katy with type 1 diabetes. This condition – not to be confused with type 2 diabetes – has nothing to do with lifestyle and occurs when the body attacks cells in the pancreas, leaving it unable to produce insulin, which regulates blood-sugar levels. Those with this incurable life-threatening condition must test their blood sugar around the clock and inject insulin every time they eat. Debilitating hypos (which occur when sugar levels crash) must be treated with glucose, or they can result in a coma.

It’s a cliché to describe your world as stopping, but when I heard the word ‘diabetes’ it did. I gave up my job immediately to be with Katy. My son, Conor, was doing his GCSEs and I wanted to keep everything together so it didn’t affect his results. I hid my feelings to make sure my children didn’t have to deal with a useless mum.

Katy surprised us all. She faced her new regime of up to seven insulin injections a day with the resolve of a much older child. For three years, at least. Then came a moment far worse than her initial diagnosis. One morning she told me – as calmly as though she was saying she didn’t want cornflakes – that she wasn’t doing it any more. She didn’t want any more injections. She was going to lie in her bed and wait to see what happened. 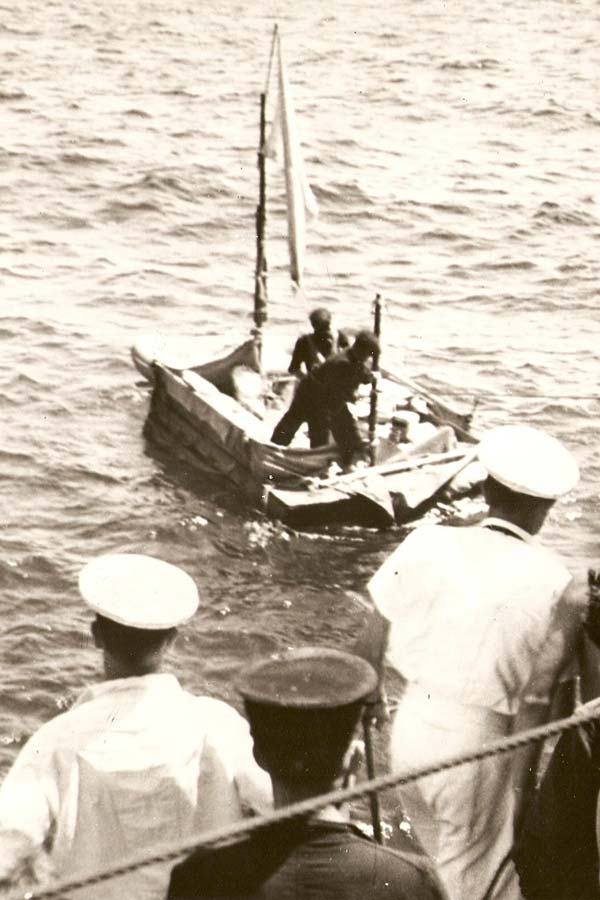 I knew what would happen without insulin. Her father and I pleaded with her, cajoled, begged, blackmailed, promised day trips and rewards. We forced her to have the injections, causing bruises and rage. I cruelly reminded her how ill she would be without insulin, then apologised desperately, saying I’d do anything if she’d have the injections. ‘There’s nothing,’ she said. No words can describe the futility of nothing.

After a really bad day, I went through some old photos, not sure what I was even looking for. Among them were newspaper articles, yellowed with age. My grandfather’s black-and-white face studied me. Headlines such as ‘Left to Drown’ and ‘Broke Honeymoon to Get Medal’ clouded before my eyes. I touched the fuzzy pictures of a lifeboat and handwriting on sailcloth. And I remembered the goosebumps I got as a child when I first heard my grandfather’s wartime survival tale, whispered to me by my grandma, feeling convinced that I heard the sea around us.

Then I realised this was something I could give Katy. I asked her if she would have the injection if I told her a story each time; if she’d let me inject insulin into her thigh and words into her head. She was an advanced reader, having loved The Book Thief and the Harry Potter series, but she didn’t look enthused. ‘It had better be good,’ she said doubtfully, ‘or else.

The pressure was on. How could I ease her physical pain with a story that I wasn’t sure I fully knew? How could I tell it the way my grandma had? I’d never even met my grandfather. I decided I would use what I could recall from my grandma’s personal account, the many newspaper reports and the lifeboat diary written on sailcloth. 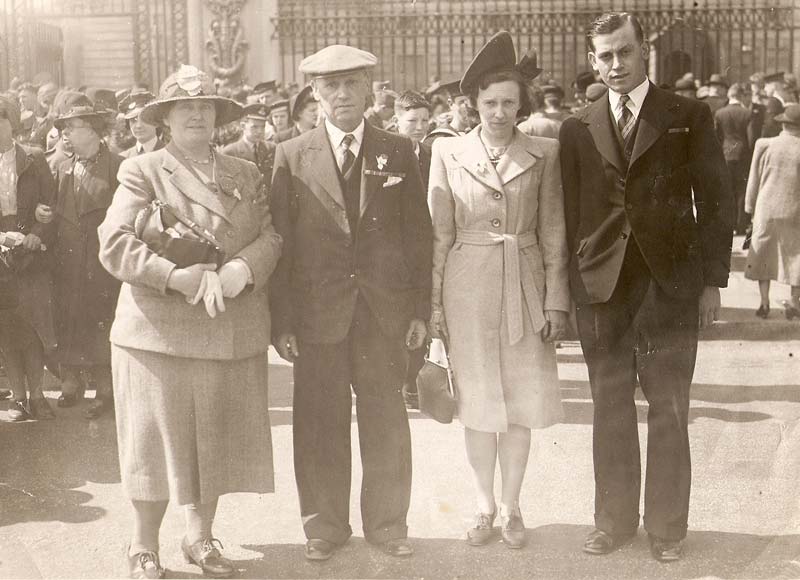 So, in the middle of my bed – it seemed a good place – I began. Katy endured an injection while I described the SS Lulworth Hill, a cargo ship that in March 1943 was carrying my grandfather – 21-year-old merchant seaman Colin Armitage – home to England. Some days after leaving port in West Africa, an Italian torpedo hit, sinking her in just two minutes. Colin was the first to make it to a tiny lifeboat designed for 12 men. The second aboard was the ship’s carpenter Ken Cooke. By the day’s end, 14 sailors had found its refuge.

For Katy’s next injection of the day, I told her how Officer Scown assessed that they were nowhere near the shipping lanes, and at least 800 miles from the safety of the Liberian shoreline. They calculated it would take 30 days to get there. The tiny biscuits, chocolate and tins of water they had must be rationed – one biscuit, one chunk of chocolate and a tiny cup of water per day. They decided not to eat anything until the following day to try to make it last that bit longer. We looked with guilt at our empty plates nearby. I asked Katy whether she wanted more of the story the following day. She shrugged, but I knew I had her.

We met again on my bed. I told her how Ken recorded the sailors’ experiences in pencil on the sailcloth, a diary that many years later ended up on display in London’s Imperial War Museum with other mementos, including my grandfather’s wallet and medals. On the second day, the men woke with swollen tongues and parched throats, and scanned the shimmering horizon for a ship or a cloud full of rainwater. Nothing. ‘I know that thirst,’ said Katy, remembering her symptoms. 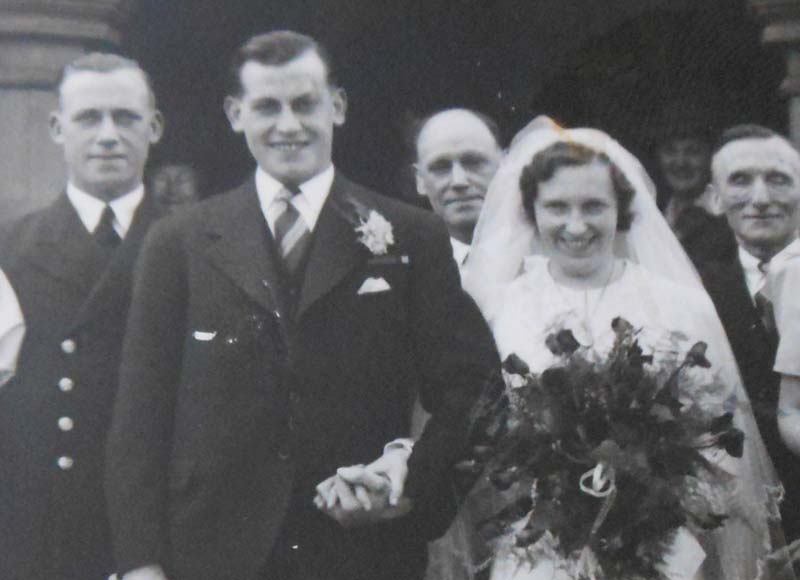 In the early days, the men squabbled: they were cramped and had to sleep in shifts, and there was no respite from the boredom and the suffocating heat. Our daily routine mirrored theirs counting waves, except Katy counted units of insulin. Each needle she barely acknowledged as we visited the sea. My bed was that lifeboat. The room disappeared. We imagined we could smell the salt. The crew got thinner and weaker as the days passed, just as Katy had done before her diagnosis. There was brief joy when they caught the odd fish, devouring it. Then agony when no rain fell, and the sharks that constantly trailed the boat circled closer.

I tried to imagine how my grandfather must have felt as he watched the younger men cry for their mothers. I recalled how I buried my own feelings to protect my children and imagined he hid his, too. John Arnold, who was 17, declared that only two of them would survive. He prayed daily for God’s help. On the eighth day, it began to rain and they thought he had answered them. The men licked desperately at the canvas, but it stopped as soon as it had begun. Katy had tears in her eyes. Day 19 brought the first death – Officer Scown.

My grandfather and Ken removed his wedding ring, which they would later hand to his wife. After that, others followed. Some downed seawater until it drove them mad. Some jumped overboard to be eaten by the many sharks. Some simply passed away sitting where they were, eyes forever looking for a ship. By day 35, only Ken and my grandfather remained. On a boat now caked in salt, the two young men drifted aimlessly, at the mercy of the South Atlantic currents and the cruel, relentless equatorial heat. They were two burnt-black skeletons with bleached hair, fat tongues and tattered clothes. ‘Two of them,’ whispered Katy. ‘And two of us.’ 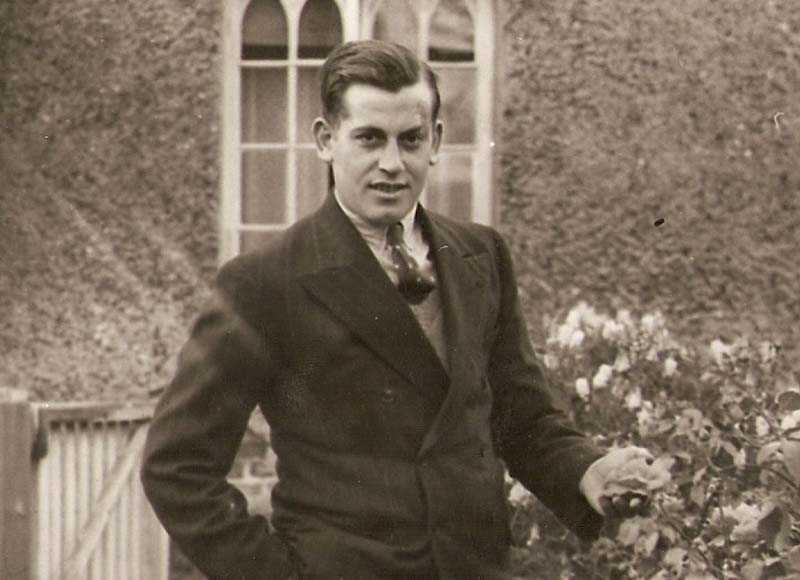 Fewer men meant slightly more food, though; slightly larger portions. But by day 46, the chocolate was gone; then the biscuits; and the next day the water, too. A plane passed but didn’t seem to see them. My grandfather suggested they tie themselves together and go overboard. The following day another plane dropped supplies – the most important being delicious, sparkling water. ‘I can taste it,’ gushed Katy.

We were near the end now. I began to dread it. Would Katy refuse her injections again? Would she go back to bed and wait to see what happened? Our 50th day of storytelling was also the 50th day on the boat. Delirious and probably hours from death, my grandfather was the first to spot the glorious sight of a ship on the horizon. He found the strength to help Ken to his feet and they were standing as HMS Rapid approached, having received word from one of the planes. My grandfather whispered, ‘A ship, a ship, a ship,’ over and over. ‘A ship,’ said Katy, softly. We jumped on the bed as though we too had been rescued.

The next day I feared Katy’s reaction to her first injection without the story. But she quietly did it herself. No argument. No fuss. Just as I had felt useless when we couldn’t get her to have them, I was now overwhelmed with relief. After that she never refused another. If anything, she pushed me away, wanting mostly to do it herself. She still has tough days – she always will – but never one where she wants to lie down and die.

Once rescued, my grandfather and Ken recovered in Cape Town, and then travelled home to Hull. My grandfather never went back to sea. He married his sweetheart, Kathleen, and they interrupted their honeymoon to go to Buckingham Palace where he received the George Medal and the Lloyd’s Medal for Bravery at Sea. He had three children – one of whom is my father – but sadly ill health meant he died at just 27. So I never met him…until Katy and I traded her blood for my words and felt like he was at our side.

Louise’s book How to Be Brave is based on her daughter and grandfather’s experiences. Her latest novel The Lion Tamer Who Lost is out now. To order both these books with 20 per cent off until 14 October, visit mailshop.co.uk/books or call 0844 571 0640; P&P is free on orders over £15.