If you’ve been looking for a solution that will really get to work on fine lines, your search could be over – and remarkably quickly at that.

A new product has just launched on the UK market which claims to reduce these visible signs of ageing in just 10 minutes, with impressive before-and-after pictures to back up its promises, and a waiting list of 5,000 purchasers who can’t wait to see the results for themselves.

Instant Effects’ Deep Line Elixir uses a combination of Nordic birch sap and a patented oxygen infusion technology to instantly plump the skin and reduce the visibility of fine lines and wrinkles – all in less time that it takes to use your average face mask. It also offers SPF15 protection, to shield against further environmental damage.

The use of birch sap is unique due to the fact it can only be harvested in the spring, with one tree producing up to 50 litres of sap. Birch trees pump the sap – the majority of which is collected for drinking – from the roots where it is stored the previous summer, into the buds in time for spring (hence the elixir’s extensive hydrating properties).

Along with ingredients such as fructose, glucose and sucrose, magnesium, zinc, and vitamin C, the complete formula works to repair the skin and increase collagen production, resulting in a restored, youthful appearance.

The British beauty brand say that their ‘game-changing’ launch can take years off a face by reducing frown, laughter and mouth-to-nose lines, with effects lasting up to eight hours from the first use. 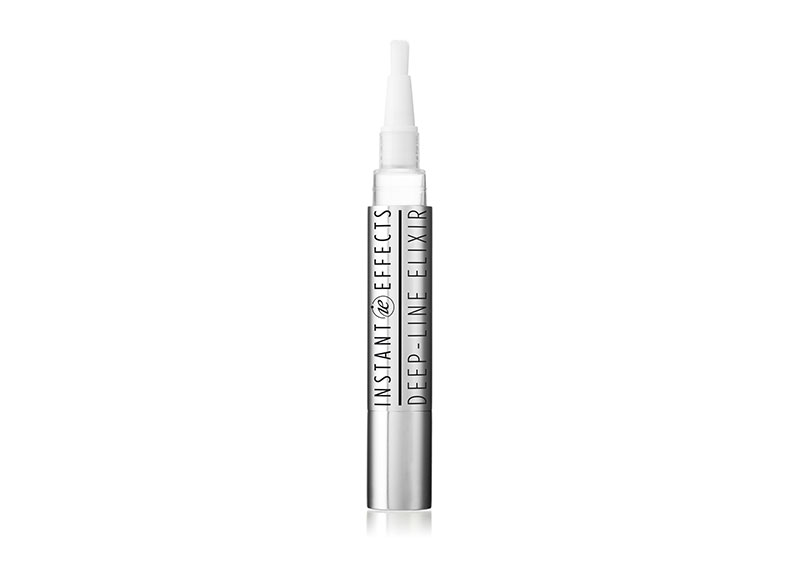 In an independent trial, Instant Effects found that testers of the vegan-friendly elixir reported up to 100% reduction in expression lines after 10 minutes, with 75% of frown and laughter lines diminished.

Instant Effects founder Richard Mears said of the launch: ‘Like all great discoveries it came by way of error as I actually thought of the concept when designing a cleanser. When I tested the mixture on the back of my hand, I was staggered by the after-feel and wrinkle eradication.’

‘With so many broken promises in the beauty industry I wanted to launch a product that had been independently clinically proven to work as a natural alternative to injectables.’

The formula took five years to develop, and according to Richard, ‘is set to become the only beauty product which can officially claim comparable results to cosmetic procedures.’

Victoria Beckham swears by this hair product for ‘no more frizz’

One of these £17 ‘miracle’ face masks sell every 15 seconds

Affordable skincare brand The Ordinary is now available at Boots

The Body Shop is giving away free advent calendars this weekend

BEAUTY KNOWHOW: Time to get tooled up