As a teenager, she survived Nazi concentration camps before dedicating her life to helping other trauma sufferers. Now 90, Edith Eger tells Lina Das how her indomitable spirit kept her alive.

Within seconds of our meeting, Dr Edith Eger has taken my hand and is giving me a whirlwind tour of her seaside home in La Jolla in San Diego, California. A psychologist who is internationally acclaimed for her work with war veterans, she treats patients at her home – a stunning house crammed with artworks featuring ballet, an abiding childhood passion. Though 90, she is hard to keep up with, zipping around and stopping only to admire the ocean view. ‘I am so blessed to be here,’ she says.

Considering Edith’s early life, ‘blessed’ isn’t the first word that comes to mind. Growing up in Hungary in a Jewish family, her dreams of being an Olympic gymnast were cut short during the Second World War when, at the age of 16, she, her parents and sister Magda were taken to Auschwitz, the concentration camp in occupied Poland. There she lost both her parents at the command of Dr Josef Mengele, the infamous ‘Angel of Death’. 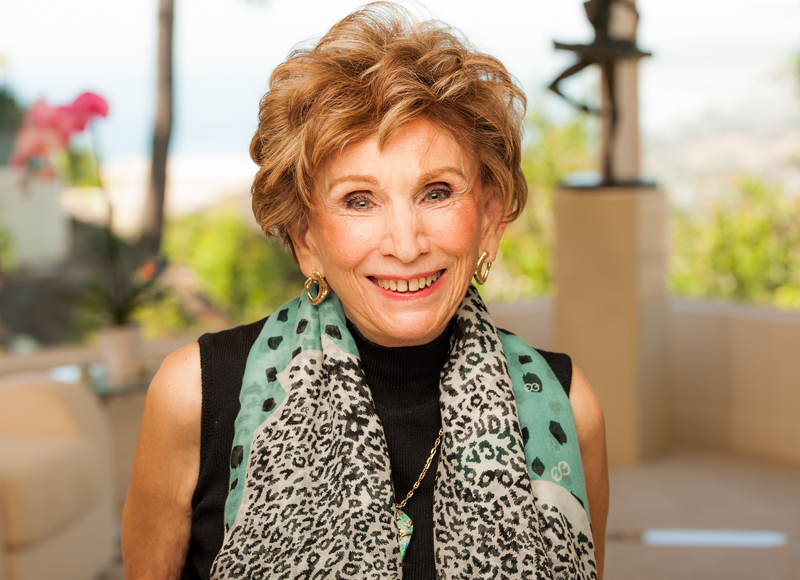 She remained in Auschwitz for a year where she endured beatings, starvation and the threat of rape. When, in 1945, American troops finally liberated the camp she had been moved to, she was found barely alive among a pile of corpses.

After the war, aged 19, she married Jewish businessman Béla Eger and the couple moved to the US, though she struggled for decades both with survivor’s guilt and with life as an immigrant. She now works as a therapist, specialising in patients suffering from post-traumatic stress disorder (PTSD), a subject she knows all too well. ‘I’m very grateful that I was able to find my inner strength in Auschwitz,’ she says. ‘They could beat me and torture me, but they could never murder my spirit.’

Immaculately dressed and perfectly made-up, Edith speaks softly, with a broad Hungarian accent, despite almost 70 years in the US. She smiles constantly and cries just once when recounting her story – one she has told in her remarkable memoir, The Choice. ‘I was at my book club this morning and the father of one of the women was liberated at the same time as me, in Gunskirchen [Austria]. I call Auschwitz my “cherished wound” because it taught me compassion. But I don’t live there [in my head] any more.’

Edith had never even heard of Auschwitz when, on a chilly April morning in 1944, soldiers came and transported her family to the camp – only Edith’s elder sister Klara escaped as she was studying music in Budapest at the time. Once at Auschwitz, Edith and her eldest sister Magda were separated, first from their father Lajos and then from their mother Ilona, on orders from Mengele, who told them, ‘You’re going to see your mother very soon. She’s just going to take a shower.’ It’s a moment that has haunted Edith ever since. ‘I give lectures all over the world on the subject of PTSD, yet I still have it myself – I still have nightmares about that time.’

That first evening, Mengele searched the camp for inmates to entertain him. Edith, forced to dance, performed so well that as a reward, he tossed her a loaf of bread, which she shared with her fellow prisoners. It was an act that was later to save her life.

Her descriptions of life in Auschwitz are horrifying. ‘I saw people being shot right in front of me,’ she says. ‘When people tried to flee, they were electrocuted in the barbed wire.’ Worse in some ways was the cruelty administered by some inmates upon each other. One girl, spying Edith as she was admitted to the camp, pointed to the smoke rising from the chimneys and told her: ‘Your mother is burning in there.’ ‘I just had to keep telling myself that if I could survive today, then tomorrow, I’d be free,’ says Edith, ‘even though I was told that the only way I would get out was as a corpse.’

Beatings were commonplace and the threat of worse was never far away. On one occasion, after watching Edith washing, Mengele ordered her to follow him naked into his office. But a phone ringing in the next room disrupted his plans. ‘I didn’t know anything about sex,’ she says. ‘I’d had a boyfriend, Eric [before Auschwitz], but I was a complete innocent. I sensed that I was in trouble, so when the phone rang, I ran away. I always wanted to believe there is a God and in that moment, I felt it. I found God in Auschwitz despite the horror.’ She also found pockets of joy there, such as the competition the young women prisoners held to see who had the best boobs (‘I won!’) and the irrepressible Magda who flirted with a young French prisoner while still captive. ‘She never lost her sense of self.’

In spring 1945, Edith and her fellow prisoners were moved from camp to camp during an enforced death march. So weak that she almost collapsed, Edith was carried by the same prisoners with whom she’d shared the bread thrown to her by Mengele. ‘They remembered and they carried me so I wouldn’t die,’ she says.

Edith ended up at the camp in Gunskirchen and after it was liberated, she and Magda were sent to stay with a German family to recuperate. Yet even here the horror didn’t end. One night a drunken GI liberator forced his way into Edith’s room with the intention of rape, until some unknown force stopped him.

‘He came back the next day and apologised,’ says Edith. ‘He kept coming back and brought me food, taught me how to walk again [during her incarceration, she had broken her back] and how to do the jitterbug, too.’

After the sisters returned home to Hungary, where they were reunited with their sister Klara, Edith started to recover physically, yet the mental scars proved more difficult to heal.

‘I was suicidal after Auschwitz,’ she admits. ‘My parents were gone, my boyfriend Eric had gone [he had died in Auschwitz just one day before liberation] and I felt I had nothing to get up for in the morning. It took time but I decided that if I lived, then it had to be for something, rather than against something.’

Soon after, she met and married Béla Eger, a Slovakian camp survivor, whose own mother had been killed during the war, and in 1949 they moved to the States. At times, Edith’s recollections of her life as an immigrant are painful to hear. On one occasion, after boarding a bus in Baltimore and forgetting to pay, she heard the conductor’s shouts and was instantly transported back to the camp where aggression was the norm, throwing herself down to the floor in incomprehension and fear. ‘I couldn’t bear shouting or the sight of barbed wire and even today I still feel those triggers. But now it’s fleeting.’

As she and  Béla settled into family life with their three children, they never told anyone about their past horrors, burying their pain but finding themselves ‘more psychologically imprisoned than before’ as the past continued to rear its head. Remembering his months of starvation in the camps, Béla would hoard food. ‘If I asked him to buy two potatoes, he’d buy 10lb – we always had to have enough food. I’m the other way – I’m very careful with what I order in a restaurant. I’ll finish everything on my plate and if you don’t finish yours, I’ll take it home with me as leftovers.’

It was during the 1960s, while Edith was studying for a psychology degree, that she reached a turning point. Given a copy of Man’s Search for Meaning – a memoir by fellow Auschwitz survivor Viktor Frankl – Edith was struck by its message: that everyone has the freedom to choose their attitude in any set of circumstances. ‘It was a real wake-up call for me to reclaim myself and not be a prisoner of my past.’

She gained a PhD in clinical psychology and became a therapist, using her experiences to help others and encouraging her patients ‘to feel the feelings, as you can’t heal what you don’t feel. I create an atmosphere with them where they are safe to feel everything. I cry with my patients and I meet them where they are.’

In 1980 she returned to Auschwitz to ‘perform the rite of grief that has eluded me all my life’. ‘Magda told me I was an idiot for returning, but I wanted to be free. I needed to go back to the lion’s den and stop running from the lion. When I was there, I saw a man in a uniform and thought he was a Nazi, but then I reached in my pocket and saw my American passport and began to recognise that I didn’t have to live there in my mind. I could choose to be free.’

Edith still had one more choice to make: whether or not to forgive herself. As a young girl entering Auschwitz with her mother and sister, she saw the women being ushered into two separate lines – the one to the left for those over 40 and under 14; the rest turning to the right. When Mengele asked Edith if Ilona was her mother or sister, she replied: ‘Mother’ and Ilona was immediately sent to the line on the left, for those sentenced to death. For decades Edith tormented herself with the thought, however unfounded, that if only she had replied: ‘Sister’, her mum might have survived.

‘Have I forgiven myself? I’m still working on it,’ she smiles. ‘Not only did I have survivor’s guilt, I also had survivor’s shame – but no one else was doing that to me. I was. We are our own worst enemies. I’m much better now, but I’m yet to arrive [at self-forgiveness].’ As humans, says Edith, We grieve not over what happened but what didn’t happen. I remember buying my granddaughter a dress for a dance and starting to cry. I couldn’t understand why until I realised it was because I never went to a dance when I was a young girl.’

Now, though, Edith dances to her heart’s content with her sprightly 93-year-old boyfriend of three years, Eugene. ‘We go swing dancing every Sunday.’ Béla [who died in 1993] and Edith had divorced and then remarried each other. ‘The first time I married him was as a girl. The second time, I was a woman.’

Edith tries to live in the present. ‘I don’t get into the coulda, shoulda, wouldas of life. I just say: what now? But I do believe I’ll see Eric again,’ she smiles. ‘I still think about him. And I’ll see my parents, too.’ What will she say to her mum? ‘Oh, I don’t need to think about that,’ she replies. ‘My mum is always with me.’

The Choice by Edith Eger will be published in paperback on Thursday by Rider, price £8.9