Marilyn Monroe’s stunning beaded dress was not the only old classic that got an outing at this year’s Met Gala. That traditional beauty favourite – red lipstick – also made a good show on the red carpet, although this year, the stars went for an edgier, sexier dark red – running all the way through to deep maroon – as an alternative to classic scarlet.

Carey Mulligan, Lizzo and Bridgerton star Simone Ashley were among those to rock dark red lips to the event, which added a moody, rebellious edge to the otherwise glitzy dress code of Gilded Age (which, as always, was interpreted in a myriad of ways by the invitees).

It’s definitely one of the easier make up looks to try from the Met Gala – we probably won’t be rocking face jewels to the office any time soon – and luckily, we know the exact dark red lipstick that Gigi Hadid wore alongside her maroon ensemble for the event. Even better, it only costs £11.99.

Gigi’s make up artist for the event, Erin Parsons, revealed that she used Maybelline SuperStay Vinyl Ink Long Lasting Liquid Lipstick for the model’s epic pout. Boots describes the product as ‘no budge vinyl colour that wears for up to 16 hours’, with a smudge-proof formula that fives instant shine. It is also enriched with vitamin E and aloe for a more comfortable feel. 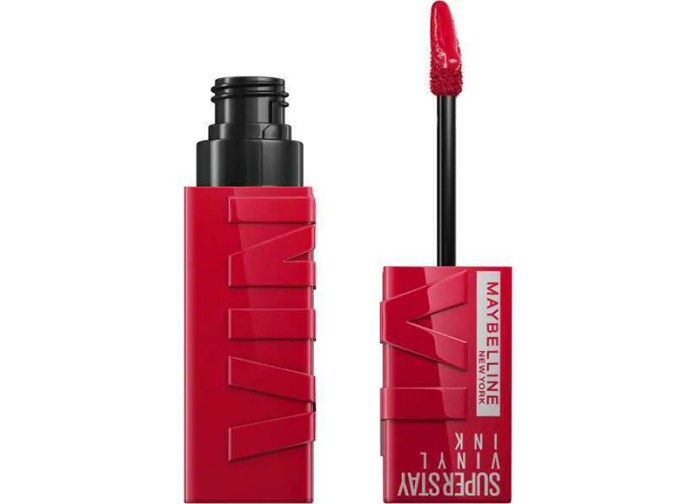 The dark red shade in question is called Wicked, although for Gigi’s look Erin also used another shade, Red Hot, in the centre of the lips.

Handily, Erin posted a full make up breakdown the day after the Met Gala, where she shared all the product she used, including Maybelline ColorSensational Lip Liner in Divine Wine to keep those lips looking sharp.

We’ll see you in the makeup aisle pronto!