We’re a good few weeks into lockdown now, and if you normally get your hair dyed at the salon, your roots are probably making themselves known. But there is a quick – and surprisingly affordable – way to disguise unwelcome regrowth, and it’s one that’s loved by none other than A-lister Eva Longoria.

In a candid Instagram post, the Desperate Housewives star filmed herself showing off visible greys in her usually dark hair, saying ‘if you’ve been following me, you know, I’ve been going grey – so I have my favourite solution!’

She then shows the camera her stash of several cans of L’Oreal Magic Root Cover (or Retouch, as it’s called here in the UK). The £6.99 spray is an instant root concealer that uses rich colour pigments to give perfectly blended coverage almost instantly, and according to Eva, it couldn’t be easier to apply.

‘This thing’s awesome because it has a little nozzle that makes it really specific,’ she says, before demoing the spray, which she estimates takes her ‘about 10 seconds’.

Now, Eva does have a working relationship as an ambassador with L’Oreal that we’d be naive not to point out, but we can’t deny that the results are seriously impressive, and we’re not the only ones who think so.

‘That stuff is amazing!! Your hairline still looks natural too!’ exclaimed one commenter on her post, while another agreed: ‘This is the best color root spray ever!!’ 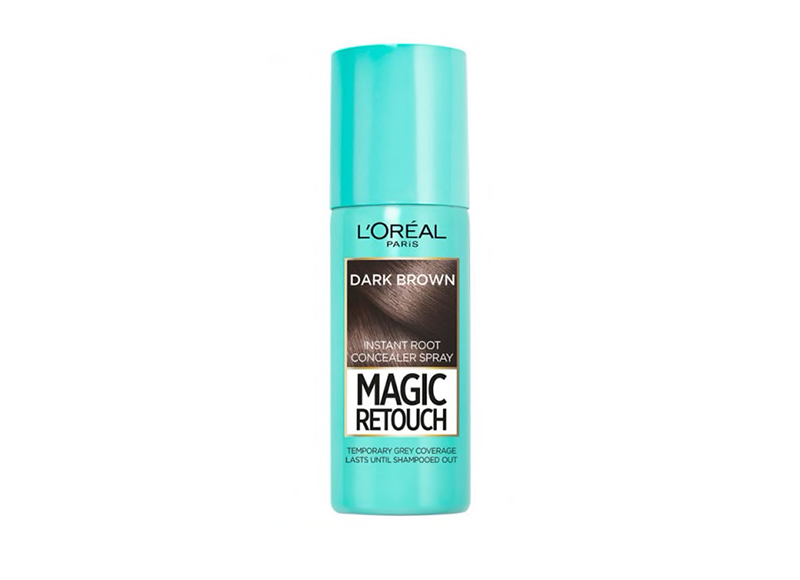 Several others said they were heading to buy a can asap, and as it comes in a choice of six shades, from blonde through to black, we imagine hundreds more will be following suit after seeing her speedy makeover.

Each tube contains around 30 uses, which stay put until you shampoo, so if you can get your hands on one now, you might just be able to extend the life of your colour until you’re reunited with your hairdresser once again.