‘It’s time,’ says Alexia Inge, founder of Cult Beauty, ‘to put the fun into fungi.’ Because in terms of beauty ingredients, right now ‘it’s all about the mushroom. It’s known to aid concentration and boost energy. It has been used in Chinese medicine for millennia and is found more in Eastern products, but we’ll start to see it more in both supplements and creams for its anti-inflammatory and moisture-retaining properties.’

Enter The Inkey List with its recently introduced Snow Mushroom Moisturizer (£9.99, boots.com) which is great for calming the skin. ‘Mushrooms are definitely a trending ingredient,’ agrees the brand’s co-founder Mark Curry. ‘But they’re possibly here to stay – it really depends on how much brands incorporate it into future launches, making it more accessible to consumers.’ The snow mushroom has other benefits too. ‘It targets inflammation and redness and packs a punch with hydration as it can hold up to five times more moisture than hyaluronic acid thanks to its small molecules. This means it can penetrate the skin deeply and quickly – your perfect hydrating hero.’

Of course, as Alexia points out, fungi aren’t new to skincare, they’re just having a renewed focus of interest. Shiseido has been on a mushroom trip since the relaunch of its Ultimune Power Infusing Concentrate range (from £50, johnlewis.com) in 2018. The products contain botanical extracts of reishi mushrooms to fortify the skin and its defences. Reishi mushrooms are also great for hydration and smoothing the overall texture of the skin, too. Shiseido’s Waso Fresh Jelly Lotion (£26, johnlewis.com) also contains snow mushroom, long treasured in Japan as food for beautiful skin. It holds on to water like a sponge, helping skin to look plump.

Origins is well known for its Mega-Mushroom Skincare, created in partnership with Dr Andrew Weil, and has now added Relief & Resilience Soothing Gel Cream For Eyes (£40, origins.co.uk) to the range. ‘Research demonstrates that some mushrooms possess antibacterial, antiviral and immune-enhancing properties. Additionally, studies on several mushroom species show that the use of anti-inflammatory varieties may help protect skin against damage from environmental stressors,’ says Dr Weil.

Why mushrooms push the packaging button

Natural skincare brand Haeckels has teamed up with eco design label Krown to create mycelium packaging. It uses the thread-like roots of fungi intertwined with industrial waste such as sawdust, flax and hemp husks. These grow around moulds and, once dried and fully encompassed, are used for the products. After use, it can be composted or planted to improve soil quality. Botanical brand Wildsmith also uses mycelium packaging for gift sets.

Get the do-good glow 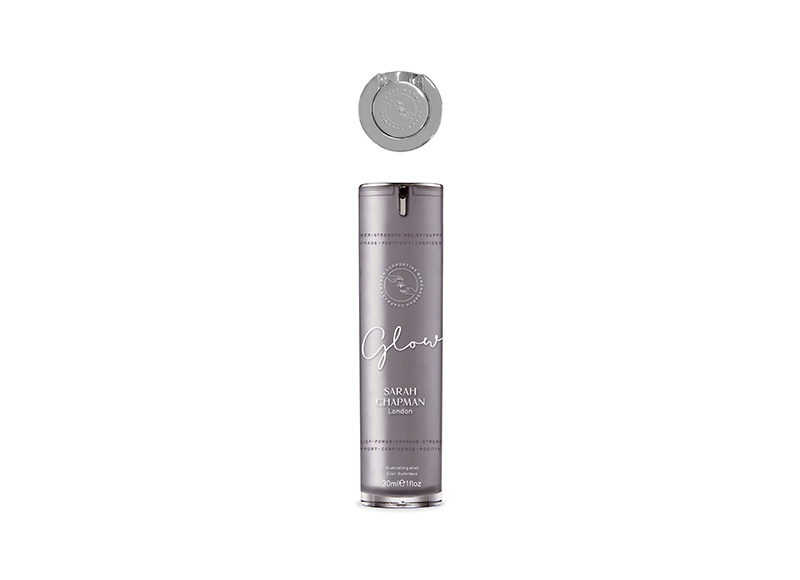 Is a beauty product going to change your life? In all honesty, it’s unlikely – though I’m the first to admit that the right one can easily boost confidence and lift mood.

But facialist Sarah Chapman hopes that her new Glow Illuminating Elixir (£64, sarahchapman.com) really will change lives. The limited edition has been specially created to raise funds (£10 from each sale) for the Prince’s Trust charity Women Supporting Women.

The organisation was launched after the Prince’s Trust found that fewer women than men participate in their programmes. Alongside this, 92,700 girls in the UK are now excluded from secondary school each year, and NHS data shows a 68 per cent rise of self-harm-related hospital admissions among girls under 17. What’s more, according to the Prince’s Trust Youth Index, overall wellbeing in young women is at its lowest since 2009. So you can see why Sarah felt it was a cause worth supporting. Her team also assists on beauty topics and she has offered to mentor those interested in a beauty career.

As for the product itself, it’s a serum oil with ‘loads of goodies, but also an aromatherapy blend with a combination of oils for boosting confidence. These include clary sage, which is good for grounding, and fennel to soothe’. Wear it day or night, under your moisturiser or on its own, for both an outer and inner glow.

BEAUTY BUZZ: How to reboot your resolutions

Clean beauty: 8 simple steps to clean up your beauty routine

This £18 Body Shop bronzing oil is being hailed as a...

Five of these bug-busting £3.50 body sprays sell every single minute

The expert’s guide to rainproofing your hair

People swear that this £6 perfume is a dead ringer for...