This Country star DAISY MAY COOPER overcame extreme poverty, setbacks and multiple sackings to write her own success story. She tells Cole Moreton why failure was the making of her.

Daisy May Cooper’s mum keeps a dead parrot in the freezer. ‘We’ve had arguments about this, because she’s got fish fingers next to it that she will give my kids,’ says the writer, actor and comedian in her warm West Country accent. ‘She’s a massive hoarder, including her own dead animals. That’s just who she is.’

Her deadpan horror at her mum’s behaviour makes this feel like a scene from This Country, the bittersweet mockumentary Daisy May wrote and starred in with her brother Charlie, inspired by their struggles with poverty growing up in a Cotswolds village. She still lives near Cirencester, having married landscape gardener Will Weston and given birth to Pip and Jack, aged three and one. But the couple recently split up and Daisy May’s career is soaring in a way dead birds don’t, so Granny helps out with the kids. She lives five minutes away, with Claude in cold storage wrapped up in gold tissue paper.

‘It’s so mad,’ says Daisy May, chuckling. Claude is one of the weird confessions in her new memoir Don’t Laugh, It’ll Only Encourage Her. Daisy May is in very high demand after This Country, with recent roles in the movie The Personal History of David Copperfield, and as a captain on the revamped Never Mind the Buzzcocks. But the book is about the 30 or so years before any of that happened, from her hapless school days to failing to make it as an actor, all the while struggling against despair and extreme poverty.

Her father Paul was the breadwinner in the house but when he was made redundant from his job at a sales company there was suddenly no money coming in. Her parents struggled to find work – Paul also suffered a heart attack during this time – and ultimately they had to sell their home. As the money from the sale dwindled, the family were barely able to pay the rent and came close to being made homeless. With no money to put in the meter, Christmas was by candlelight. 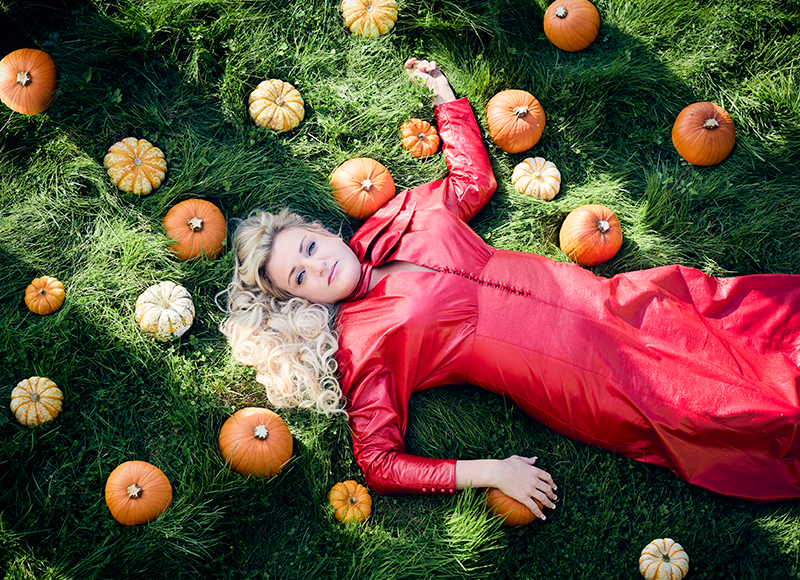 ‘There was no plan B for me,’ says Daisy May. ‘It was all or nothing. I genuinely think I would be an addict if I hadn’t done this. I’ve been fired from every job I’ve ever had. There’s nothing else I can do.’ Daisy May got the chop from Costa for scoffing pastries and was sacked from a department store for smashing the Lindt chocolate Santas so she could eat them as damaged goods. ‘I look back now and I think: “I could have got arrested for that.” It’s like when I put sleeping tablets in my parents’ tea so I could see my boyfriend. I could have killed them. I made all these mad, bad, impulsive decisions. There was such a fine line between making it and going to prison.’ Sometimes the stories are heartbreaking, too. There’s the time Daisy May went for a job as a dancer in a club, only to discover too late that it was really for a stripper. Painfully aware that she didn’t look like the other girls in the room, she was desperate enough for cash to go through with it anyway, even snogging the pole. The DJ cut the music. ‘Silence falls like snow. Deadly and cold.’

By writing all this down she turns a horrible, damaging memory into something that brings smiles. ‘I was going to take the story to my grave, then I went on a show with Romesh Ranganathan and it just spilled out.’ That clip has since been viewed 16 million times. ‘I thought: “It means something now. This is not just a bleak thing that happened to me.” Doing this book was like therapy.’

So what would she say to the young Daisy if they could meet? ‘I’d say: “Just be a bit less of a slag.” Because some of the blokes were awful.’ Her boyfriends are covered in hilarious detail in the book, but the one man Daisy May won’t talk about is Will, who she met on Tinder in 2015. They wed in 2019 but split up earlier this year. When I ask about this she says she’s not ready to talk about ‘any of the marriage stuff’. It’s clearly very raw.

In the book she talks about having body confidence issues as a young woman, so at 35 have they gone away? ‘Confidence remains an issue. I got myself hair extensions because I’ve always wanted ones that are properly done not just bought online. And I’ll have a spray tan. But I’m not vain.’

Her next project is a series about toxic friendship with her real-life friend Seline Hizli, who she met at drama school. After that will be Skint Estate, a TV series based on the memoir by Cash Carraway. ‘That’s the problem with having been skint: you become a workaholic, because you’re so frightened of the work going away.’ 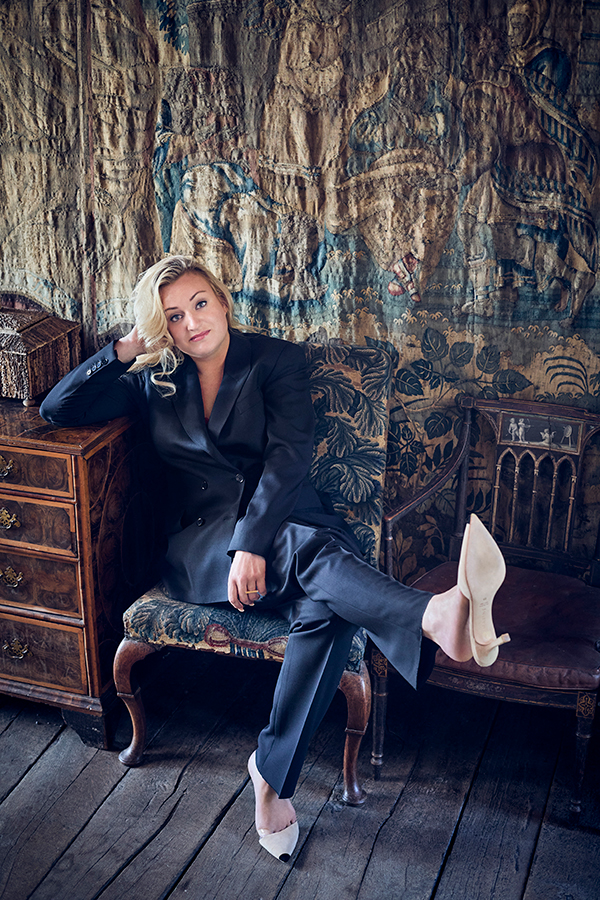 It’s not so long ago that she was too broke to print off a script for an audition for Call the Midwife and had to go there in broken sandals wrapped up in gaffer tape because she couldn’t afford new shoes. Then there was the Doc Martin debacle. After years of trying, Daisy May finally landed a part with four lines and travelled down to Cornwall in 2011 on the production company’s ticket; but she had no other cash at all and her mum was on the phone begging her to sort out yet another payday loan so the family wouldn’t be evicted from their home. This was meant to be her big break, but real life was suffocating. Daisy May cracked under the pressure and fluffed the lines several times, before being ushered off set on the edge of tears. ‘It was seeing the expression on Martin Clunes’s face and thinking: “I’ve b***sed this up.”’

One good thing did happen there, though. Daisy May got talking to fellow actor Jessica Ransom who told her she had been writing her own material – creating a character only she could play. Suddenly Daisy May could see a way forward, telling her own story. ‘I didn’t know such a thing was possible.’

Back in the Cotswolds, Daisy May and Charlie began to write and film sketches based on characters around them. They initially impressed people in the industry, but then had years of being ignored. She doesn’t hold back in the book from naming those who treated them badly. But isn’t it dangerous to burn bridges like that? ‘No, because I want people to know there are those in this industry who will take advantage. When you’re new, you’re extremely vulnerable.’

The pair worked on a pilot for three years but were then dropped by both ITV and the production company, which claimed the rights to their characters. Charlie took it very badly and his reaction scared her, she writes: ‘Mum and I remained on suicide watch for several days.’ Daisy May tells me she was on the edge herself. ‘I was desperate. It was just so awful to be so poor you don’t even feel human any more. You don’t have any choices and you don’t have any respect for yourself.’

The siblings were sleeping on the same broken mattress in their parents’ home in Cirencester. They’d been sacked from their jobs as night cleaners and their dad was still out of work, so there was no money at all in the house. With nothing left to lose, she wrote a letter begging for help from one of the few people who had shown a glimmer of understanding: Shane Allen, director of comedy at the BBC. Within weeks he had negotiated their rights back and commissioned the first series of This Country.

The meanderings of Daisy May and Charlie’s characters– cousins Kerry and Kurtan – and the oddballs all around them are sad and funny, like The Office set in a little village. This Country won Baftas for the writing and for Daisy May and Charlie’s acting. How do their parents feel about it all? ‘They’re amazing. They let us keep trying.’

Has she bought them a house? ‘I’m not at that stage yet. But not having to worry about money every day is like all the chains have been taken away. I could go into Tesco now and buy whatever I want without waiting for the reduced items to be put out at five o’clock.’

Not that she feels entirely secure in her newfound fame. ‘Every day I wake up and think: “I am going to get cancelled today.” There is that fear that I’ll say the wrong thing and upset everyone.’ And you have to say there is a risk of that, given how freely and riotously Daisy May loves to talk. But the main target of her jokes seems to be herself. ‘I’m very self-deprecating because if I take the p*** out of myself first, you can’t.’

There’s another reason for getting her dirty washing out in public with the book, though: to help others. ‘When we were desperate I’d read Peter Kay’s autobiography to see how he did it. I was fascinated with the bad stuff that happened, because it gave me hope.’

She would love her new book to do the same. ‘I hope there’s somebody out there who can say: “Well, I don’t feel as bad now, because I see Daisy Cooper is such a massive f*** up.”’ And with a roar of laughter she hurries off to the next thing, turning her trials into triumphs and finally living the life she dreamed of for so long.