Q: My husband is having chemotherapy for bowel cancer. Is it true that turmeric can be helpful with the outcome?

A: Turmeric, known as the golden spice, has been recognised in Ayurveda, the traditional medical system of India, for millennia. With powerful anti-inflammatory and antioxidant properties, the root – a relation of ginger – is used to treat a host of ailments including arthritis, back pain and respiratory problems.

More than two decades ago, a colorectal surgeon in London told me it could help reduce polyps in the bowel, which are almost always the forerunners of colon cancers. Now researchers are looking at the potential of giving curcumin, the active ingredient in turmeric, to stop bowel cancer developing or coming back after surgery, as well as enhancing the effectiveness of chemotherapy.

Cancer researcher Professor Karen Brown of the University of Leicester and her colleague Dr Sameena Khan, an oncologist who has also studied curcumin for bowel cancer, tell me that ‘it definitely works in laboratory models to stop the cancer cells dividing so it prevents the tumour growing and spreading’. One possible mechanism is that curcumin acts on the cancer stem cells within the tumour. ‘These cells drive the development and possible recurrence of cancer tumours, but they are resistant to chemotherapy and radiotherapy. Curcumin causes the cells to die [called apoptosis], or to differentiate so they no longer act as cancer stem cells,’ explains Prof Brown.

There is evidence of benefit in small human trials, but bigger trials are needed. However, Prof Brown and Dr Khan have just seen the results of their own trial on patients with advanced bowel cancer. ‘We wanted to see if it was safe, did not cause side effects or interfere with standard chemotherapy. The good news is that the trial, which was led by researcher Dr Lynne Howells and should be published this winter, confirmed this,’ says Prof Brown.

If one of her family had advanced bowel cancer, Prof Brown says she would recommend curcumin alongside standard treatment. The trial dose was two grams daily. One product option is Lamberts Curcumin Ultra (£35.95, victoriahealth.com), which is highly absorbable. Better You Turmeric Oral Spray (£17.95, victoriahealth.com) has also been shown to be well absorbed, and avoids the patient having to take more pills. (The dose for two grams is six sprays, which can all be taken at one time.)

These products contain three active curcuminoids but not the many other compounds in the root. Ayurvedic practitioner Sebastian Pole of Pukka Herbs says, ‘both history and science show the whole root is more potent’. Pukka Herbs is collaborating in a clinical trial in Israel where a group of patients with colonic polyps are taking four to eight capsules of Pukka’s Wholistic Turmeric (£16.96, pukkaherbs.com) daily, to compare changes in the number and size with a matched group taking a placebo.

Turmeric may help in other types of cancer, with the best effects on breast, stomach and skin cancer cells, according to Cancer Research UK. A recent trial in Italy showed ‘quite impressive results in pancreatic cancer’, according to Prof Brown. Last year, The British Medical Journal reported the case of a patient with end-stage myeloma whose doctors agreed that curcumin had helped keep her blood cancer at bay after years of invasive treatment failed. 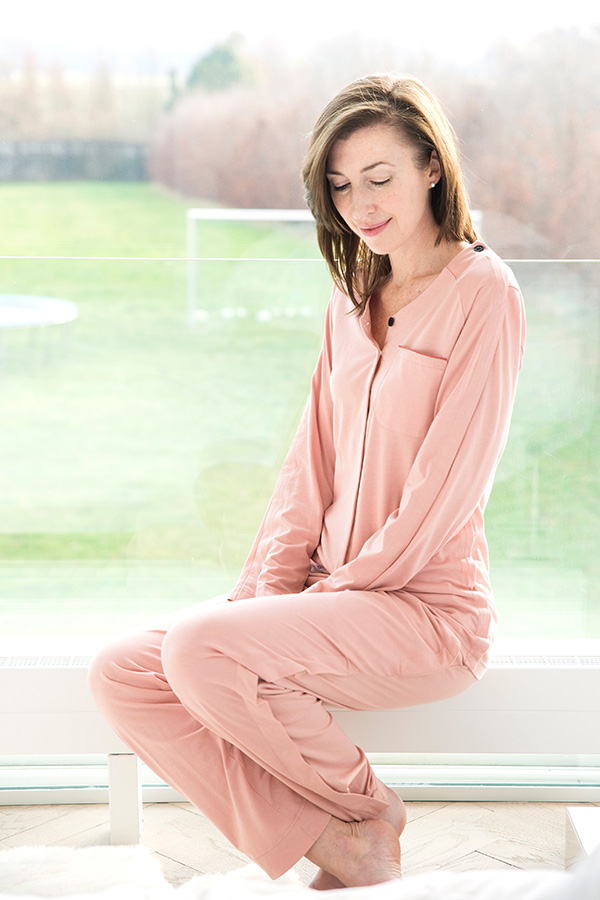 Staying in hospital can be a challenge when it comes to getting dressed. The Inga Wellbeing patient clothing range includes jersey tops, trousers and dresses with popper openings for IV lines, drains and monitors. For an elegant pyjama set, try the women’s T-shirt and trousers in dusky pink (above, £129.90). Our male tester was delighted with a soft long-sleeved top (£59.95) and matching trousers (£69.95, all ingawellbeing.com). However, it did take him a few minutes to work out the fastenings.

In 1998, Sara Davenport founded the charity Breast Cancer Haven, which set her on a quest investigating holistic health and healing to help everyone live better. Her new website, ReBoot Health, offers practical information on a range of topics, supported by scientific research plus the opinions of doctors and patients, as well as Sara’s own
experience. Sara’s book, Reboot Your Health, is published by Hay House, price £12.99. To order a copy for £10.39, go to mailshop.co.uk/books.