Writing an explosive memoir that questioned her strict upbringing wasn’t easy for ANITA RANI. But, one year on, she’s paving the way for the next generation of Asian women. And, she tells Julia Llewellyn Smith, her biggest cheerleader has been her mum. PHOTOGRAPHS: DAN HACK

Anita Rani is nursing a vodka and soda in the corner of a busy pub near her home in Hackney, East London. She’s led me there from the YOU photoshoot in the startlingly rural Walthamstow marshes where she walks her adored bedlington whippet cross Rafi – ‘I know all the other dog-walkers’ – then along the banks of the River Lea. ‘You wouldn’t believe we’re in London, would you?’ she says. ‘I love sharing my neighbourhood with visitors.’

Finding a slice of countryside in one of the capital’s most urban corners is quintessentially Rani – embracing opposites is what she’s all about. Over the past 20 years she’s established herself as one of the most versatile TV and radio presenters – from dancing into the 2015 Strictly semifinals, to last year joining Radio 4’s Woman’s Hour, or hiking across fields on BBC’s Countryfile, which she’s presented for seven years.

Yet for decades there was one thing Rani, 44, was more reluctant to do: draw attention to a key facet of her identity, that she’s a British-Asian woman whose parents had emigrated to Bradford from India in the 1970s. ‘People often didn’t know what to do with me,’ she says of the television executives she encountered starting out. ‘There wasn’t anyone like me around.’

Rani decided to make as few references as possible to her ethnicity. But in the past few years, that’s changed. Take her decision to wear a saree – her community’s traditional mode of dress – to host last month’s Platinum Jubilee celebrations for the BBC.

‘I didn’t think, “Ooh, I’m going to make a point”, I just felt it was the right time,’ she says, eyes shining with happiness at the memory. ‘For so many years I was made to feel shame: “We can accept you in Western clothes but you need to tone the Asian side down because no one wants to deal with that.” But now I think being able to move between two cultures is a gift. With the Jubilee, I thought: “When else am I going to have a moment like this?’’

‘The reaction was incredible,’ Rani continues. ‘Someone messaged me saying: “My mum cried when she saw you on screen – she was a doctor in the 1970s and wasn’t allowed to wear a saree on the ward.” I came out of the BBC the other day and one of the black, male security guards stopped me to say, “Well done.” I mean, it’s nothing, it’s just wearing a saree, but at the same time you have to take a stand. Sometimes people don’t want [Indians] here and I have to turn around and say, “This is Britain now – so sorry, get over it.’’’

Rani is great company – fun and empathetic but also super-fiery. ‘I can be,’ she says unabashedly. ‘A few years ago someone called me “the sunniest TV presenter” and I was like, “Hmm.” Yes, I am, but I also have the bit between my teeth to make sure things are easier for the next generation.’

Her new ‘take-me-or-leave- me’ attitude is manifesting itself in all sorts of ways. For example, Rani’s decision to conduct an interview in a swimming costume for her upcoming second series of Channel 4’s Britain By Beach, where she explores UK history through visiting our beaches.

‘I was in Dover doing an item on Channel swimming and the sun was out. Ordinarily I would have sat there covered up but this time I decided to do the interview in my costume. It was quite a moment. I’d spent my entire life worried about my body, never getting into bikinis in my 20s and 30s when arguably my body was at its finest. I had this dysmorphia of thinking I didn’t look good enough. We all do it, it’s so distressing. [Women] waste so much time worrying about their bodies when there are much more important things to be thinking about. So now I think, “Sod it.’’’

This decision to live her life unapologetically was influenced by Rani’s observing the outspoken under-40s. ‘We’ve got a younger generation who are confident in their identity and will be who they want to be. I look at young kids now and think, “Oh my god, amazing!’’’ she says.

Yet the biggest catalyst came last year when Rani released her memoir The Right Sort of Girl – which is out in paperback this month. Rather than the usual celebrity flimflam, it’s dazzlingly frank and very moving. Rani says. ‘The day before it came out, I wanted to crawl into a hole and destroy every copy because it’s so exposing and I’m really quite private. I phoned a good friend who gave me my first break in TV and said, “I can’t believe I’m about to do this.” He said, “How would you feel if it was a plain memoir of a girl who moves to London and everything is great?” I replied, “That would be a waste of time.” Now I feel vindicated and relieved because the reaction across the board – but particularly from Asian women – has been immense. [They tell me] “Finally someone has said it!’’’

Hundreds of women confided in Rani about how much they related to her account of growing up with her parents who ran a clothes business and always urged her and her younger brother to integrate into British life. At the same time, she was expected to remain a ‘good’ Indian girl, in a patriarchal culture where it was acceptable for her grandmother to announce when Rani was born, ‘We don’t celebrate girls’, and two of her aunts were ‘traded like a commodity’ with arranged marriages they didn’t want. ‘Men are put on a pedestal and you have to walk on eggshells around them,’ she says. ‘So it felt so good to say, “And another thing! And another thing! And don’t favour boys and sons!’’’

How did Rani’s mother Lucky feel reading about her daughter’s anger over the absence of conversations around things such as periods, or her constant nagging to find a husband, as if her daughter’s career achievements counted for nothing?

‘The book’s probably the best thing that’s happened to our relationship. My mum’s amazing, she recognised I was carrying a lot and said, “I want you to say these things – you need to get them off your chest.” She also said, “Tell them I did these things and I was wrong – and if you don’t shout about it, nothing will change.” She’s apologised for certain things – not that I wanted or needed her to. Now she’s like, “Yes! go on, my girl! Tear down the system!’’’

When Rani began pursuing a career in TV, many in her community were horrified she wasn’t following the traditional doctor/ pharmacist/lawyer trajectory. ‘They thought I was mad.’

Now, of course, she’s feted as a role model. ‘I know!’ Rani shrieks. ‘I find it hilarious because I’m the most rebellious person, nothing like the dutiful Indian daughter I was brought up to be. I remember as a kid hearing women saying, “We’ve found a great bride for this boy. She doesn’t say a thing. So quiet.” How is that a good thing? She doesn’t speak! So if I am a role model, bring it on.’

Even if Rani was a self-confessed ‘nightmare teenager’ who boozed and dated white boys, she’s still a devoted daughter – a few years ago helping her parents find a house in London to be nearer to her.

Her feminist views were entrenched when in 2015 she filmed the ancestry programme Who Do You Think You Are? Rani wept on camera, discovering what happened to women during the chaos of the Partition in India in 1947. ‘They talk about intergenerational trauma. All of a sudden, it exploded inside me. I realised that for generations, these women had no choice or say. I felt from that point on I was going to exercise mine.’

Honouring those disempowered women has had a huge bearing on everything Rani now opts to do. Having been asked endlessly by both family and strangers when she’d have babies, at the end of 2018 she suffered a miscarriage. ‘It was – and is – incredibly sad,’ she wrote in a piece, which marked the beginning of her new campaign for honesty.

When I enquire if children are still on the cards, for the first time she shifts uncomfortably in her chair, her huge eyes filled with sadness. ‘Oh, the child conversation,’ she sighs. ‘When you’re growing up, there are a lot of expectations on women to be a certain way. But I feel the older I’m getting, the more I defend women’s rights to do whatever they want, whenever they want.

‘What writing the book did was solidify [my belief to] just live the life you want to live. Enough doing what everyone else expects. Do what you want – whether it’s having children, being married or not. You can own it. I have my dog and my music. They make me happy.

‘Anyway,’ she continues, laughing as she tries to lighten the mood. ‘I’d be too tired to have a kid now. It would be exhausting.’

It’s hard to imagine Rani tired. On the day we meet she’s been up since 5.15am to stand in for Dermot O’Leary on Radio 2 and later – despite a wobble about whether she’d be better enjoying a night in – she’s heading to see the Red Hot Chili Peppers at the London Stadium.

Workwise, it never stops. She’s busy writing another book (fiction this time) and hosting a new ITV gameshow Fastest Finger First, a spinoff of Who Wants To Be a Millionaire’s first round, where contestants put their answers to a multiple-choice question in a specific order. The prize is a coveted – guaranteed – place on Millionaire itself. 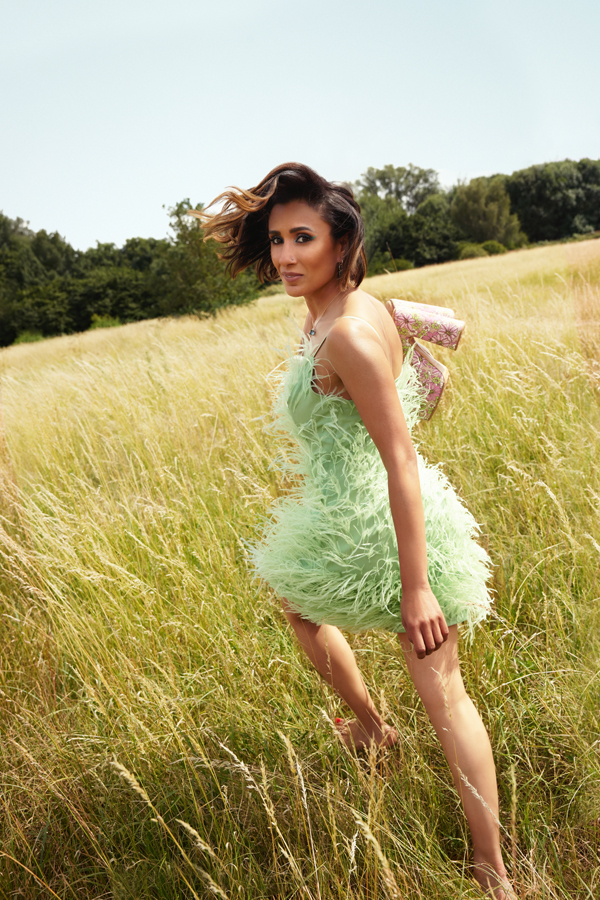 ‘I loved it because finally I’m doing a quiz but also it’s glamorous.’ After all, light entertainment has always been Rani’s dream, not least because there are so few Asians presenting the ‘fun’ stuff. ‘There are all these stereotypes about Asian women – that we’re square and clever. At every single point in my career when someone has said to me, “Do you fancy presenting the news?” I have actively said, “No, my passion is music, entertainment.” They’re spaces where you don’t traditionally see Asian women. Countryfile has certainly taken me where no Asian woman has been before – to a field on Sunday night on BBC1.’

If she has so much energy, it’s partly because she’s finally been released from conforming to everyone else’s expectations. ‘It’s really exhausting to try to be many things for many people – I just want to be myself now,’ Rani says. ‘I used to suffer from imposter syndrome. But now I know I’ve earned my stripes.’

The Right Sort of Girl will be published in paperback by Blink on 21 July, £9.99*. Fastest Finger First begins on Monday 29 August at 4.30pm on ITV and ITV Hub

Susanna Reid reveals the two simple changes that led to her...