We’re all supposed to be in the business of forgiveness. But, says lifelong grudge-bearer Laura Craik, what if letting it go just isn’t your thing?

‘Some wounds run too deep for the healing,’ quoth Professor Dumbledore in Harry Potter and the Order of the Phoenix. He was talking about Severus Snape, but he could equally have been talking about Larry Kimball. One is seemingly the most evil character J K Rowling ever committed to paper; the other, a five-year-old boy.

Oh, the teacher might have been deceived by Larry Kimball’s angelic mop of curly blonde hair, but he was the devil – a 3ft 6in demon of malicious intent.

Larry Kimball knocked down my Lego tower. And, for that, he is dead to me. 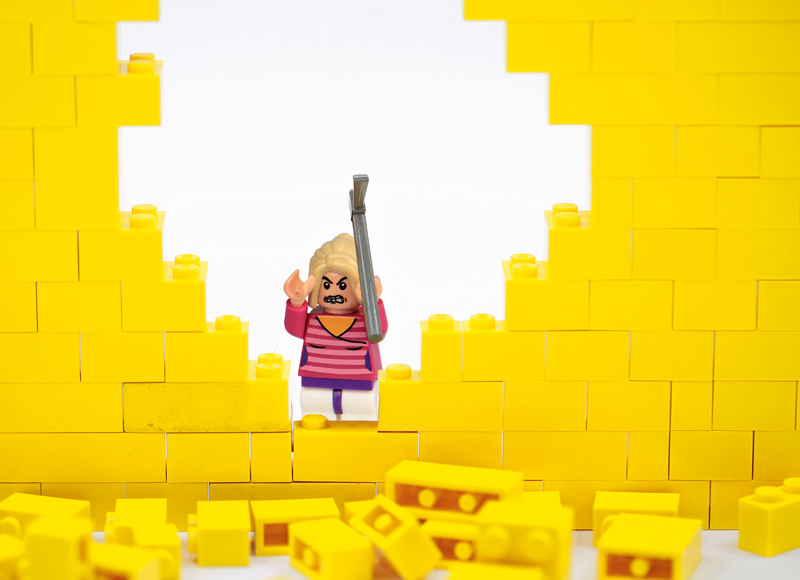 Although this incident happened in the 1970s, it has stayed with me. The rancour endured all through primary school, all through secondary school and all through my university years where, thankfully – finally – Larry Kimball was no longer in my class, my face or even in my country.

Improbable as it might sound (unless you’ve met me) I managed to avoid speaking to Larry Kimball for the remainder of my education, despite the two of us frequently being in the same class and sharing the same friends. How did I manage a feat of such unfeasible, unyielding obstinacy? Simple: I am an Olympic-class grudge-bearer.

The internet might be full of memes claiming that holding a grudge is like letting someone live rent-free inside your head; that weak people hold grudges, but strong people forgive; that holding on to a grudge is like drinking poison and expecting the other person to die. I contest that these trite, fridge-magnet sentiments hold little sway in real life. Grudges and anger go hand in hand: you can’t hold one without having experienced the other.

To quote the former Sex Pistol John Lydon, anger is an energy. When someone has wronged you, anger is a natural reaction. If the wrong was particularly egregious, a strong and enduring grudge may be formed– particularly if the culprit is unwilling to acknowledge or take responsibility for their wrong.

So what made the Lego tower incident so unforgivable to my five-year-old self when some other children could have shrugged it off? According to Dr Akshay Kumar, senior lecturer in psychology at the University of East London, it’s likely to be because my grudge had other emotional components attached, such as jealousy, fear or sadness. This, coupled with my youth, meant I was unable effectively to process my feelings. ‘Some people are  able to let grudges go because they are more resilient to negative emotions,’ he explains. ‘This means that they are more reflective of their feelings and are able to identify whether something is worth holding on to or whether it is harming them.’

At 42, my friend Catherine worries that she’s been holding on to her own grudge for too long. No one would blame her for hating the woman for whom her ex-boyfriend upended their life, but after five years, she’s still unable to move on. She blames social media for allowing her grudge to fester, explaining that it’s hard to find closure in the Instagram age, when every holiday snap and Christmas tree picture twists the knife afresh (‘the b**** even has the same Whistles dress as me,’ she once sputtered. ‘What are the odds?’).

It’s a common situation – which of us hasn’t hate-followed someone?– but one that Dr Kumar warns can be toxic. ‘Unhealthy emotions from grudges can linger in the mind, and the longer they are held, the more likely they are to become a part of someone’s day-to-day life. This includes projecting these feelings towards themselves and becoming critical of their own personalities or characteristics. If someone is unable to let go of a grudge, they should seek a therapist who will help them develop ways through mindfulness or positive thinking to become more resilient to these negative emotions.’

It doesn’t take a degree in neuropsychiatry to work out that lockdown has had a detrimental effect on life’s bitterness-bearers. Robin, 37, who describes himself as a serial grudge-holder, says he found one particular grievance taking hold last winter, against a colleague who he felt had won a promotion using unfair means.

Professor Sophie Scott CBE, director of the Institute of Cognitive Neuroscience at University College London, agrees that grudges are more likely to fester and grow when people are taken out of their workplaces and denied the usual channel of face-to-face communication that might resolve them. ‘Working from home during lockdown, and the associated fears and restrictions of the pandemic in general, have made grudges more likely because you are not bumping into colleagues or exchanging pleasantries,’ she says.

It brings to mind the words of William Blake:

I was angry with my friend;

I told my wrath, my wrath did end. I was angry with my foe:

I told it not, my wrath did grow.

It’s a sentiment with which Robin would certainly agree, shamefaced as he is about the death-stares he’d direct at his colleague during the many Zoom meetings their team conducted over lockdown.

If the drawbacks of a grudge are manifold, can they ever be a good thing? ‘From a psychological outlook, negative emotions are not entirely bad,’ says Dr Kumar. For example, you wouldn’t feel happy if you didn’t know what sadness felt like. All emotions that we feel are built from our personality and circumstances, and negative emotions have a purpose– it just depends how we use them. One positive of holding a grudge is that there’s an opportunity to move on and forget.’

I think about my own grudges. The ones shored up against a university friend after decades of micro-aggressions. The grudge against a former boss for his intimidation and lies. Newer, keener grudges on behalf of my daughters, which have an especially tender sting. Can I move on and forget?

According to Professor Scott, the fact that I can’t might be a mark of my intelligence– or, rather, lack of.

‘There is interesting psychological evidence that wiser people are more likely to let infractions go, especially minor ones. People who are more agreeable, and more open to new experiences, are more likely to forgive,’ he says. And forgiveness matters. ‘In successful long-term marriages, spouses reported that the willingness to seek and grant forgiveness is one of the most important factors contributing to relationship satisfaction and longevity. As the song says: ‘Let it go’.

To be fair, I did eventually forget – or at least forgive– Larry Kimball, even if it took me 30 years. He turned up at the birthday party of a mutual friend’s child, two blonde-haired kids in tow. As I watched my own kids scooting around near his, it felt ridiculous to have nursed my grudge for so long. So I took a deep breath, gulped some prosecco, and told him. How we laughed. He couldn’t remember the incident at all. ‘Um, is it too late to apologise?’ he said, and we laughed a bit more.

I’d love to say we kept in touch after that, but we didn’t. I haven’t seen him since and doubt I ever will again. But my grudge disappeared, and I felt lighter.

READ MORE: We explore the last taboo of parenting