TV historian Lucy Worsley’s first job as a tour guide at a ‘slightly bonkers’ country house gave her a taste for acting out our past – and she’s never looked back.

After I graduated from Oxford, I landed my first job at a small, privately run and slightly bonkers historic house in Oxfordshire. I phoned up all the historic houses in the phone book and, rather remarkably, Milton Manor said, ‘Come for an interview; maybe we can employ you as a tour guide.’ When I arrived I was surprised to see a boat painted with a huge swastika capsized in the lake. It turned out they had just done one of their famous re-enactments – a Second World War scenario.

In due course I did my own re-enactments, including the time I played Queen Elizabeth II [right, aged 21] at her 1953 coronation. We then re-created a ritual that used to happen at coronation feasts: a masked man, all in black, was my ‘queen’s’ challenger. He comes into the room where the banquet is being held and challenges all comers to fight against the right of the queen to be the queen. In our re-enactment, another knight turned up and said, ‘I’ll fight you’, but naturally my champion won. 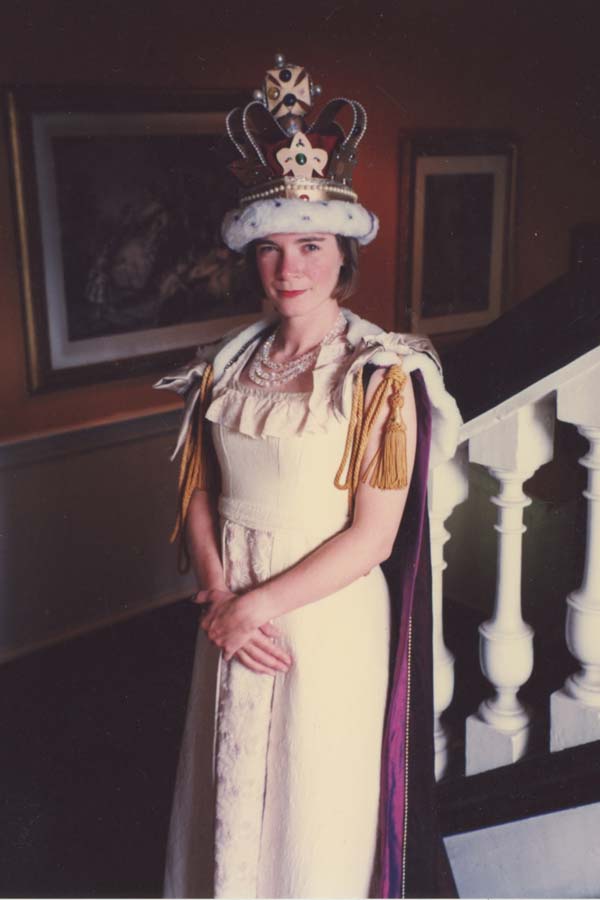 I have always enjoyed dressing up and acting out a part [Lucy has played roles from Tudor maidservants to suffragettes in her BBC programmes]. If you do it right, you can also teach people something. University life prepared me for this kind of pageantry. I overindulged in every aspect – I was so excited to be there, and there was so much I wanted to learn. I studied hard but took part in everything such as the New College student union’s Rag [Raise and Give] parade. I organised an Antony and Cleopatra-themed float, including homemade sphinxes and Tutankhamun masks. My whole family came to my graduation, including my grandma who always gave me confidence about my speech impediment – I can’t say ‘th’ or ‘r’ properly. She would say to me, ‘I think you have a nice voice.

I remember being a little frightened because I didn’t know if I could make a success out of this funny little byway of history. Being a tour guide was my way of getting my foot in the door. When you give a guided tour, if you can see people are looking bored, it’s brilliant feedback. In some ways I’m still a tour guide because what I do on television is take people around historic houses. I like the challenge of inspiring those who don’t yet know they’re going to really like history.

‘I had to reinvent myself’ How Emily Atack went from the...

Elizabeth Hurley on the agony of letting her son grow up...

‘I was live on the radio… and losing my baby’ Myleene...

Princess Diana has been honoured with a blue plaque in London

Leah Weller: ‘Dad’s very hands-on. But there are eight of us!’

‘It’s a really good test of a relationship – being together...

Princess Anne regains her crown as the hardest-working royal

The trailer for She Said, a film about the Harvey Weinstein...