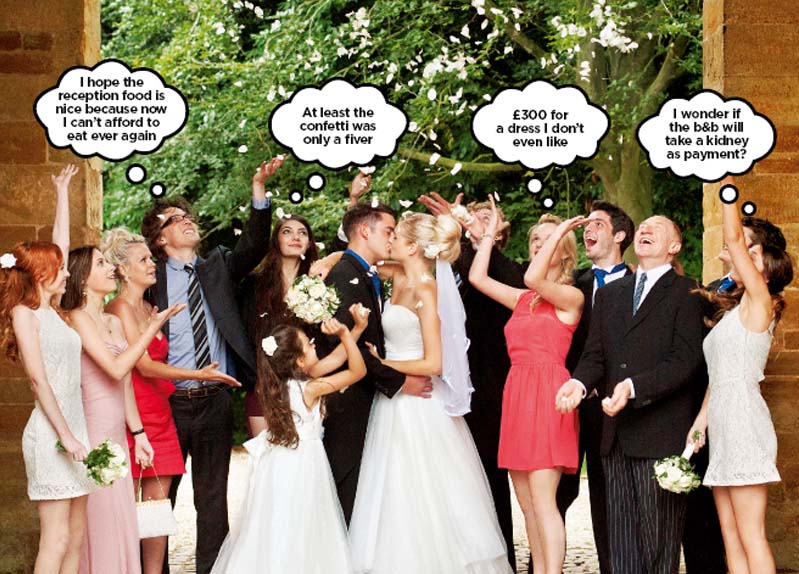 The news that Prince Harry and Meghan, Duchess of Sussex requested charitable donations in lieu of wedding gifts elicited hollow laughter from thousands of people caught up in this year’s other happy ever afters. As weddings have become increasingly lavish, the cost of simply attending one has spiralled out of control to the point where the actual gift can be an afterthought.

Georgina Childs, 30, recently made headlines by revealing that she had to sell her flat and move back in with her parents after spending more than £9,000 attending 14 weddings in four years left her thousands of pounds in debt. ‘It’s easy to say that I should not go,’ she told This Morning, ‘but it’s not that easy to turn down an invite.’

Even removing hen and stag parties from the equation (both of which can be ruinous in themselves), M&S Bank reckons the average cost of being a wedding guest, including accommodation, an outfit, drinks and gifts, now hovers at around £260 per ceremony. However, Jade Beer, editor of Brides magazine and author of The Almost Bride, reckons it’s more like an eye-watering £500 (double that if the wedding is abroad). The average length of a wedding has ballooned: think dinners beforehand and bridal brunches after. ‘We don’t raise eyebrows when another five-day wedding lands on the desk,’ says Beer.

‘The average length of a wedding has ballooned’

Costs – such as where to stay – mount up well before the guest arrives at the wedding. Fabulous if your friend is getting hitched down the road; less so if she’s living out her Disney fantasies. ‘The most expensive weddings tend to be when someone gets married in a small village with one hotel,’ says Genevieve*, 34. ‘I can’t count the number of times I’ve spent £150 plus on a shabby room in an uninteresting hotel just because there’s nothing else nearby.’

In some cases, couples can just be thoughtless. Sasha, 31, was invited to a country wedding in Devon by email. ‘I booked accommodation and agreed to drive other guests down from London. Then the formal invitation arrived about two months beforehand, and I was only invited to “drinks and dancing” in the evening. I was furious; not about being invited to half the wedding, as I understand that’s necessary sometimes, but because it wasn’t made clear in the beginning. Other people were relying on me, so I had no choice but to slog all the way to Devon, watch the world’s most expensive first dance, then drive home the next morning.’

Even the gift list isn’t safe: gone are the days when you could get away with a set of plates. ‘One friend’s list was full of “essential” items such as a £400 silver toast rack,’ says Elle, 35. ‘It was like Four Weddings and a Funeral when Charles (Hugh Grant) goes shopping for a wedding gift for Carrie (Andie MacDowell) and can’t afford anything.’

‘I know a couple who put a £5,000 Bose flatscreen TV on their list, just in case. I looked at it and felt ill,’ says journalist Sophia Money-Coutts, who has put her years writing about smart weddings to good use in her novel The Plus One. ‘Another trend is converting gifts to money. That’s something that wedding list suppliers don’t shout about. Friends think they’re buying you a lovely present, but you’re giving cold hard cash instead.’

As my mum likes to remind me, her wedding in 1979 consisted of a ceremony and a two-hour cocktail party. So why are modern weddings so OTT? ‘It’s basically a competition,’ says Money-Coutts. ‘Weddings have become a sort of spectacle and you’ve got to chuck money at them so they can look good on Instagram.’

It may be one special day for the bride and groom, but guests caught in the domino effect of multiple weddings might be spending their disposable income on little else. It will take Eleanor, 30, months to pay off her credit card bill of several thousand pounds for the six hen parties and weddings she’s going to this year (she has turned down two more), including one in Canada and two in Europe. She is adamant that she would never get herself in serious debt over a wedding as Georgina Childs did. Instead, she diarises payments so she can plan them and has also put two work bonuses towards travel costs. ‘My mum is flabbergasted by how much people are expecting their guests to fork out,’ she says. ‘It is a lot of expense, but I went to a wedding in France last year and I loved it. I made a new group of friends and I’m single…there is an element of knowing that people meet their future partners at weddings.’

So how can guests minimise the impact of shelling out for someone else’s happy day? Jade Beer suggests being realistic about whether you’re an ‘A-list’ or ‘B-list’ guest, spending accordingly and being canny about the things you can’t avoid.

‘Clubbing together with friends for a gift is great as how much you put in is less transparent,’ she says. ‘But choose early when more affordable items are still available on the list. If you’re going to lots of weddings over the summer, buy separates rather than dresses so you can mix and match. Avoid anything that’s too statement-making because when you wear it again it will be more obvious. And remember, just because you have been invited to a wedding doesn’t mean you have to go.’