For years, we’ve been squeezing ourselves into skintight denim – but this year has seen the start of a style revolution. Sarah Mower reveals why a wide leg is your new best friend

There are no two ways about it. Wide legs have triumphed over skinnies in 2022, and that, as far as the foreseeable is concerned, is that. Out with stretchy, low-cut ripped-knee jeans and all their leg-clinging 2010s familiars. In with high-waisted, wide-cut denim and fluid, leg-lengthening tailored trousers. Fait accompli.

This is the sort of fashion shift from one extreme to the other that hits our wardrobes only once in a decade or so. I can say with absolute confidence that this sea change is underway because I’ve witnessed the consensus sweeping through fashion shows in Paris and London. 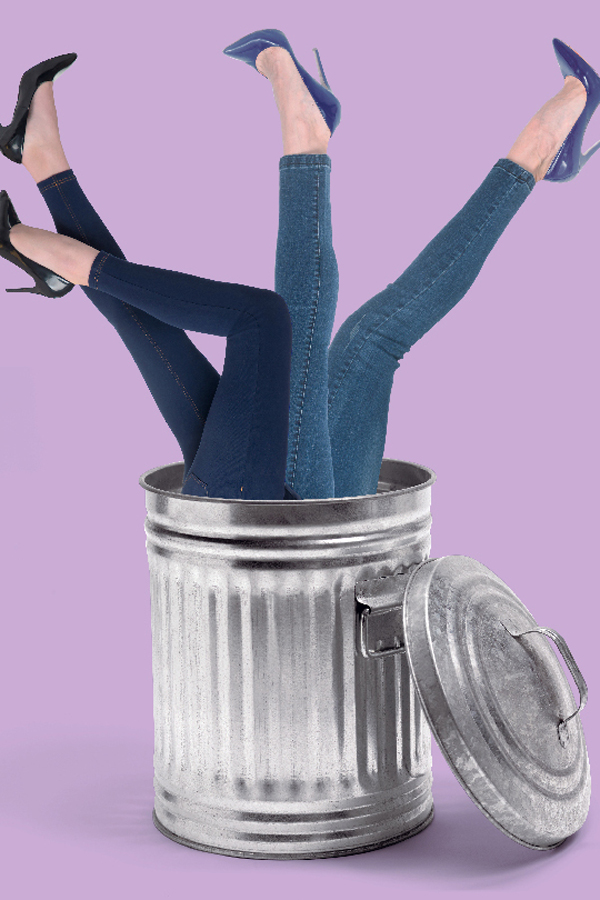 But after two years without catwalks, it’s as if designers had suddenly woken from a long fashion slumber and mysteriously cast a collective vote. From now on, it has been decided, we shall all be practising every way possible to put variations on wide, fluid, slouchy trousers and jeans into our lives.

But who really decided to end skinny jeans? Anyone who is 25 or younger knows that it wasn’t Parisian fashion designers who started this – they’ve just been picking up on the inevitable. The backlash first surfaced in 2021 when teen TikTokkers started ridiculing millennial style – read tight jeans and (for some reason) the offence of side-parted hair. Naturally, this caused an indignant reaction among the 40-something ‘mum’ generation (particularly in LA) who held their sprayed-on skinny jeans as being synonymous with their own rock-chick perma-youth. Some made the fatally embarrassing mistake of TikTokking back, saying how dare they, and how no kid was going tell them to give up their skinnies or to start parting their hair in the middle!

But the writing was already so obviously on the wall. To Gen-Z teenagers, their identification with Billie Eilish in her all-enveloping, all-baggy clothes and their heartfelt love for Harry Styles – and the louche wide trousers he started wearing last year – were all they needed to separate themselves from what their incredibly old and out-of-touch parents were wearing.

What everyone seemed to have forgotten (or weren’t old enough to know) is that in other generations, dramatic shifts in jeans and trouser shapes have always come about in precisely the same way.

It starts with a youth group’s need to provoke the elders by inventing a style of its own. This is highly controversial for a satisfactory year or two, as far as the rebel style leaders are concerned. It makes them feel bold, young, special and bonded, and they will go to ever-further extremes to provoke. Then – quelle horreur! – everyone else starts wearing it. The outsider style undergoes such normalisation that soon no one can quite believe they ever wore anything as absurd and ugly as the thing that came before.

For inspiration on the origins of super-wide-leg fashion, we need to cast our minds back to the 1920s, to how two young countercultural groups were dressing up to annoy the establishment. On the one hand: the male university students who invented the wide-legged Oxford bags trousers. On the other, young women – our great-grandmothers when they were girls – flaunting their beach pyjamas on holiday, and in the case of the fantastic Marlene Dietrich in Berlin, dressing in a man’s tuxedo in defiance of all possible social convention.

You could check out any of the photographs from that time – while treating yourself to a quick rewatch of Brideshead Revisited – copy the clothes, and be perfectly dressed right now.

That the almost-forgotten term Oxford bags is right back in the fashion vocabulary is thanks also to Gen Z – the young Liverpudlian fashion graduate Steven Stokey-Daley, whose university show unveiling his super-wide tailored trousers caused a sensation in early 2020. Harry Styles’s stylist Harry Lambert saw them, asked to borrow the whole collection, then – whoosh – the 23-year-old S S Daley had dressed the biggest fashion influencer on earth.

He created such wildly enormous demand that S S Daley is making them for women now too. But who knew that this new buzzphrase – Oxford bags – is exactly 100 years old next year? It was named in 1923 after the upper-class society of Oxford students who had begun having their trousers tailored wider and wider – so outrageously wide that Punch magazine was soon lampooning all the flapping fabric as indistinguishable from skirts. But the more they were ridiculed, the further the students went – laughing in the faces of disapproving academics who condemned them as frivolous, wasteful and effeminate. And then – what do you know – by the 30s everyone, including the Duke of Windsor, was wearing that cut of trouser on a daily basis.

We can take all the style lessons we need from that. Small top, big bottom. Neat jackets and sweaters hitting somewhere at the waist, volume in the leg. It’s a look to let a wide-leg hem puddle over your trainers, if you wish. On the other hand, high heels or stacked boots, hidden almost invisibly under your trouser hem, add that satisfying, leg-slendering illusion of making you four inches taller.

Essentially, it’s a complete inversion of the skinny-leg, big T-shirt silhouette which ruled the 2010s. We’re over a tipping point. When a trouser and jean silhouette sets in like this, it will be for a good long time.

Just as hippie flares ruled from the late 60s and then became normal wear in Crimplene for all women, men and children through the 70s. Just as punk drainpipes came along one day in 1977 and killed off bellbottoms at a stroke – and then followed a good decade of the stick-legged icon Iggy Pop and all the American headbangers demonstrating the skin-tight makings of what 30 years later would become the appalling thing called ‘meggings’.

Or, in the early 90s, the alliance of Alexander McQueen’s low-riding ‘bumsters’ and hip hop conspired together (despite mainstream public denouncements, at first) to result in the dropped-waist cut of all known jeans from the 90s right through the noughties.

Well, now waists are up again (unless you’re of the abs-flashing, bra-top generation), but whatever else, legs will be wide. Fluid, baggy, denim, corduroy, tailored what-you-will… they’re all available as far as the eye can see. All the way from here to at least 2028, by my reckoning. 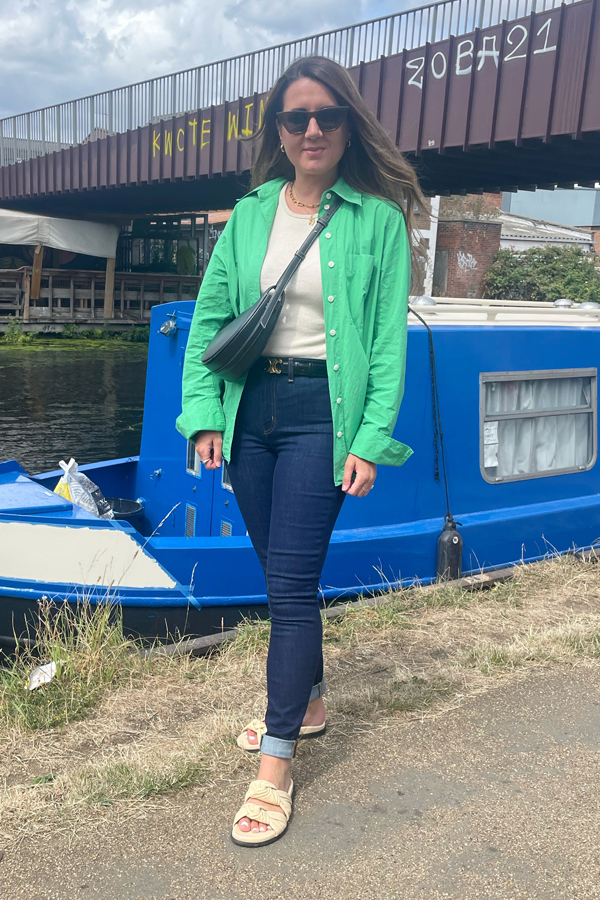 Why do I love my skinny jeans? Because they go with everything: from an oversized shirt to a camisole or basic vest.

The real key for me, though, is the leg-lengthening effect. As someone with shorter legs, a style that sits high on my waist helps to elongate them. Wide-leg pairs make my 5ft 4in frame look shorter, while flares look great with heels but aren’t practical for everyday wear.

It was in 2005, when I was 15, when skinny jeans first appeared on my radar. Back then, Kate Moss and Sienna Miller were seen in nothing but faded skinnies (usually accessorised with a similarly skinny scarf) and Topshop’s iconic drainpipe Baxter pairs were flying off the rails – that year, it sold nearly 20,000 pairs every week.

It was in the changing rooms of Topshop’s Oxford Street store (to which I would make regular pilgrimages from my home in Norfolk) where my mum first taught me the fail-safe getting-into-skinny-jeans tip: lie on the floor and wiggle until they fit!

Because this is when I realised, the tighter the jeans the better – and if getting them on standing up was easily done, they were too big.

Fast-forward to 2022 and, aged 32, I’m still loyal to my skinnies. For fellow devotees, Marks & Spencer’s pairs are a firm favourite thanks to the five leg lengths (extra short, short/petite, regular, long, extra-long) which makes finding the dream fit even easier. If you’re willing to invest in denim, Levi’s, 7 For All Mankind, Frame and L’Agence are the brands to look for.

Yes, TikTok and Gen Z may be telling the world they’ve been cancelled, but I’m a true believer that jeans shapes – like everything in fashion – are unique to each person. Don’t let anyone else dictate your style!

How to do the new denim 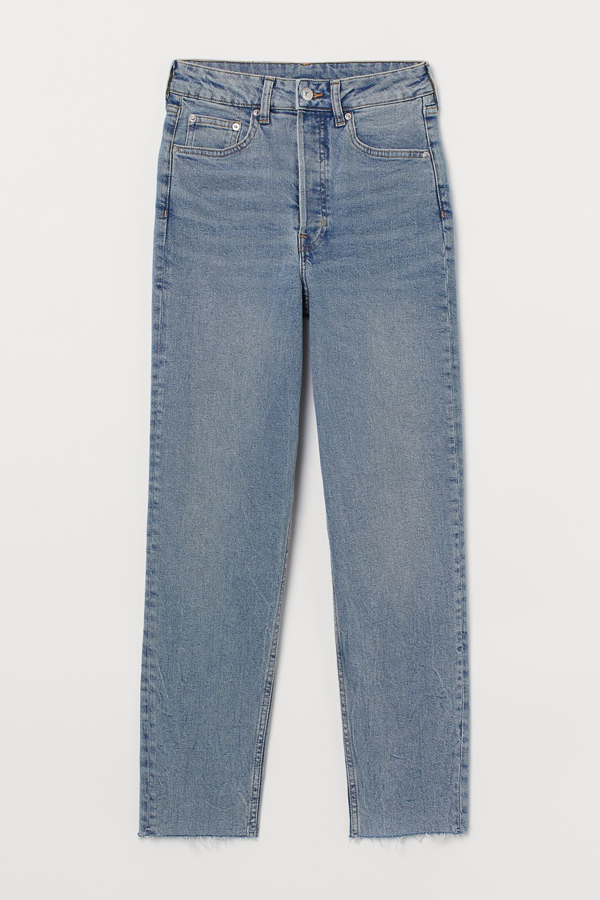 Throwing it back to the 80s with the high-waisted mum style delivers a baggier cut around the bum. These shriek comfort for the curvier among us. £19.99, hm.com 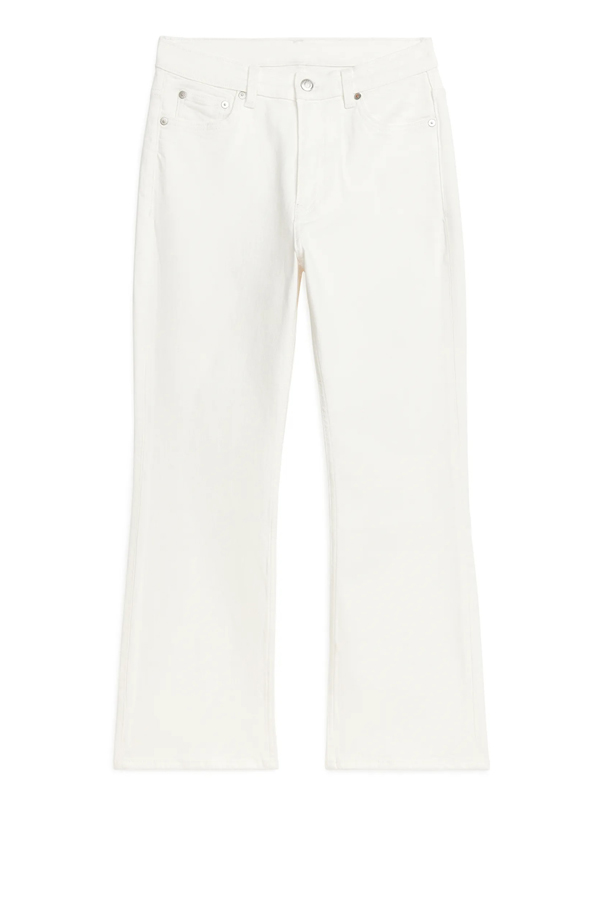 If you’re petite, try a cropped flare. Tailored like a skinny jean through the hips and thigh, it gently flares out at the knee but stops above the ankle, giving the illusion of longer legs. £69, arket.com 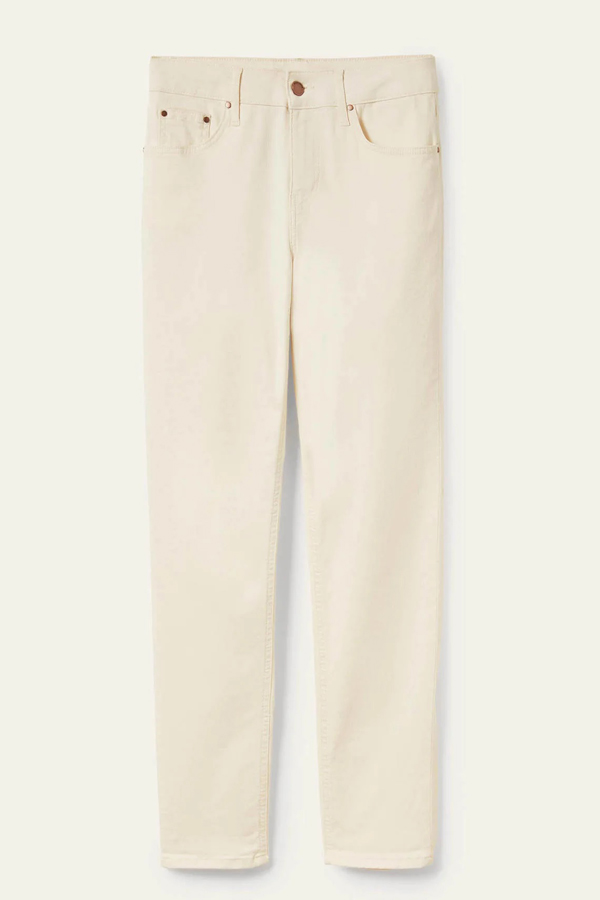 Cut to sit higher on the hips and with a slim straight-leg fit, the girlfriend jean is just that little bit more feminine than the boyfriend, hugging your curves while still boasting a cooler, looser shape. £70, Boden.co.uk 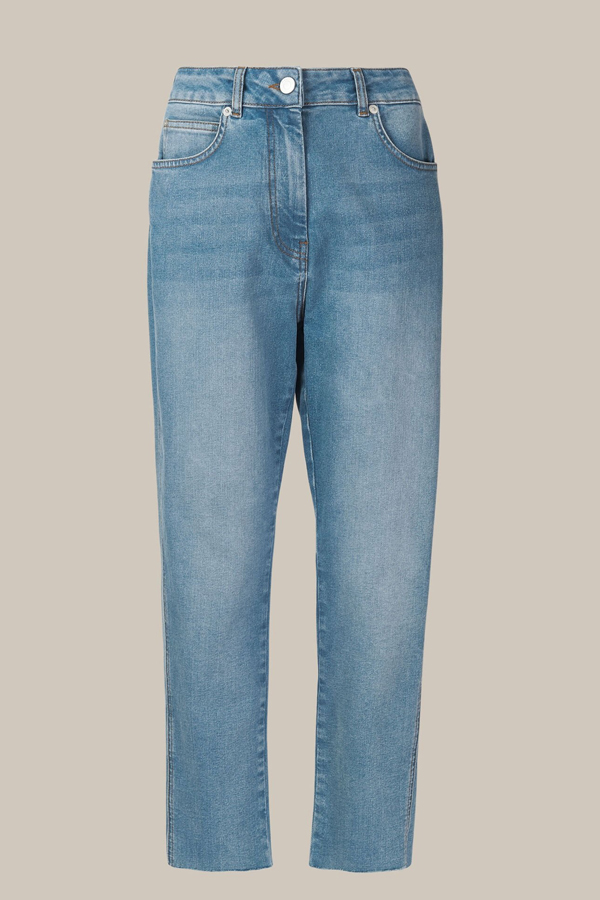 If ditching skinny is painful, try the slim fit. Plenty of give with none of the unforgiving lumps and bumps. Looser on the hips and thighs and gently tapering in on the lower leg. £99, Whistles.com 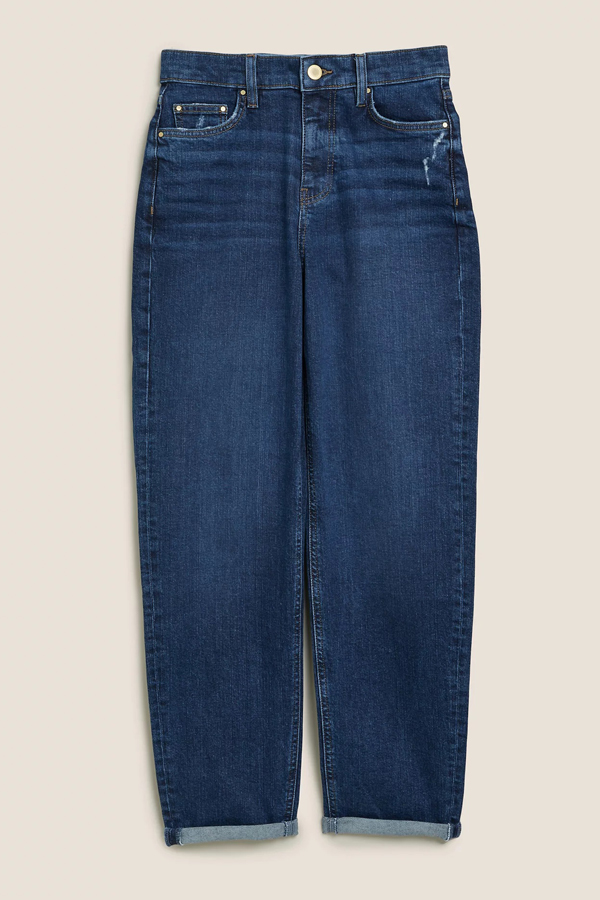 If you’re looking for a slouchy style, the boyfriend is your go-to. It tends to sit lower on the waist to create a baggier silhouette. £39, marksandspencer.com 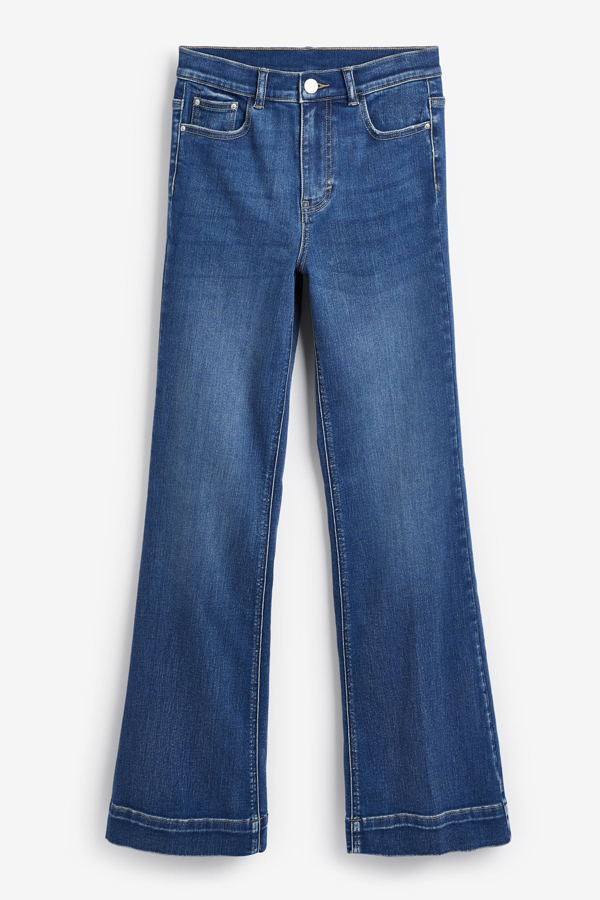 Meet my hero – the wide-leg flare cut. It’s an ultra-flattering and a wearable nod to the forever chic styles of the 70s. These, in the perfect mid-blue hue, fall from the knee and balance out the hips. £42, next.co.uk 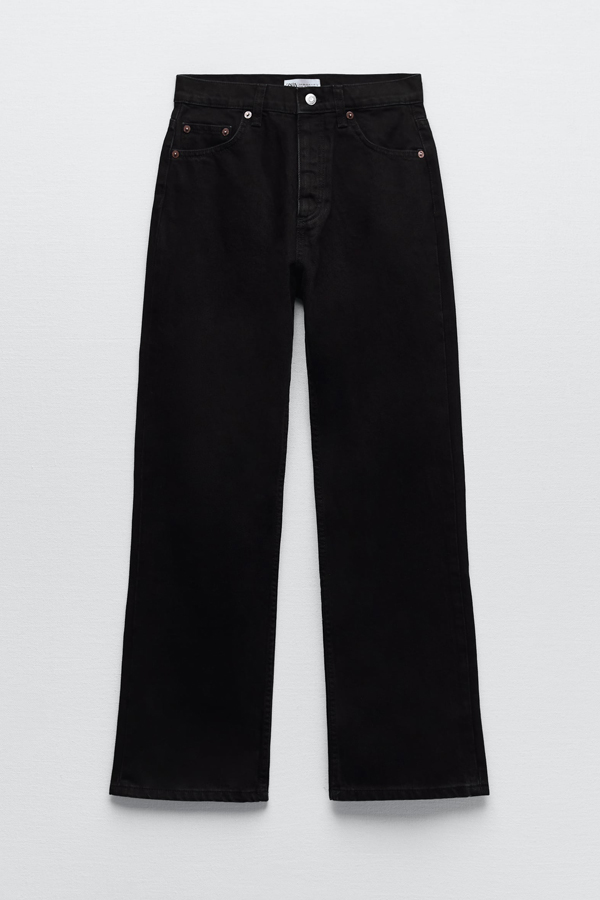 With a straight up-and-down cut through the entire jean, the aptly named straight leg gives that little more breathing room to knees and ankles. £29, Zara.com

By You Fashion Director Shelly Vella

ASOS and DPD have teamed up to collect your unwanted clothes...

Monikh Dale’s sellout Amazon Fashion dress is back in stock and...

This must-have dress has been wishlisted 10,000 times

YES YOU CAN: Wear a one-piece

A former Primark employee has shared the store’s top secrets on...