Cast your minds way back to summer 2018, when the Loupe sandals from Dune flew off shelves in ever size and colour. It seems like every year since then, they’ve come back just in time for summer and we still can’t get enough of them.

The buzz around the Loupe sandal began on social media, where it quickly became a hit with fashion influencers who noticed that it was a dead ringer for Hermes’ much lusted-after Oran sliders.

To absolutely no one’s surprise, stocks of the Loupe promptly sold out, with Dune confirming that the black and tan styles were restocked six times throughout that first season.

‘At the height of summer, one out of every six customer images that Dune London were tagged in on Instagram featured the Loupe sandal,’ a spokesperson told FEMAIL at the time. ‘It was the bestselling style in store and online every week from April until June 2018 and “Loupe” was the most searched for item on the Dune website, every week, from May to July 2018.’

Due to incredibly popular demand, they have returned each year and are of course back for 2022 – in seven different colours. The sandals can be bought online in: brown, black leather, black synthetic, green, neutral synthetic, orange and white leather. 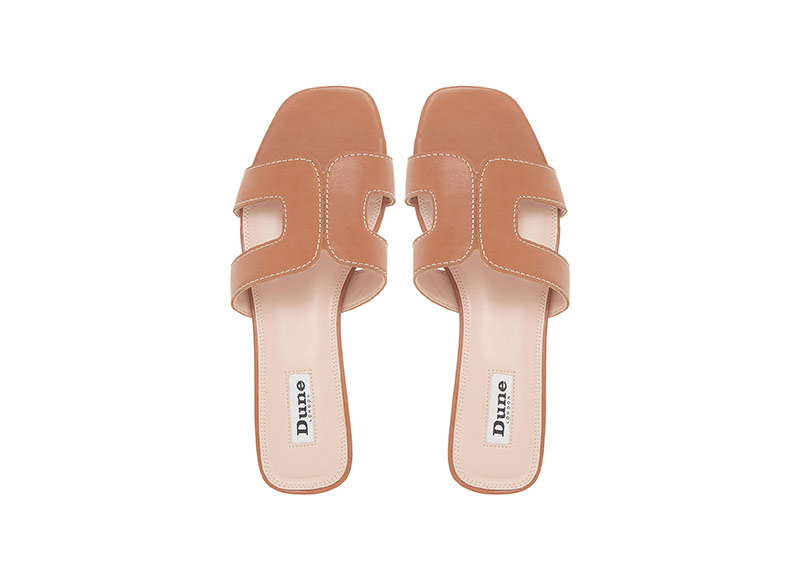 Ninety pounds for a pair of sandals may seem steep, especially with the cost of living in a state of crisis, but compared to others on the market, these are much more affordable than shelling out for the designer version.

With its comfortable height thanks to the low block heel, and chic contrast stitching, the Dune Loupe sandal is one that will see you through this summer and well beyond. There are still plenty of sizes available online, so we suggest you get in there quick before these cult shoes sell out again.