Plagued since childhood with debilitating, stress-related illnesses, I Quit Sugar guru Sarah Wilson discovered the root cause – and turned it to her advantage. 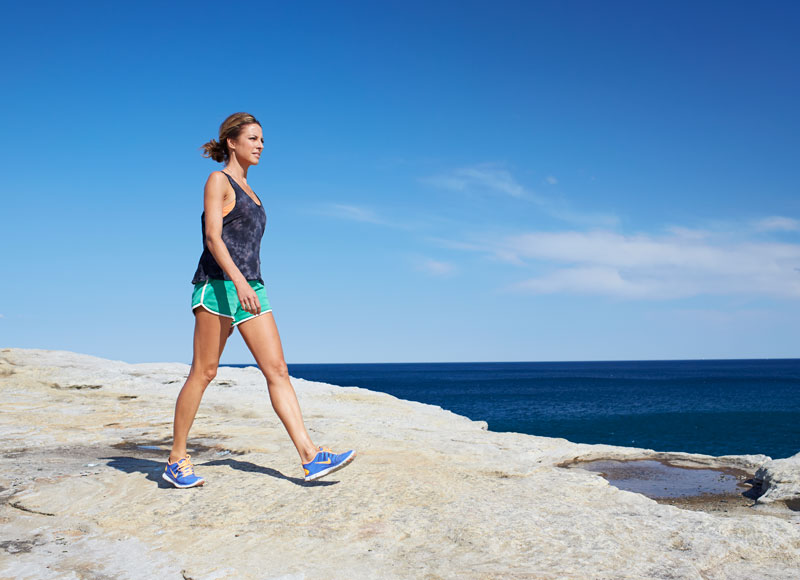 I was diagnosed with anxiety and insomnia aged 12; bulimia in my late teens; obsessive-compulsive disorder, depression, hypomania and bipolar disorder in my early 20s. I’ve seen dozens of psychiatrists and spiritual healers. I was medicated with anti-epileptic, anti-anxiety and anti-psychotic drugs from 17 until I was 28. I’ve waded through neuro-linguistic programming (NLP), cognitive behavioural therapy (CBT), hypnotherapy, Freudian analysis and spiritual coaching. For long, lonely periods I’ve had to step out of the slipstream of life, missing school, dropping out of university (twice), quitting jobs and unable to leave the house for up to a year at a time.

But now I can tell you it was all anxiety. It’s an itching sense that things are not right: a gut-twisting, heart-sinking feeling that winds me in tighter spirals. It makes everything go faster and with so much urgency that soon I’m running downhill faster than my spinning legs can carry me. I’m aware that many doctors may disagree with this notion, and I could be wrong, but I reckon it’s time we had a conversation about anxiety as the root cause of many conditions.

I’ve wrestled with OCD, having to tap things and check things and wash my hands to a count of three. As a child I counted pretty much everything in threes: cracks, drips, turning my pillow to the cool side when I couldn’t sleep. I know when I’m getting worse: my counting goes from sets of threes to sets of fours and fives.  When I was 23, a 92-year-old Russian/Chinese hypnotist introduced me to the idea of mental muscle building. I’d come home early from studying in the US due to illness. It was a perfect storm of manic depression on top of the OCD, insomnia and, although I didn’t know it at the time, an autoimmune disease of the thyroid.

‘Bad habits like insomnia can’t be reversed,’ he said. ‘It’s not how the brain works. You have to build a new and better habit over and over again.’ The new thoughts clump, layer by layer and create a new habit that is stronger than the old one. My old habit was thinking I had to check under the bed for something nebulously dangerous. My new habit was to calmly resist that urge. I visualised lying in bed and being OK with not checking. I created this picture repeatedly in my mind. After a few weeks I put it into practice. I kept breathing, aware of the visceral need to check beneath the bed, but I didn’t. I waited and drifted off to sleep.

Slowly, I’ve worked through years of anxious habits like this, one clumpy neural pathway at a time, strengthening my comfort system. It wasn’t about changing myself, it was about creating ease and gentleness around who I was, which allowed me to make better choices. I became editor of Australian Cosmopolitan at the age of 29 and for most of the first four years I operated just outside my depth. I’d never read the magazine before, never edited or managed staff. I loved the job though; the adrenalin rush sustained me and I learned fast. But then things started to catch up with me. At the time I was also extracting myself from an unhealthy relationship: the kind I’d warn young women about in the magazine. I’d shelved my friends. I was drinking – a bottle of red wine a night – and smoking.

My fix was to go harder and to bang the proverbial square peg into the round hole with even more force because that’s all I knew. I ran ten kilometres each way to work most days. I ran to yoga class. I was sleeping three or four hours a night, going into work early and at the weekend trying to make it all…work. I had heart palpitations, lost a lot of weight and my hair was falling out. I was bone-crushingly tired, but I kept going.

Finally, in late 2008, I quit, flimsily claiming ‘illness’ in my resignation letter and went to see a doctor who did blood tests. He told me it was a miracle I was still vertical. It took every last bit of energy to get to the surgery. All my joints hurt. I was filled with dread when I tried to walk. The doctor said I had Hashimoto’s disease, an autoimmune thyroid condition. When stress hormones flood your body, your thyroid can get damaged. Every cell in your body is affected by thyroid hormones. I had the worst case my doctor had seen.

Further tests revealed that my white blood cell count was barely existent, I was pre-diabetic and would never have children. ‘What would have happened if I’d left it longer?’ I asked. ‘Heart failure,’ he replied. ‘You’re one or two weeks away from it. You need to stop.’ I knew then that I’d been given a wake-up call – and, of course, my anxiety flared again. What causes autoimmune disease? The latest research points squarely at inflammation, microbial imbalance and eating sugar, which is a truly toxic trigger. But I think one of the most consistent root causes is the systematic hammering of oneself into the wrong holes – running too hard at the wrong priorities and compromising oneself. And what fixes it? The medications keep you ticking over but to heal and thrive – both with autoimmune disease and anxiety – the only salve is slowing down and taking care of yourself.

Part of my treatment for Hashimoto’s was to stop exercising. I could walk, but slowly. When you only know two speeds – on and off – the mild mediocrity of walking hurts. But, along with meditating, it was a big part of my healing process for both Hashimoto’s and my anxiety. It still is. Many of us with anxiety don’t look as if we have a problem because outwardly we function well. Our anxiety drives us to make industrious lists and run purposefully from one thing to the next. We are a picture of efficiency and energy. But beneath the veneer we’re being pushed by fear and doubt and a voice that tells us we’re not good enough, we’re wasting time. We may look busy but mostly we’re busy avoiding things. Anxiety is a sign that we need to change our lives.

My anxiety spirals are mostly triggered by uncertainty and the lack of control it entails. Most anxious people are good at doing. I convince myself it achieves something. When I’m anxious I’ll often fan it by drinking more coffee than usual and sending out emails that complicate existing plans. When I worry because someone hasn’t rung me when they said they would, I’m fretting about being lonely in life, but let’s pare this back another layer: I’m really worrying that I’m not able to exist calmly and happily on my own.

Professor David Horgan, a psychiatrist and director of the Australian Suicide Prevention Foundation, says that the brain is a problem-solving machine: it looks for what is wrong and tries to think of ways to fix it. But for anxious folk, the problems are not in the present – they’re projected in the future, so we can’t physically solve them. Rumination feels as though we’re doing something at least. Anything is better than having to sit quietly with ourselves. The doing distracts us from the dread. As the writer Jodi Picoult puts it: ‘Anxiety is like a rocking chair. It gives you something to do, but it doesn’t get you very far.’

Decision-making is a key anxiety trigger, often because we believe that there is a perfect decision out there. Clutching at something that doesn’t exist is enough to send anyone into a panic. I think anxiety is a disconnection that leaves us fretting and needing to compensate with irrational, painful behaviours, whether it be OCD, phobias or panic attacks. It’s this sense of missing something that leaves us feeling lonely, incomplete and fluttery. Reading Kay Redfield Jamison’s An Unquiet Mind, about her struggles with bipolar disorder, a passage stood out for me: ‘The Chinese believe that before you can conquer a beast you first must make it beautiful.’ I believe that just understanding the purpose of the anxious struggle helps to make it beautiful. If I didn’t know what it was like to go down deep and dark, I wouldn’t know how to take creative risks. Purposeful, creative, bold, rich, deep things are always beautiful.

Jamison thinks that acceptance is key. At the time I was struggling with my own bipolar diagnosis, but her writing told me it was OK. The storms, bleakness and madness count for something. The restlessness will lead to something. I have found that these ‘individual moments’ – changing dinner venues with friends, over-researching everything or, when somebody loses something, feeling I must find it for them – can either make me feel dreadfully alone and unhinged or unique and a little bit special, if I choose to see it that way. The anti-sugar crusade that now sees me travel the world for five months of the year, publishing books and running a business with 25 staff, began not long after my mid-30s meltdown. For 18 months I supported myself by writing a magazine column. One week in 2011 I was short of a subject and so I decided to give up sugar. I’d been told by several doctors and naturopaths of the link between sugar and inflammatory diseases such as Hashimoto’s. I convinced myself I didn’t have a problem because I wasn’t eating refined sugar – I’d have ‘healthy’ honey in my chai tea – but I was still consuming the equivalent of 30 teaspoons a day. It doesn’t surprise me that sugar is linked to anxiety. I tried a no-sugar diet for two weeks.

I was calmer and my skin glowed. So I kept going. Draconian diets don’t work. We’re better at doing something than not doing something. So I focus on all the abundant food I can eat. A sugary lapse is not a problem – in fact, it’s a good thing: the resulting frazzled, foggy feeling reinforces why I quit in the first place.

I think that every major step forward in my career has been driven by my anxiety. It’s my internal traffic light system that says ‘go’ and ‘stop’. The fact that I have lost everything to my anxiety and related illnesses at several stages in my life, means I have little attachment to material outcomes. I don’t care about money – frankly, having it makes me anxious. So when I’ve come to big forks in my career I’ve been able to take the more true path, untroubled by such concerns. I’ve been able to rebuild and redefine my life several times because I’ve had nothing to lose. We can view anxiety as something to accept and live with but we can make the beast more beautiful than that. I prefer to say now that anxiety is my superpower.

This is an edited extract from First, We Make the Beast Beautiful by Sarah Wilson, to be published on Thursday by Bantam Press, price £16.99*