A great handbag is an investment that can make or break an outfit – a style rule that the royal family know all too well. The Queen is loyal to luxe handbag line Launer, while the late Princess Diana loved her chain-handled Ferragamo Shoulder Bag so much that it was later named the Lady D in her honour.

However, when it comes to contemporary accessories, there’s one brand that various members of the family return to time and time again: DeMellier.

Eagle-eyed royal fans will have spotted that the cross-body Mini Venice bag chosen by Meghan for her royal visit to Cardiff in January 2018 was also seen on the arm of Camilla earlier this year, when she visited Jewish Care’s Brenner Centre in East London.

The duo aren’t not the only fans of DeMellier in the family: Pippa Middleton has carried several of its bags in the past, including The Milan and The Luxembourg, and Princess Beatrice has been snapped with a plum leather version of The Dubai on multiple occasions.

And that’s all before you even begin to note the non-royal famous faces that have a DeMellier in their collections: Isla Fisher, Emily Blunt, January Jones, Kim Sears, Eleanor Tomlinson, the list goes on.

So, why have DeMellier bags caused such a stir amongst A-listers and royals alike? The label’s founder, Mireia Llusia-Lindh, says that she designed her collection to be carried without compromise, aiming for them to be ‘of the highest quality but also functional and attainable, as well as socially conscious’.

But while the bags themselves are undeniably beautiful, there’s also another reason why they’ve proved so popular: for every bag purchased, DeMellier funds a set of lifesaving vaccines and treatments aimed to save the life of a child in need through its permanent charity initiative, A Bag, A Life. Not only do they look good, they do good too. 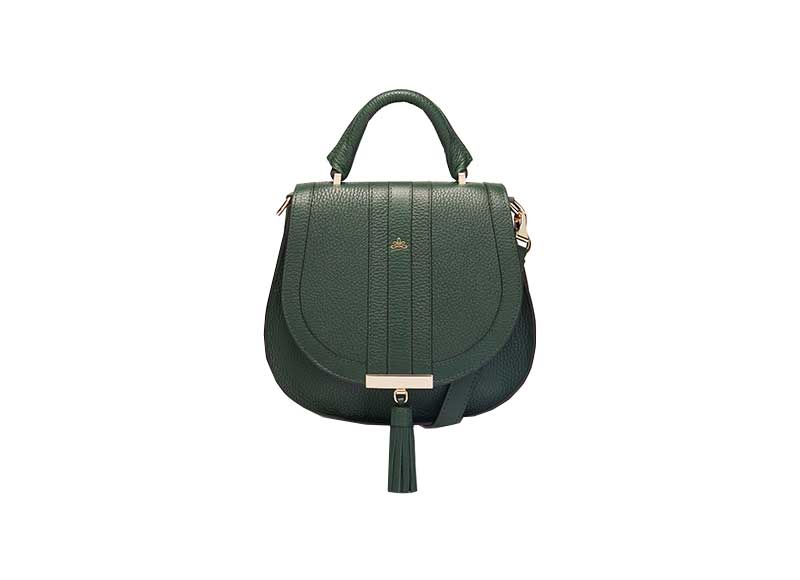 Meghan in particular is known for making fashion choices that support charitable causes, although Mireia says that her choice in the Welsh capital was ‘completely organic: we didn’t gift and she didn’t approach us.’

‘The British Royal family does the most amazing work to support emerging British brands are the best possible ambassadors given the quality of their work and their global reach,’ the designer told the Evening Standard.

‘We have been very fortunate that different members have chosen to wear some of our bags, helping raise the awareness of our brand in different countries. Something for which we will always be grateful.’