From their glossy gay wedding to candid selfies, documenting their relationship online has made Rose Ellen Dix and Rosie Spaughton social media stars. But oversharing does have its disadvantages, as they reveal here.

Rose, 30, and Rosie, 28, are not your average married couple. They are the LGBT+ poster girls for the social media generation, posting candid, comical YouTube videos about their life together, revealing all their secrets (they will even livestream the birth if they have a baby). After winning over their families and overcoming their own issues, they are making a mission of normalising same-sex relationships. More than 1.2 million people tune into their videos while 859,000 combined Instagram followers lap up the pictures of their lives. Their big, white, stately-home wedding, four years after they got together, has been watched 1.6 million times at the last count. In this exclusive extract from their first book, they share more about their life and love with characteristic honesty…

People ask how Rose and I manage to live together, work together and still be so in love. I find this baffling. We’re together 24/7 and never run out of things to talk about. We still make each other laugh every day, I still catch myself being taken aback by how beautiful she is and we still manage to surprise each other.

However, our relationship hasn’t always been such smooth sailing. We met, we re-met, we argued, played games, tested, punished and pushed each other away. Rose’s parents were wary of me for a long time because of this. I never imagined we would end up married or that our jobs would be sharing our lives on the internet. 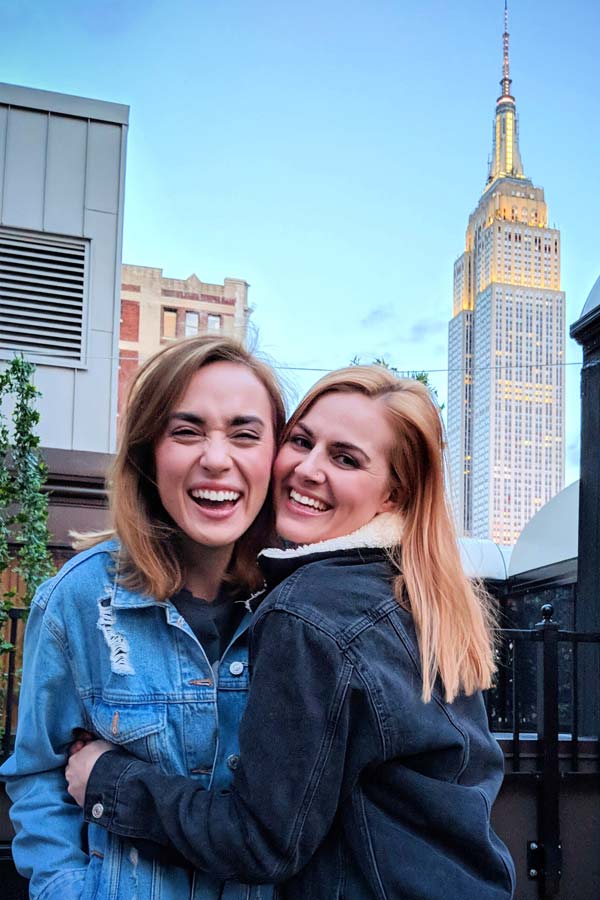 I had previously dabbled with girls but I’d never had a proper girlfriend. I wasn’t as experienced as Rose. But I needn’t have worried. Our early dates were amazing. We share the same sense of humour and I love the fact that being with Rose turns mundane activities such as food shopping into the most fun, exciting time. We were both at university – me in my second year and Rose in her third – and we spent as much time together as possible.

I was juggling my university course, part-time work and confronting my own sexuality. Although I had known from a young age that I was bisexual and was comfortable with that, some people now assumed I had ‘picked a side’ and ‘become a lesbian’. I worried that would be my reputation for ever and no boy would ever date me again. Rose could see I had put up emotional barriers to keep myself from getting hurt and, in an attempt to protect herself, she decided to play it cool too. To make herself appear less interested, and perhaps to gauge my reaction, she suggested we see other people. I readily agreed, much to her secret dismay.

When I saw Rosie dressed as the Queen of Hearts at a Halloween party I felt starstruck. She was surrounded by boys. She left a trail of heartbreak everywhere she went and, masochistically, I wanted to be next in line. When Rosie and I were finally introduced, never had anyone looked at me so piercingly, to the point where I couldn’t hear anybody else in the room. She kissed my cheek and then she was gone. I was so in lust with this girl I had no idea how to handle it.

Not being honest about how I felt led to ten months of game-playing and lying. I was addicted to the pain. However, I was also beginning to question my methods. I had assumed making myself available for others would immediately make me more desirable to Rosie. The truth was I had few other options while Rosie had dozens. I’m not proud of what happened next. One evening I was alone in Rosie’s flat and there was her diary. I read it. I can still feel the hot flush of shame and adrenaline. I read it from start to finish and I wasn’t mentioned once. I read that she’d slept with a guy and she described it as the best sex she’d ever had. I’ll never forget how much my heart hurt and how much I wanted to hurt her.

The turning point involved Rosie texting to ask for my help getting her to hospital. She was really poorly. I couldn’t ignore her, even though my parents had advised me to keep away. I stayed with her throughout her time in hospital and she says that was when she fell in love with me. I had fallen in love with her months before.

ROSIE: ‘The thing about homophobia…’

When I came out of hospital we began a serious monogamous relationship. Rose is only two years older than me, but her wisdom is beyond her years. Seeing her working towards her goal of a first-class honours degree inspired me to want more too. I loved her passion and the way she made me feel as if I had everything I needed within myself.

We dealt with some homophobic experiences together but we talked it through and I began to feel more confident about being ‘out’. When we were stopped in the street by someone asking if we were lesbians because we were holding hands, we were both strong enough to be able to laugh it off.

I know I had a positive influence on Rose too. She admired my independence and I encouraged her to move out of her parents’ house once she left university. She ended up moving five houses down from my flat in Worcester. We spent almost every night together. We knew we would end up moving in together but I’m glad we made sure Rose got to experience living on her own first.

ROSE: ‘…and those tiresome questions’

Never did I imagine that the dynamic of our explosive early days would lead to a partnership that works so well on so many different levels. Without wanting to sound like a relationship snob, I think the key for us has been communication: I communicate by throwing things and Rosie communicates by avoiding them. It works. We’re so close now that we can even tell what the other is thinking. Having patience is another factor. I wait patiently until she has finished talking and it’s my turn to speak. (I’m actually still waiting for that…).

Perhaps this is why so many assume we’re related rather than a couple. Our chemistry confuses people, and watching as they try to work out the dynamic can be both entertaining and tiresome. Every Uber driver questions why they’re taking us back to the same house. The interrogation is so uncomfortable that it often makes me choose walking for 40 minutes over the convenience of being driven. If we were two men, find it hard to believe we’d be asked, ‘Are you brothers or just friends?’ What does it matter?

I often feel pressurised to give a detailed account of how we met, what we do for a living and why we live and work at the same address. There have been countless occasions when I’ve felt threatened and, sickeningly, have felt forced to give false answers for my own safety.

ROSIE: ‘When life takes a U-turn’

It sounds offensive now when I say I never, ever imagined I would end up marrying a woman. What I mean is I never thought it was even an option. I knew my attraction to women was strong but I believed that I would settle down with a man eventually. But what life has taught me is it doesn’t always care for your plans.

When Rose and I go out for dinner we’re fascinated by the number of couples who don’t talk to each other. Partly because I could have a conversation with a shower curtain, but also because we always have so much to say to each other. We go from discussing our deep, psychological inner workings to writing low-grade kitchen hip-hop. We have days when we sit and work furiously and days when we dress up to impress each other.

ROSE: ‘Why marriage is important’

Rosie and I didn’t consider marriage in our future until I fell down the station steps running to catch a train for an event we were appearing at in 2014. I was out cold and Rosie was screaming for help. She wasn’t allowed to accompany me in the ambulance because she wasn’t a family member or next of kin. She bravely had to call my parents, who were still wary of her, to break the news, then had to stand back and let other loved ones take her place. As well as being wary of our arguments, I think my mum was concerned I would be treated differently as a lesbian. But I learned that what might seem like discomfort or homophobia is just parental love.

Our wedding was beautiful, full of love and family acceptance. Mum was incredibly proud
and took joy in helping to organise it. Rosie and I had come a long way from our early days of mistrust, mess and mistakes. I think, subconsciously, we always knew that this was where we would end up.