Over 4000 chocolate lovers have signed a petition to bring back retro chocolate treat Cadbury’s Snow Flake. Phased out ten years ago, the Snow Flake was essentially a white chocolate version of another Cadbury classic, the Twirl – with flaky white chocolate coated with a smooth layer of milk chocolate. Yum. 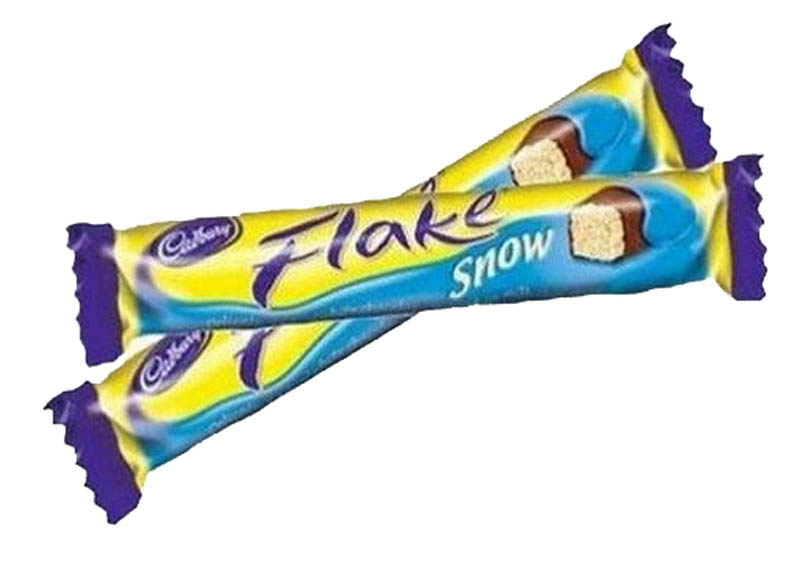 Starting the campaign on change.org, John Malogony wrote: ‘In 2008 Cadbury broke hearts by discontinuing the Snow Flake (or Flake Snow). The bizarre decision still baffles people to this day and it needs to be rectified’.

The Snow Flake was launched in August 2000 and gained fame when Anthea Turner was pictured chomping on the chocolate bar at her wedding to Grant Bovey, as part of a lucrative sponsorship deal. Very classy indeed.

If the campaign to resurrect the Snow Flake has you feeling all nostalgic (not to mention hungry), how many of these now defunct chocolate bars do you remember?

For four short but sweet years we could enjoy the perfect combination of delicate rippled wafer, caramel cream and cocoa cream, all cocooned in a think layer of milk chocolate. Hailed as a ‘lighter’ version of the traditional Mars Bar (although with 14g of fat per bar it actually had 4g more fat than the original), it was the connoisseur’s choice: crisp, dainty, delicious. There have been numerous attempts by consumer to get Mars to do the right think and reinstate the Mars Delight, but as yet none have been successful.

A bar of solid milk chocolate laced with a chewy, crunchy concoction of peanuts, raisins, crispy puffed rice and fudge fragments, it’s closest ‘sibling’ in the chocolate world would be a Lion bar. The Fuse was cruelly taken from our shelves in 2006, but in 2015 Cadbury ran a competition where fans could vote to bring back their favourite chocolate bar. While Fuse won, Cadbury can’t have produced many as it’s virtually impossible to get your hands on one now, with people selling packs for £30 on eBay!

Thankfully we still have the original Wispa and the caramel-boosted Wispa Gold to enjoy. But many a flavour variation has bitten the dust. Alongside the Wispa Mint – which at one time rivalled the Mint Aero – the Wispa Bite (with a biscuit layer) has fallen victim to poor sales, along with the brilliantly name Wispaccino, which featured a coffee-flavoured caramel.  Really, we only have ourselves to blame.

Fox took the aerated chocolate bar ‘genre’ up a level with the Echo: fingers of bubbly white chocolate upon bubbly milk chocolate, upon a chocolate biscuit base (which made it perfect for dipping into a cup of tea), all encased in a fine layer of milk chocolate. Mint and orange flavours were available but purists maintain the simple white chocolate version was the best. Originally launched in 1999 it got a makeover in 2008, with sophisticated matte packaging – but it wasn’t enough to keep it on the shelves.

A blend of marbled milk and white chocolate, it was the  hazelnut praline centre that made this bar really special. Sadly the Cadbury Marble went the same way as the Cadbury Dream (creamy white chocolate that was made with real coca butter unlike Nestle’s rival Milkybar). The lesson here? Stockpile your favourite chocolate bars before the cruel gods of the confectionery world decide to cease production.

Essentially Pringles made of chocolate, these stacks of thin curves spawned many spin-offs: orange, mint, hazelnut, caramel crunch. The possibilities were endless. While Cadbury abandoned their Snaps – and brought out Cadbury Thins instead (think a wafer-sliced chocolate digestive), other retailers have created their own version of Snaps: try ALDI’s ‘Belgian Chocolate Waves’ for a fairly convincing substitute.

Bendicks ended production of their Mingles in 2011, nine years after launching. The lurid green box of treats – also available in a tin – featured five varieties of chocolate ‘with a hint of mint’, of which the best had to be the brown-wrappered ones (dark chocolate with a fondant mint centre) and the blues (marbled milk and white chocolate with dark mint truffle centre). Lovers of mint chocolate are still mourning their loss – Matchmakers just aren’t the same.

Take some of Mars’ greatest hits – Twix, M&Ms, Bounty – then reinvent them as a flat, rectangular biscuit and you have the Mars Bisc range. Sold in multi-packs – although we don’t know anyone who made a box last longer than a day – it was axed in 2005, just two years after a £15 million launch and advertising campaign in the UK.