Ben Fogle discovered that sometimes summer holidays are memorable for all the (hilariously) wrong reasons. Here, he and five other writers relive the mishaps and mayhem from their break in the sun.

‘This raft nearly sank my marriage’

Shortly after Marina and I married in 2006, I took responsibility for organising our first summer holiday together as man and wife. I decided that she would love to go on a rafting holiday in Sweden. Of course, no Fogle holiday is complete without a dog, so we took two – my Inca and Marina’s Maggi.

We drove for two days to mid Sweden where we were presented with a ton of timber to construct our raft. For 12 hours we heaved 70kg logs into the river and lashed them together with rope, then launched our rickety little raft and set off down the river for a ten-day ‘float’.

Unfortunately, Sweden decided to cancel summer that year. The temperature plunged to single figures. The rain thundered down. We struggled to find an easy way of stopping our raft which was following the river currents – the only solution was to leap into the freezing water and swim with a rope to a strong tree to use it as a brake. And we soon discovered that we also had to do this every time that we needed to let the dogs go for a pee. We slept and ate on our raft, occasionally getting stuck in eddies that were almost impossible to escape and forced us both to paddle furiously.

A few days into our adventure we discovered that my rope-tying skills weren’t up to standard. They began to unravel – as did the raft. Soon we were up to our ankles in freezing river water, sheltering under the tiny platform with the dogs.

Cold, tired and irritable, Marina eventually lost it and we stopped the raft. Dressed in a bikini under her raincoat, she marched up to a remote Swedish farmhouse, knocked on the door and begged for shelter. The kind farmer let us sleep in his barn for two days while a record amount of rain fell. We felt like Mary and Joseph sleeping in the hay. He fed us and we eventually made the decision to ‘abandon’ the raft, leaving a poor Swede to navigate our sorry float to the end of the river where it was disassembled.

I haven’t been allowed to organise a summer holiday since. 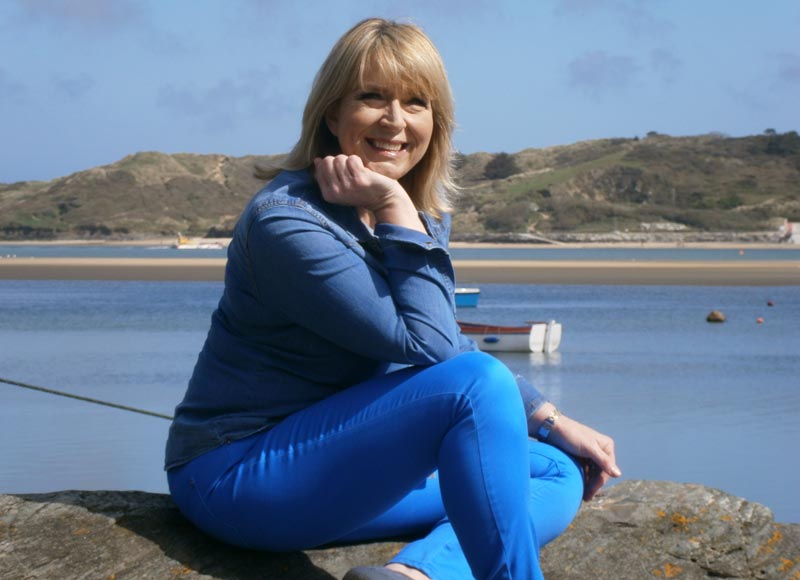 When the children were younger, our summer holiday in Cornwall would always kick off with packing the car that fitted all six of us, plus pushchairs, beach tents, teddies, games, Nintendos and enough fleeces, wellies and snacks to survive a zombie apocalypse.

My husband Phil and I had it down to a tee… until pets came into our lives. The first was Snoopy the hamster – a dear little thing. And my daughter, to whom Snoopy belonged, really felt that hamsters need holidays too. So, with some compromise over a case of board games, Snoopy’s cage was accommodated.

The following year we had a couple more pets: two chickens. We couldn’t leave them, could we? Chickens need holidays too. My suitcase was downgraded to a carrier bag and the chickens, happy in a dark, airy cardboard box, were tucked next to Snoopy. Phil would be up at 5am to chivvy us with cups of tea and we’d be on the road by 5.15. Six humans, two chickens and one hamster.

At Bristol the chickens began to chat to each other. How charming. They chatted more loudly. We turned the radio up. There was serious squawking then silence. We stopped at the next services to open their box. Two eggs lay warm and perfect. Bless their feathery faces. They travelled with us for another three holidays and, as we got to Bristol, it was always the same. Snoopy ended her days in Cornwall, where she is buried, and we can never go past Bristol without remembering our dear hens. PS Now we take three cats and a dog.

Fern’s latest novel, The Newcomer, is out in paperback, price £7.99

‘I’d missed the code for “come over for sex”’ 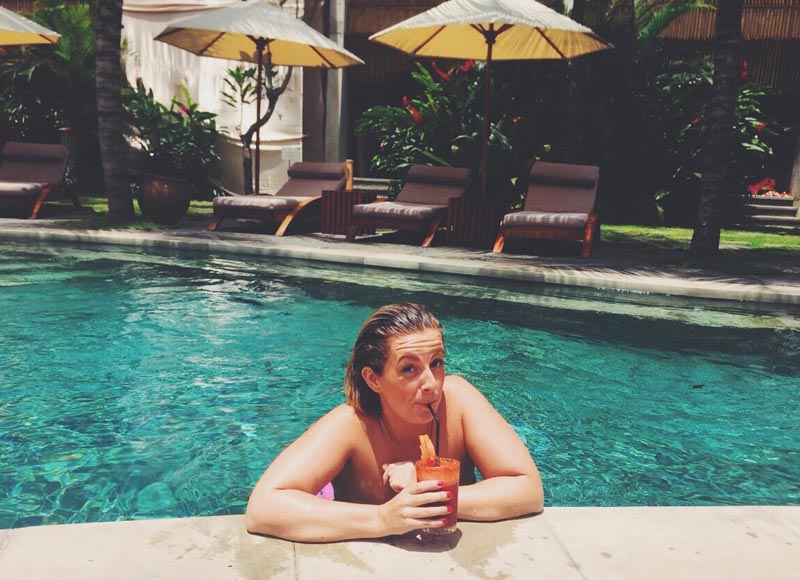 It wasn’t until I visited Bali on a writing holiday that I realised it had incredible sexual energy, though it is known for its ley lines (hippie speak for the spiritual power of a place).

One evening I met a South African couple at dinner who asked me to come over the next day. I was really naive and thought they were just being friendly to a solo traveller – but when I arrived at their rented house in the rice fields and they told me to ‘slip into my bikini’, it dawned on me that I’d missed the code for ‘come over for sex’.

They texted me a few times after that. I never went back but I hope they found somebody else to enjoy the evening with.

Laura’s novel Our Stop is out as an ebook and in paperback from 8 August, price £7.99 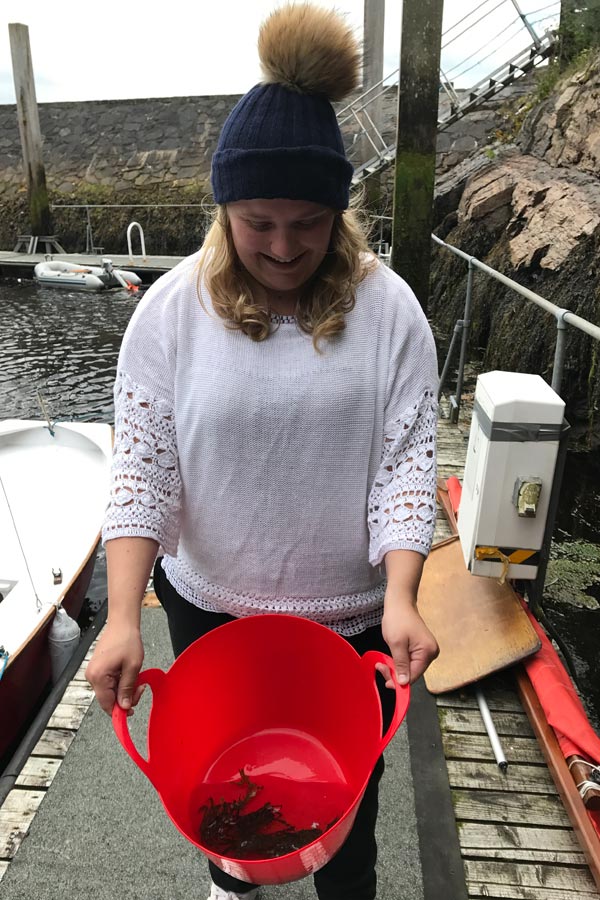 By Bella Younger, writer and comedian

Instagrammability might be the number one consideration for millennials when deciding where to go on holiday. But for me, it was a trip with #nofilter that became a treasure trove of memories.

Last year I joined my family at a remote, run-down holiday village in Scotland. It seemed a great idea. A free holiday. A chance to catch up with my family. Sure, my friends were with their other halves in Puglia, but Dad said there was a pool. How bad could it be? Bad, as it happens. There was a rusted tennis court, empty stables and a rapidly greening pool. Plus I’m 30 and single so my parents told me that I’d be sharing a bedroom with my two teenage siblings. They called it a family room. It was a dorm.

Within minutes my mum and sister had a fight because my sister thought my mum had tried to kiss her on the lips. I laughed and was sent to my room. We stormed to the pier in a huff, but no solace could be found.

The only place with internet or phone reception was an on-site office. This meant no bitching to friends, no scathing tweets and no Instagram. My parents insisted on us communicating via walkie-talkie. Nothing ruins a moment like your dad radioing you to say, ‘Come in, darling. Dinner is ready. Copy that. Over.’

We may have been living on top of each other but when we weren’t fighting we were laughing like drains. I went crabbing for the first time in years and saw an otter.

Going back to basics made me appreciate my family’s uniqueness, and my stories are all the better for it. It was as far from my friends’ scenic trips as possible, but it was ideal because it was real.

‘Guns were fired – and the odd grenade’ 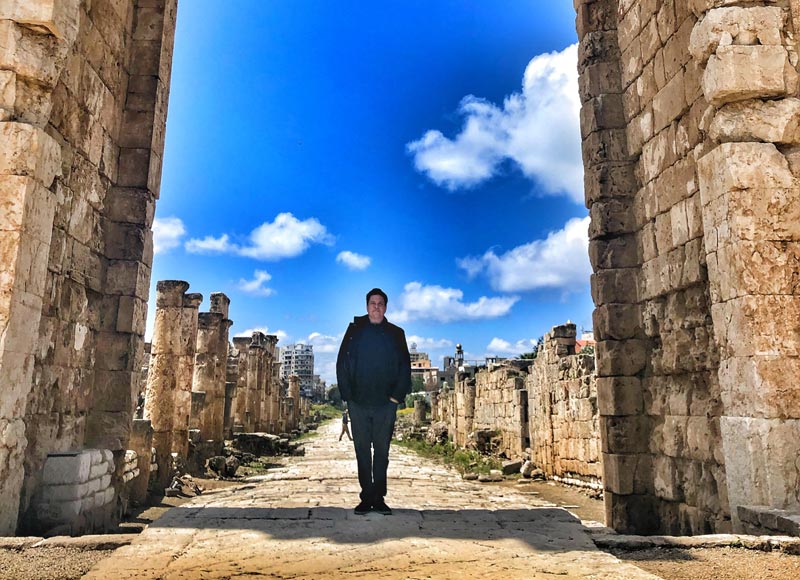 I recently went with two friends to Lebanon, where I grew up, to walk the length of the country as part of an extended midlife crisis.

Lebanon is the most stunning country I have ever been to. It has everything: beaches, rivers, skiing and extraordinary ruins – old and new. One of these sites is Baalbek, in the Bekaa Valley. It is staggeringly beautiful and, as a bonus, we had the place to ourselves as the country is still not most people’s idea of a holiday destination.

As we surveyed our domain, three French tourists entered the complex and I found myself being unduly annoyed by their presence. Unwilling to share, we exited and sat in a café just outside to enjoy a post-culture beer.

The night before had been the election and results were starting to come in. Baalbek is a Hezbollah stronghold and they had done particularly well. The Lebanese have a habit of firing guns when celebrating – and soon the air was thick with machine gun fire. Even the occasional grenade was fired off in spontaneous celebration. We knew the reason for this cacophony but nobody had told the French tourists. As we sipped our beers, they came racing out of the ruins towards their vehicle in a blind panic.

The Hezbollah Hiking Club: A Short Walk Across Lebanon by Dom Joly is out in hardback, price £20, and as an audio book and ebook.

‘I started a feminist Arab Spring’

I went to Marrakech for a girls’ holiday with my best friend. The hotel was super swish with a glamorous pool scene where we noticed two handsome chaps and thought, ‘Oh hello.’

Catching of eyes and shy smiles followed (as well as much holding in of the stomach). Eventually they came over and we got chatting, even though there was a bit of a language barrier. We were impressed with our flirting and thought we were well in there.

The next day, the men said they wanted to suggest something ‘special’ for us ‘special ladies’. We popped with excitement – until they told us that they worked for a cosmetics house and recommended we try out their anti-cellulite cream. The cheek. Literally. Not put off, one night we met two dashing French guys and brought them back to our hotel – for one drink only! – but all hell broke loose when the (male) hotel management wouldn’t allow single women to bring men back as their guests (though it was fine for men to bring back as many women as they liked).

The raging Glaswegian in me was released. Before we knew it, women gathered round us in support calling out the sexist hypocrisy. It was like a feminist Arab Spring. In the end we won – in that we were allowed to have one Coke by the swimming pool, chaperoned by a security man. As we turned around, victorious, to tell our French fancy-men the good news, they were nowhere to be seen.