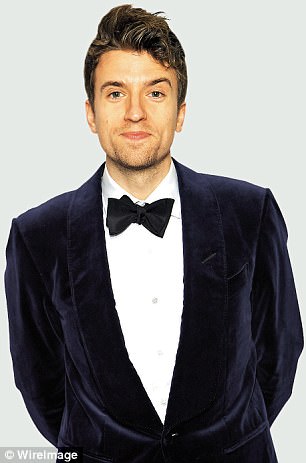 Guilty pleasure? Mowing the lawn at my parents’ house in Bishop’s Stortford, Hertfordshire. It’s not exactly guilty, but it is a pleasure that I find relaxing.

Where is home? A flat with a roof terrace which my sister found for me in the City of London. The area reminds me of the opening credits of BBC One’s The Apprentice.

Career plan B? Ideally a cricketer – but if I wasn’t good enough, then a brilliant groundsman.

Who would play you in a movie of your life? Bill Murray, my favourite actor.

Biggest bugbear? People who are early. I’d rather they arrived ten minutes late than ten minutes too soon.

As a child you wanted to be… On the radio or acting in a comedy – Ricky Gervais did both when I was growing up and he’s who I wanted to be.

Secret to a happy relationship? Being a team of two against the world and making each other laugh.

Your best quality? I worry about the people close to me and check up on them all the time.

And your worst? I’m bad at prioritising life’s admin – I’m always getting into trouble over unpaid bills.

Last meal on earth? A pizza, preferably at a restaurant in the centre of Florence in Italy.

Cat or dog? I’m 100 per cent a dog person. Cats tend to be fairly solitary, whereas a relationship with a dog feels more balanced – they need you and you need them.

Starstruck moment? Michael Palin turning up as a surprise guest on my show a couple of years ago. He is my number-one inspiration and I couldn’t speak for about two minutes, then blurted out everything I wanted to say in about ten seconds.

Big break? Covering for Sara Cox on her Radio 1 weekend show when she was unwell. That was a decade ago and led to me getting my own show.

Top of your bucket list? To write a successful comedy for TV or radio.

Philosophy? Everything that happens to you, good and bad, is supposed to happen.

Last film that made you cry? I, Daniel Blake, which I watched on a plane – although I think the altitude affects your emotions.

Where would you time-travel to? The late 1960s and early 70s, when the Beatles and Monty Python were around.

Your first record? Step One by Steps, which my mum got for me as a promotional freebie. I didn’t like it.

Biggest fear? My parents not being around.

Celebrity crush? The actor Chris Pratt [from Guardians of the Galaxy and US sitcom Parks and Recreation] and wrestler and actor Dwayne ‘The Rock’ Johnson, who I recently did a documentary on for Radio 1. I would like to be best friends with both of them.

Happiness is… Sitting on my own in a bar in Tokyo, reading a book and drinking whisky.