Take if all off!’ the disarmingly handsome young man ordered.

‘All of it?’ gulped Angela, sensing by the breathless silence that had fallen over the room that her client was someone. Shrugging, she reached for her scissors. Ten minutes later, his lustrous dark locks covered the studio floor.

It was only after he left that Angela was informed that she had just sheared off the famously long hair of hot new actor Daniel Day-Lewis, who was appearing in The Futurists, a play about Russian poets. 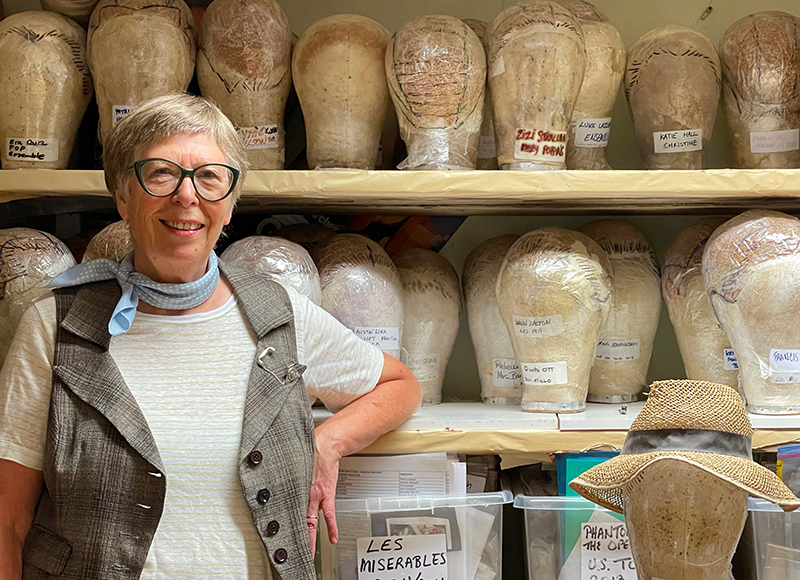 Many women would admit to feeling trepidation when facing such stellar talent, but not Angela. As wig designer to the stars, Angela Cobbin MBE has run her hands through the hair of the crème de la crème of acting royalty, from Judi Dench to Joan Collins, but has yet to meet anyone who has left her feeling intimidated. ‘Why should I?’ says the 75-year-old from Southwest London. ‘I have a talent too, so we meet on level ground.’

Angela’s insistence is evidenced by a meeting with acting legend Ian McKellen in 1984. He was appearing at London’s National Theatre in the lead role of the play Venice Preserv’d and arrived in Angela’s wig department with a veritable entourage. ‘Are you any good at cutting hair?’ he asked. ‘Are you any good at acting?’ she replied, quick as a scissor-snip. With a wry smile, Ian proffered a handshake. ‘Touché!’

As may be imagined from this exchange, Angela’s recently released memoir My Name is Not Wigs! is a colourful romp through her life in wig design. The book takes readers through her beginnings as a hairdressing student in the early 1960s to becoming a theatrical wig designer and the queen of her industry.

She has designed thousands of wigs, first during a two-year stint at Madame Tussauds in 1974, then on their real-life counterparts at the Royal Opera House and the National Theatre, where she honed her trade over 13 years, rising to become the go-to wig designer in the West End and Broadway.

She shed blood, sweat and tears for her art – literally, in one eye-watering case, when she got a fine barbed wig hook embedded in her eyeball.

One can’t help but think that Angela definitely earned her MBE, which she received from Prince Charles, but her trip to Buckingham Palace in 2014 is all a long way from her humble beginnings in postwar Brighton. ‘My parents were both in show business as professional dancers. By 1955, variety was declining so they steered me away from entering the business.’

Angela left school in 1960, aged 15, without an O-level to her name and worked first as a hairdresser in Brighton, before getting a job in a wig boutique, where she discovered something that was to change the course of her life. ‘I found a dusty old book filled with illustrations of exquisitely intricate 18th-century wigs. It stopped me in my tracks. I suddenly saw hair styling for the first time as an art form. I knew that this was what I wanted to do.’

After firing off many letters, she was offered a job at Nathan’s Wigs on London’s Drury Lane. Here, in 1968, the 22-year-old Angela was given a first-class training in bespoke wig-making under the tutelage of Mr Ernest Gibbs and his elderly matron assistants, Edie, Miss Dolly and Lil. ‘They were wonderful characters who looked like they’d come with the building! But they taught me how to master a genuine period look and it was a privilege to see their craftsmanship in action.’

Angela learned how to design and craft wigs by hand, sewing each human hair on individually in a painstaking process that could take ten days per wig. ‘All the hair came from a hair merchant who would travel the world buying Asian or European hair, which had to be cleaned and sorted into lengths.

‘I also learned about the dressing of period styles, such as the use of lovelocks and heartbreakers [ribbons tied to the end of a ringlet] on the long hair worn by men and women alike, especially during the reign of Charles I.’

Sadly, Nathan’s Wigs was dragged into the 20th century when it was sold in 1974 and Angela found herself unceremoniously made redundant.

Next followed a two-year stint at Madame Tussauds as a wig dresser, where she had the grisly task of maintaining the hairstyles of a murderous bunch in the Chamber of Horrors. Then, in 1976, she moved on again – this time to the Royal Opera House wigs department, a more genteel position, or so she thought.

‘My first job was to collect the ballet wigs from the dressing rooms where, much to my amazement, I was confronted with a whole lot of male dancers who were absolutely starkers!’

Not only did Angela find herself a husband at the Opera House – a lovely tenor by the name of Arthur Cobbin, whom she married in 1976– she also discovered her own voice. ‘Opera singers have powerful voices and you can imagine the clarion call of a dressing room full of them, all hollering, “WIGS!” With a determined do-or-die spirit, I approached their territory [the dressing room] and shouted, “LADIES! My name is not WIGS!”’

In the summer of 1980 came a job offer too tempting to pass up, and so it was that Angela found herself crossing the Thames for a job working for the prestigious National Theatre in their wig department.

The work involved punishing 15-hour days, but she felt as if she had come home. ‘Live theatre is so exciting to be a part of and there was such a feeling of belonging, of family.’

While at the National Theatre, Angela had the privilege of working alongside some of the greatest acting talent in the world. Travelling the globe in 1990 with Ian McKellen on a touring production of Richard III was a particular highlight. Making 18th-century wigs for Nigel Hawthorne in the masterpiece The Madness of George III the following year was another. Administering Bach Rescue Remedy to its nervous playwright Alan Bennett pre-performance reveals that even those at the top of their profession are mere mortals. Angela got to see the human side of many of the stars she worked with over the years.

‘Judi Dench is a very cheeky, fun lady and all manner of amusing things happened when she was around. During a play called The Sea, in which she starred with Ken Stott in 1991, Judi persuaded the technicians above the stage to flash their naked bottoms at Ken. “Where is she? I’ll kill her!” he said afterwards.’ Judi was perhaps only upstaged by ‘naughty Nigel Havers’ who used to wave a blow-up doll in the wings to distract his fellow actors.

In 1993 Angela suffered a personal tragedy when her beloved husband Arthur died aged 60 after a long struggle with cancer. They had been married for 18 years. ‘One half of me had gone,’ she admits. ‘My world collapsed.’ Feeling it was time for a change, after 13 years of devotion to the National Theatre, she made the brave decision to go it alone. As actors reinvent themselves, so too do wig-makers.

And so Angela entered the world of film. Her reputation for talent and hard work saw her land a job on the film production of Emma starring Gwyneth Paltrow in 1995.

It was on this production that Angela – who felt she’d developed something of an instinctive feel for famous people over the years– came across Harvey Weinstein. ‘He came in with a girl on each arm. There was such a bad aura around him I physically recoiled. “He’s bad news,” I remarked to my friend.’

More film work beckoned. ‘Joan Collins gave me the third degree on the styles of the period when I was asked to make her an 18th-century wig for the 1999 film The Clandestine Marriage.’ The stunning looks Angela created for a very satisfied Joan are testament to her earlier training with Ernest and Miss Dolly.

The new millennium saw a move back into theatreland and Angela’s most demanding roles ever: creating wigs for musicals including Andrew Lloyd Webber’s Jesus Christ Superstar, Cameron Mackintosh’s musical production of The Witches of Eastwick and, in 2004, Mary Poppins.

Finally, in 2006, the girl from Brighton made it to Broadway. ‘Standing underneath the giant stage on Broadway’s 42nd Street, watching Mary Poppins rise up from under the stage with her umbrella in hand, wearing one of my wigs, took my breath away. It was a truly sublime moment,’ she says.

Five decades from when she began, Angela is still working. ‘There’s no real retirement in this business,’ she jokes, and her most fervent hope is that we do not lose sight of– or hope for – the precious gift of live theatre.

Covid may have wreaked havoc on the profession, but some things will never change. ‘Our hairstyles say so much about how we as women choose to express ourselves,’ says Angela. ‘And so it has been for centuries. You can find an Ancient Egyptian wig circa 1400 BC in the British Museum today. They were such trendsetters.’