With her sparkling style and rebellious streak, Princess Margaret was a designer’s dream. And, as a new book reveals, her jewellery collection revolutionised the royal dress code. By Claudia Joseph.

Princess Margaret was always known as the royal rebel: the sister who chose to do things differently.

And jewellery was one of the areas where her attitude was most markedly modern. Even on her wedding day, she broke protocol by eschewing a family heirloom for the Poltimore tiara, a piece she had bought at auction for less than £6,000 before her engagement. She wore it on numerous occasions before and after her marriage – most famously when she was photographed wearing it in a bathtub by her husband.

The princess was always at the height of fashion and her patronage was bountiful and much coveted. In her new book on jewellery design, author Mary Ann Wingfield reveals how Princess Margaret and her husband Lord Snowdon (born Antony Armstrong-Jones) championed young British designers in the Swinging 60s. At that time Britain was on the cusp of change. And while the Queen represented the old guard, Princess Margaret was viewed as a glamorous party girl married to a hip photographer and design aficionado.

In the book’s foreword, Margaret’s son David Armstrong-Jones writes: ‘I inherited my love of design from my father, the 1st Earl of Snowdon, who was always fascinated by pushing the boundaries of an object to see where the design potential might end up. It was he who encouraged my mother, Princess Margaret, to support the creative talent of the independent jewellery designers who were testing the boundaries of new possibilities in the early 1960s.’

Four years after Margaret’s death in 2002, her jewellery was put on display for the world to see in the most anticipated auction this century: more than 1,000 buyers packed into Christie’s Auction House in London’s St James’s on 13 June 2006 to bid on her iconic pieces. While models walked the room carrying the jewels and Fabergé gems on plumped cushions to display to interested buyers, men in suits whispered into mobile phones to billionaire clients.

Margaret’s dedication to her collection was clearly evident, remembers Wingfield. ‘Princess Margaret is a good example of a great collector – she was meticulous about keeping her jewellery in its individual boxes. Every piece had been carefully recorded and had a story to tell.’

THE DESIGNERS BEHIND PRINCESS MARGARET’S JEWELLERY 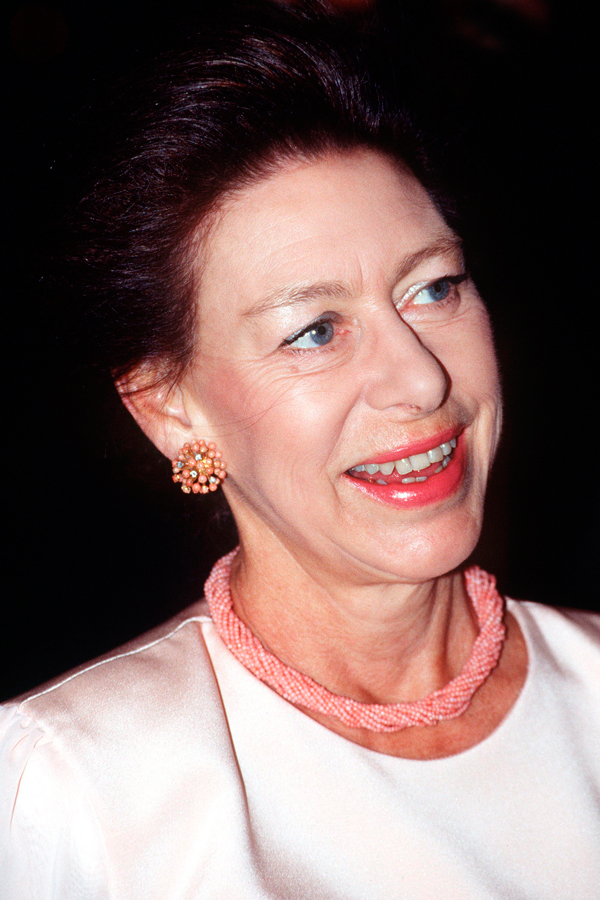 One such designer was former stone dealer Michael Gosschalk. His shop in London’s Belgravia – with its Rococo décor, silk drapes and intimate ambiance – was far removed from the Bond Street jeweller of the day.

Described by Tatler as an ‘artist in diamonds’, Gosschalk, then 34, and his society milliner wife Jenny Fischer soon attracted a glittering clientele. He favoured modern design and semiprecious stones. So it was a meeting of minds when he met Margaret and Antony.

The year of her wedding, Gosschalk made Margaret a pair of coral and diamond ear clips, while his wife created hats for many of the guests. Forty-six years later, the ear clips– in their original box– sold at Christie’s for £10,800. Sadly the Gosschalks’ fame attracted less salubrious attention and after they lost £50,000 of jewellery in a terrifying robbery in 1965, they moved to Monte Carlo.

The man who would come to be known as the father of modern jewellery, Andrew Grima was 43 when he first met Lord Snowdon in 1964 after inviting him to tour his workshop – and a lifelong friendship ensued.

By 1966, when Grima won the Duke of Edinburgh’s Prize for Elegant Design – the only jeweller ever to do so – he had become the designer of choice for the fashionable crowd, who coveted his daring abstract creations, colourful gems and exotic minerals. That year he also opened his first shop, in London’s Jermyn Street. It was a glittering occasion and Lord Snowdon was guest of honour.

The Queen, Queen Mother, Princess Anne and Princess Diana all became customers– but it was Princess Margaret who was the most avant-garde. She had been presented with a Grima brooch, made of textured gold wires contrasting with brilliant-cut diamond flames, on her admission to the Freedom of the Haberdashers Company that year– it later sold for £24,000 at Christie’s.

But she wanted a more personal piece and asked Grima if he could cast in gold a piece of lichen she discovered on a walk at Balmoral. Grima duly obliged, charging her a token fee of £1, in 1967. Grima’s generosity proved a bonus to the princess’s offspring: that £1 brooch sold at Christie’s for £12,000 and the matching earrings made £9,600.

The go -to jeweller: JOHN DONALD

Another jeweller patronised by the princess during the 1960s was John Donald, a Royal College of Art graduate who set up his workshop in London’s Bayswater in 1960 and won a De Beers award for jewellery in 1963. The following year Lord Snowdon introduced his wife and mother-in-law, the Queen Mother, to the silver and goldsmith.

Margaret maintained a relationship with Donald that lasted for decades. In 1982, when she was 52, he created a brooch for her (pictured above) –a series of openwork textured gold cells with hammered edges containing carved ruby and sapphire drops and decorated with brilliant-cut diamonds– and the following year he made her matching ear clips.

By the time she died, she had amassed an incredible 16 pieces in her collection, far more than any other designer 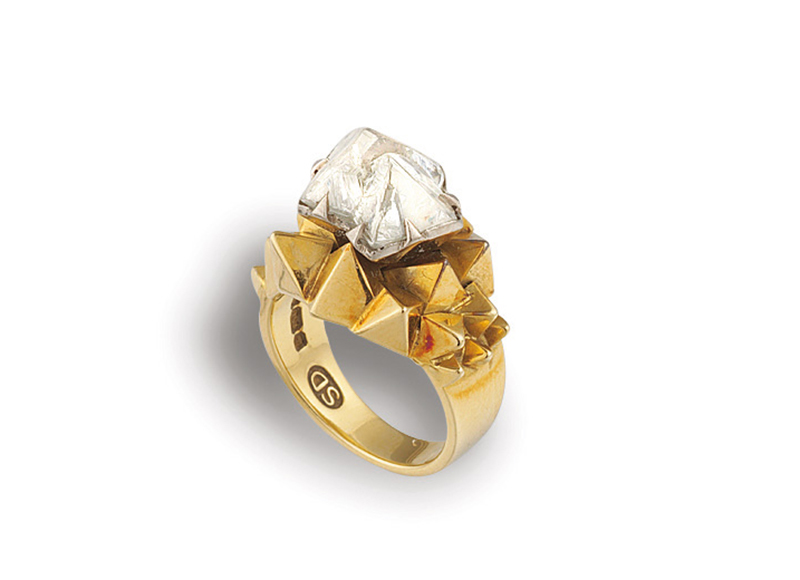 In 1977, Princess Margaret commissioned Australian jeweller Stuart Devlin to create a gold macle diamond crystal ring (below; ‘macle’ refers to the twinned crystals). It later sold for £30,000 – ten times its list value– at Christie’s, proving her ability to spot talent.

Devlin came to London in 1960 aged 29 to study at the Royal College of Art, and went on to win the competition to design the first decimal coinage for Australia.

In 1980, the Queen appointed him a Companion of the Order of St Michael and St George ‘for service to the art of design’. In 1982 he was granted the Royal Warrant of Appointment as Goldsmith and Silversmith to Her Majesty. Prince Philip described him as ‘probably the most original and creative goldsmith and silversmith of his time’.

The king of bling: THEO FENNELL 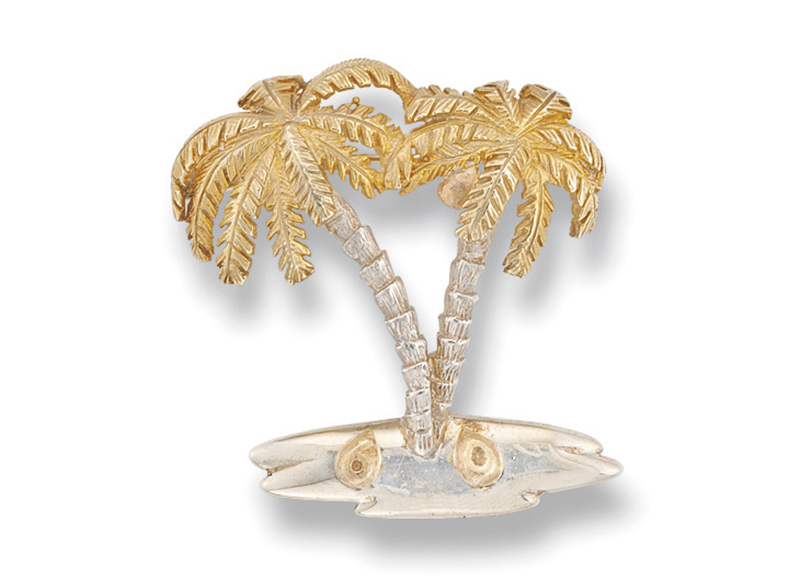 In 1990, when she was 60, Margaret discovered Theo Fennell who, at 38, was making his name designing quirky pieces for celebrities such as Sir Elton John. He created a three-coloured palm-tree brooch for her (above), which sold 16 years later for £11,400. Old Etonian Fennell is the father of Oscar-winning filmmaker Emerald and fashion designer Coco.