The Duchess of Cambridge has always paid homage to her late mother-in-law when dressing for key occasions. Claudia Joseph picks the eight outfits that have inspired her most.

When the Duchess of Cambridge arrived at a glittering dinner in the Bahamas on the final night of the Queen’s Platinum Jubilee Tour, she drew comparisons with Hollywood icon Grace Kelly, who wore an ice blue gown to the 1955 Academy Awards when she won an Oscar for her role in The Country Girl. But Kate is not the first member of the Royal Family to bring back memories of Princess Grace: her late mother- in-law Princess Diana channelled the star when she went to the Cannes Film Festival in a chiffon gown reminiscent of Kelly in the 1955 film To Catch a Thief.

According to a source close to the Duchess, Kate often pays homage to Diana with her showstopping outfit choices. ‘Kate admired Diana’s taste in fashion before William came into her life,’ said the source. ‘During her school days she’d tell friends that Diana was her style icon.’

The Caribbean tour was a poignant moment for the Duchess, who has been a global fashion icon since she became engaged to Prince William in 2010. The ‘Kate effect’ means that anything she is pictured wearing sells immediately (the Issa dress she wore for her engagement portrait, opposite, sold out in minutes). In 2012 her style influence was credited with boosting the British fashion economy by up to £1 billion. Her power remains unparalleled: recently, a £179 Holland Cooper jumper she wore on CBeebies Bedtime Stories sold out in hours, while designer Grace Wong said her sales doubled after Kate carried one of her handbags.

These are Diana’s key outfits that have most inspired Kate… 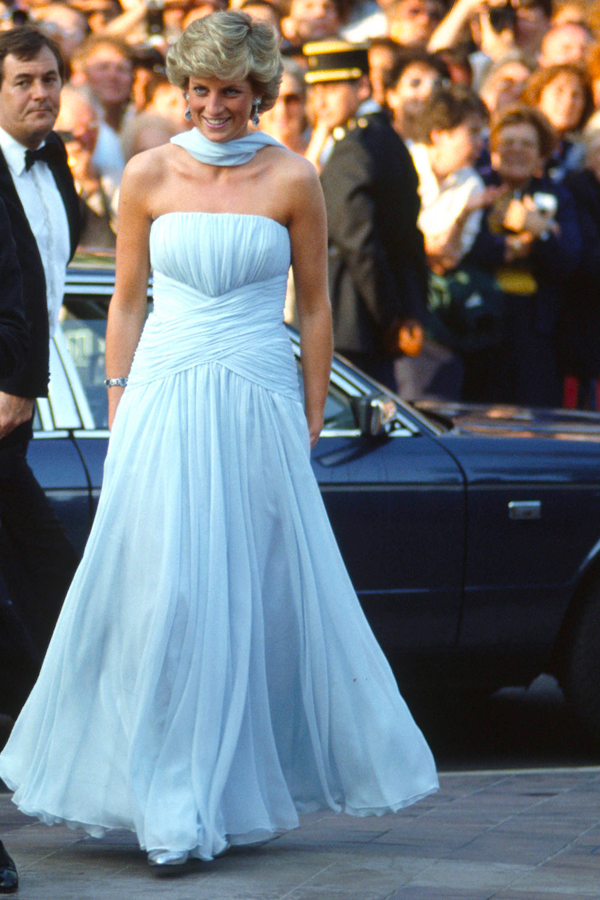 Diana When the Princess of Wales wore her Catherine Walker pale blue silk chiffon strapless gown and matching stole to the Cannes Film Festival on 15 May 1987, she sparked comparisons with movie star Grace Kelly. She and Prince Charles were attending a gala in honour of the actor Sir Alec Guinness. 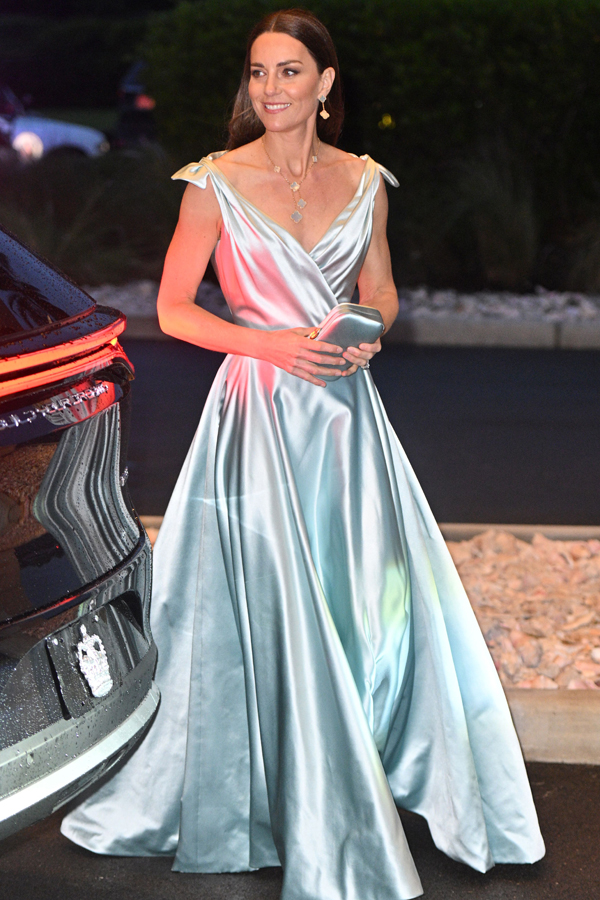 Kate Last month Kate also channelled Grace Kelly during a glittering dinner on the final night of the Caribbean tour. In a nod to the Bahamas flag, which has gold and aquamarine horizontal stripes, she teamed Phillipa Lepley’s Vienna Crossover gown with a Lulu Guinness Hayworth bag, Gianvito Rossi pumps and Van Cleef & Arpels jewellery. 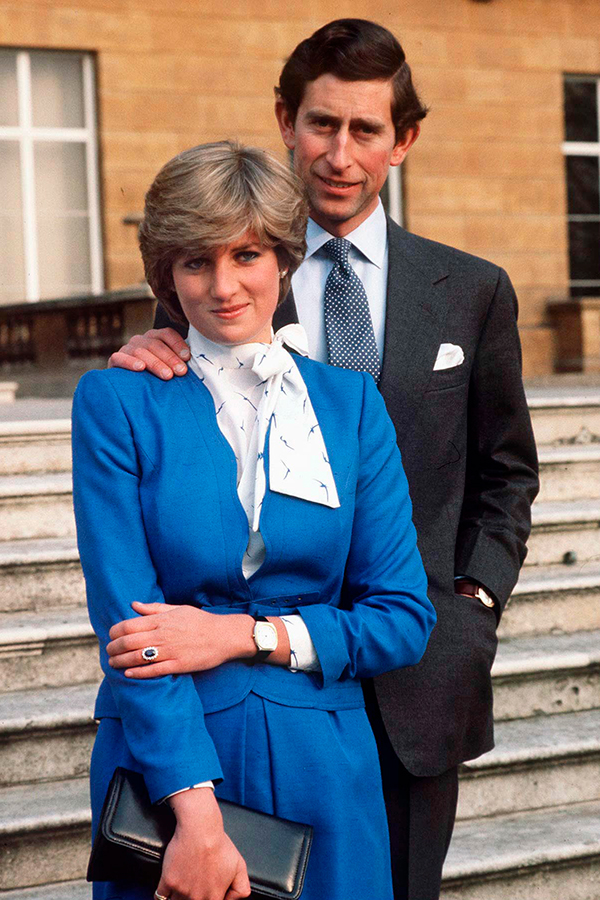 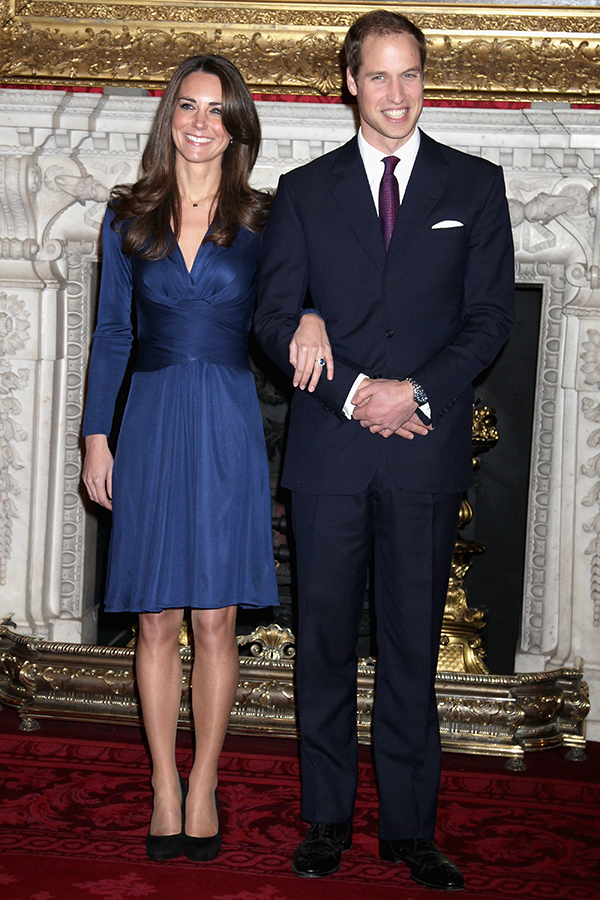 Kate When Prince William and Kate Middleton announced their engagement on 16 November 2010, she took inspiration from her late mother-in-law by choosing a royal blue Issa dress to match Diana’s ring. Harry had inherited the ring from his mother but gave it to William when he was planning to propose, which he did on holiday in Kenya, after carrying the £300,000 gem in his rucksack for three weeks 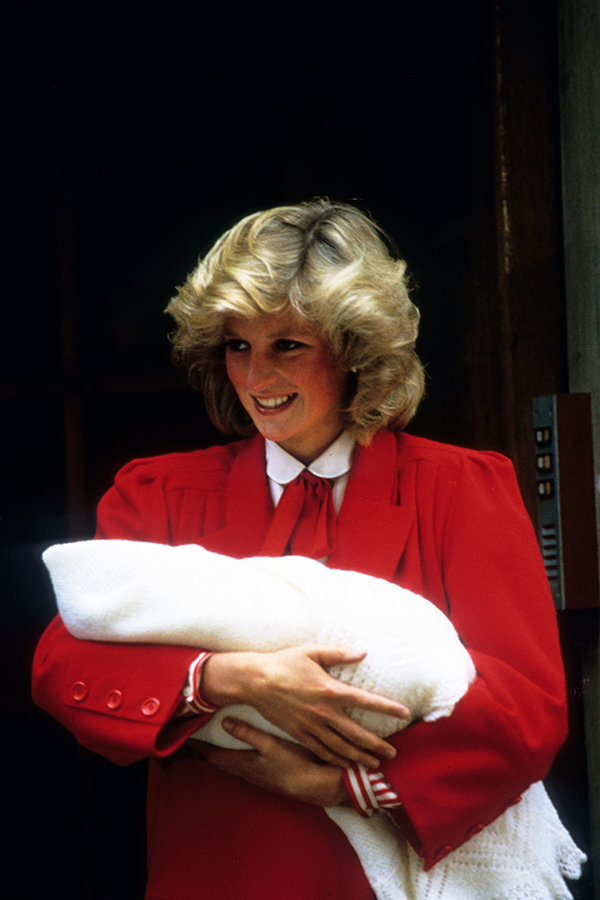 Diana After Prince Harry was born on 15 September 1984, Diana wore a scarlet coat by designer Jan Van Velden, a matching dress with a white Peter Pan collar and red pumps as she left the Lindo Wing of St Mary’s Hospital in London with her newborn son. 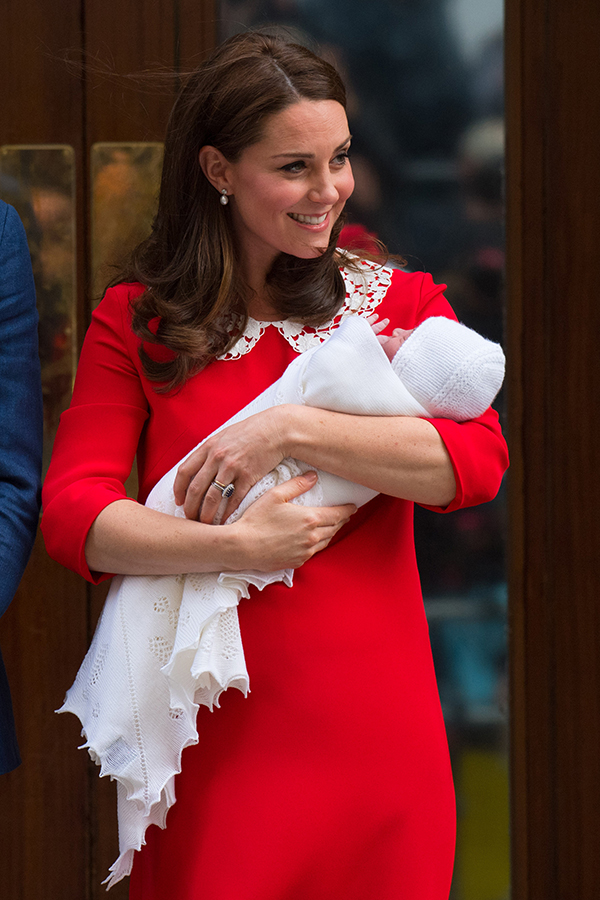 Kate When the Duchess departed the same hospital, after the birth of second son Prince Louis on 23 April 2018, Kate was again inspired by Diana. She chose a bespoke red Jenny Packham dress, with a white lace collar – and her favourite nude shoes. 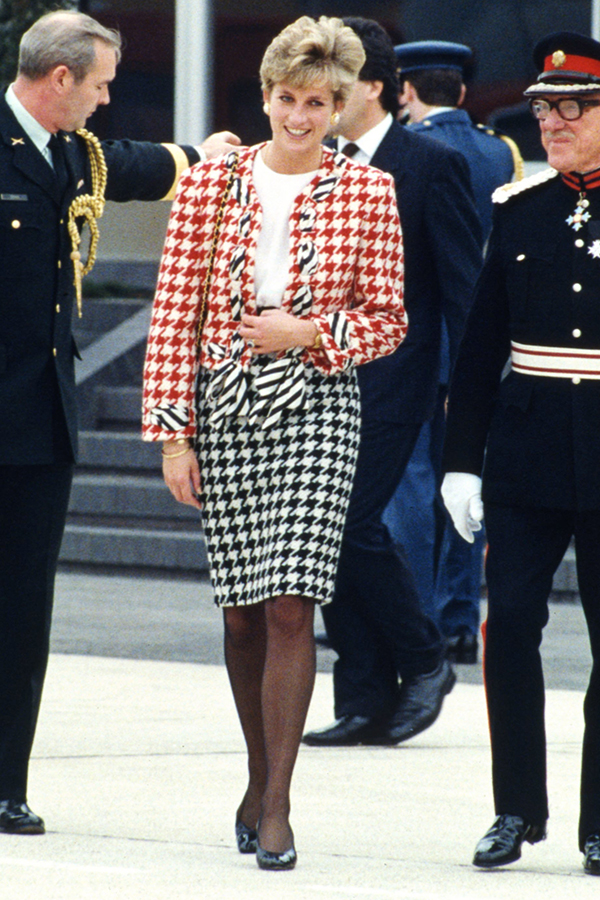 Diana The Princess wore this Moschino Cheap and Chic houndstooth blazer and skirt during a tour of Canada when she ran to embrace her sons William and Harry as they boarded the royal yacht Britannia in October 1991. 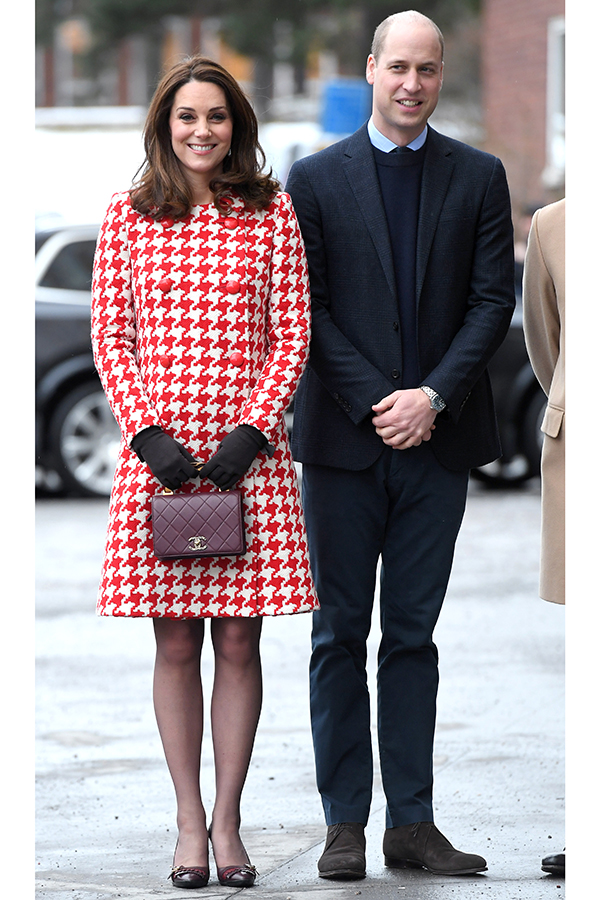 Kate It may have been an unconscious tribute to the late Princess, but the red Catherine Walker houndstooth coat that Kate wore on 31 January 2018 – on the second day of her Scandinavian tour in Sweden – nonetheless brought back memories of William’s mother. 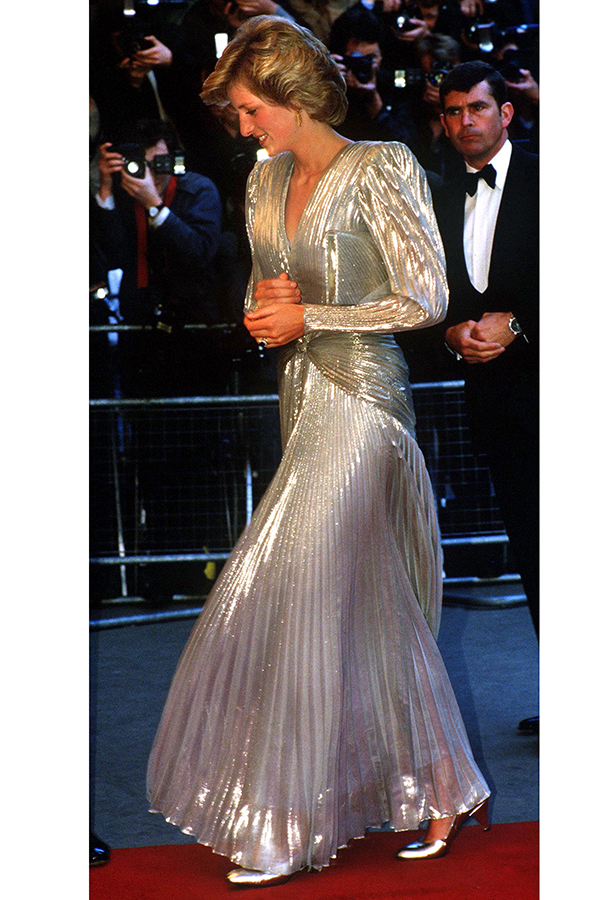 Diana The Princess blazed a glittering trail when she wore a silver backless Bruce Oldfield dress to the gala premiere of the Bond movie A View to a Kill in 1985. There she greeted actor Roger Moore, who was making his final outing as 007. It was the second time she had met the actor: she also attended the 1983 premiere of Octopussy. 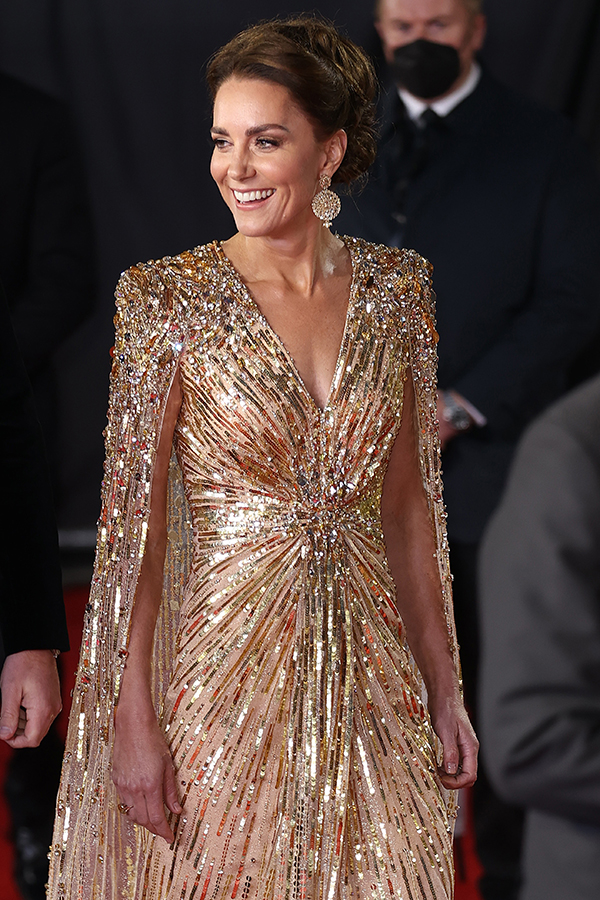 Kate When the Duchess of Cambridge arrived at the premiere of the latest Bond film No Time to Die at London’s Royal Albert Hall last year, she stole the show, entrancing its star Daniel Craig and making headlines around the world. ‘You look jolly lovely,’ he said, complimenting her on her shimmering gold Jenny Packham gown 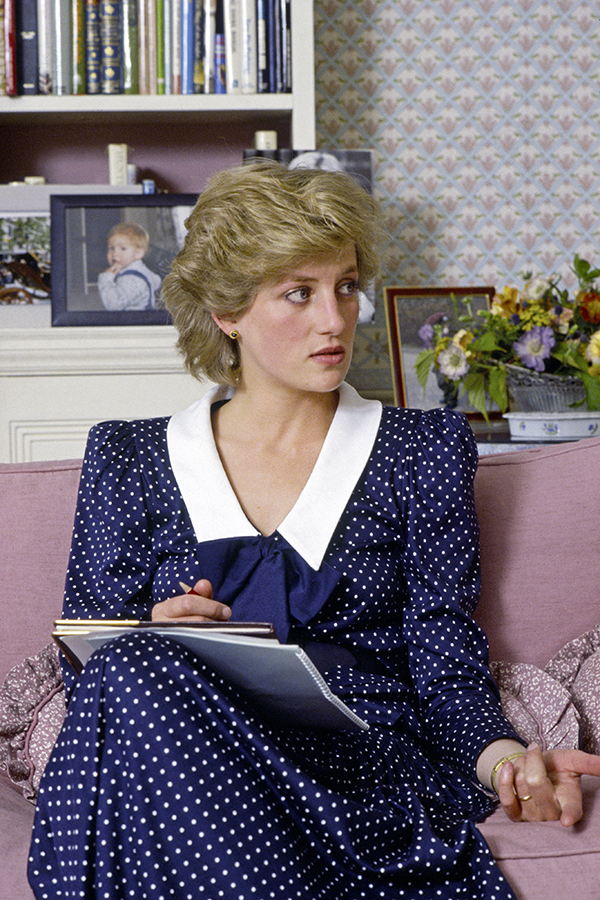 Diana Photographed in a private moment at Kensington Palace on 6 October 1985, Princess Diana wore a blue and white polka-dot dress with an oversized white collar that was copied around the world. 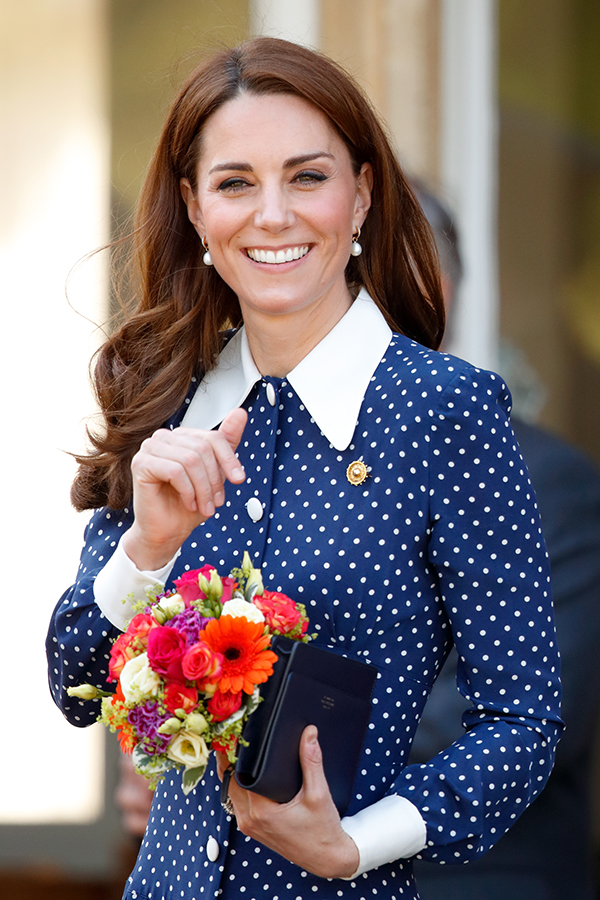 Kate In a touching tribute to Diana, Kate wore an Alessandra Rich polka-dot dress for a family portrait to celebrate the 70th birthday of her father-in-law Prince Charles in November 2018. She wore it again when she visited Bletchley Park the following year. 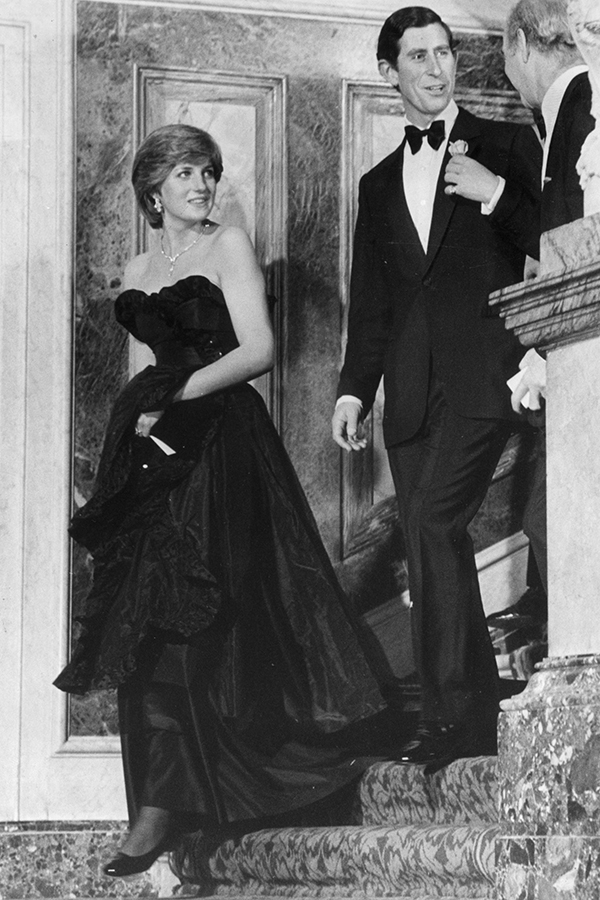 Diana For her first public engagement, when she accompanied Prince Charles to Goldsmiths’ Hall on 9 March 1981, Diana wore a black dress by designers David and Elizabeth Emanuel, who would later design her wedding dress. She chose the gown because it was ‘a real grown-up dress’ but didn’t realise how much décolletage it revealed. 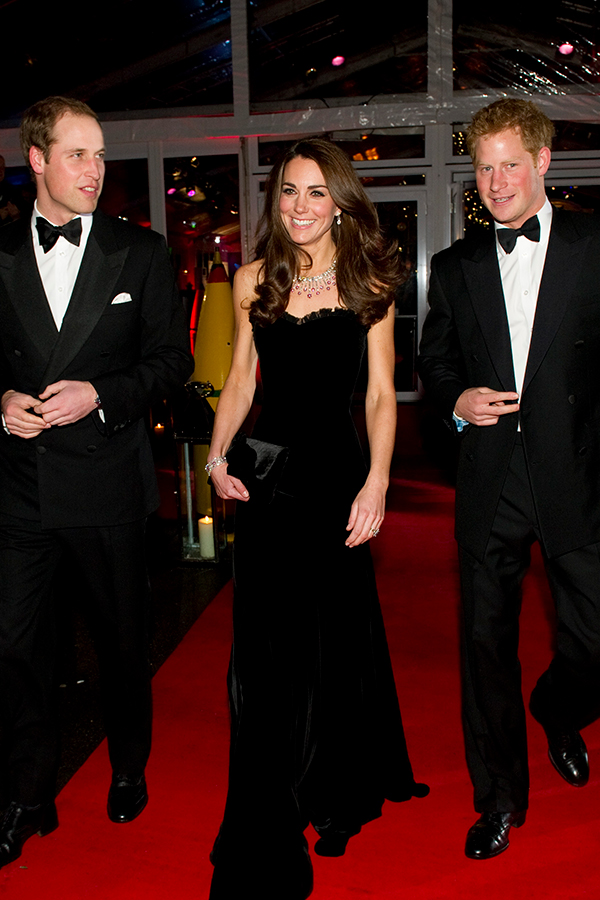 Kate The velvet strapless Alexander McQueen gown that Kate wore to A Night of Heroes: The Sun Military Awards on 19 December 2011 drew comparisons with Diana’s ‘grown-up dress’. However, there was one difference– the sweetheart neckline was higher cut, revealing less of the Duchess. 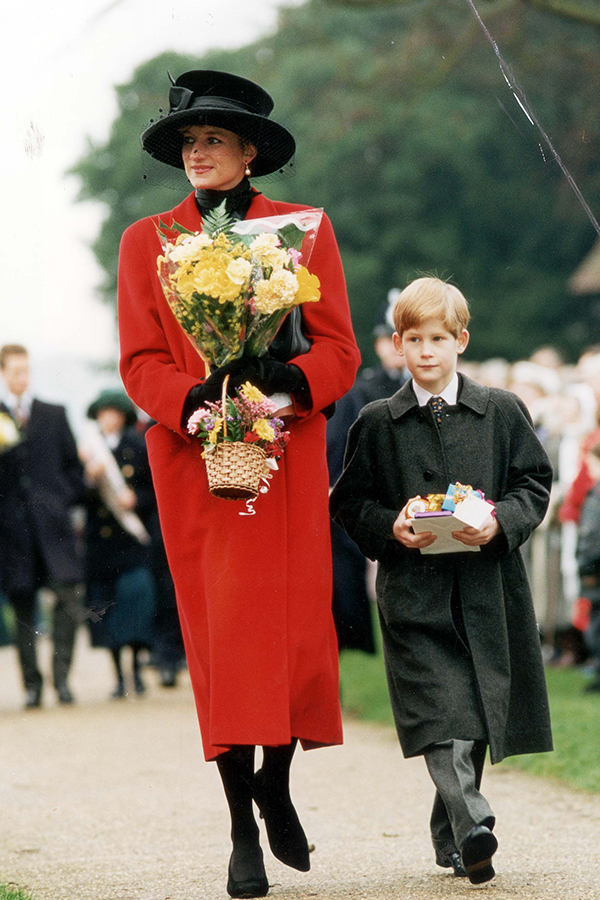 Diana Carrying flowers from fans as she walked with nine-year-old Harry to St Mary Magdalene church at Sandringham on Christmas Day 1993, Diana teamed her festive red Jan Van Velden coat with black accessories. She and Prince Charles had been separated a year. 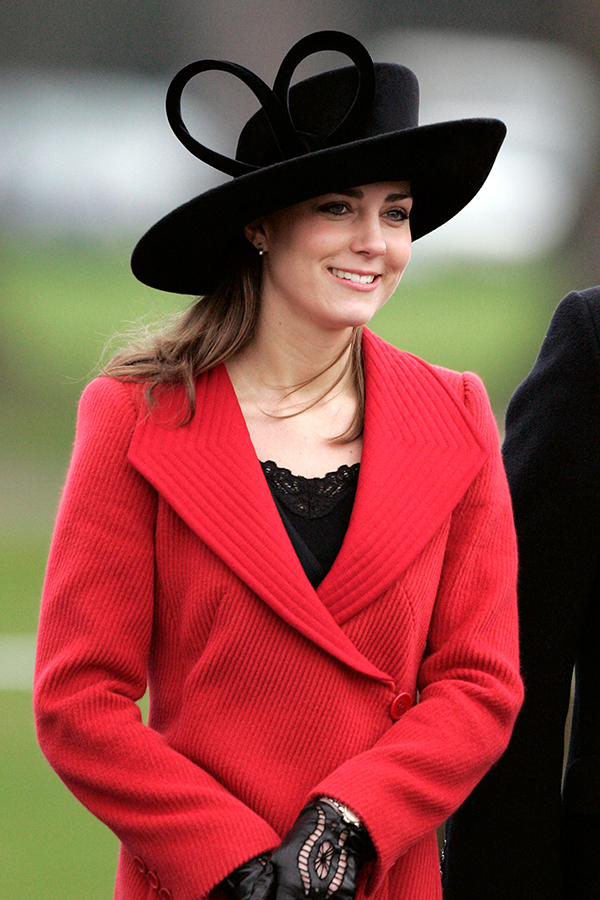 Kate The Duchess teamed a scarlet Armani coat with a black Philip Treacy hat and long black boots to watch her then boyfriend William pass out from the Royal Military Academy Sandhurst on 15 December 2006. The invitation sparked rumours of an imminent engagement, but it would be another four years– with a break-up in between– before the announcement came.

The moguls, models and eccentric editors that made Vogue a success

5 brands taking steps in the green direction this World Earth...

YES YOU CAN: Wear strappy sandals with anything

Victoria Beckham and the Spice Girls team up to celebrate Pride...

The Chic List: ‘The secret to a happy wardrobe’