Even  if she wasn’t starring in Netflix’s smash-hit Emily in Paris playing the formidable Sylvie ‒ boss and nemesis to Lily Collins’s Emily ‒ with such froideur, I’d still feel terrified about interviewing Philippine Leroy-Beaulieu. While it’s never polite to generalise, 20 years of working in the French capital have led me to conclude that while Parisian women are many wonderful things ‒ intelligent, passionate, focused, droll ‒ lighthearted chit-chat isn’t their thing. Banter? They’d sooner wear Crocs.

That Philippine has chosen to meet in a chichi London hotel is not surprising. That she is smouldering in a semi-transparent blouse and softly tailored jacket is not surprising either. That she looks radiantly beautiful in a natural ‘it’s just my genes’ Jane Birkin way is so far, so very French. And then she orders in impeccable English: ‘Earl Grey tea, please. And a little piece of cake.’ 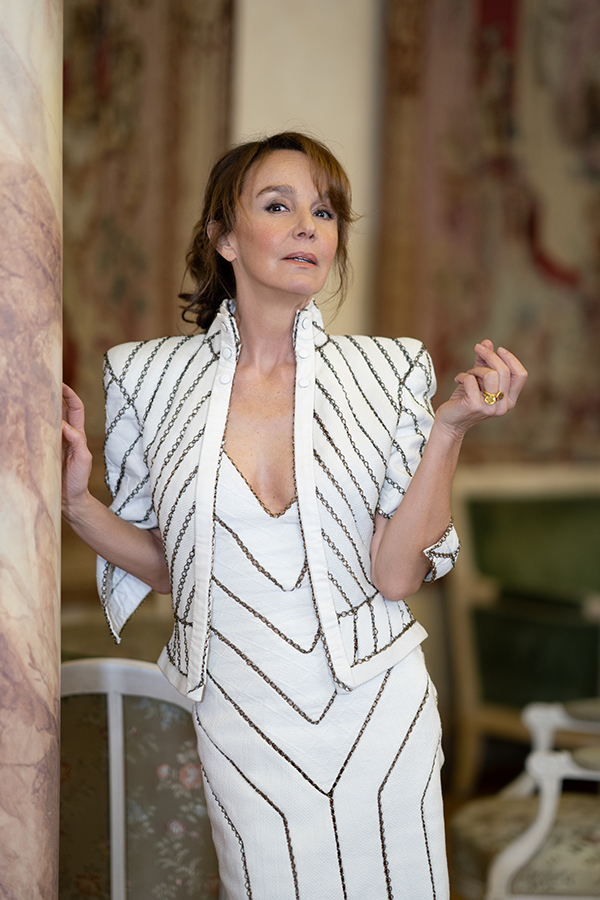 Philippine, I discover as we chat, is warm, quick to laugh and deliciously candid, even if she’s unable to give away details about the second season of Emily in Paris, the show created by Darren ‘Sex and the City’ Star that was viewed by 58 million households in its first month of release. ‘I’m not supposed to say anything,’ she demurs. ‘Let’s just say that we’ll get to see a totally different side of Sylvie.’

French viewers will be hoping that this side includes fewer clichés, for it’s fair to say that in France, the first season of Emily in Paris went down like a lead baguette. ‘The berets. The croissants. The hostile waiters. The inveterate philanderers. The lovers and the mistresses. Name a cliché about France and the French, and you’ll find it,’ sniffed the French news outlet 20 Minutes. Although arguably, the entire cast is composed of caricatures: Emily is as stereotypical a portrait of the self-centred, over-confident American millennial as Sylvie is of her haughty, intimidating, chain-smoking French boss.

What does Philippine think of the criticism the show has received? ‘My answer is that Parisians have no sense of humour,’ she retorts. ‘A lot of the stuff that is said is true.’

To Philippine, Sylvie is a far more nuanced character: ‘She’s strong and vulnerable. She stands her ground. She doesn’t appreciatea little American telling her what to do or say.’

She says the casting process was very simple. ‘Although they were looking for a much-younger woman,’ she says slyly, with a throaty laugh. ‘But I read for them, and then it happened.’ You could say Philippine was born into the role: ‘My mother worked in fashion with Dior for 20 years. I’ve known women like Sylvie since I was a kid. They’re basically scared: scared of losing their beauty, scared of ageing.’

When Philippine says her mother, Françoise ‘worked with Dior’ she isn’t exaggerating: as head of accessories, she oversaw the jewellery and handbags for each collection. ‘It was a big thing,’ she concedes. ‘The people she worked with were full of sh*t, but fun. They’re superficial, but at the same time, they’re creative geniuses.’

For someone who grew up in such a gilded world, Philippine is very down to earth. ‘I wasn’t sitting in the front row. I was backstage with the models, thinking they’re goddesses, and how I’m never going to look like that. That gave me a huge complex, but it was a lot of fun. I was already an actress in my head, because what really interested me was how they put the show together, and how the models expressed themselves. The girls used to smile, play around and do little dances.’

Did she ever want to be one? ‘No, never.’ Perhaps because she saw the drawbacks that beauty can bring? ‘My mother was very beautiful. She made other, older women jealous. I saw that jealousy, and how mean they could be to each other. It came from being frightened of losing your job, your place, your territory. And that was very inspiring when it came to playing Sylvie.’

If Sylvie’s character was familiar to Philippine, so too was her look, which she worked on with costume designer Patricia Field. With her pencil skirts and vertiginous heels, Sylvie reminds me of Carine Roitfeld, the former editor of French Vogue who wore this uniform religiously, even in the snow. ‘Maybe it was subconscious, but when we designed the costumes we focused more on classical Hollywood actresses like Bette Davis, Joan Crawford and Ava Gardner.’

British women have always revered French style: does Philippine? ‘I admire how British women dress, because they’re so free.’ She doesn’t think we’re scruffy? ‘That’s the charm! French women are impeccable. Everything goes with everything. It’s a bit boring.’

She also admires British warmth, which she frequently encounters when visiting her daughter, Tais, 30, an artist who lives in East Sussex. ‘Paris is not a very easy city,’ she notes. ‘People are like closed shells. It makes it hard for people to integrate when they’re new.’ She speaks from experience: after her actor father, Philippe, and her mother divorced when she was 11, she and her mother moved to Paris from Rome. ‘I’m French with a French name, and I was still treated like a foreigner. And because I had a little accent at that time I was hated by my peers at school ‒ even by the teachers. “You’re not one of us!” Parisians, they’re not welcoming.’

Whether Philippine has always been outspoken or, at 58, feels she has earned the right to be is immaterial: her candour is refreshing. She clearly doesn’t suffer fools, and speaks with the pragmatism of a person who has been in the business for a long time. ‘It’s simple,’ she says of her decision to become an actor. ‘My father’s an actor. It’s in the genes.’

After starting out in commercials as a teenager, she enrolled in drama school, picking up bit parts in films throughout her 20s. Her breakout role was playing a single mother in the 1985 comedy Trois Hommes et un Couffin, a runaway hit in France that earned her a César nomination for Most Promising Actress (the movie was remade by Disney in 1987 as Three Men and a Baby). Years of smaller parts followed, until Dix Pour Cent (better known in the UK as Call My Agent!) came along, in which she played Catherine, the formidable but long-suffering wife of agency boss Mattias Barneville. First shown on Netflix in 2015, it was an international hit. ‘I was at that moment in an actor’s life when you’re thinking, “Am I going to have to stop?” when the director Cédric Klapisch cast me for that part. I told him he was bringing me out of the tomb,’ she laughs.

I wonder whether older French actresses suffer from the same paucity of roles as their British counterparts. ‘Yes, it is true,’ she concedes. ‘That’s why I’m so happy to have Sylvie because I can play something other than a mother or a grandmother. It is slowly changing, thanks to people like Meryl Streep who have been fighting for better roles. We’ve never written films about all the adventurers, painters and musicians that were women. We’ve been writing roles for men.’

She has strong feelings on the MeToo movement, but has avoided the victim role herself, saying the threat of rejecting a man’s advances never caused her to acquiesce. ‘F*** it – just take the risk [of saying no]. I took it many times, and I didn’t do the movie. When you’re in the business, you see it coming. You know how it works. I don’t go to certain parties. You don’t put yourself in that position. You have to be careful. You know that hell exists: you just don’t walk in it.’

We return to Emily in Paris and what the future holds. ‘Stuff is happening. There’s going to be more Emily, unless this is a disaster. But I don’t think so.’ I don’t think so either. No matter that she’s in high heels and a pencil skirt: Sylvie will run and run.

Everything you need to know about Luther season 5

The most watched BBC show of the year has been revealed

Gwyneth Paltrow says this is why she and Chris Martin still...

EMOTIONAL TIES: Lulu Guinness shares the things that mean the most...

EMOTIONAL TIES: Philippa Perry on finding happiness in the handmade

TELL TRINNY: How do I stop my copycat friend?