She knows all her ‘girls’ by name, lets them live to a ripe old age and has a very handsome ram. Paula Steer is one of the new breed of women revolutionising what it means to be a sheep farmer.

Sunday morning and Paula Steer is in her kitchen at Twig Farm stirring gravy over the range. A rib of beef is cooking in the Aga and her yorkshire puddings are coming on a treat. A loud bleating shatters the domestic tranquillity, followed by a shout. ‘Mum, we need you! It’s a double and they’re stuck.’ Paula races outside to the meadow, plunges her hand into the stricken ewe, untangles, then delivers twin lambs – and still makes it back in time to rescue her burning gravy.

Welcome to the busy world of the Devon Shepherdess. Paula, 53, is one of a new breed of multitasking shepherdesses blazing a trail across social media, challenging perceptions of the job and inviting the public to take a glimpse beyond the farm gates. Our Yorkshire Farm, about the life of shepherdess Amanda Owen and her family, was Channel 5’s highest-rated factual programme last year and the bestseller lists are dominated by books about shepherdesses, such as Amanda’s The Yorkshire Shepherdess and Northumberland-based Emma Gray’s My Farming Life.

Watching women take on the traditionally male-dominated world of agriculture has clearly captured the zeitgeist. Unlike typical commercial sheep farmers, who have flocks of 800-plus sheep, Paula oversees a smaller family business called Lily Warne Wool. Twig Farm, on the edge of Dartmoor in Chudleigh, Devon, is where she keeps and tends to her 60 greyface Dartmoor sheep, with the help of her 57-year-old husband Keith and eldest son Lewis, 26. Paula’s younger son Ben, 23, is training to be a PE teacher.

Paula has named all her ‘girls’ and can distinguish them at a glance. The escapades of Mabel, Violet, Blossom and the rest of the flock are shared with her 3,000 devoted Instagram followers and via her monthly ‘ewesletter’. There’s plenty of drama (bringing lambs back from the dead by hand-feeding them through the night and warming them in her Aga) and triumph, too (matching Hope, an orphan lamb, with new surrogate mum Cherry). It’s a long way from the accountancy career that Paula left 20 years ago. ‘It was the family business,’ she explains. ‘I did it because it was expected of me, but I hated it.

‘Then when I was 32 I became ill and had to have a hysterectomy. I was sad not to be able to have any more children but it did make me realise life is too short to be doing a job you hate. I’d always loved sheep, so I threw caution to the wind and my friend Nancy, a farmer’s wife, taught me all she knew. She thought I was bonkers to leave a well-paid career, but my mind was made up.’

Paula started with just three greyface Dartmoor ewes, who she named Primrose, Beryl and Mabel. Although the breed once dominated Dartmoor, they are now on the endangered list. ‘Sadly they’re a rare breed because they need more care,’ Paula explains. ‘Their wool is heavy and they require shearing twice a year, so commercially they’re not attractive to most farmers.’ It is precisely this thick wool that attracted Paula, as unlike other sheep farmers who breed and sell their livestock for meat, she makes her business pay with her own-design wool products.

Paula soon realised the other benefit of the greyface sheep is that they’re great breeders. ‘They are short and squat with big behinds, just like me,’ she jokes. ‘In no time, I was breeding them successfully and we increased our flock year on year. We had to rent an additional 45 acres on top of the 14 we own.’

Contrary to the belief that sheep are dim, Paula insists her girls have vibrant personalities. ‘Take Primrose [named after one of her original sheep],’ she says. ‘Technically, she’s retired, but she can’t help herself. Last year, we had a ram in the next field to her and one morning I found a Primrose-shaped hole in the hedge. I thought she was past it, but when I found her she had the ram cornered – five months later she had a lamb. Just goes to show, never rule out an older female!’

Paula believes her maternal streak makes her a more sensitive shepherdess. ‘A lot of male farmers start breeding their sheep when they turn one, but I think that’s too young so I wait until they’re two. I won’t farm for meat either,’ she adds. ‘I can’t eat roast lamb, it smells just the same as a newborn lamb.’

She also refuses to cull older sheep. ‘My sheep retire when we feel the time is right, usually when they struggle to rear a lamb or haven’t got pregnant for a while. Generally sheep live to between ten and 12 years, and my girls live to a ripe old age. We’ve got 11-year-old Beryl, blind as a bat but loving life.’

Paula explains that the farming life is dictated by the seasons. Spring is for lambing and summer is for taking stock. ‘At the end of the summer farmers give their ewes a check,’ Paula says. ‘They are put through what we call the race, which is like a funnel, and there you look at their teeth and udders to see if they’re in good health. At the end of the race are two gates: one is for the ewes that are good to mate, the other leads to the abattoir. In mine, the other gate leads to a retirement home. I don’t cull my sheep. How could I? They’ve given me lambs!’ Looking after your flock, says Paula, requires an optimistic outlook. ‘We’ve got a ewe called Rose. Every year she’s been “empty” and every time I say, “Let’s give her a chance”. Now, I’m delighted to say, Rose has finally had a lamb after six years of trying.’

Paula’s sense of resilience has been passed down from the strong women in her family. ‘I named the business after my great-great-grandmother Lily who was one of the original shepherdesses, farming on Dartmoor at the turn of the 20th century. Lily had a tough life. She married her childhood sweetheart Thomas Simmonds and had three girls, then was widowed at 33 when Thomas died in the First World War. It was a case of “pull your breeches on, girl, and get on with it”. She had three daughters to feed.’

Working as a pub landlady, 4ft 10in Lily went on to marry a 6ft 4in farmer. They took on a ramshackle farm in a remote Dartmoor hamlet, and prosaically named it ‘Bold Venture’. ‘No one had dared to farm there before,’ says Paula. ‘Family folklore has it that escaped convicts from the nearby prison would break in during the night and steal their clothes which were drying over the range. Lily would get up in the morning to find prison clothes dumped on the kitchen floor.’

But it turned out the biggest danger was closer to home. ‘Her second husband broke Lily’s knees and fractured her collarbone, but he never broke her spirit. In the end, her daughter, my great-aunt Mabel, literally carried her out of there and she lived with her for the rest of her life.’

Paula was 13 when Lily died, and still gets emotional talking about her. ‘She taught me so much about survival and humanity. She used to knit mittens for the postmen who had to ride over the moors to deliver the mail and she passed her needlework and knitting skills down to me. I never consciously registered that I was carrying on her legacy until one day in 2011 when my grandmother Kathleen came to Twig Farm and said, “My word, you’re farming greyface sheep like Lily did!” It felt like fate that I was carrying on the family tradition and I hope she’d be proud of me.’

Paula intends to channel this diminutive matriarch’s flair for survival into her next challenge. On her birthday in March, instead of eating cake on the beach with her family as she’d planned, she faced a sobering hospital appointment. ‘Scans showed I have a brain tumour,’ she says. ‘I’d been suffering from vertigo and falling over, but I’d been so busy I assumed I was just run down.’ The tumour is benign, but is deep in her cerebellum and doctors will monitor it before deciding on a treatment plan. Paula, who now has hearing aids to help with hearing loss and steroids to control the tumour’s growth, is sanguine. ‘In hospital I had time to reflect. I could either give in to the overwhelming tiredness and fear, or I could empower myself. I’ve told my boys and Keith, I don’t plan on dying. I look at it as a hurdle in life!’

One of the pleasant side effects of having to rest has been reconnecting with her love of crochet. ‘I believe in farm to yarn, just like Lily did. All our fleeces go to a wool mill, then two local ladies use it to knit and crochet beautiful wool products that I design.’ When Paula went on Countryfile in 2014 to show off her crocheted poppies, her website went into meltdown and it’s easy to see why. Her soft-as-kittens baby booties and hats are instantly covetable. ‘Increasingly my thoughts turn to Lily and what she would do,’ Paula says. ‘She inspired me with her strength and resourcefulness. She survived wars, poverty and brutality. So too shall I survive this.’

Paula draws comfort both from the hundreds of messages she gets from her social-media followers, who have fallen in love with Twig Farm, and the farm itself. ‘Last week I had my first proper walk since the diagnosis – I need a stick now to keep me upright. The meadows were smothered in pink campion and cow parsley and a little robin followed us. In the distance I saw my girls Primrose, Blossom and Rose, a beautiful link to the women of the past, and to the future I must now fight for.’

Paula’s pick of her flock stars 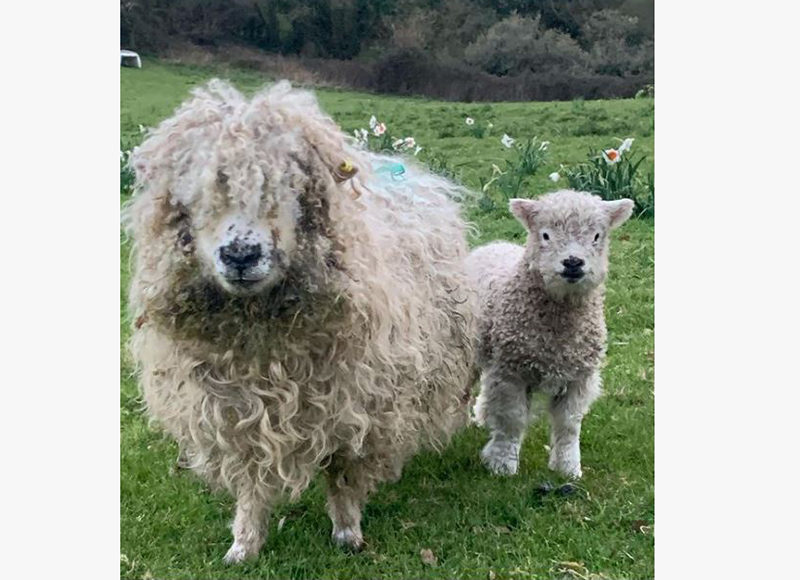 Hope was an orphan lamb who we spent lots of time with two years ago to nurture to full health and maturity. Now she’s a mummy herself to Cherry, who is very bonny. This photo makes my heart burst with pride. 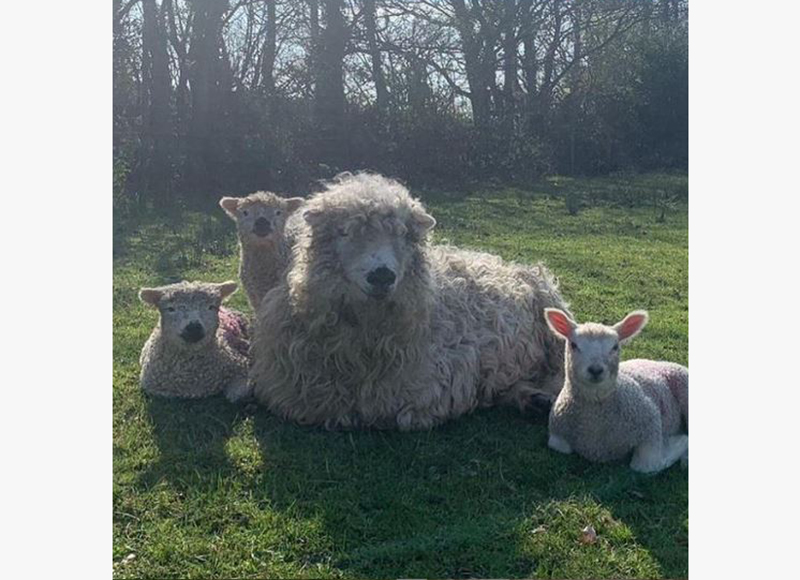 Not only does she have her own twins to feed, she has also taken Tulip under her wing. Spot the three lambs. 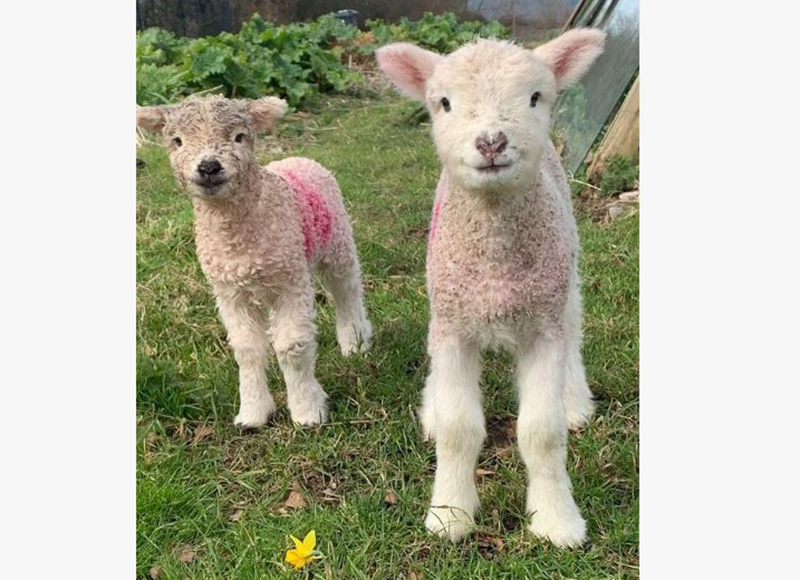 These lambs are best friends and have such fun skipping around the paddocks together. 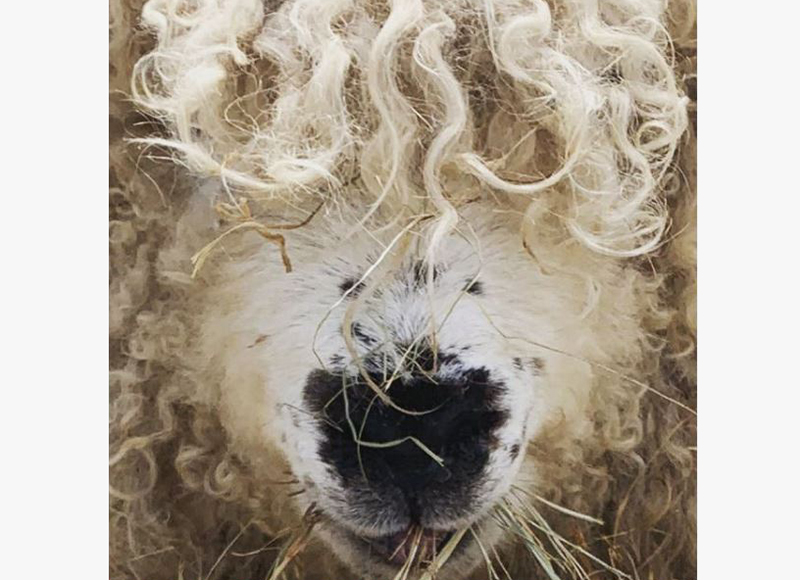 Our ram has good strong legs, a deep chest, lovely nature and fantastic teeth. Everything you’d want in a man, really.