Our favourite old-fashioned jellies, whips and nursery puds are back in fashion. The right accessories (mini-marshmallows, dolly mixtures) are key.

Soak and drain 3 gelatine leaves (for example Dr Oetker) according to the packet. Whiz 400g raspberries with 125g icing sugar in a liquidiser, then press the purée through a sieve. Gently heat 300ml double cream in a small pan until hot to the touch. Add the gelatine and stir until dissolved, then stir in the raspberry purée. Pour the mixture into a jelly mould (about 600ml capacity or similar – lightly brush with vegetable oil if not nonstick) or individual moulds. Cover and chill overnight. Just before serving, decorate with mini marshmallows, sprinkles and whipped cream, if wished.

In a blender, whiz 400g raspberries, 100g caster sugar and 200ml water. Add 50g extra thick double cream and whiz again, then press through a sieve into a large bowl. Soak and drain 4 gelatine leaves (for example Dr Oetker) according to the packet. Pour 3 tbsp boiling water over the soaked gelatine in a medium bowl and stir to dissolve, then slowly stir in the raspberry purée. Divide the mixture among 4 x 150ml glasses, cover and chill all day or overnight. Just before serving, spoon over a thin layer of bought custard and sprinkle with hundreds and thousands.

Have ready 60g golden syrup cake (for example McVitie’s). Prepare the finely grated zest of 1 orange. Drain 500g ricotta, place in a food processor with the zest and whiz until smooth. Transfer this to a large bowl. In another large bowl whisk 2 medium organic egg whites until stiff using an electric whisk, then gradually sprinkle over 100g light muscovado sugar (a third at a time), whisking well with each addition until smooth and glossy. In a medium bowl whisk 100ml double cream until it forms soft, fluffy peaks. Fold the whisked egg whites into the ricotta base in three goes, and then the cream, half at a time. Divide the crumbled cake into 6 x 150ml glasses and pile the whip on top. Cover and chill for at least 2 hours or overnight. Decorate with nibs of thinly sliced Crunchie Bar and Maltesers just before serving.

Soak and drain 3 gelatine leaves (for example Dr Oetker) according to the packet. Pour a few tablespoons of boiling water over the soaked gelatine in a medium bowl and stir to dissolve. In a large bowl combine 250g quark with 300g plain coconut yoghurt. Mix in 1 tsp vanilla bean paste and 3 tsp runny honey. Whisk half the yoghurt mixture a tablespoon at a time into the gelatine solution, then add this back to the rest of the yoghurt mixture and stir to blend. Divide the mixture among 4 x 150ml individual moulds. Cover and chill in the fridge for half a day or overnight until set. To serve, turn out the creams, drizzle 1 tbsp Malibu over each one, sprinkle with a little lime zest and shavings of dark chocolate.

Trifle in a glass with candied violets

Roughly crumble 2 trifle sponges and divide evenly among 6 serving glasses. Splash 1 tsp amaretto (or sherry or liqueur of choice) over each one. Press 150g good quality blueberry jam through a sieve into a bowl, then fold in 300g small blueberries and divide among the glasses. For the topping, in a large bowl whisk together 120ml sweet white wine, 2 tbsp brandy, the finely grated zest of 1 orange, 2 tbsp orange juice, 50g icing sugar and a generous squeeze of lemon. Slowly whisk in 300ml double cream in a thin stream, continuing to whisk until the mixture is light, fluffy and forms soft peaks. If wished, add a drop or two of violet essence. Divide the topping among the glasses, cover with clingfilm and chill overnight so that the topping firms up and the jammy juices soak in. Just before serving, decorate with candied violets and edible flowers, if wished.

Soak and drain 3 gelatine leaves (for example Dr Oetker) according to the packet. In a small pan, place 300ml double cream, 100g golden caster sugar and 4 broad strips lemon zest and bring to the boil, stirring until the sugar dissolves, then remove from the heat. Add the soaked gelatine to the pan and stir to dissolve, then stir in 150ml hot strong black coffee. Cover the surface with clingfilm and leave to infuse for at least an hour, or until completely cool. Discard the zest and divide the cream among 4 x 150ml jelly moulds. Sit these on a tray, cover and chill in the fridge overnight until set. To serve, turn out the crèmes, pour 1 tbsp Tia Maria over each one and decorate with a few chocolate coffee beans.

Preheat the oven to 200C/180C fan/gas 6. Butter and line a 30cm x 22cm traybake tin (or equivalent) with baking paper, and butter the paper as well. Separate 6 medium eggs. In a large bowl, whisk the egg whites until stiff. In another large bowl whisk the egg yolks with 250g golden caster sugar until smooth and combined and not thickened. Fold the whites into the yolk mixture in two or three goes, followed by 375g ground almonds and 1½ tsp baking powder (gluten-free, if wished). Spoon into the prepared tin, smooth the top and bake for 25-30 minutes until golden and shrinking from the sides and a skewer inserted at the centre comes out clean. Leave to cool in the tin then turn out and peel off the paper. Trim the sides and cut into 4cm squares (you should get about 24). For the icing, combine 225g icing sugar with 2-3 tbsp lemon juice (or enough so that the icing is thick enough to coat the fancies casually and just trickle over the edge). Dollop a little icing on each fancy, leave for a few minutes, then decorate each one with a single old-fashioned sweet (for example dolly mixtures, mini fruit jellies, mini allsorts, Smarties). Leave in a cool place to set for an hour.

From our store of comfort puds for grown-ups

1. Preheat the oven to 180C/160C fan/gas 4. Butter an ovenproof dish (for example a 30cm oval dish about 5cm deep or equivalent). Place the butter, sugar and lemon zest in the bowl of a food processor and cream together until light and fluffy. Incorporate the egg yolks one by one, and then the lemon juice and the flour. Gradually add the milk with the motor running. Transfer the mixture to a large bowl.
2. In another large bowl whisk the egg whites until stiff using a hand-held electric whisk, and fold or whisk them in two goes into the lemon mixture. Pour this into the dish and scatter over the marshmallows.
3. Bake for about 35 minutes or until golden and risen like a souffle on top, with a thick moussey custard beneath. Serve straightaway with the whipped cream.

Select a shallow ovenproof dish about 2 litre capacity (for example a 30cm oval gratin dish or equivalent). Preheat the oven to 200C/180C fan/gas 6.
Peel, quarter, core and slice the apples and arrange in the base of the baking dish.
For the sponge, place the flour, sugar, butter and orange zest in a food processor and reduce to crumbs. Incorporate the eggs and the milk. Smooth the sponge mixture on top of the apples.
For the sauce, place the sugar, butter, orange juice and salt in a small pan and bring to the boil. Pour this mixture over the sponge — the sauce will seem very liquid at this point, but during baking will transform into a rich butterscotch.
Bake the pudding for 30-35 minutes until golden on the surface and bubbling around the edges. Serve 5-10 minutes out of the oven, spooning the apples and goo at the bottom over the sponge. Serve with lashings of custard or cream. 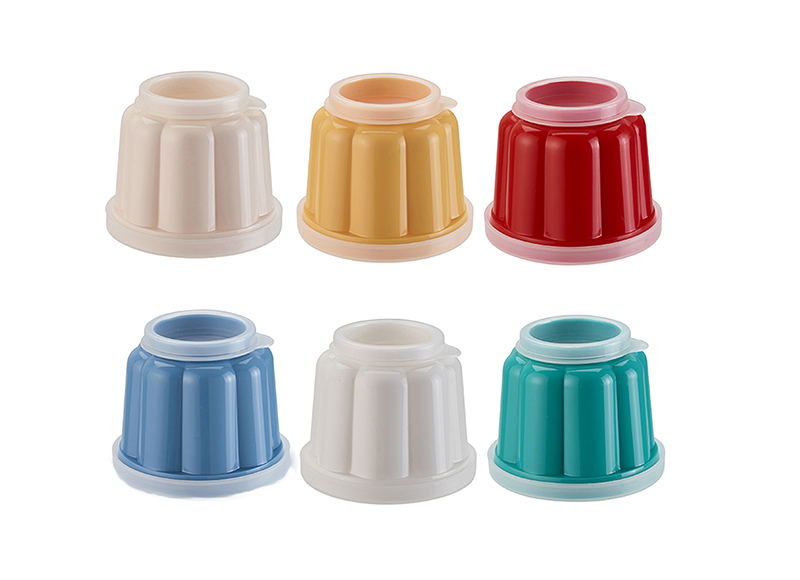 Get your puds party-ready with these neat mini jelly moulds, designed to make turning out super-easy. Set of 6, £7.49, lakeland.co.uk