Meghan may be the first actress to marry into the British monarchy, but she’s following in some very glamorous footsteps. It seems that royal sons can’t resist a showgirl…

Since former fashion buyer Kate Middleton wedded the heir to the throne, Britain seems to have made peace with the notion of ‘normal’ people marrying into royalty – after all, we have a fair few of them in the royal family. Prince Charles may have initially plumped for aristocrat Lady Diana Spencer, but his siblings have all chosen to marry non-blue-bloods: Princess Anne first with Captain Mark Phillips, then Commander Tim Lawrence; Prince Andrew with Sarah Ferguson, and Prince Edward with the solidly middle class Sophie Rhys-Jones.

But Meghan breaks with royal tradition even further: not only a ‘commoner’, an American and a divorcée, she is the first actress to marry into the House of Windsor. For Britain, another royal taboo has been broken. Elsewhere, however, the union of Hollywood glamour and regal lineage is nothing new. Here are the incredible fairy-tale marriages that warmed hearts – and raised eyebrows – across the continent. Meghan, consider yourself warned…

The romance: Grace may have been born a commoner, but she certainly enjoyed
a life of privilege, growing up in a wealthy Philadelphia family and becoming a successful Hollywood actress, starring in films including Rear Window, To Catch A Thief and High Society. But even with her blonde beauty and aristocratic demeanour, her romance with
Prince Rainier III, the Stowe-educated ruler of Monaco, came out of the blue. The pair met while Grace was in Europe for the Cannes Film Festival in May 1955 when they posed for photos at the Palace of Monaco for Paris Match magazine. After Grace, 25, returned Stateside, she and Rainier, 32, wrote to each other. In December that year, Rainier travelled to the US, ostensibly on official business, but made time to meet Grace’s family. After three days he proposed, and preparations for the Wedding of the Century began.

The wedding: On 4 April 1956, Grace set sail for Monaco on the ocean liner SS Constitution with her family, bridesmaids, poodle and more than 80 pieces of luggage in tow. Two weeks later she married Prince Rainier in a civil ceremony in the throne room of the palace in front of just 80 guests. The following day, 19 April, the couple said their vows amid the grandeur of St Nicholas Cathedral in an event watched by 30 million TV viewers around the world. Her dress was a confection of 25 yards of silk taffeta, antique rose-point lace and pearls, taking three dozen seamstresses six weeks to make, while a Juliet cap held her 90-yard veil in place. The 700 guests – who feasted on champagne, lobster and a six-tier wedding cake – included Aristotle Onassis, Cary Grant, Aga Khan III and Ava Gardner.

Happy ever after? The couple appeared to live in a state of serenity, with Grace always composed, as though she had been born for the role. They had three children, Princess Caroline, Prince Albert and Princess Stephanie, and Grace embraced her royal duties, focusing on cultivating the arts and charity work in Monaco. But according to Robert Lacey’s 1994 biography Grace, she and Rainier grew apart over the years: Grace regretted giving up acting (Rainier banned the showing of her films in Monaco) and he was jealous of her celebrity. She also suffered miscarriages, and is rumoured to have had a bad menopause and bouts of depression in later life. Tellingly, when asked if she was happy in a 1965 magazine interview, she replied: ‘I don’t expect to be happy, and I don’t look for happiness. So perhaps I am content in life, in a way.’ Her death in a car accident in 1982 at the age of 52 meant that she would always be remembered as the ultimate glamorous princess.

The romance: Born ‘Lillian’ to a market-stall-owner father and shop assistant mother, her childhood had ‘no joy…nothing’. At 16, having removed one ‘l’ from her name, Lilian moved to London, first working as a maid, then as a model and appearing in Vogue. She was offered minor film roles, where she met her first husband, actor Ivan Craig. Then, in 1943, she met Prince Bertil. There are varying accounts of their meeting. She either saw the regal naval attaché to the Swedish Embassy in London at a cocktail party for her 28th birthday, or at the nightclub Les Ambassadeurs, where she was a hostess (when she was told that he was a Swedish prince, she replied: ‘And I’m the Queen of Sheba!’). The attraction was immediate, and after her home was damaged in an air raid, Bertil took her in. She never left.

The wedding: Lilian and Ivan divorced after the war, but as she was a commoner, the Swedish constitution forbade Bertil from marrying her. In 1947 Bertil’s elder brother died in a plane crash, leaving his baby son Prince Carl Gustaf (the current king) heir to the throne. Suddenly, Bertil – as a potential regent – was of critical importance to the monarchy. So he chose duty over love and asked Lilian to wait to marry him, which she did – for 33 years. The pair lived quietly together in France and Stockholm, and, as the years passed, sacrificing having children. Finally, in 1976, the new King Carl Gustaf gave his uncle, 64, permission to marry Lilian, who was 61. They wed in the chapel at the royal palace of Drottningholm.

Happy ever after? As Her Royal Highness Princess Lilian of Sweden, Duchess of Halland, Lilian threw herself into her official duties, which she continued after Bertil’s death in 1997. And although she dedicated her life to Sweden, Lilian, who died age 97 in 2013, never forgot her humble origins: when Queen Elizabeth encouraged her to let her know the next time she was in London, Lilian couldn’t bring herself to do it. 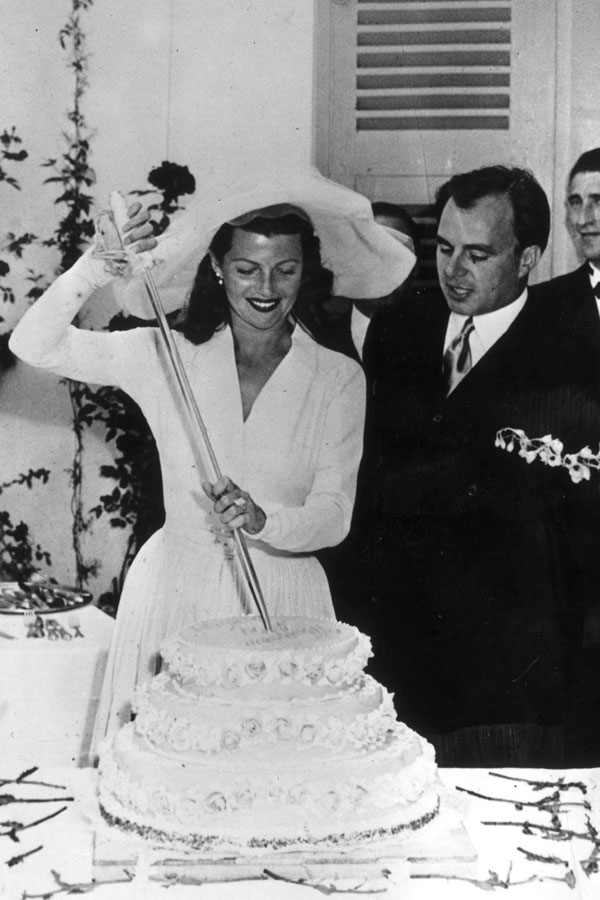 The romance: Born Margarita Cansino in Brooklyn in 1918, Rita became one of Hollywood’s most desirable film stars. But despite her glamour and fame, her modest roots were in stark contrast to those of Prince Aly Khan, the fast-living playboy son of His Royal Highness Aga Khan III, a fabulously rich spiritual leader to more than 15 million Ismaili Muslims. After watching her 1946 hit film Gilda, Aly became infatuated with Rita, who, by 1948, was single after the collapse of her marriage to Orson Welles. According to historian Anne Edwards, author of Throne of Gold, when Aly heard that Rita was on the Riviera, he asked a mutual friend to introduce them at a lavish party. It seems to have been lust – if not love – at first sight, as Rita, then 29, stayed the night with 36-year-old Aly at his opulent home, Château de l’Horizon. Later, when she returned to Hollywood, he followed her and rented a mansion across the road. They became inseparable, and soon Rita was pregnant.

The wedding: The Aga Khan gave reluctant permission for his feckless son to wed and on
27 May 1949 Rita married Aly in a town hall ceremony, followed by an opulent reception at Château de l’Horizon. It was her third marriage so she wore a pale blue dress with matching hat from Christian Dior’s New Look collection. More than 500 guests consumed 600 bottles of champagne and 50lb of caviar, says Edwards. The pool was scented with 200 gallons of eau de cologne, in which floated two huge floral pieces in the shape of an ‘M’ and ‘A’, while Ismailis queued up to kiss Rita’s feet.

Happy ever after? Rita gave birth to Princess Yasmin seven months later, but by 1950 Rita was fed up with Aly’s philandering – as well as the demands of her role. During a three-month tour of the Aga Khan’s followers in Africa, Rita threw royal duty to the wind and flew back to the US, moving to Nevada to establish legal residence and qualify for a divorce. In September 1951 she filed on grounds of ‘extreme cruelty, entirely mental in nature’. The pair fought a bitter custody battle over their daughter: Aly wanted her to be raised Muslim; Rita insisted she should be a Christian and rejected his offer of $1 million if she promised to raise Yasmin in his faith. In January 1953, the divorce was granted. Aly died in a car crash seven years later and Rita went on to marry twice more, and battle alcoholism and Alzheimer’s. She could never find a man who really loved her; instead she lived in the shadow of her most famous role: ‘Men fall in love with Gilda,’ she said, ‘and wake up with me.’

When regular girls (and guys) live the fairy tale.

Mette-Marit Tjessem Hoiby met Prince Haakon, both now 44, the heir to the throne of Norway, at a music festival. Stories emerged about her years on the Oslo rave scene, and the father of her son (now 21) was convicted of drug-related offences. But she and Prince Haakon defied convention to marry, and after 17 years are still smitten.

Australian ad executive Mary Donaldson, 46, met Crown Prince Frederik of Denmark at a pub in Sydney during the 2000 Olympics. Mary moved to Denmark and the pair married in 2004. Four children later, the couple are as strong as ever.

South African Olympic swimmer Charlene Wittstock met Prince Albert of Monaco at a Monte Carlo swimming competition. Eleven years later they married, amid rumours that Charlene attempted to flee before the big day. Today they are doting parents of twins and Charlene is fluent in French – as well as court protocol.

The embarrassing dad:  Queen Maxima of the Netherlands

The wedding of Prince Willem-Alexander to Argentinian banker Maxima Zorreguieta Cerruti was debated in Dutch parliament over her politician father’s role in the Argentine dictatorship. Maxima’s father was barred from attending her 2002 wedding and her inauguration as queen in 2013.

Gym owner Daniel Westling had to work hard to gain acceptance after he met the heir to the throne, Crown Princess Victoria of Sweden, during a workout in 2002. King Carl Gustaf was initially against the match, but thanks to a committee of courtiers, Daniel has been groomed to become the perfect royal.

The king and queen of Spain were horrified when their son Prince Felipe fell in love with TV anchor Letizia Ortiz Rocasolano. But their 2004 wedding was watched by 25 million, and when King Juan Carlos abdicated ten years later, Letizia became the first commoner to be queen of Spain.

She may appear to be the perfect royal, but that wasn’t always the case. The wife of Prince Carl Philip (Princess Victoria’s brother) is a former bikini model and reality-show contestant, with a belly-button piercing and tattoo. But the Swedish royal family accepted her, and she has joked about how ‘princess school’ made her fit for her new role.