Holly Tucker, the creative mastermind behind the juggernaut website Not On The High Street, tells Julia Llewellyn Smith how overcoming her own tough times has turned her into a guru for small businesses – and a much-needed lifeline right now.

By the time Holly Tucker was 25, she’d experienced more highs and lows than most of us might expect in a lifetime: a successful career, serious illness and a divorce.

Having started work in advertising straight from school, by 20 she was the youngest account manager in London with clients including giants such as L’Oréal, and at 22 she married her childhood sweetheart. ‘My nickname has always been Hurricane Holly,’ she says. ‘I liked to do everything in a hurry.’

But just one year later, aged 23, Holly was forced to dramatically slow down after learning she had an inoperable brain tumour. This led to her having to quit her job, while simultaneously her marriage broke down.

‘Everything in my world was collapsing,’ says Holly, now 43. ‘I couldn’t hold down a full-time job, and my divorce – from the only love I’d ever had – was incredibly messy and painful.’

Yet these darkest of times gave Holly the impetus to become the ultra-successful entrepreneur she is today. To distract herself from her pain, she started making wreaths out of vegetables. ‘I was going through so much, the creativity was healing for me.’

Struggling to find venues to sell her creations, Holly decided to organise a fair for small businesses in Chiswick, West London. ‘I only did it so I could bag the best trestle table and sell my stuff,’ she laughs. More than 100 businesses signed up, so Holly began organising more and more fairs.

By this time doctors had given her the all-clear (‘The tumour’s still there but, touch wood, it’s behaving itself’) and she’d fallen in love with Frank Symington, a Scotland Yard detective working in counter-terrorism, whom she’d known since she was 18.

‘I used to call Frank an angel from above,’ says Holly. ‘He saved me, he gave me the strength to understand that my life wasn’t over – it probably hadn’t even begun – and the confidence I needed to become an entrepreneur.’ In 2005, the couple had their son, Harry.

While organising fairs, Holly became frustrated at how their success was dependent on good weather. ‘They were always being rained off, but on the internet there’s no rain – and you can be open 24 hours a day,’ she says.

So, with her friend Sophie Cornish, in 2006 Holly launched Not On The High Street – a website where small businesses can sell their products. At that time, it was the only online marketplace in the world apart from Amazon and Ebay.

Within a decade the pair, who have been awarded MBEs for their achievements, were running a multimillion-pound enterprise, employing more than 200 people, with around 200 of the tens of thousands of small businesses signed up hitting an annual turnover of £1 million.

One of those is Modo Creative, founded by husband and wife Andrew and Emma Tucker (no relation to Holly). Thirteen years ago, they had recently relocated to Yorkshire from London after Emma had been made redundant and was pregnant with their first child. Andrew found himself sleeping on the floor of his office in Brighton, commuting home at weekends. Desperate for pin money, they approached Not On The High Street – then in its infancy – about their idea of making personalised, handcrafted signs and gifts.

‘I remember saying to Andrew, “If it brought in £5,000 a year that would help,”’ says Emma. ‘We didn’t really think it was possible and we felt like country bumpkins coming down to London to the Not On The High Street offices. But right from the start Holly made us feel that we should be there and pulled us along.’ Within a year, their business was bringing in enough for Andrew to quit his job as a graphic designer. Today its annual turnover is over £1 million, the couple employ ten people and their products sell everywhere from John Lewis to Next as well as in their own shop in Haworth, West Yorkshire.

‘We definitely owe a lot of our success to Holly’s creative input. We’ve always said she’s like the mum of small businesses. If you ever have a problem you can just go to her and she’ll sort it out,’ says Emma.

No wonder, then, that when lockdown was imposed at the end of March, thousands of anguished small business owners – terrified that the enterprises they’d spent years setting up would be destroyed, but also worried that it was inappropriate to be selling things at a time of international crisis – turned to Holly for advice and reassurance. Equally shocked and concerned, Holly – who three years ago left Not On The High Street (she’s still on the board) to set up her own small business consultancy, Holly & Co – rose magnificently to the challenge, and in March launched SME:SOS, a free resource to support small businesses through these frightening times.

Every day throughout lockdown, business owners have turned to Holly’s website for her daily bulletin videos packed with advice and encouragement, as well as watching her inspirational interviews with entrepreneurs such as fitness trainer Joe Wicks and experts such as the Chief Secretary to the Treasury Stephen Barclay. ‘Videos are not my comfort zone – I’d never done one before – but I felt people needed me,’ says Holly. ‘I said to them, “You cannot give up. We’re already going against the tide with the worst recession since 1706 heading our way, but if we don’t soldier away all our dreams will be ashes.”’

Now Holly receives five to ten handwritten letters every day from grateful viewers. ‘They say my mentorship has been their one anchor, that it has truly helped them at a time when they could have felt very alone. At the beginning of lockdown, everyone was very broken and scared. Now the mood has completely changed and everyone seems much more gung-ho.’

Holly encouraged businesses to use this downtime – however unwelcome – as an opportunity to work out how to adjust going forward. ‘I’m really emphasising that this is an amazing opportunity to spring clean your business and life,’ she says.

Holly had first-hand experience of the reassessments she’s now advocating when she began to find life overwhelming as co-chair and CEO of Not On The High Street. ‘I was in back-to-back meetings from 8am to 7pm, five days a week. I was under so much pressure I never felt I could walk to the loo, I had to run – and my PA would run after me. I saw my son for 20 minutes every night – I was turning into a “she-man” and that wasn’t the real me.’

When she founded Holly & Co in 2017, she got rid of all her uncomfy office shoes. ‘I haven’t worn heels since!’ she says. She replaced them with colourful and sparkly trainers. ‘They represented everything I wanted to do with the business landscape, which needed the biggest facelift ever. Its image since God-knows-when had been that of grey-haired men in suits, which was so dreary when in fact running your own business can allow you to be so fulfilled – where you can be happy, drop your kids off at school and still make money.’

Holly’s been supported throughout by Frank, 59, who, as Not On The High Street took off, took early retirement to bring up Harry. ‘Being a stay-at-home dad took some getting used to for him, but now we’re there,’ says Holly.

The three live in a Victorian house in St Margaret’s, Southwest London, which Holly has crammed with treasures bought from the hundreds of entrepreneurs she’s worked with – including sculptures of unicorn heads, a life-size fibreglass pig and a shelf carved from a single piece of 100-year-old tropical wood.

‘My house is like a living, breathing, pulsing shrine to small businesses,’ Holly laughs. ‘Decorating it has been like my therapy. I’ve turned it into my creative centre.’

And thank goodness, she adds laughing, since one way she’s reinventing Holly & Co post-lockdown is by permanently shutting the offices, with all staff in future working from home and being offered a financial grant to pursue their personal passions in the time they would have spent commuting. ‘I’ll be at home all the time,’ she chuckles. ‘Poor Frank.’

Yet Frank clearly enjoys having Holly around, given how he surprised her on her birthday in the early days of lockdown with a marriage proposal in front of Holly’s parents, sister and niece who were watching on Zoom.

‘We popped our first of many bottles of champagne, then Frank asked Harry if he’d be his best man and Harry cried, because he’d wanted this since the moment he could speak.’

They’re planning a small wedding at home for some point next year. ‘I’ve never been the bridezilla type, but lockdown has made you realise friends or family in your garden is one of the nicest things you can have,’ says Holly.

Meanwhile, she and Frank are just trying to enjoy the unexpected blessings of the current crisis. ‘We’ve weathered a lot of storms and now we get to stay still and say, “Well done us, we’ve actually done good.”’ 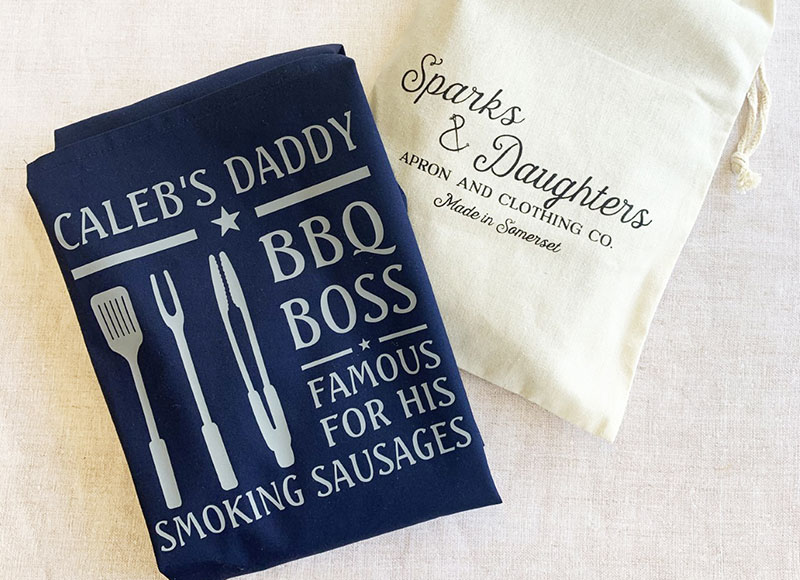 Founded by mother and daughter Deborah and Verity Sparks, this brand sells personalised aprons that they started making in their Somerset kitchens. Sparks & Daughters is now one of Not On The High Street’s £1 million sellers, with a studio and a small team of employees. ‘I’ve coached and cheer-led Deborah and Verity for more than 11 years,’ says Holly.

Holly first spotted Alice Rivers-Cripps’s necklace engraved with family names in a tiny shop in Brighton. She persuaded Alice to join Not On The High Street, where it also became one of its £1 million sellers. Today Alice has three shops, runs the largest jewellery workshop in the South of England and employs a team of 50 women. ‘The necklace has been one of Not On The High Street’s top-selling products for more than a decade,’ says Holly. 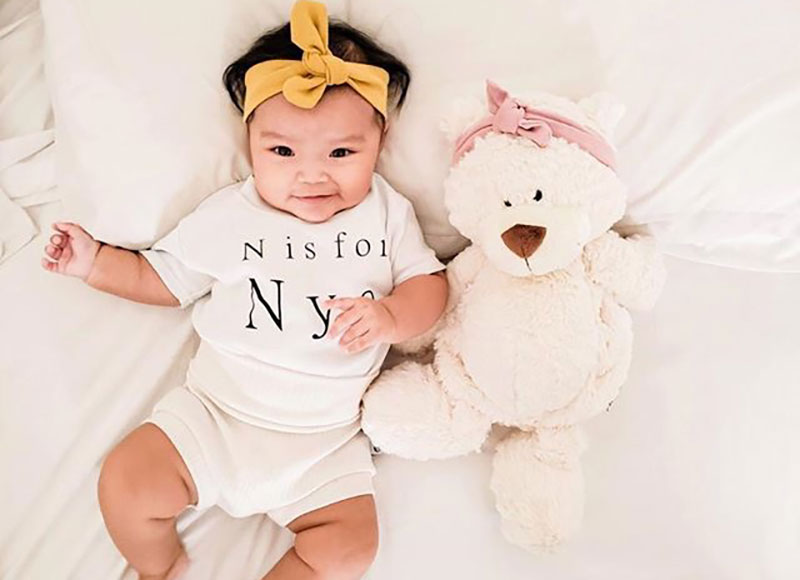 Founded three years ago by Swedish-born Nanna Osei Kwaku, Jerry & Jo employs British-based mothers as seamstresses to make high-quality children’s clothes. ‘I’ve championed Nanna from day one, supporting her ideas, encouraging her when she was not sure whether to continue,’ says Holly. ‘Today her brand is going from strength to strength and she’s just had her fourth child – I couldn’t be prouder.’ 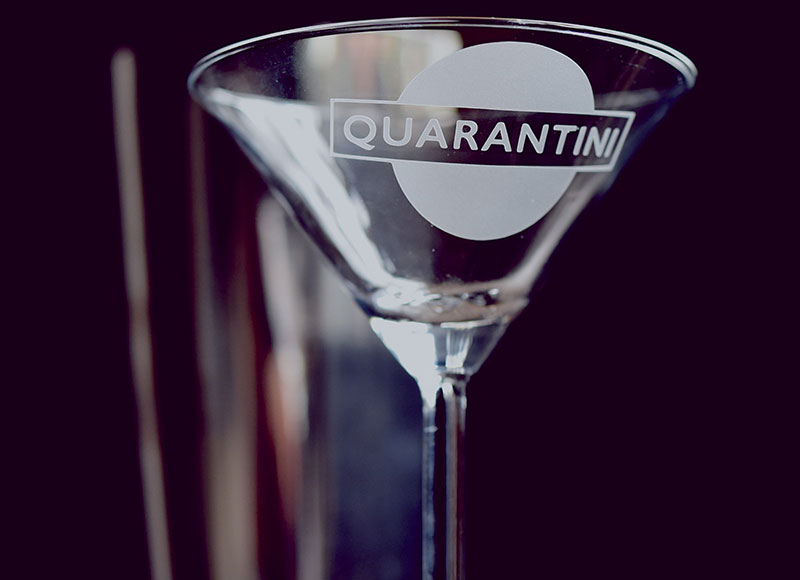 Having quit his job in advertising because ‘it began to make me unwell’, eight years ago Andy Poplar set up Vinegar & Brown Paper in his garden shed in Otley, West Yorkshire, etching vintage glassware such as test tubes with messages. Andy’s many celebrity customers include designer Sir Paul Smith, while his products have been stocked in Liberty London and in boutiques internationally. ‘Andy and I have collaborated and spoken weekly and his exclusive Quarantini glass we created together has gone on to be the sellout souvenir of lockdown,’ says Holly.

For more on Holly go to @hollytucker on Instagram.