For more than 30 years interior designer Kelly Hoppen has been a constant support to her stepdaughter, fashion designer Savannah Miller – and the pair are still inseparable.

Kelly Hoppen MBE, 60, is an interior designer with clients that include the Beckhams, Elton John and Disney. She has appeared in TV shows such as Dragons’ Den and The Great Interior Design Challenge.

I am not Savannah’s mother, so the expectation is that I’m the wicked stepmother and we don’t get on. But that couldn’t be further from the truth. She and her (actress) sister Sienna are and will always remain two of the most precious people in my life – even though I have been divorced from their father Edwin for 17 years. She calls me Mama K and I call her Sasa. She and Sienna always send me cards and flowers on Mother’s Day, which really touches my heart. 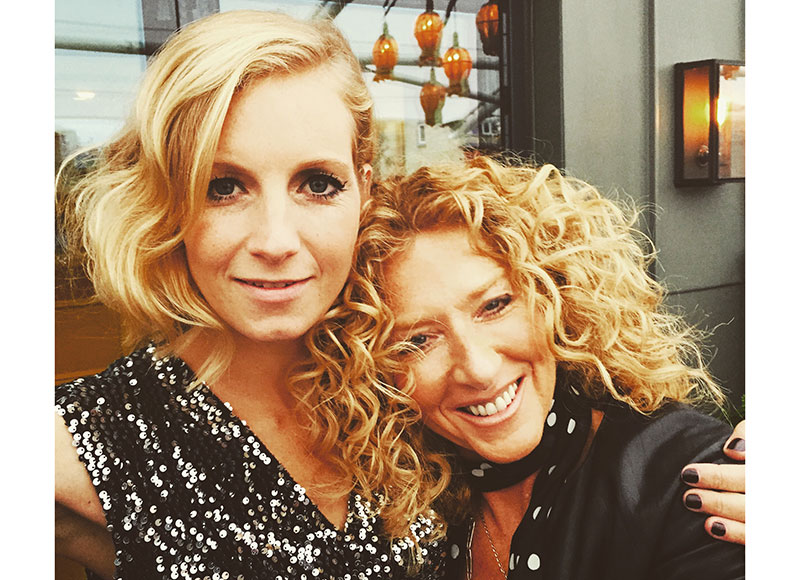 Life and relationships are what you make them. It made me laugh to see Savannah and Sienna once described as my ‘former stepchildren’. I thought, ‘If only people knew how much we are part of each other’s lives.’ They both know I will always be there for them as I am for my own daughter Natasha. That goes for all of us – when Natasha got married, it was Edwin who walked her down the aisle.

I was 28 when I met Edwin. He’d been divorced from his former wife Jo for quite a few years and she was, at the time, very unwell with breast cancer. He was looking after their two little daughters and I remember very clearly the first time I met them at Pizza Express in London’s Fulham Road. I took Natasha along and we all sat at a table – Edwin, myself and these three little blonde girls who got on straight away.

Savannah is four years older than Natasha and three years older than Sienna. She was a lovely, easy-going little girl. There was something earthbound about her and I quickly realised how creative she was, always wanting to sew or make something. Savannah had a real spirit and was the leader of the pack.

Although their mother was very unwell, the girls were luckily too young to realise how sick she was and it became my mission to create a good, nurturing space for all of us, including Jo. Despite this, perhaps out of loyalty to her, I was ostracised by other mums at the school gates. We were expected to be enemies but we all understood from the outset that we wanted to put our girls first and support each other. We spent Christmases and holidays together. All of us were determined to make our situation work. It wasn’t terribly hard, it was just hectic. Thankfully Jo survived her cancer and remains one of my dearest friends and an incredibly important woman in my daughter’s life, so I remain as grateful to her as she does to me.

The truth is that all of them filled a void in my life. I was working full time with my interior design business when Edwin and the girls came along but, together with Natasha, they always took priority. I had always wanted a big, busy family and now I had it. Natasha adored Edwin and she and the girls were like proper sisters – they fought, they rowed, they loved like sisters. I would dress them in identical Gap leggings, which Savannah hated. Later they’d pinch clothes from my wardrobe. They still do. I remember happy holidays in Thailand, singing along to Lisa Stansfield in my Cherokee Jeep which they nicknamed the BFG. And I think of Savannah running barefoot through grass with flowers in her hair – she was that sort of girl.

Being a stepmother gives you a little bit of distance, which can be helpful. Savannah went to Edinburgh University to study religion but hated it. Her parents wanted her to stick it out so she asked me to talk to them because she wanted to work in fashion. I knew that was her path – she was always so stylish and obsessed with clothes. I introduced her to contacts of mine and she secured a summer placement at Central St Martins (the prestigious London fashion school). We got together with Jo and Edwin and Savannah worked hard to get on the course.

She talks to me a lot about being a woman in business. I’m so incredibly proud of her and to think I’ve had a part in her life. She’s an amazing mother – she’s still this earth woman who cooks and grows her own vegetables. I relish the times we spend together and still go on holidays with the girls and Natasha. Of all the things I’ve achieved, my mother was proudest of the way I handled being a stepmother. Jo has often thanked me for ‘looking after my girls’ and I feel so blessed to have all of them in my life.

Savannah Miller, 41, worked with Alexander McQueen and Matthew Williamson before launching her own fashion collection Nine, a bridal line, and Twenty8Twelve with sister Sienna.

It started with food. My dad’s fridge began filling up with these delicious dishes of things like macaroni cheese. They’d come from his girlfriend Kelly and me and my sister pestered him to meet her. When I saw her in Pizza Express I was thrilled. I thought she was the most glamorous woman I’d ever seen and she was so lovely to us. Natasha was an even bigger bonus.

I don’t think Kelly will ever realise what an impact she had on my life. I was at boarding school so when I’d see her at weekends and in holidays we’d always be talking and even though I was nine or ten years old, I thought of her as my friend, which sounds ridiculous now. She never tried to mother me or step on my mother’s turf but she would always be there to listen to anything I had to say.

In a lot of respects she was like my mum – a force of nature. Kelly had this way of making us think and talk. Her philosophy is to always use positive language. If you said, ‘This is awful,’ she would reply, ‘Well, let’s look at it from another perspective.’ You will never hear her say, ‘You can’t.’ That has been so useful for me as a woman and as director of my own business.

Kelly was building her incredibly successful business and I saw that there was no distinction between being a mother and having a career. She was brilliant at both. Kelly has so much energy; she’s always busy but she also always has time. The other day I was feeling a bit overwhelmed and I called her. She was on a shoot but said, ‘Come over’. We had a chat and I left feeling so much better and also knowing that I had this woman who always has my back.

She encouraged me to follow my dreams. At the age of nine I used pencils to knit with. She’d give me bits of fabric and was always positive about anything I made. When I was at university I knew I wasn’t in the right place. I called Kelly and we met at Joe’s Brasserie.
I told her I wanted to be a designer. By chance, Joe Ettedgui, a friend of Kelly’s who owned the fashion shop Joseph, walked in. He told me what I needed to do, where to go and how hard I needed to work. I don’t even have an art GCSE but I worked anywhere and everywhere I could, pushing and pushing until they accepted me at Central St Martins. Every morning I would be standing at the door waiting for it to be unlocked. After the day was over I’d rush to Alexander McQueen’s where I was doing extra work. I never stopped. I knew how hard Kelly worked and I followed that example.

As designers we are very different. She’s all Zen and neutrals and I’m all colour and eclectic bohemian, but as women we share many similarities. My three children, who call her Granny Kelly, adore her. I am a product of my amazing mother and in many ways a product of Kelly’s gentle, careful mentoring. We were so fortunate my dad met this woman. And even when they got divorced it didn’t change our relationship. We will always be family.

Savannah and Kelly in four

Kelly: Not responding fast enough to texts and emails.

Savannah: She doesn’t have any.

Kelly: We hug and hug then talk and talk.

Your favourite memory of each other?

Kelly: Running along a beach as a child in Krabi island, Thailand, laughing with her blonde hair streaming in the wind.

Savannah: Her laughter. A holiday in Ibiza when my second baby was six weeks old, sitting outside with Kelly who was just laughing and laughing. That thought never fails to make me feel happy.

For more on Kelly and Savannah, go to kellyhoppeninteriors.com and savannahmiller.com.

As told to Louise Gannon.

Editor’s letter: How to be famous… and stay sane

Lorraine’s make-up artist just revealed some of the secrets to her...

HOW TO: Set the scene with an Easter tablescape

How to get over your ex, according to science

Princess Margaret’s jewellery: Diamonds, pearls and the Princess who dazzled the...

Shoppers are praising this £9 eye cream for soothing their eczema

How to really make an entrance: Front door ideas to set...

Everyone on Instagram is wearing this super-chic knit dress