Megan Underwood had suffered from eczema since she was two. Over the years, she tried countless remedies and diet changes, but the condition eventually became so severe that it covered her entire face and body, and even led to hospital treatment.

‘My skin was red raw. It was also swollen because of water retention under my skin,’ the now 23-year-old, who works as a teacher, recalls. ‘A lot of people were really rude to me. They didn’t want to take money from my hands, and asked me if I was contagious.’

‘I spent thousands on different creams and treatments. I tried a meat-free diet, a dairy-free diet, a grain-free diet, I have bathed in oats. Nothing has ever worked for me before.’

Then Meghan heard about MooGoo, a natural skincare range which was originally created for use on cows udders, but has now been formulated for humans. She emailed the customer services team with pictures of her sore, irritated skin, asking if they thought their products could help – and the transformation was astounding.

‘I started using the Skin Milk Udder Cream, the Scalp Cream and the Irritable Skin Balm and suddenly my skin changed,’ she said. ‘I didn’t want to get too carried away because things had worked for me before and my eczema had always come back, but after using MooGoo it was an “oh my gosh” moment.’ 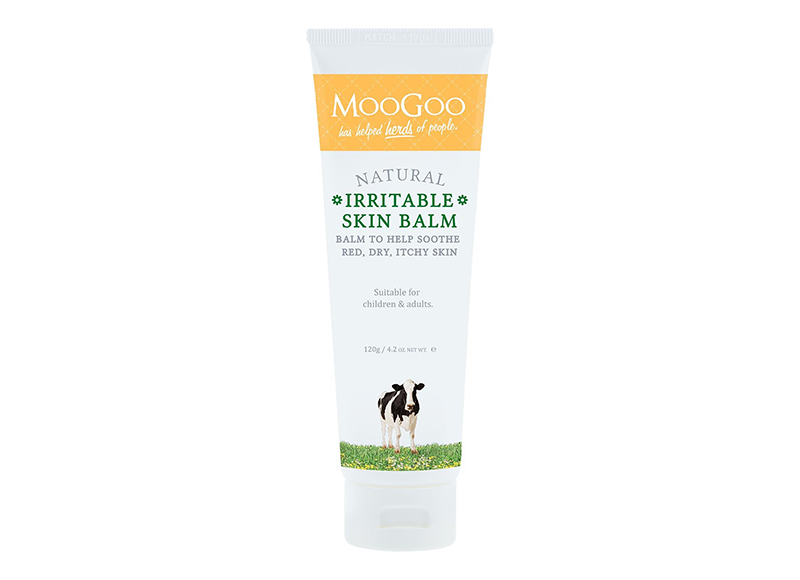 ‘My eczema started to clear up and then it was gone. I couldn’t believe it. The products have changed my life.’

Through her studies, Eleanor came across a case of psoriasis that had been treated with MooGoo, and decided to give the products a go herself. ‘I had nothing really left to lose but I had little hope that it would work,’ she admits. ‘I was struggling with self consciousness and didn’t go out with my friends socialising as it was so bad.’

But within months of using the cream every morning and night, the psoriasis which had plagued her began to clear up.

MooGoo’s Irritable Skin Balm, £12.50, has helped thousands of people with skin conditions to keep their symptoms under control. As the brand’s founder Craig Jones explains: ‘Our eczema and psoriasis creams work by using natural oils to improve the skin barrier function combined with natural anti-inflammatory ingredients. Although there is no miracle cure for eczema and its related allergies, it has worked for many people and spread via word of mouth.’

However, even if you don’t have eczema or psoriasis, the range’s rich, moisturising ingredients make it a great all-rounder for any area of your body that needs a little extra TLC.

‘Now I am happy to go makeup free once again which is something I never thought would happen,’ says Eleanor. ‘I still have a couple of bits on my cheeks but I’m fine with that now. I can’t thank MooGoo enough for giving me my life back.’

MooGoo products are available online, from independent pharmacies and in Whole Foods Market.

16 of the best overnight masks and skincare products that work...

11 brilliant products to buy in the Debenhams huge beauty sale

Millions of women are brushing their hair wrong and you could...

The Liberty beauty advent calendar for 2020 is back in stock...

Caffeine shampoo: How it works and 5 of the best to...