The Voice winner Molly Hocking likely blew you away with her singing back when she appeared on the show in 2019. The incredible vocalist has already released two hits; ‘After The Night Before,’ and her own version of ’I’ll Never Love Again,’ the memorable track performed by Lady Gaga at the end of A Star Is Born.

And now, the singer has released her latest single, announcing the news on Instagram.

‘WE CAN HAVE THE WORLD TONIGHT is out NOW on all streaming platforms, we’ve entered the iTunes chart after 6 hours! Downloaded it, share it, tell ya friends, tell ya grannies, tag me while you’re listening to it. Lots more to come! Love you all,’ she wrote, alongside a snap of her wearing a vibrant pink ensemble. The star had previously been teasing her single via Instagram for several weeks.

Now with other 30 thousand Instagram fans and a new single under her belt, Molly is enjoying the success she deserves. However, after having struggled with her mental health for some time now, it’s not always been smooth sailing.

YOU spoke to the singer and her Mum Sarah back in January, where they explained what a journey it had been since Molly had won the show. 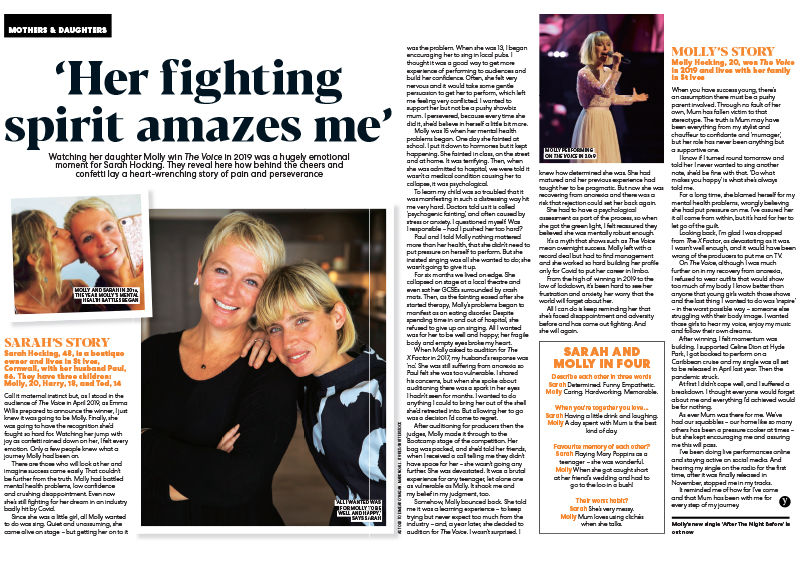 ‘After winning, I felt momentum was building,’ she started. ‘I supported Celine Dion at Hyde Park, I got booked to perform on a Caribbean cruise and my single was all set to be released in April last year. Then the pandemic struck.’

‘At first I didn’t cope well, and I suffered a breakdown. I thought everyone would forget about me and everything I’d achieved would be for nothing.’

However, things started to pick up, leading Molly Hocking to where she is today: ‘I’ve been doing live performances online and staying active on social media. And hearing my single on the radio for the first time, after it was finally released in November, stopped me in my tracks.’

Stream ‘We Can Have The World Tonight’ now on Spotify.