Keeping white clothes white is an eternal struggle. No matter how many labels you read or products you use, the gradual onset of greyness – not to mention the addition of the odd accidental stain – seems inevitable. But now a new cleaning hack has emerged which might just be able to restore your favourite white items to their former glory.

‘I seen a tip on mrs Hinch page about Milton sterilizer fluid, (Mrs H hasn’t done this I tried it after seeing on a fan page it takes stains out ?) knowing I had some sitting though ah I’ll give it a bash cos this one top is very discolored no gonna loose anything!!’ she explained in the accompanying caption.

‘Well this is the result!!! I’m about to go do all her shirts and white tops now ?? maybe even do Zaks while I’m at it!! Pretty impressed with this! Although it hasn’t taken the permanent marker off it’ll be fine under a dress.’ 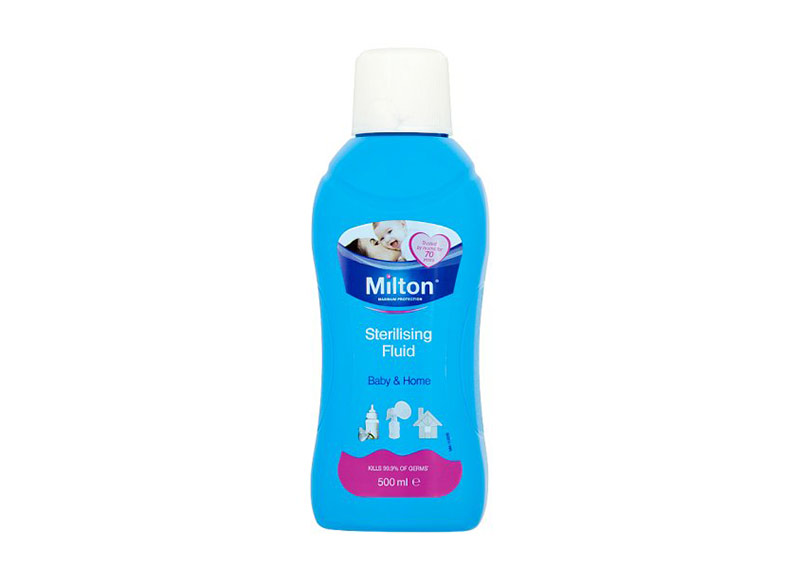 Ashley’s post quickly gained more than 16k shares and dozens of comments from people asking how she’d achieved such amazing results, to which she responded: ‘1 part Milton 3 part water in a large mixing bowl with boiling water soak for 2hrs then wash on a white wash ? Happy whitening.’

Milton Sterilising Fluid, which retails for around £2 for 500ml in most leading supermarkets, is essentially a disinfectant which can be used all around the home, but is often used to sterilise breastfeeding equipment and baby feeding utensils. However, as hundreds of social media cleaning enthusiasts have now discovered, it can also be sued to lighten your laundry load – literally.

‘I do this with my shower curtain too. It’s amazing,’ one commented, while another said: ‘Oh wow will need to try this’.

‘I’ve thrown out loads of girls school shirts for being like this…,’ a third admitted. ‘Might have to try this in future!’