The Covid-19 pandemic drastically changed most aspects of our lives, with several lasting changes, including the way we work. The number of WFH workers to more than doubled after the government first instructed people to work from home in March 2020, and while many people have now returned to the office at least some of the time, it’s still a huge shift from the pre-pandemic norm.

This had numerous effects on all of us, from eliminating water cooler chat to allowing us to wear pyjamas to work. But how did it effect those going through the menopause? Recent research found that more than one million women in the UK could quit their jobs in 2022 due to lack of menopause-related support at work. Of course, many women have jobs where there is no option to work from home, but could this be a solution for those that do? 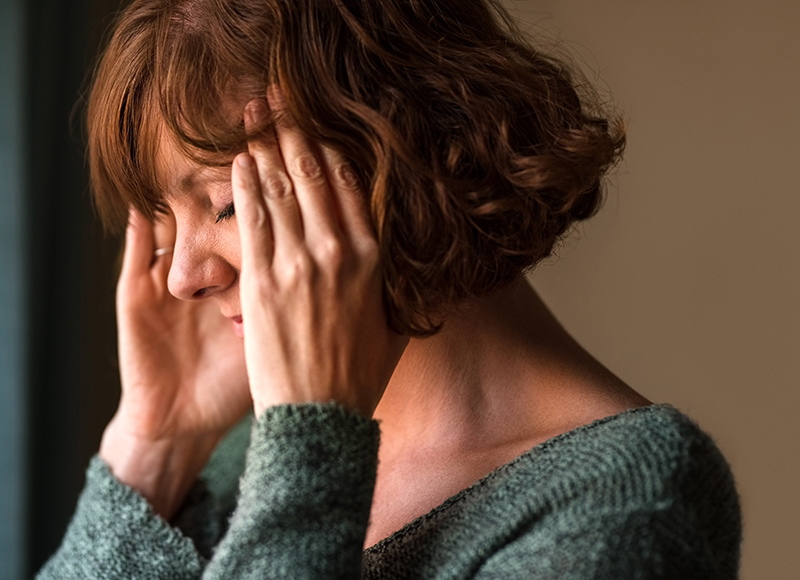 Debi Wallbank, 48, from Shropshire, certainly thinks so. She lost two senior management positions in fairly quick succession due to menopausal symptoms rendering her unable to perform her job, although she was unaware what was causing these symptoms at the time.

‘Menopause had such a huge impact on my mental capacity, I struggled to organise, prioritise and remember to do things – all essential for my line of work,’ said Debi. ‘I subsequently lost that job, all the while thinking it was simply depression causing it all.’

When she was offered a more senior role at another company, she thought the extra challenges would be the solution to keeping her focused and stimulated, but it had the opposite effect.

‘I would joke about it being menopause brain and make light of it, but… I was frustrated I couldn’t do tasks I’d previously found so simple. I was forgetting things all the time. I was fatigued to the point of being incapable to get to work on time.’

After being signed off work for three months, that company also eventually let her go. ‘I felt utter shame and embarrassment, not to mention complete failure as a human being.’

Once Debi was eventually diagnosed and on a course of HRT, she started her own coaching businesses, Menopausitivity and The Heart Core Warriors, where she can work from home.

‘From a mental [health] point of view, [working from home] has made such a difference. I can’t even find the words, to be honest, because it has literally eliminated so much stress.

‘I can work when I want to work and I don’t have to think about my hair being perfect, wearing a smart outfit and smiling at everybody all day, which is the last thing you want to do when you’re in the throes of menopause.’

Debi says the freedom to wear whatever clothing is most comfortable – ‘I can now do my job in pyjamas or loungewear if I want to’ -, the knowledge that it’s ok if she doesn’t feel able to be around other people and the ability to work to her own timetable are huge benefits to working from home during the menopause. 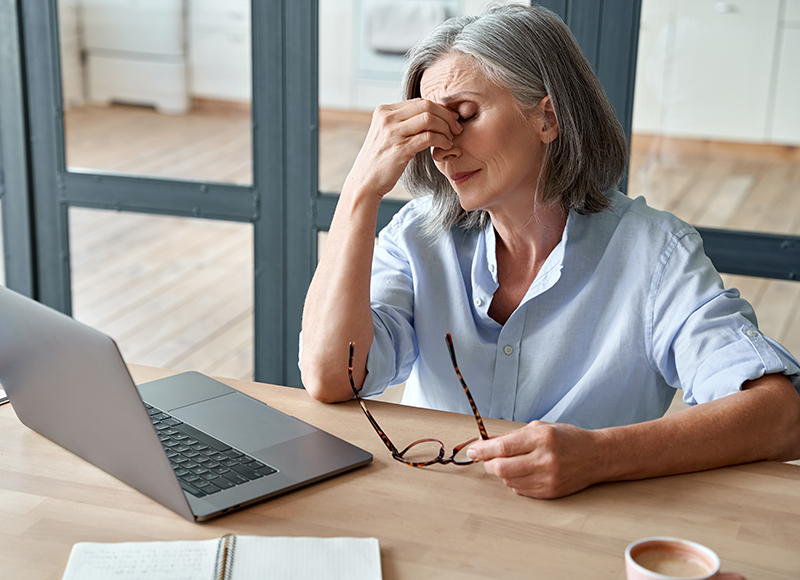 ‘I found it pretty difficult experiencing my perimenopause symptoms whilst still working in an office environment,’ Dr. Brophy tells me. ‘I found having hot flushes very embarrassing at work and would make excuses to leave meetings to go to the bathroom to cool down and dry off my hair and clothes as I would perspire a lot.

‘I had unpredictable migraines due to changes in my hormones. I struggled with concentration problems and became very noise sensitive. Because I couldn’t concentrate as easily as before, I felt anxious that I wasn’t completing work tasks efficiently.

‘Much of the time I was experiencing sleep disturbances and then not getting back to sleep again for a few hours, so I was also incredibly tired all the time.’

She eventually left that job in 2019 directly because of her menopause symptoms and at the beginning of 2020 she started working from home as a mental health specialist.

‘I have found a greater flexibility working from home that really supports my continued symptoms. For example, I can now set my own pace, I feel less tired and it’s easier to concentrate.

‘I can use the time taken to commute to now integrate more sleep and time to practice yoga, which helps calm my anxiety. When I feel my anxiety or stress levels rise I can move away from my laptop and take a break, either listening to music or going outside into my garden and reminding myself to breath.’

‘My experience is that, overall, working from home is a much more positive experience, feeling less stress and anxiety and gaining a greater degree of flexibility in my daily work pattern that supports my menopause more than when I was working in an office. The only con to working from home is that it can feel lonely.’ 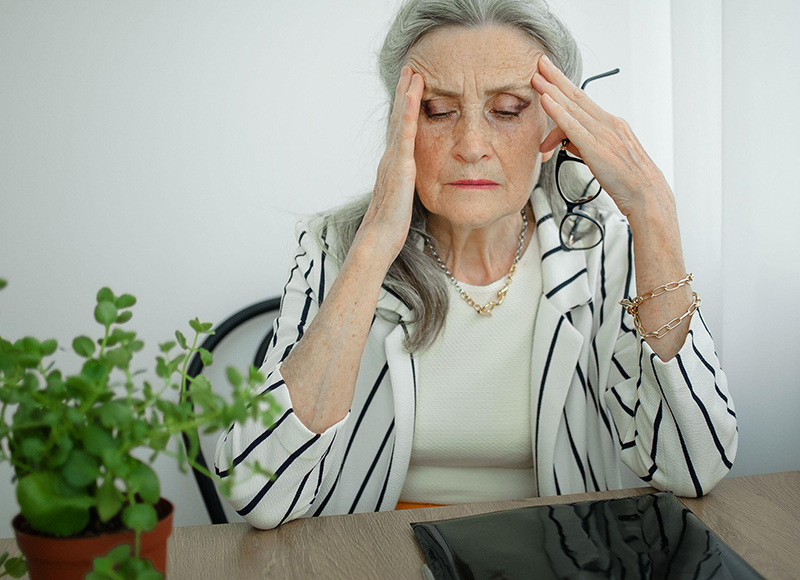 So, why do menopause symptoms, something 50 per cent of the global population experience, make it so difficult to complete what previously seemed like simple tasks?

Dr. Martin Kinsella, a doctor and hormone expert, explains: ‘The hormone changes that occur during menopause and perimenopause cause a whole host of symptoms which can vary hugely from one woman to the next. I see first hand with my patients the difficulties these symptoms can cause women in the workplace because of the impact they have both physically and psychologically.

‘Hot sweats, changes in body odour, tiredness, irritability, forgetfulness, weight gain, mood swings, brain fog, incontinence and suchlike can all affect a woman’s confidence at work. Indeed, research shows that women with severe symptoms take an average of 32 weeks of leave from work, and without the support of employers this limits progression and can lead to long-term unemployment.’

‘Women of menopausal age (45-54) make up 11 percent of all people in employment and 23 per cent of all women in employment, which is 3.5 million women. As such their importance should not be underestimated.’ 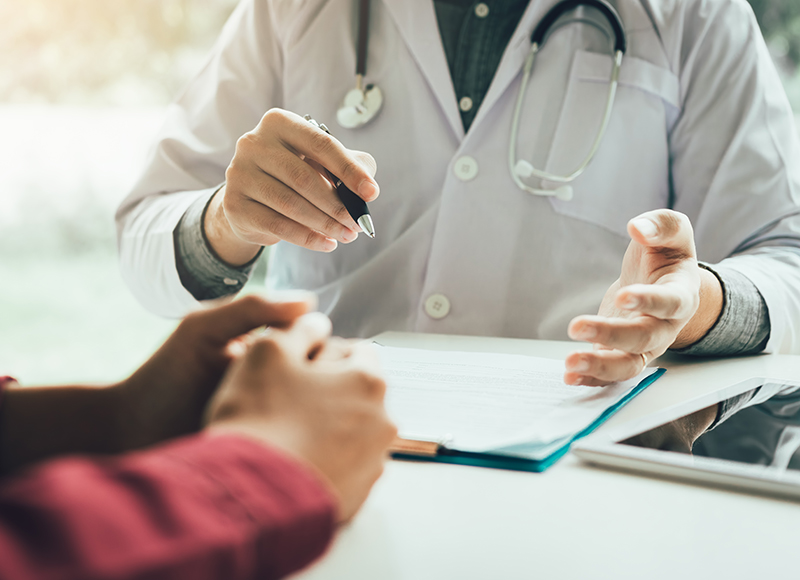 So what can, and should, employers – and the government – be doing to help their menopausal employees?

‘There aren’t currently any specific provisions and legislations in place around menopause in the workplace, which I feel needs to change,’ says Dr. Kinsella. ‘There is currently an enquiry underway led by MPs into menopause discrimination, so hopefully it is only a matter of time before specific menopause rights in the workplace are implemented.’

Does Dr. Kinsella agree with Debi and Marcia that working from home is the way to go?

‘There are some aspects of working from home that women who are experiencing the menopause may find reassuring and some of my patients like it because it means that their symptoms won’t be apparent to others. Whilst this may help to avoid their embarrassment and self-consciousness, the downsides of working from home when going through the menopause are less support from employers and colleagues, as well as feelings of isolation.

‘On balance, I think that, whilst some women may feel happier working from home when they are going through the menopause, in general having the knowledge that you can go into work alongside colleagues and talk openly about the menopause and how it’s impacting you is far more beneficial than trying to work from home. The most important point is that women are empowered to make the decision that is right for them.’

Last November, employers were urged to support women during menopause or risk facing legal action and the Minister for Employment, Mims Davies, called for employers to strengthen their support to keep millions of women in work, plus there’s the enquiry into menopause discrimination Dr. Kinsella mentioned.

With all this in place, hopefully we’ll soon start to see more workplace support for employees suffering difficult menopausal symptoms, giving them more options than simply hiding their struggle at home, or soldiering on unsupported in jobs where that is not an option.