Meghan, the Duchess of Sussex, surprised royal fans this weekend with an impromptu appearance at the final of the US Tennis Open in New York, where she was seen supporting close friend Serena Williams in her match against Canadian Bianca Andreescu.

While all eyes were on the match while the action took place, conversation – as always – quickly turned to Meghan’s outfit choice, which centred on a cool, casual J.Crew denim dress that predictably sold out within minutes.

However, you can still get your hands on the necklace that the duchess accessorised her look with: a gold dog tag chain that’s reportedly from US brand Mini Mini Jewels.

Meghan’s version featured the initials ‘H’ and ‘A for her husband Prince Harry and son Archie, but the line also offers a range of other inscriptions such as starsigns.

The necklace is one of Mini Mini’s hero lines. In addition to Meghan’s yellow gold, it comes in an option of white gold or silver, and the option of 12 different birthstones for an extra personal touch.

It’s not the first time that the Duchess of Sussex has turned to jewellery to make a statement – back in July, the former actress wore an ‘A’ initial pendant (another nod to little Archie) while watching a match a Wimbledon, causing the website of the maker to crash twice in a row as fans rushed to follow in her footsteps. 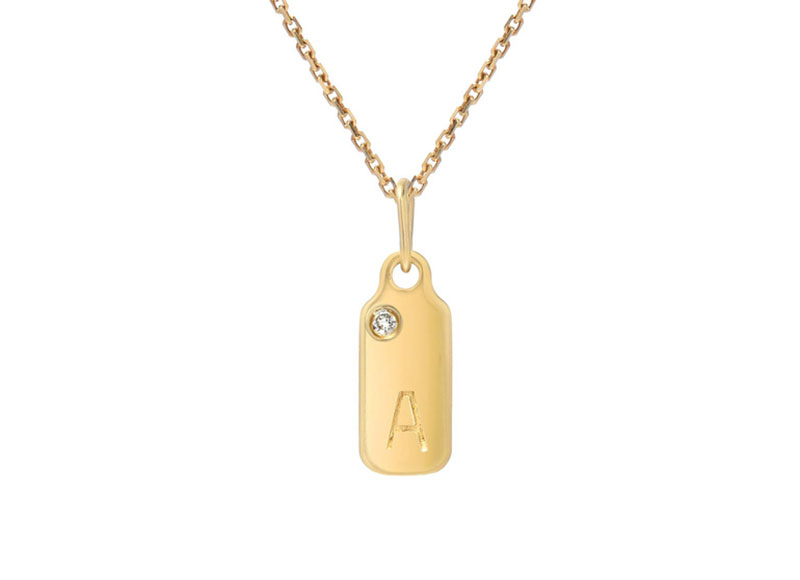 The delicate cut-out A was the creation of Australian jewellery brand Verse Fine Jewellery, whose founder Emma Swann said she’d had an ‘avalanche’ of orders after Meghan was spotted in the design.

‘Meghan is modern, fashionable and always on-trend, and personalised jewellery is the biggest trend right now,’ she said at the time.

Google Trends also reported a whopping 50 per cent increase in searches for initial jewellery after the match, so we’re sure it’s only a matter of time before initial dog tags see the same rise in popularity…

The Green Guide: How sustainable is People Tree?

The Chic List: The simple staples I swear by

The new Primark summer range starts from £6 and looks just...

YES YOU CAN: Wear autumn florals

These are the current bestsellers from the John Lewis ANYDAY womenswear...

The Chic List: It’s suits and the city for me

YES YOU CAN: Go large on collars

The best royal Christmas Day fashion over the years

The Duchess of Cambridge’s Zara jumper is under £20

These supermarket dresses look way more expensive than they are