Meghan Markle has been using her maternity leave for a very charitable cause, teaming up with the likes of Marks & Spencer and John Lewis & Partners to design a workwear collection that will benefit the charity Smart Works, of which she is a patron.

Other than a few official statements confirming the collaboration, the project has been kept largely under wraps, but now the Duchess of Sussex has given royal watchers a sneak peek of what’s been going on behind the scenes, with a series of Instagram Stories from the set of a recent photo shoot.

The new mum shared a clip of herself in a chic blue pinstriped linen shirt, teamed with smart trousers and pointed nude heels, as she chatted with the team and watched pictures be taken for the campaign for the autumn launch of the line.

And as ever, the Meghan effect has already struck, as the pastel shirt is apparently selling fast. HELLO! reports that the piece is an £85 buy from the brand With Nothing Underneath, which was launched in 2017 by Pip Durell, a former British Vogue stylist and Tatler editor.

The cut of the classic shirt is inspired by menswear but tailored for women, and ‘is easy to style for the city and just as easy to throw over a bikini,’ With Nothing Underneath says. ‘Ironing is optional as its crumpled texture looks great straight off the line or out of the dryer’ – sounds like perfect office attire, if you ask us. 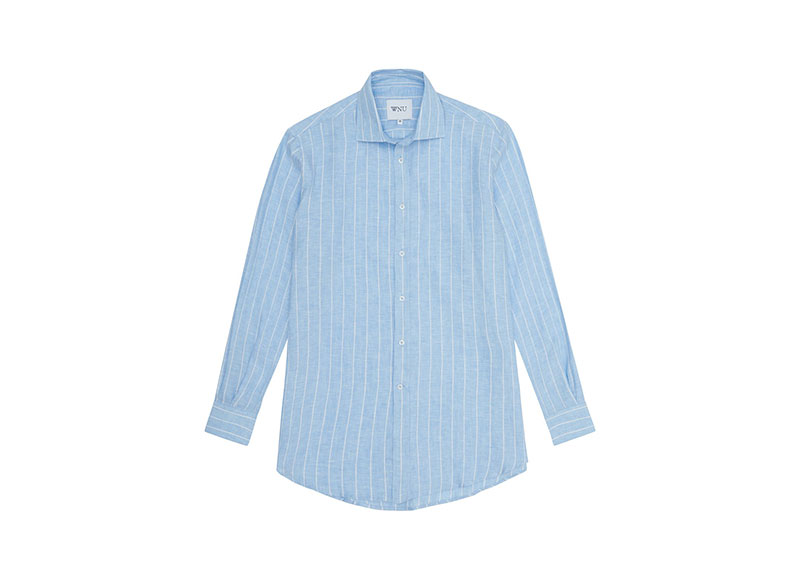 Linen Sky Blue & White Stripe Shirt, £85, With Nothing Underneath

Want to copy Meghan’s versatile pick? Head to the With Nothing Underneath website now, where it’s still in stock in sizes XS to L. You can also get the same style in a deeper lapis blue, which would be perfect for layering under knitwear when the colder months roll around, as well as a selection of other shirts in equally great fabrics and shades.