Everything the Queen wears has a meaning – especially the bold colours she so loves. As she celebrates 70 years on the throne, Claudia Joseph examines the many shades of our longest-serving monarch.

When the Queen recorded her first Christmas message since the death of her husband last year, she paid tribute to her ‘beloved Philip’. On her desk was a portrait of the couple taken on their Diamond Wedding anniversary at Broadlands, the former home of the Duke of Edinburgh’s uncle Lord Mountbatten. But it was not just her moving words– nor that Diamond Wedding image, which re-created a photo taken on their honeymoon 60 years earlier – that proved symbolic: she was wearing the same sapphire chrysanthemum brooch that she had worn on both occasions. It was a typically thoughtful gesture by the Queen, who wore an embossed wool dress in festive red created by her senior dresser and confidante Angela Kelly.

As the most photographed woman in the world, the monarch is renowned for her rainbow wardrobe, coordinated hats, Launer handbags, Rayne pumps, pearl necklaces and heirloom brooches– all carefully chosen to honour her hosts. In fact, she has barely put a sartorial foot wrong in her 70 years on the throne. ‘The colour must suit both the Queen and the occasion,’ writes Angela Kelly in her book The Other Side of the Coin: The Queen, the Dresser and the Wardrobe. ‘For example, when Her Majesty visits a school she is always dressed in a bright colour, and her hat has the kind of details that will appeal to children – feathers, twirls, flowers, ribbons. When she visits a residential home for older people, she wears a strong, well-defined colour, with a structured hat, to help those who are visually impaired to see her and feel part of the visit.’

The Queen has always paid homage to her host country on royal tours by incorporating national colours or emblems. When Sir Norman Hartnell created an evening gown for a 1961 state dinner in Lahore, he chose ivory and emerald green – the colours of the Pakistan flag. For her visit to Australia in 1974, designer Ian Thomas chose bright yellow silk chiffon, embroidered with sprays of wattle – the country’s national flower. And when she visited Canada for the 1976 Montreal Olympics, Hartnell decorated her turquoise silk shift dress with rings inspired by the Olympic symbol.

However, on occasion the design team has got things wrong. During the 2017 State Opening of Parliament, she outlined Brexit plans while wearing a hat with blue flowers and a yellow centre – resembling the EU flag. ‘It was a coincidence but, boy, did it attract a lot of attention,’ Kelly writes.

The Queen’s accessories are equally important. Bookies regularly take bets on what colour hat she will wear for Ascot so it is a state secret until the day she appears.

READ MORE: The Duchess of Cambridge’s life in pictures

Her custom-made Launer bags tend to have long handles so that she can hang them from her left arm without catching on her cuffs. Although they are said to be virtually empty–a photograph once revealed just a small purse or glasses case – she apparently uses them to send messages to her staff. If she switches her bag to her right arm, it is a signal that she needs to be rescued; if she places it on the table, it means she wants to leave.

The family firm of Rayne, which received the Royal Warrant in 1936, makes most of the Queen’s shoes: usually in cream, white or black with no more than a two-inch heel. Kelly, who has the same size feet, wears them in so that the Queen is comfortable.

No outfit would be complete without the Queen’s trademark transparent umbrella with a coloured trim to match her outfit, and gloves, which she was wearing long before Covid to ensure she is germ-free as she shakes hands with hundreds of people.

The meaning behind the Queen’s wardrobe 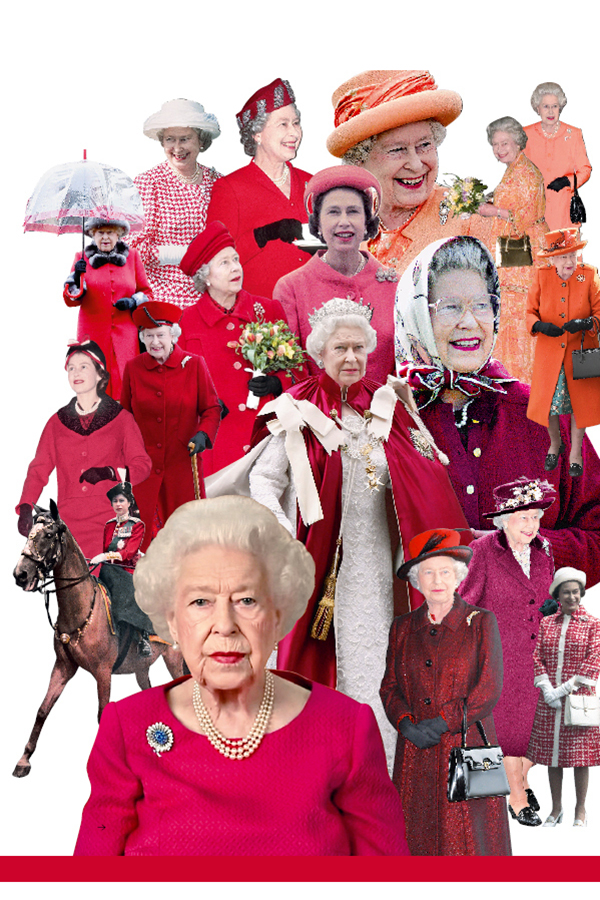 The Queen’s senior dresser Angela Kelly says that the monarch wears bold shades such as red because ‘they allow her to stand out from the crowd and be visible to well-wishers who have come to see her’. And, as the outfit she wore for last year’s Christmas message showed (bottom centre), she still likes to accompany the shade with a slash of vibrant lipstick

Yellow: Always a ray of sunshine 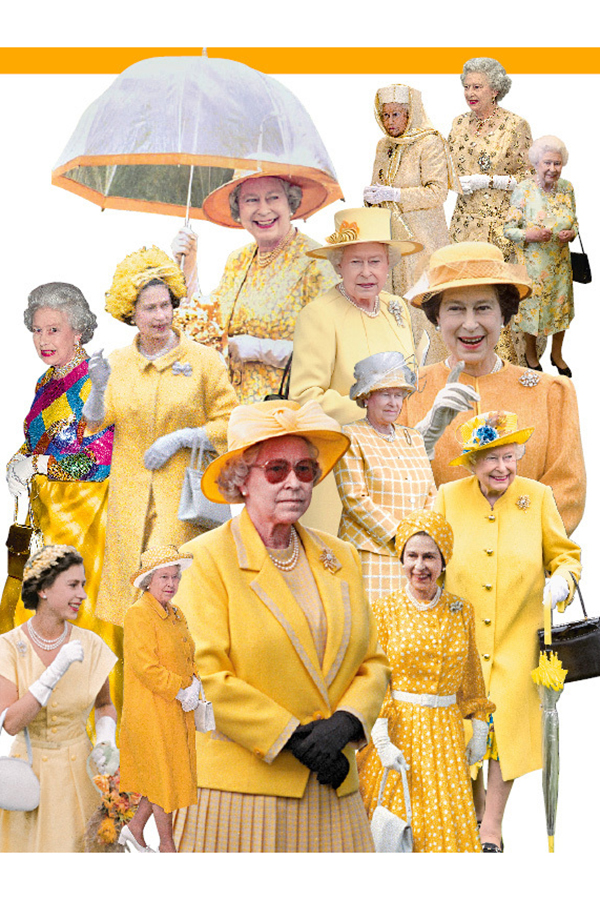 The Queen’s biographer Robert Hardman once suggested that the monarch never wore beige because she wouldn’t stand out in it. She does, however, favour sand and buttermilk hues alongside bolder egg-yolk shades of yellow, which allow people to say they’ve seen the Queen – even if it was just the corner of a hat.

Green: For hope and luck 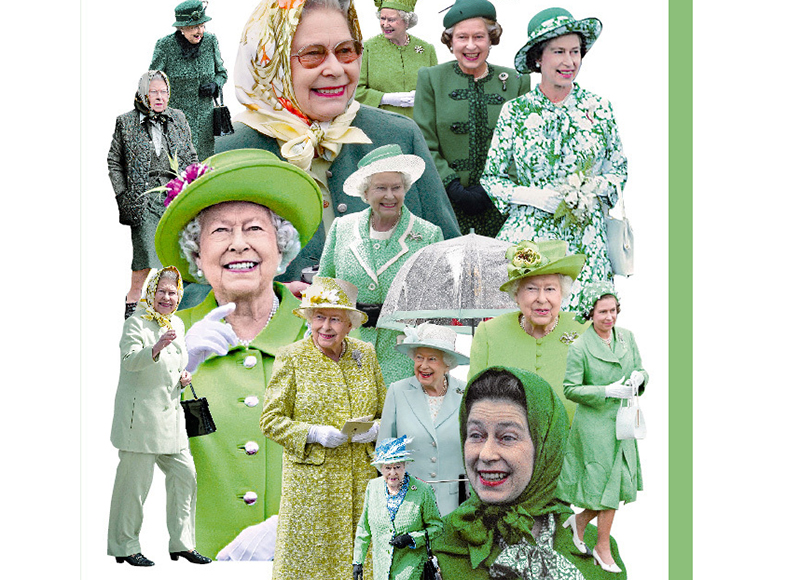 From neon green to chartreuse, green is a celebratory colour for our Queen (although she won’t wear it at grassy venues so as not to blend in). When she wore an emerald-green Stuart Parvin hat and coat for her 90th birthday celebrations in 2016 (bottom left), she trended on Twitter with the hashtags #NeonAt90 and #HighVisHighness. Some say she enjoys this colour for its associations with hope and good luck. 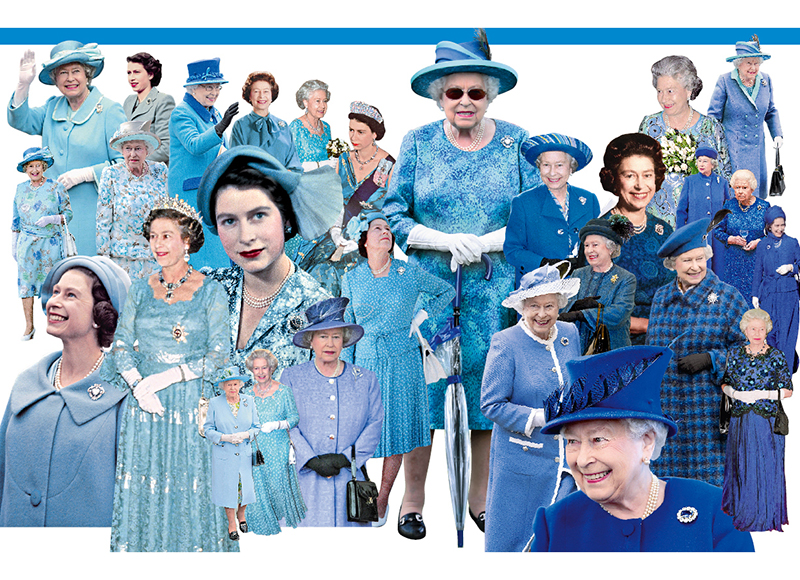 According to Vogue, the Queen’s favourite colour is blue. After analysing the monarch’s wardrobe for a year, it discovered that she had worn a shade of the colour almost 30 per cent of the time. Certainly, since lockdown, she has stuck to a palette of blue and turquoise in her video calls – shades that symbolise calm and signify the importance of the NHS.

…and a shade for all seasons

‘I consider the four seasons separately and individually when designing for the Queen,’ Angela Kelly has said. Royal blue, for example, is brought out in winter, whereas pastel blues will be seen more in spring alongside flower motifs on lightweight coats and jackets.

Pink: From pretty to powerful 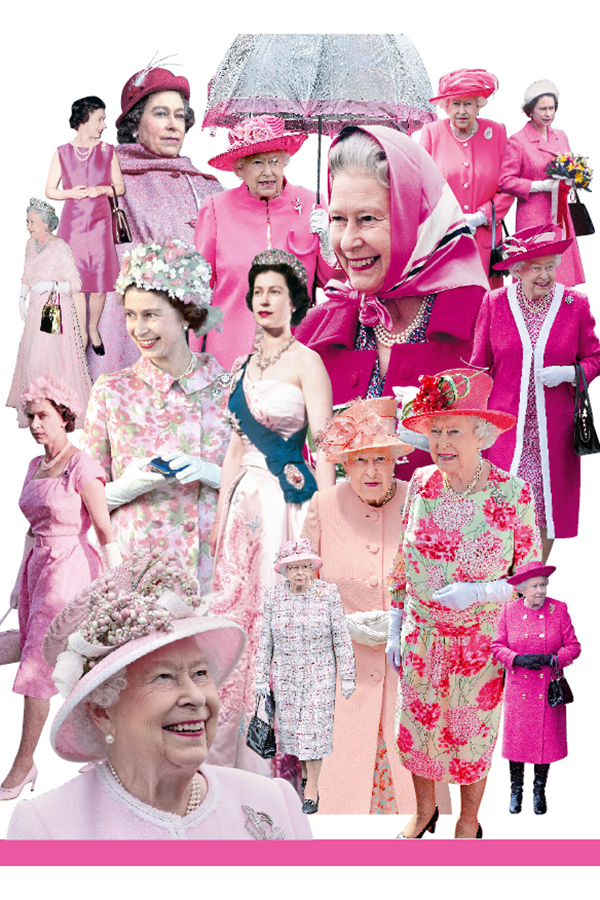 Some of Her Majesty’s most memorable looks have been in monochromatic pink shades– from salmon to fuchsia – and the study by Vogue revealed it was one of her most-worn colours. Baby pink and pastel tones are a wardrobe staple, but she doesn’t shy away from bolder blocking in hotter tones. It’s a make-up bag favourite, too– preferred over brighter reds. 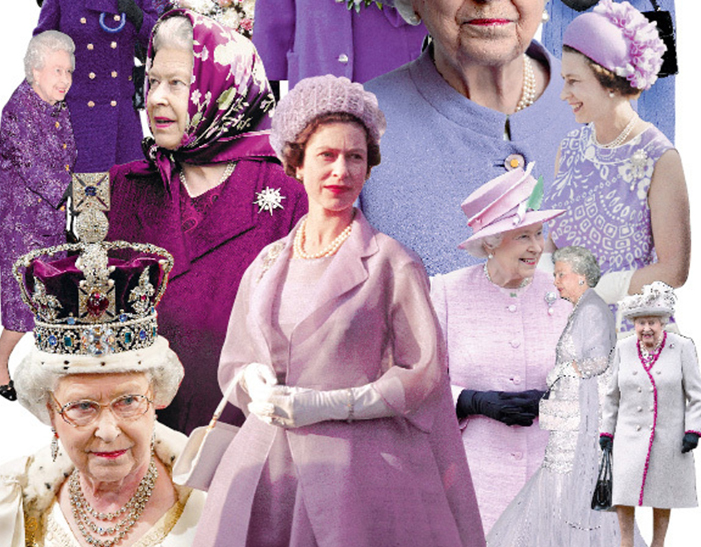 A colour long associated with royalty and wealth (in fact, Elizabeth I forbade anyone except close members of the Royal Family to wear it), purple truly is the shade fit for a Queen. She’ll opt for lighter lilac choices in spring and summer, while Angela Kelly explains that her winter dressing is more likely to see her don ‘deep purple, as well as velvets and wools, with matching scarves and warm hats’.

Holly Willoughby’s stylist’s new beachwear edit is all you need for...

15 leather fashion buys to help you take on the trend