Have you ever stopped to ponder the meaning behind the names of the royal family members we know and love? Here’s the (very regal) history behind some of the most popular royal baby names chosen by the Windsor family and their ancestors over the years – from the true translation of George, to the reason there’s so many mentions of Louis.

Prince George, the eldest of the Cambridge family’s children and third in line to the throne, has a name which actually means ‘farmer’ if you trace it back to its Greek root in the word ‘georgos’. However, the name George echoes throughout royal history, and the George we know and love will eventually be the seventh of his name when he is crowned.

His middle names are Alexander, another historic choice with a nod to the Queen’s middle name Alexandra, and Louis – well, more on that one later.

Charlotte is the feminine form of the name Charles, the princess’ paternal grandfather, and it’s said that her chosen name was likely a tribute to his. Her middle names follow this pattern – Elizabeth, for her great grandmother the Queen, and Diana, for her late grandmother the Princess of Wales.

Charles has been a name associated with kingship for centuries, but we have already had a Queen Charlotte and other Princess Charlottes too – although they were all several hundreds of years ago.

Louis is a long-standing family name, travelling down to the royal family’s newest addition through his father and older brother, who both have it as a middle name. It’s thought that the name was previously passed to Prince William in honour of his grandfather Prince Philip’s favourite uncle, Lord Louis Mountbatten.

Louis has French origins and means ‘famous warrior’ – here’s hoping the little one lives up to his parents’ powerful expectations.

Alexander, Arthur and Albert were names expected to be chosen for Prince Harry’s first child. But Harry and Meghan decided on Archie, which doesn’t really have any connection to the British royal family. Archie means ‘genuine’, ‘bold’ or ‘brave’ but most fittingly, Harrison – Archie’s middle name – means ‘son of Harry’.

Unlike her older brother Archie, Lilibet Diana Mountbatten-Windsor’s name is loaded with royal family history. Prince Harry and Meghan were inspired by the Queen’s nickname for their daughter. Her Majesty gained the nickname when she was a toddler and unable to pronounce her name correctly, so her grandfather King George V called her Lilibet. Baby Lilibet, who is known as Lili, has the middle name Diana, which is obviously a tribute to Harry’s late mother, Princess Diana.

The name William means ‘determined protector’ – a fitting choice for a man who will one day become king. However, his mum Princess Diana previously revealed that she and husband Charles disagreed over the names they wanted for their sons.

‘I chose William and Harry, but Charles did the rest,’ she explained in the book Diana: Her Story. ‘He wanted Albert and Arthur, and I said no. Too old!’ William ended up with the middle names Arthur Philip Louis, which appear to be a nod to his father’s more traditional tastes. Philip is probably a tribute to his grandfather.

It’s easy to forget, as he’s been known by his nickname pretty much since birth, but Prince Harry was christened Henry Charles Albert David. Henry is an English name given to a man who ‘rules his household’, another appropriate pick for a regal son. Charles and Albert are royal family classics, while David means ‘beloved’.

Both William and Henry are names that have been used numerous times by the royal family throughout history – there have been four previous King Williams, and eight King Henry’s, with Tudor monarch Henry VIII undoubtedly being the most famous thanks to his succession of six wives.

Beatrice wasn’t officially given a name until two weeks after her birth, and even then it was seen as an unusual choice: the medieval Italian form of the Late Latin name Beatrix, meaning ‘she who makes happy.’

Her middle names, however, are far more traditional: Elizabeth Mary, with both names honouring her grandmother The Queen.

Even Eugenie herself admits that her name, which means ‘wellborn’, is a little tricky to pronounce: ‘Whenever we used to meet foreign people who were struggling with it, my mum and I would help them by saying, “It’s like use your knees,”‘ she admitted to the Telegraph in 2008. ‘But whatever. I am now used to every pronunciation.’

The name is so rare that no bets at all were placed on it before her arrival, but it is actually still a royal homage: Victoria Eugenie of Battenberg, the granddaughter of Queen Victoria, was the first member with the moniker. 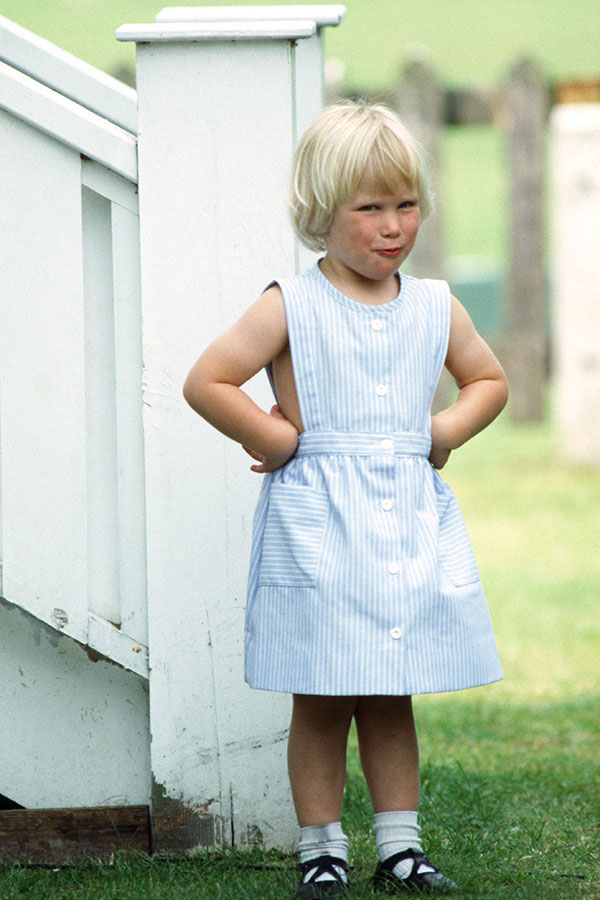 Zara Tindall, nee Phillips, has her uncle Prince Charles to thank for her name, which means bright as the dawn.

‘She made a sudden and positive arrival and my brother thought it was an appropriate name,’ her mother Princess Anne, who is also mum to the less quirkily-named Peter, once revealed.

TV queen Kirstie Allsopp on what led her to write a...