Not long after Elizabeth Hurley had her son, I remember reading a quote in which she said how overjoyed she was to be a mother – but that she’d accepted her life would never be the same again. One of the examples she gave was that, post-pregnancy, she realised she was ‘never going to sit eating lunch on a boat in just a skimpy bikini’.

Despite the glaring gulf in our lifestyle (from that one brief phrase I could picture the whole thing: the fizz, the lobster, the staff, the coast of Sardinia), I felt a real kinship. My daughter was born a few months later and I knew I’d never wear a bikini again either. Not even to eat crisps huddled next to a windbreaker.

Three years after giving birth, Ms Hurley launched her own swimwear line – and did the modelling for it. (To this day, she can regularly be seen in many a bikini on Instagram.)

My stomach was still a secret. After a caesarean and decades of sub-optimal exercising, it was the texture and colour of cold porridge. Only I was allowed to see it – and even then I did my best not to, occasionally catching an accidental glimpse while changing or bathing. The last thing I would have dreamt of doing was showing it off in public in a bikini.

And apart from my own body-image issues, I couldn’t help buying into the idea that there was something unseemly about a woman over 45 (who wasn’t Elizabeth Hurley or Elle Macpherson) getting around in scanty swimwear. It seemed on a par with beer bellied old blokes loafing round the shops in summer with no shirt on. Inappropriate. Not nice. Too much information.

Then, when I was 51, I went on a very hot holiday to Corsica. Lying on the beach in a tankini lined with industrial-strength spandex, I felt like a boil-in-the-bag frankfurter. There was no relief even from a dip in the Med. The healing waters could not penetrate my manmade-fibre armour. Yet all around me French and Italian woman of every age and shape gambolled and lolled in skimpy bikinis, acres of flesh on view. They looked so happy in their skin, no matter how much of it there was. I was very unhappy in my Lycra torture chamber.

Suddenly, I couldn’t bear it another minute. I headed for the nearest beachwear boutique, bought three bikinis and wore them every day for the rest of the holiday. No one pointed, no one vomited at the sight of my stomach, no one died.

By the end of that holiday, after mornings joyfully playing beach tennis in my bikinis and afternoons lying by the pool reading in them, I had a golden brown wobbly tummy, which is a whole different thing from the porridge version. I felt quite fond of it. Even my midlife-six-pack husband and judgmental-as-only-a-child-can-be daughter said I looked better in the bikinis, rolls and all – because I clearly felt so much happier in them.

But beyond the freedom from the tankini’s confidential unforgiving grip, I discovered another benefit of baring my stomach – it seemed to make me feel good, in a very specific and fundamental way. I felt revitalised from within and that feeling stayed with me for months after the holiday. As did the brown tummy, lovingly moisturised after every bath and shower.

Since then, I’ve grabbed every opportunity to sun my tum – rushing into the garden, pulling up my shirt – at the first sign of a decent sunbeam, a behaviour I realise I’ve observed for years among committed sun-worshipper pals. For them it’s never enough just to sit with bare legs and arms stuck out to catch the odd ray – it’s shirts off for the chaps, bikinis on for the gals. Or, as you will see in London parks in summer, underwear to the wind in the public gaze.

Which made me wonder – is there a specific health benefit to getting sunshine on to the skin of the abdomen? A little online researching revealed that there genuinely might be. Certainly there are the plethora of research projects recently published and ongoing into the wide-ranging benefits of sunlight on the skin, which it seems does a lot more for us even than making the bone-strengthening vitamin D. So it could be that it’s just having more skin exposed to the sun that increases the beneficial feeling, rather than where it is, but committed sun-seekers I’ve talked to have no doubts about the benefits of tummy sunning.

Broadcaster Maria McErlane, who lives near me on the south coast and is to be found most summer mornings lying outside her beach hut with her lovely bronzed bikini-ed body in full sun, is one of them: ‘I’ve never forsaken the bikini. I’m 60 now and I’ve been wearing them since I was 18. Getting sun on your tummy makes you feel good – and it makes sense to me, as a lot of serotonin is produced in the gut.’

Maria is also adamant that a woman should wear whatever she likes – regardless of age or shape – on the beach, as anywhere else. Indeed, she feels that getting older gives women a free pass. ‘I’m 60, I’m invisible – great! I can wear a thong and tassels. My grandmother was right: no one is looking at me.’

Interiors stylist Hilary Robertson is another lifelong bikini-believer, for comfort as much as anything. ‘I’ve never stopped wearing bikinis. Partly because I’ve got big boobs and prior to Bravissimo it was easier to buy a different size top and bottom in bikinis. I did think when I was in Puglia last year, “I’m 55, too old to wear bikinis, I should wear swimsuits…” but it just gets too hot.

‘European women wear bikinis whatever size they are. A lot of things can be disguised with a tan. It’s about feeling comfortable in your own skin and I feel much better  getting the air and light on mine.’

Me too. With summer upon us and a trip to Greece in the diary, I can’t wait to get my once-hidden belly back out into the sun’s caress. I’m off to buy some new bikinis and looking forward to rebrowning my tummy – and enjoying months of feeling revitalised after it. I might even look at Elizabeth Hurley’s range.

From secret support to extra coverage, there’ll be no costume drama with these. 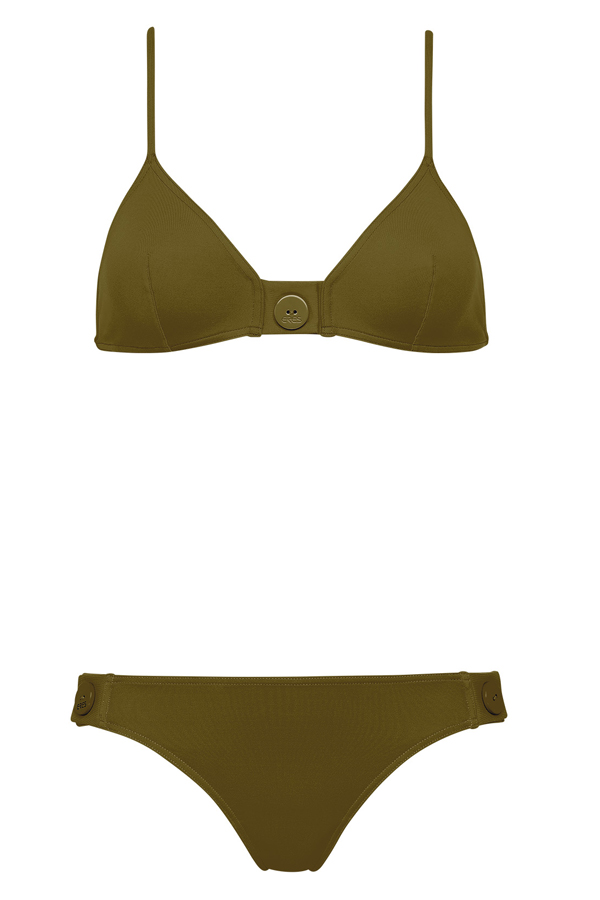 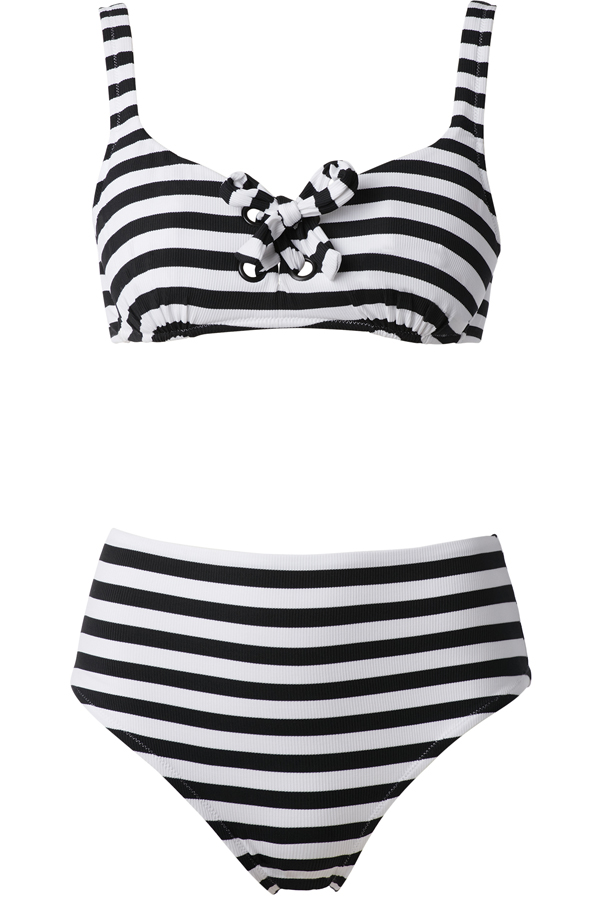 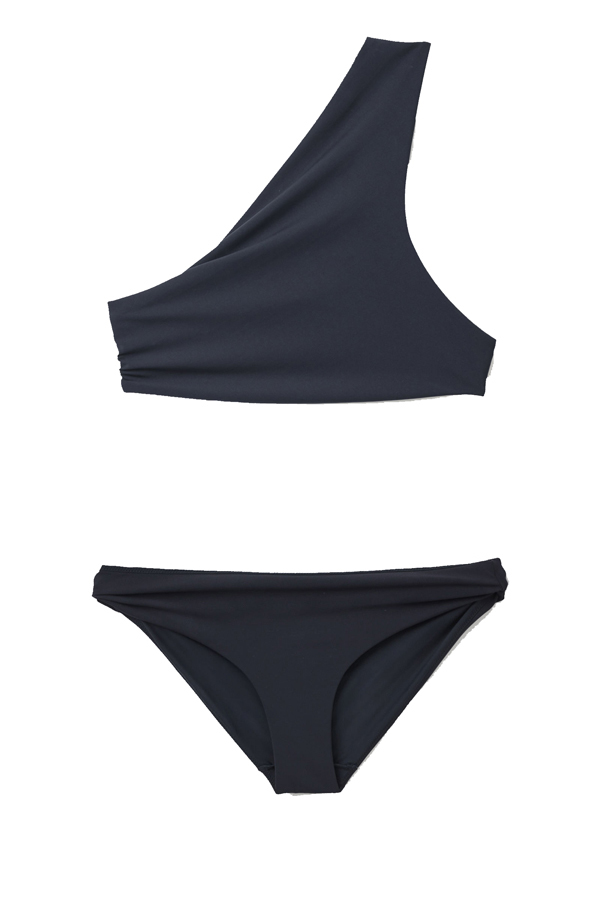 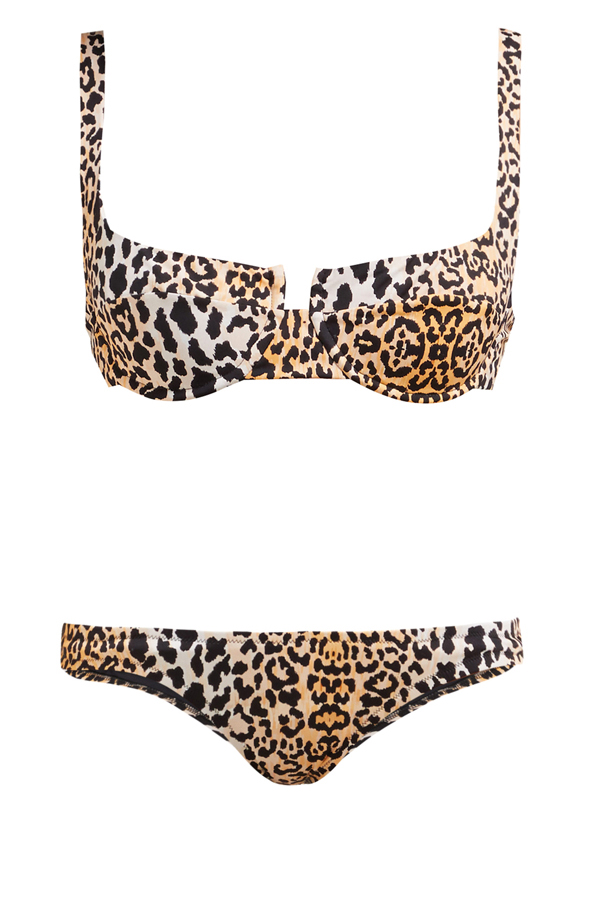 Looks great with all skin tones Top, £80, and bottoms, £70, Reina Olga, from matchesfashion.co.uk 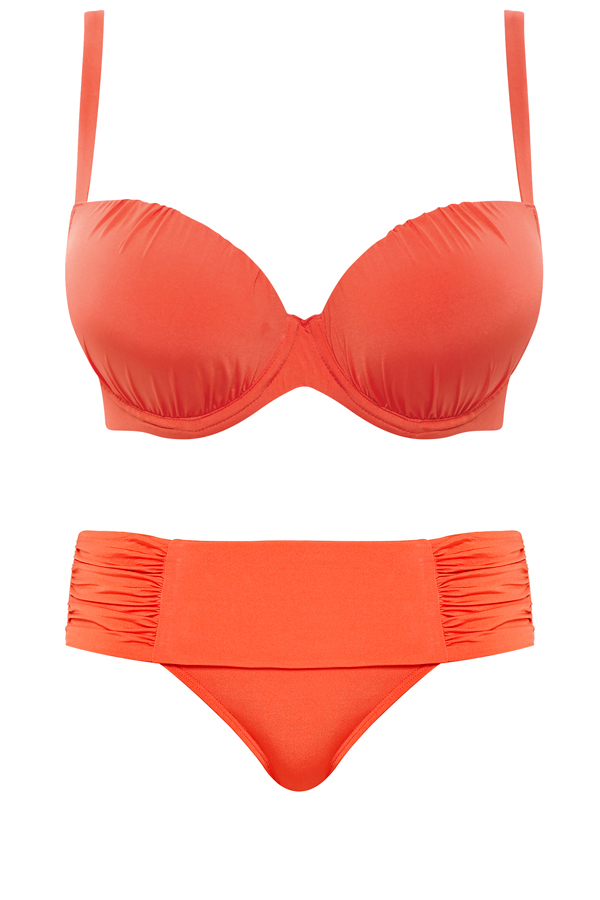 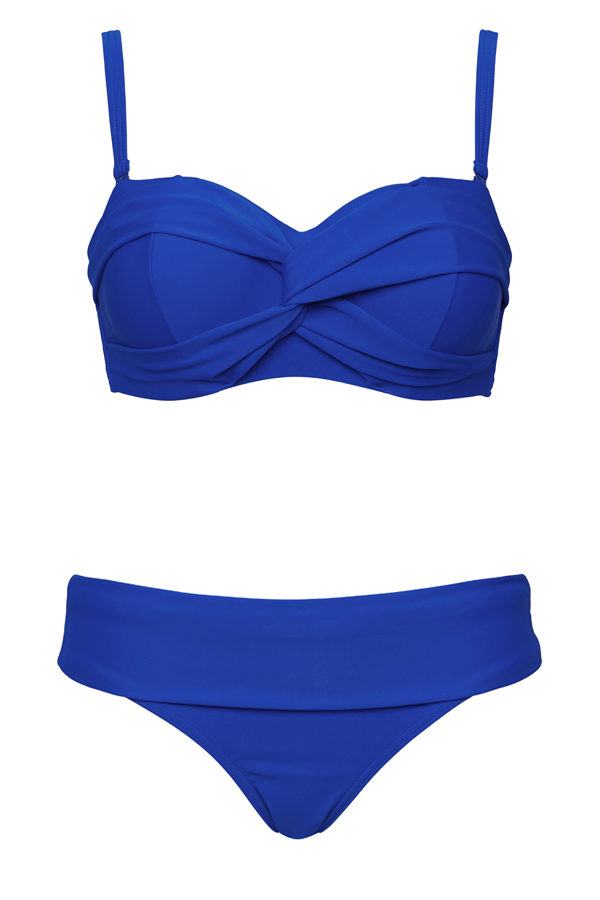