I was approached by a newspaper the other day to write a piece outlining ‘The holiday that changed me’. I suppose they’ve come up with this sort of thing to fill the now empty travel pages. I sent them three ideas.

1. I went to stay at GoldenEye, Ian Fleming’s house in Jamaica, with my then boyfriend. We had a personal chef, private beach, hummingbirds and pool, but all he wanted to do was watch Euro 2000 with the blinds down. This holiday changed me, in that I realised it’s more fun to go away on your own, as a man will only get on your nerves and leave coins on side tables. (After I was sacked from Marie Claire, I took him to Florence for a long weekend, staying in the Villa San Michele, which is a former monastery. I spent most of my redundancy money, only to find we were put in a modern annexe. So this trip changed my attitude to booking: always specify the room, and if they refuse, don’t go. (If you ever go to Babington House in Somerset, nothing but Madonna’s old room will do.)

2. I went to Udaipur with my then husband on a yoga course. I discovered I loathed yoga and developed ‘room envy’ when I found other journalists on the (freebie) holiday had a better suite than me. I always find men like to belittle me when we are in groups of people, viz, sitting by the pool having lunch at a long table, my husband told everyone that a mongoose had emerged from a pipe and swum in the pool. To which I replied, ‘How did its antlers fit in a drainpipe?’ Only for him to reply, ‘That’s a moose. We’re not in Canada. Tch.’ On holidays in developing countries, I’m always cast as the colonialist, given I went to a girls’ grammar and once played netball.

3. An old friend called Alex has just tweeted me. We worked on Company magazine in the 1980s. She reminded me that we went on holiday to Portugal in 1983 with another friend and my sister*. I spent the entire week in a state of feverish longing for David, who was then living next door, aged 31 and handsome. I performed sit-ups by my bed every day and sunbathed topless on the roof to hone myself for my return, when he would, of course, discover he had missed me. My sister insisted we buy dozens of terracotta pots, but when we got back to Gatwick, they were all smashed. As were my hopes of getting David, who had in the interim got engaged to an air hostess.

I put a lot of work in to my response, as you can see, only to receive an email saying, ‘The editor thinks that’s all a bit negative, so we’re going to pass.’

I don’t care if I never go on holiday again**. I can’t think of a single vacation I’ve enjoyed. Honeymoon in Seville: disaster. My husband turned out to be too recently qualified to drive a hire car, so I had to negotiate a mountain on the wrong side of the road. I kept screaming, ‘I’m not Jeremy Clarkson!’ During a week in New York, in bed one evening my husband attempted to perform oral sex. I sat up, aghast. ‘When you left early for yoga this morning, you went and had sex with Daphne! You’re doing this because you’ve already had sex today and you can’t do it again and because we’re on a mini break you feel obliged!’

So I don’t know why the newspaper turned my bad trips down, as that is the reality of being holed up with a man in an environment that requires you to communicate, not just leave each other Post-its on the fridge.

Holidays, you see, are like men. You dream about them, you look forward to them, then you find out they’re not a penthouse suite at all but an annexe with a view of the bins.

* Alex has photographs. This is me when I was 21 – we can have a poll on whether or not David was right to eschew me 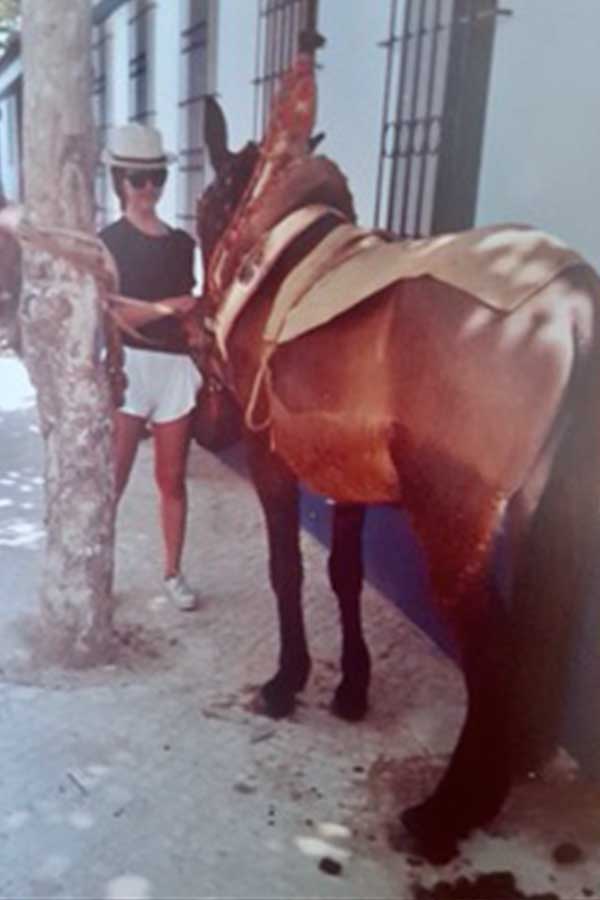 ** Except to Sydney to stalk the Hunk, obvs

Liz Jones: ‘In which I remember my brother’

Liz Jones: ‘In which the house hunt is on hold’

Liz Jones: ‘In which I embarrass myself’

Editor’s letter: My glasses & me, a love-hate story

You could win this six-bedroom Georgian country manor for just £2.50

Do you need breathing lessons? What learning how to breathe ‘consciously’...

Susannah Constantine opens up about her ‘mental menopause’

Fiona Gibson: The handbag that healed my heart

The Chic List: ‘Why I taught my wardrobe French’