A quick recap. I have sex with the Rock Star. He loses his jacket. I, on the other hand, find I have cystitis. I ask David if he wants to get back together or not. I send him a proof of my column, which details him telling me his heart and mind are screaming ‘yes’, but that his body says ‘no’. That he has gone into a physical decline and has accepted his fate. In short, he says I deserve better. 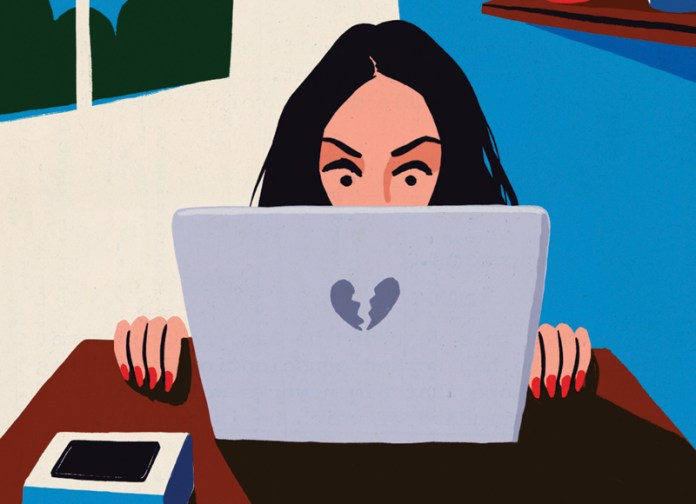 In order for him to allow me to print that conversation, which I find sad and guilt-making, I dent his resolve with an invitation to the Yorkshire Dales for his birthday weekend. The Rock Star says, ‘Is it all over with white pepper guy?’ before we meet for a festival weekend in a hotel with square pillows. I tell him I’m not sure as the man I’ve been in love with since I was 21 has accepted my invitation to come north for his birthday weekend by saying, ‘I will be there at 7pm on Friday. I will bring bread and gin.’ And what do I do? I email Rudding Park hotel, spa and golf (forget the golf) in Harrogate and book:

I also request facial threading, but apparently the threader is part time or on strike or dead, I don’t know. Tweezers it is.

I have laser treatment for thread veins when I’m in London for work. I wash my cushion covers and take the dog beds to the laundry. ‘Gracie?’ the woman says with a soft sigh.

Then I make a list for Waitrose in Harrogate. It’s long. I will need a trolley and help with packing.

Cumin. White pepper. A cauliflower. Spinach. Chickpeas. Chillies. Tomatoes. Basmati rice. Ginger. Coriander. An unwaxed lemon. Andrex wipes. My special toothpaste. Artisan tonic water. Flowers, although men never notice them. A few 60s man things like marmalade, milk, butter, Revels. Then I email David and say, excited, ‘We can watch Paul McCartney live at Glastonbury on Saturday night on telly!!!!’ (I’ve only been to Glasto once, the year Amy Winehouse performed. I pitched my tent on a slope figuring it would fool my head into thinking it was on a pillow. It didn’t. The loos were so disgusting I didn’t go all weekend.)

I’ve been mulling over what I should get him for his birthday. I’ve already done N Peal cashmere, twice. A gold-plated Dunhill lighter. A Burberry suit. An iPad. A holiday in Marrakech in the hotel where they filmed The Night Manager.

Dinner at The River Café. Dinner at Heston Blumenthal at the Mandarin Oriental Hotel (my main course was stuffed celery). A private concert inside Abbey Road Studios. A mini break at the Plaza Athénée in the Carrie Bradshaw suite, when he kept ordering €30 espressos then complaining they were cold. A catwalk show at the French Embassy in Kensington. A week in a villa in St Tropez, where he over-reduced the tomato sauce and cleared the fridge of its food and alcohol, which I would have left for the cleaner. Dublin, when I was invited on a TV chat show. Oxford, for a debate, starring me, at the union. A film premiere, when I introduced him to Dave Gilmour and he sat next to Joan Bakewell. But now I have just the thing. I know he will be delighted. It will transform his life. I simply cannot wait.*

And do you know what he replies? Can you guess? Can you?

‘Hi. I have been thinking about this. Perhaps it would be best not to travel because of the train strikes. I hope we do meet up at some time. X’

* It is not a new iPhone complete with accessories.

**I’m now slightly wondering about the change of heart. Did he see the photo of me in YOU where I am practically bald?

What Liz Loathes This Week

Liz Jones: ‘In which the house hunt is on hold’

Liz Jones: ‘In which I embarrass myself’

Liz Jones: ‘In which I have a very dirty weekend’

Collins Dictionary has announced its 2018 word of the year –...

Jennifer Lopez is launching a skincare line next year

Edwina Ings-Chambers: Let me tell you about big little buys…

The NHS has launched a series of free HIIT and pilates...

How to be as happy as your dog