Tom is bowled over by the latest venture from one of his favourite chefs.

One bite – of sweet, slippery razor clam mixed with richly earthy morcela sausage – is all it takes to capture the soul of Lisboeta, the new restaurant from Nuno Mendes. Because the dish encapsulates not just his sheer culinary nous (it’s a merry riot of both taste and texture), but the very essence of Portuguese food too, where sea meets soil with such magical aplomb.

Mendes is one of those chefs who can glide easily between the haute and the gutsy, the technically precise and the smack-ya-gob glorious, a man never constrained by mere geographical borders. As seen at Viajante, his first major restaurant, that threw all sorts of cuisines together with heady, thrilling effect. And Chiltern Firehouse, where the memory of his crab doughnuts lasts rather longer than the ephemeral glare of the paparazzi’s flash. But it was at Taberna Do Mercado, a tribute to his Portuguese homeland, where I was at my most happy, the dishes proudly and unashamedly rustic. 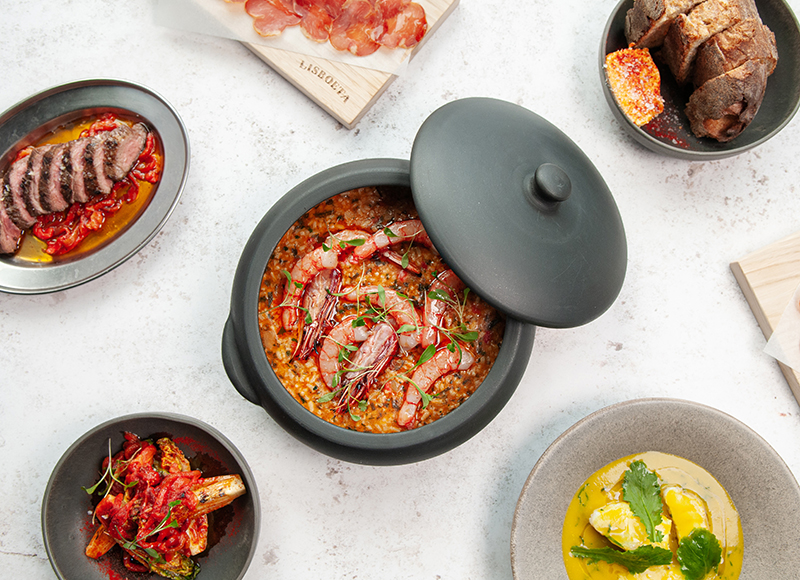 Lisboeta is all about the food of, yup, you’ve guessed it, Lisbon, Portugal’s capital city and one of my favourite places on earth. Not just for that magical light, and the self-effacing, slightly melancholic charms of its inhabitants (saudade, the nostalgic ‘presence of absence’ runs thick through Portugal’s veins), but the eating too. It’s mind-blowingly good, at every level.

Just like Lisboeta. There’s a hearty empada stuffed with pork vindaloo (more vindaloo, I know. But come on, it is a great Indo-Portuguese fusion), with a nudge of garlic, a whisper of chilli and a pronounced citrus tang. And coarse-cut beef tartare, gently spiced and softly smoky, mixed with chouriço and served with chunks of pickled turnip for crisp, sharp relief.

Bacalhau à brás – soft, silken, eggy salted cod – comes buried under a pile of fried matchstick potatoes. It’s a classic dish of pure mellow magic, the exact opposite of arroz de marisco, all salty, spicy Atlantic swagger, each grain of rice fecund with shellfish stock of dark, profound depth. At its side, a dozen prawn heads, to suck or squeeze at your leisure. That’s the thing about Mendes. He can do posh, and he can do punchy. But he never fails to cook food that you really want to eat.

8 surprising foods that count towards your 10 a day