They’ve been there, done that – so who better than these fearless female trailblazers to give us savvy advice for everyday dilemmas?

Josephine Baker, on having it all

Women ‘having it all’ is a coded phrase for ‘having what men have’ – finding love, excelling at work, as well as looking after their families. Dancer, spy and activist Josephine Baker was born to a poor family in Missouri, but became the most highly paid entertainer in Europe – no mean feat for a black American woman. In 1937, she took French citizenship when she married a Frenchman, her third husband, and she went on to be honoured for her work for the French Resistance during the Second World War.

Josephine was also a mother: she adopted 12 children from different races and religions, calling them her ‘Rainbow Tribe’. So did she have it all? She was undoubtedly an extraordinary woman and her talents and influence are beyond the reach of most of us. However, there are always two ways of looking at a story: was Josephine a stripper, with four failed marriages, rejected by her homeland; or was she an astonishingly unique performer, one who had friendships and romantic relationships with men and women, a civil rights champion, a well-meaning mother and inspiring artist and war hero?

Most of us would be immensely proud to have anything near the kind of life she had, but it’s worth remembering that nobody gets it all right all the time. Having it all just means getting what you want on your terms, to the best of your abilities; and the fabulous Baker girl certainly did that.

Coco Chanel on killing it at work

Never discuss your children. But do talk about them when you’re trying to bond with new clients. Adopt a friendly facial expression when having difficult conversations. But act like a man and be assertive, too. There’s a bewildering array of advice for the career girl trying to get ahead. Happily Coco Chanel is on hand to show us another way.

After a short stint as a singer, Coco caught the eye of a playboy cavalry officer, Etienne Balsan, who introduced her to an Englishman called Boy Capel and they provided the financial backing via a bank loan for her first business selling hats in 1910. When she discovered that, in spite of booming business, Boy hadn’t paid off the debt, she resolved to take charge of the finances herself and by the following year had made enough money to pay off the loan.

Coco’s genius lay in breaking the rules and turning fashion formality on its head. She was a rebel determined to free women from the constraints of corsetry. She used everyday fabrics and transformed them into pure luxury and took notes from men’s tailoring to create her iconic collarless suits. She inspired women to wear their hair short and she reclaimed black from its association with mourning – her little black dress redefined the concept of chic.

Born in the 19th century, she remains ice-queen cool even now in the 21st. She built a  business empire in her own name from scratch at a time when being a woman was a massive hindrance. She fought like a tiger to protect and grow her assets; she was brave, totally original, loyal to her friends and happy to call out people she thought were phonies. She took no s*** whatsoever, which is a pretty superb business model.

Hedy Lamarr on knowing your worth

Regarded in her 1940s heyday as the most beautiful woman in the world, Austrian-born screen siren Hedy Lamarr was also one of the smartest – though it took the world a while to wake up to this genius wrapped in the guise of a goddess. With knowledge gleaned from her fascist, arms-dealing ex-husband (who failed to realise that she was soaking up all manner of intel whenever the Third Reich top brass came to supper), she moved to the US where she worked with pianist George Anthiel to come up with a device to help radio-controlled missiles break through German blocking frequencies.

They gave their patent to the US Navy for free in 1942, but it wasn’t exploited until later, contributing to the technology we now use every day in our mobile phones, wifi and GPS. Hedy loved inventing things and during the war applied to join the National Inventors Council, but was rebuffed and told that she should use her celebrity to raise money for the war effort instead. So she raised more than £5 million in one go, but carried on creating new designs for things such as traffic lights and tissue boxes.

She died aged 86 in 2000, still primarily lauded for her pulchritude rather than her scientific prowess. Smart-talking, smart-thinking, always curious and engaged in the world around her, Hedy was so much more than a pretty face. These days it’s possible for people to conceive of a woman being capable of both beauty and brains. The important thing is to make the most of what you’ve got, be wise to society’s prejudices and, like Hedy, be clear on where you attribute you own value: ‘Any girl can be glamorous; all you have to do is stand still and look stupid.’

No matter how many professional coups you pull off, deep down you believe all compliments are lies and that you’re only one mistake away from being ‘found out’. So how to deal with it? Isabella Beeton ought to have felt this more keenly than most, but seems to have laughed in the face of her ineptitude and achieved more in her short life than most of us can hope for over many years.

Mrs Beeton was a young, forward-thinking entrepreneur, translator, journalist and editor who was rubbish at cooking. Having been advised by her aunt that culinary expertise took years to develop, she nicked many of the recipes for her Book of Household Management. She cherry picked the best from the books around her, benefiting from lax copyright laws.

She did come up with one innovation though: listing ingredients at the beginning of the recipe so that the cook could have everything she needed in front of her.

She died aged only 28 in 1865 after contracting an infection during the birth of her fourth child. After her death her fame grew, her book was constantly updated and given as a wedding present and it remains a fixture on people’s cookery book shelves even today. What’s extraordinary is that this dynamic young woman with few culinary skills grew into a byword for homemaking perfection. So if you’re suffering from imposter syndrome look to the original domestic goddess, who was anything but. She was an imposter but styled it out; she understood that the path to success lies in taking risks, accepting your limitations and realising that your flaws are no barrier to being completely amazing.

We’re all for good nutrition, but it can be exhausting keeping up with society’s (and our own) unrealistic expectations. If you’re ever feeling down with your dumpiness, remember the wise words attributed to Hollywood legend Mae West: ‘Curve: the loveliest distance between two points.’

Mae was just over five feet tall, a great wit and so famously well upholstered that Second World War sailors called their life jackets ‘Mae Wests’. She was proud of her body, even if it didn’t fit with the fashion of her time. In later life, she installed a mirror over her bed and adorned her piano with her own naked statue. For a Hollywood starlet, she was unusual. She was 38 years old when she was signed by Paramount Pictures in 1932 and was happy to be perceived as a risqué kind of dame, even though she endured dissing from the likes of author Graham Greene, who referred to her as ‘an overfed python’. But she ended up an icon: Salvador Dalí designed a sofa shaped like her lips and she appears in Frida Kahlo’s painting My Dress Hangs There. And her nutritional advice? ‘I never worry about diets. The only carrots that interest me are the number you get in a diamond.’

Frida Kahlo on finding your style 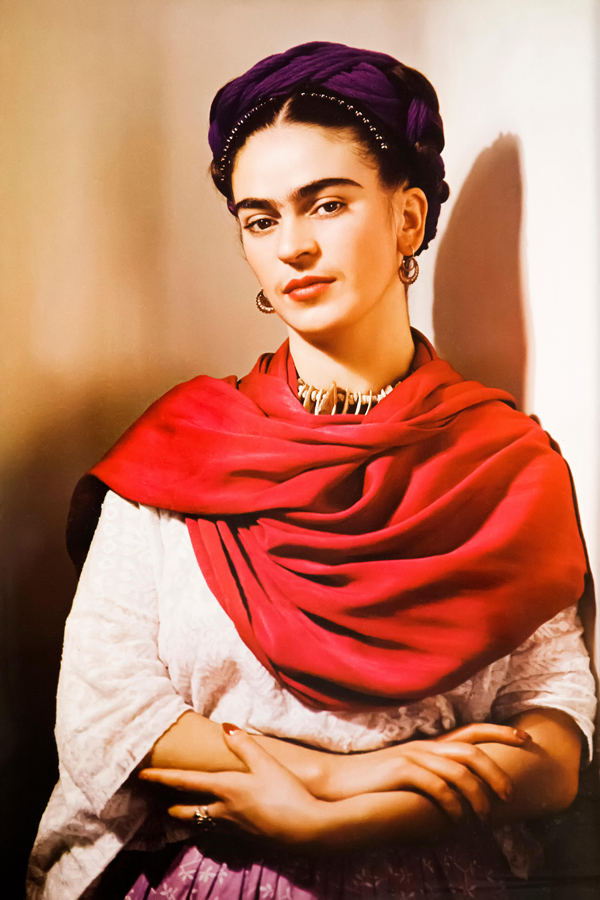 Born near Mexico City in 1907, Frida Kahlo caught polio aged six, which left her with a limp, then as a student she broke her pelvis and spine in a horrific tram crash. She faced repeated gruelling operations for the remainder of her life. However, she transmuted her misfortune into fierce, powerful art that still moves us today.

Frida’s self-portraits exhibit her stunning wardrobe and her famous facial hair: she was said by some to purposely darken her monobrow and ’tache, which she celebrated in opposition to the ideals of hairless feminine beauty. Fashion may seem like the least profound element in her career, but it is deeply entwined with her other concerns – her sympathy with the oppressed and her efforts to celebrate the female experience in all its visceral glory. She was her art. She used her twist on traditional Mexican clothes to make herself feel stronger on days when she was in pain and to assert her identity as part of the top celebrity art couple of the time. On her death, her husband and fellow artist Diego Rivera locked her wardrobe and asked for its contents to remain hidden for 50 years. They were finally revealed in 2004, showing how significant her clothes were to her life, and are currently on show in the V&A museum in London.

Frida’s clothes displayed her exuberance and wit, her identification with the working class of her country and its traditions, and expressed her unique concept of beauty. Like her, you don’t need to be defined by the hyper-sexualised celebrity standards of attractiveness that bombard us relentlessly. You have the means to choose how and why you decorate yourself: to create your own style, to reflect your unique personality, to act as both armour and advert for yourself, and just for the sheer joy of dressing up.

This is an edited extract from What Would Boudicca Do? Everyday Problems Solved by History’s Most Remarkable Women by Elizabeth Foley and Beth Coates, which will be published by Faber & Faber on 6 September, price £9.99*